New Kids On The Block

We recently published descriptions of new genera and species of mostly rainforest katydids. Some are familiar to residents in the area because they see them around their lights at night and others are much less common. All are nocturnal, hiding by day and emerging after dark to feed and seek mates. 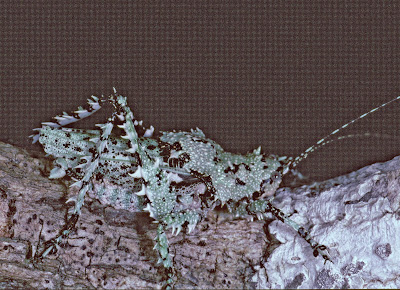 This unusual katydid was christened Lichenagraecia cataphracta Rentz, Su, Ueshima. This means, the "agraecia" that looks like lichen. The specific name refers to the spiny appearance of the katydid. This species has been known for a number of years from a few specimens from very disparate localities. Specimens have been found in ones and twos from Atherton, Speewah, the Cardwell Range, and the infamous Mt Lewis. It took considerable sleuthing to determine its relationships but we feel we hit the nail on the head.

Note the extraordinary adaptations of this katydid that give the appearance of a bit of lichen on a branch. The expanded spines are not just for decoration or defense. They probably also serve to "cloud" the fact that this is an insect that would be perfectly edible to a bird or lizard. Aside form the few specimens that have been found by interested naturalists, we have no idea where this creature spends its time. So that may explain its rarity. It may live high in the lichen-covered trees of its habitat. It may also be just "rare".

But I digress. What are its apparent relationships. 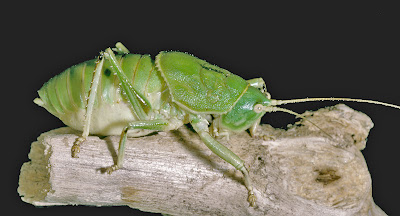 Meet an Armadillo Katydid, Armadillagraecia triodiae Rentz Su, Ueshima. This species occurs in the Halls Creek area of western Queensland where it lives on the desert in Spinifex (Triodia sp. ) bushes. If one discards all the obvious adaptations of Lichenagraecia, such as the spines on the legs and ornamentation of the thorax (pronotum) you have basically an Armadillo Katydid. We described three species in Armadillagraecia from Queensland and the Northern Territory. Another genus, Kapalgagraecia Rentz, Su, Ueshima was described from two species in the Northern Territory and Groote Eylandt. It is similar to, but quite different from, Armadillagraecia.


When the various morphological diagnostic characters are considered, such as the shape of the wing, which is concealed underneath the shield-like thorax, the shape of the male and female genitalic structures (yes, we look a the private parts!) it is apparent that these three genera form a distinct unit. We decided to formally recognise this by naming the tribe Armadillagraeciini Rentz, Su Ueshima. 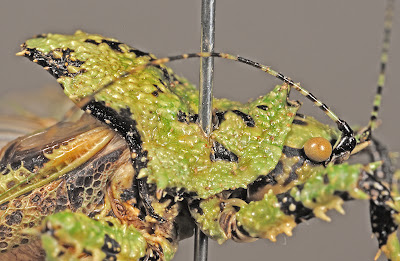 Pronotum of L. cataphracta. Note the similar shape to that of Armadillagraecia. 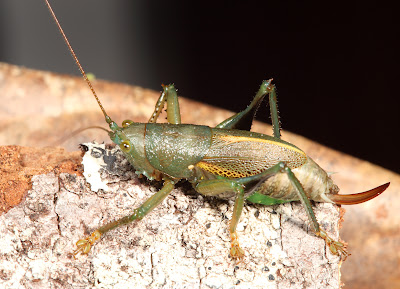 This is Ingrischagraecia iterika Rentz, Su, Ueshima, named in honour of Dr Sigfrid Ingrisch, world authority on agraeciine katydids. The specific name is derived from an aboriginal word for green, alluding to the colour of the insect. It and the remainder of the katydids in this blog are members of the tribe Agraeciini. This genus is monotypic, meaning that only a single species is known.
All known specimens of I. iterika are short-winged and flightless and are nocturnal.  They, like many  other agraeciines, are predaceous. Perhaps, they are better termed as opportunists. They will feed on a variety of foods depending on what is available.They can be observed eating on flowers, fruits or other insects. The ovipositor is suited to laying the cylindrical eggs in bark cracks. There is some variation in the colour of individuals. Most are quite dark olive. 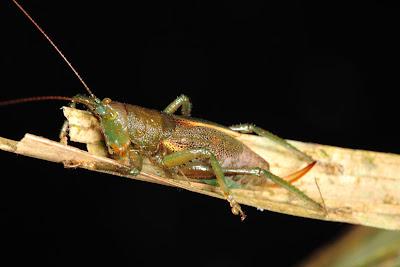 This female shows the greenish face of the katydid. A male of I. iterika munching on a cicada that had been attracted to the light sheet.

An young nymph (juvenile stage) of I. iterika.  To be certain of the identification, one needs to raise to maturity a small individual like this one. Being fairly catholic in their food preferences, they can be reared on a mixture of unprocessed muesli combined with flake tropical fish food. 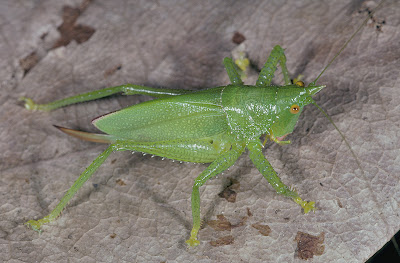 Another rainforest treasure is Emeraldagraecia Rentz, Su Ueshima. The derivation of the name is rather straight-forward. It is named for the colour of individuals of the species. This is a small but aggressive katydid with strong jaws that can deliver a painful bite if mishandled. The long ovipositor is used to insert eggs in cracks in bark.

Two species are presently known. E. munggarifrons Rentz, Su, Ueshima has a tongue-twister of a name. It is derived from a combination of an aboriginal and Latin word referring to the distinctive frontal bits of the insect.  The other is E. windsorana Rentz, Su, Ueshima, from the Mt Windsor Tableland, Qld. 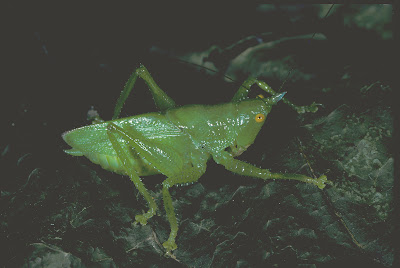 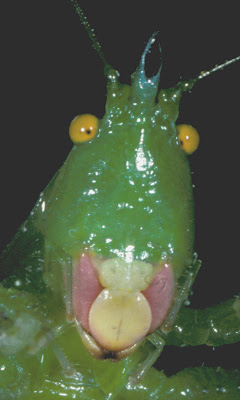 The front of the head of E. munggarifrons. This genus appears quite similar to Copiphora, a  genus of spectacular katydids from Central America. At this stage it is best to chalk up the similarity to "convergence" but further study may reveal close relationship and that the two should be combined into a single genus. 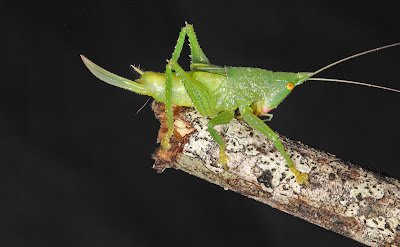 A last instar female of E. munggarifrons. The slightly separated two pairs of wings indicate that this individual is ready to moult and become an adult.

Another odd genus is represented by this little katydid with the minute vestigial wings accentuated by the yellow and brown colour. This is Miniagraecia Rentz, Su, Ueshima. Two species are known from localities from Mt Lewis, the Kuranda vicinity and the Atherton Tableland. The generic name refers to the small size of the katydids of both species.

This is M. milyali Rentz, Su, Ueshima. This is the rarest of the katydids we described. It seems to prefer large-leafed plants with soft stems such as gingers and aroids. During the day the katydids rest with limbs outstretched on the undersides of the leaves. This habit is deeply ingrained as they perform the same behaviour in captivity on any leaf, green or not. 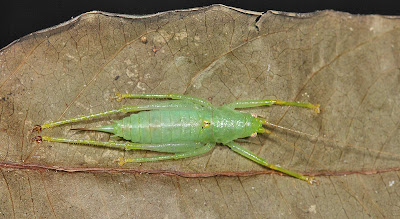 Resting female of M. milyali. Note the distinctive colour of the last two segments of the the hind tarsi. 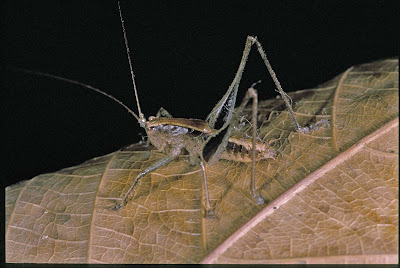 The last entries in this are in the genus Xingbaoia. This is the new species X. irvineorum Rentz, Su, Ueshima, named in honour of the late Tony Irvine and has wife Helen. Tony was a great friend and was an inspiration to many biologists in the north. This little species is a member of another subfamily, the Listroscelidinae, a very diverse group of predaceous katydids, large and small, that occur thorughout Australia. this species is known only from the Atherton Tableland, Qld where Tony and Helen lived for many years. It is presently recorded from Moomin and Mt Baldy where it lives on or near the ground in mixed vegetation adjacent to, but not in, rainforests. It feeds on small insects. 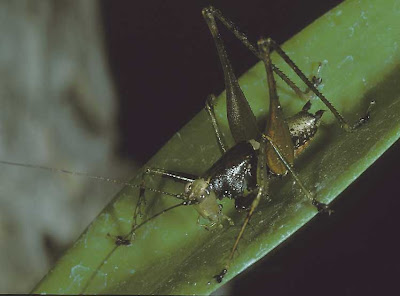 The only other known species in Xingabaoia is X. karakara. It is larger and more robust. It is a nocturnal rainforest katydid where it maraudes the undergrowth in search of small insect prey. I find it at my light sheet where it feeds on small insects. It, unfortunately, becomes food itself when Cane Toads, Bufo marinus, are about.

That's it for this offering.

What a great collection. The L. cataphracta is particularly striking, and so appropriately named!

That Lichenagraecia is amazing. What a great name for it too. Totally reminds me of Uroplatus sikorae.

Those are beauties. I collected a lichen mimicking katydid on top of a hill in the Chiang Mai Zoo. Your old buddy Dave Nichols at the SI asked if he could have it, so I gave it to him. The armadillo is charming.

Thanks for the comments folks. Mucho appreciated.

There's so much to do and so little time to do it!
DR

The word I'm looking for here - is awesome!

Hi David, a very friendly Katydid has become a kind of pet here in my Perth ground-floor unit.

This morning even when I was walking out the door it jumped on my leg. I also see it grooming itself almost like a cat, and also it is quite cute when it eats (though rarely, at least during the day). I've just been giving it some fruits and vegetables, tiny, tiny bits since it is so small.

Taken with the new iPad, a surprisingly handy macro tool.

It is a nymph, and maybe a Meadow Katydid of some sort? I wonder what exactly it will look like when adult.

Maybe you've seen it before, otherwise... enjoy. I can't find a picture of it on the Internet, at least a nymph version.

Also it seems to "chirp" randomly during the afternoon if it is fairly high up on a ledge or wall and fairly warm, like 26degC or slightly more. It doesn't really chirp much at night, some days it does, some days it doesn't.

So it is quiet most of the time, which is interesting.

Your katydid is an adult male of a species of Requena. You can see the tiny wings underneath the thorax. This is how it produces sound.

There are several species of Requena in the Perth area. i would suggest yours is Requena verticalis. It is common in Perth gardens where there are plenty of shrubs and a sandy soil.