A Most Unusual Grasshopper

Rehn (1952) in his classic work on Australian grasshoppers stated that "No considerable area of Australia seems to be without one or more representatives of the Eumastacidae...." Sixty years and more than 250 described species later, this statement is true. [Current classification of these insects
places them in their own family, the Morabidae] No other orthopteroid group seems to have radiated more than the members of the Australian endemic subfamily Morabinae. The "Matchstick Grasshoppers" have been successful in adapting to most habitats from the arid deserts to grasslands. They occur on plants near the ground and in trees like Acacia and Eucalyptus.

But one place you don't find morabine grasshoppers is in the tropical rainforest. They can be found on shrubs bordering rainforests but not within.

In the rainforests, members of the Biroellinae occur on shrubs and in treetops. They are not frequently encountered. They may be rare or just very difficult to observe. One genus is known: Biroella comprises many species from New Guinea but only two have been described from Australia. One is winged, the other wingless. But several undescribed species have been recognised. In about 14 years collecting in the Queensland tropical rainforest, I have only found a few Biroella.

Recently while night collecting along the Clohesy River, not far from Kuranda, a male of the wingless species was sighted on a leaf after dark. This is tentatively identified as B. tardigrada Sjostedt. With the highly localised nature of other morabid species, it seems that this could be an undescribed species as B. tardigrada was described from Malanda, Qld. from quite a different habitat from the rainforests along the Clohesy River. The species was described from a female and no males were recorded. This makes the task of determining whether the Clohesy River species is the same without having females for comparison. 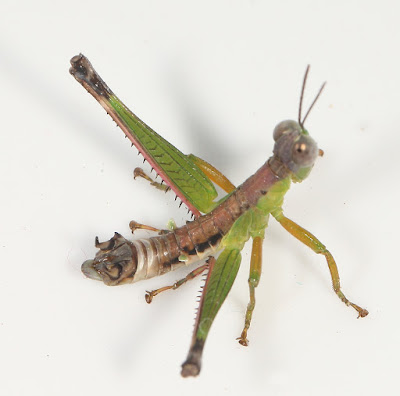 The splayed hind legs is very typical of most eumastacids and the biroellines, but not necessarily of morabines. This is an adult male.

But the interesting point about this discovery is the odd green flanges protruding from the sides of the abdomen.

These structures remain rigid after the death of the grasshopper. I have not seen anything of a similar nature on any other grasshopper. Certainly they do not occur on any morabine. What function they have, if any, remains to be discovered.

The cerci (claspers) at the end of the abdomen are also odd and a bit difficult to interpret unless viewed carefully. 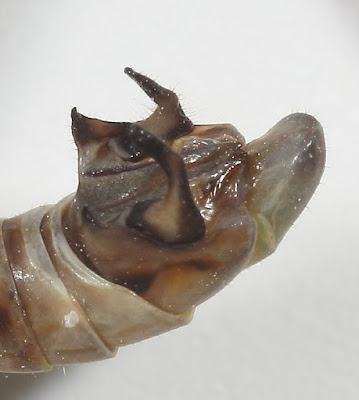 At first they appear to be C-shaped but the sharp corners at the base to the left are part of the supra-anal plate and not the cerci. The cerci are the erect slender structures with the dark, ovoid base.

This little observation highlights that there is so much about the Australian insect fauna that remains to be studied.

This has been a strange year in the northern tropics. There has been no wet season at all. A few showers here and there but nothing approaching a normal wet. To the west, there has been a few good showers that have greened up the outback but no monsoonal drops at all.

Insect populations seem to be unusual as well. A recent few nights in the Daintree resulted in huge hauls of insects at the light sheets. But these were of a few species represented hundreds of individuals. Daintree lightsheets are usually quite sparse. 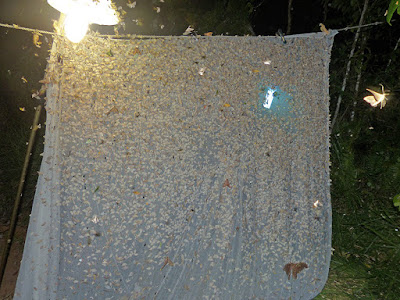 A lightsheet in the Daintree. Most of the moths represent a couple of species. B Richardson photo 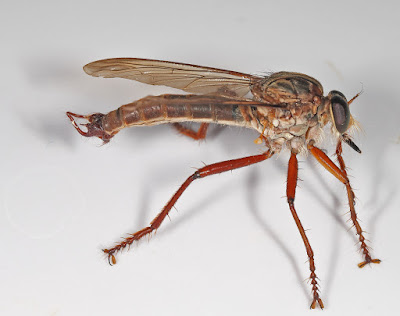 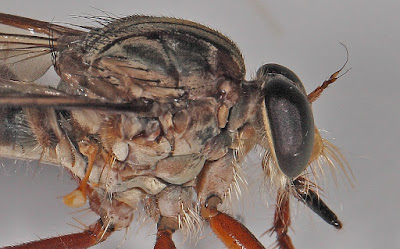 Robberflies are predaceous insects. They catch other insects, including robberflies, on the wing. Most species are diurnal, but a few Australian ones are active at night. These big fellows seem to prefer dark areas and will enter houses if doors and windows are left open. Their buzzing attracts attention but being a good Samaritan can result in a painful bite. The mouthparts are an effective syringe which conveys a concoction of painful chemicals. If they have to be handled, the flies can be dealt with effectively if grasped from the side, thereby, avoiding the beak coming into contact with the finger.
Posted by Mr. Smiley at 11:14:00 1 comment: