Cute now—But a Terrorist in the Making 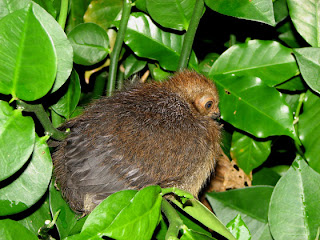 Cute now—But a Terrorist in the Making

Baby Brush Turkeys are not often seen. In fact, I had to show this to several well known “twitchers” before I could be certain that this was a newly hatched Brush Turkey. They are seldom seen because their peculiar biology is not conducive to their survival for long. In fact, it is estimated that only one in two hundred chicks makes it to adulthood. Reasons for this are simple. There is no parental care after the eggs hatch. The chicks are on their own. They can fly and run quickly but they are no match for snakes, lizards and predatory birds. Some must starve during dry periods. This one was perching about 50 cm from the ground on an exposed perch. One thing in their favour is that if they successfully attain adulthood, they will live for years. We have the same birds here that were here when we moved in about seven years ago. They learn to become tough and aggressive. They seem to hate everything and spend most of their time chasing one another or attacking goannas and the like. The ultimate
challenge came one day when the “Major Domo” ( our #1 male) started kicking sand and leaves into the male cassowary’s face as he fed. That was too much and a chase ensued, but the turkey was not to be denied and was soon back trying to steal a morsel.
Posted by Mr. Smiley at 13:56:00 3 comments: 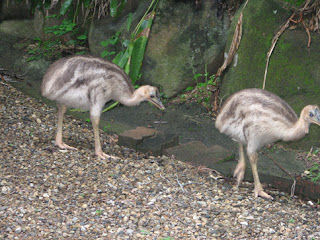 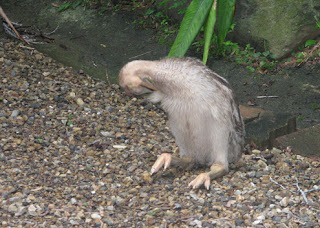 Cassowaries usually rest after feeding, presumably aiding in moving the food to the stomach. They sit down and put their weight on their elbows, with the tibiae often not in touch with the ground. Sometimes they tilt backwards as they doze. 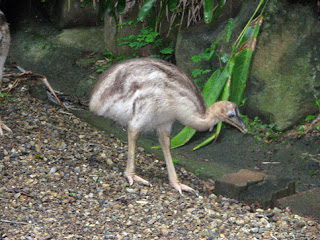 The last post on the Cassowaries was on 15 November. Well things are pretty much the same. There are still three chick and they are growing rapidly. They are approaching a ¾ of a metre in size, still have their stripes and are always ravenous. Some mornings they show up wet up to the neck indicating that they have had to ford the creek to get to our place. On a few occasions both the male and the female adult Cassowaries accompanied the chicks. On one occasion the male was with only one chick but the following day he had all three with him. Perhaps, the other two were with the female.

Always when the giant female is around, both the male and the chicks give way. She gets first preference to any foodstuffs. At this time the male usually makes low guttural sounds and approaches cautiously. He bellows loudly when he first arrives in the morning, supposedly to announce his presence and the fact that he and the bubs are hungry. 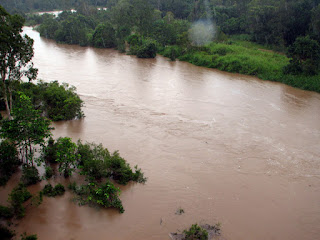 The Barron River at Kuranda Bridge 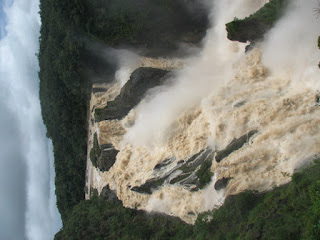 Every time it rains heavily in the Atherton Tablelands the Barron River turns a brownish or caramel colour due to run-off. Reasons for this are simple: poor agricultural practices on the Tablelands and “development”. Where does all this silt end up? Out on the Great Barrier Reef, of course. It’s a real tragedy. What more can I say?
Posted by Mr. Smiley at 13:21:00 No comments: