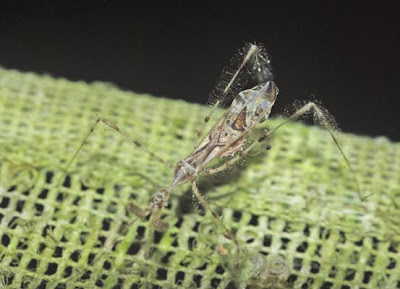 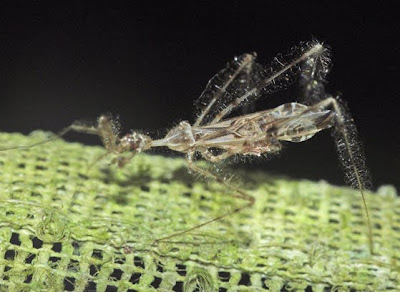 Emesines are members of the Assassin Bug family, Reduviidae. They are often very elongate and stick-like. They are characterised by having raptorial forelegs- like those of a mantis. This species shows up at the light sheet on rare occasions and picks off moths and other small insects. It is a rather small insect as you can judge by the weave of the sheet.
Posted by Mr. Smiley at 06:33:00 No comments: 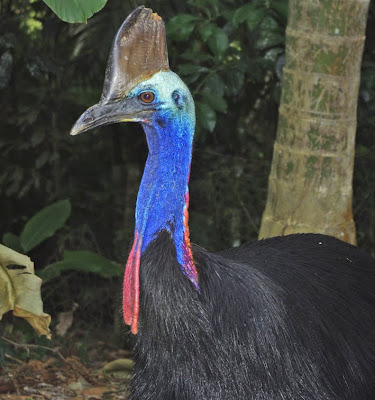 All the joy of the appearance of the latest batch of young cassowaries has suddenly come a cropper with Mr Cassowary showing up without any of his offspring. It seems some tragedy must have struck. Perhaps, the current drought was too much for the young chicks and they starved or they have met an early end at the hands of a goanna or python. Whatever, the entire clutch is gone and they will have to start again. Both the male and female Cassowary seem quite wary when they stop by.
Posted by Mr. Smiley at 06:24:00 1 comment:

You have probably read about the dust storms of recent days in Australia. Yesterday (24 Sept.) the dust arrived in Cairns, not far from here. There was little wind on the ground, in fact, in Sydney and Canberra there was little wind. The wind that carried the material was high in the stratosphere. But where does it come from? Some of the sources are agricultural fields. Others originate in river valleys where fine-grained sediment particles are being picked up by the winds.

What Caused the Dust Storm?
During the winter in Australia low pressure storms are generated in the Indian and Southern Oceans, whipping up huge seas (great for blackfish!) and creating severe cold fronts which sweep across southern and eastern Australia A severe thunderstorm with 100 km per hour (60 mph) plus winds formed in South Australia on Monday and began whipping up dust from the drought-affected outback regions. As the vegetations dries out, the topsoil is loosened, and it easily blows away. As the dust travelled into the eastern seaboard of New South Wales, which is in drought, it grew in size and by Wednesday morning was affecting most of NSW, the fifth biggest state or territory and representing 10% of the continent, and had descended on Sydney like a thick red blanket. Estimates suggest that during the peak of the storm, the continent was losing 75,000 tonnes of dust per hour off the NSW coast north of Sydney.

This is not entirely unusual. These storms happen every few years and have been occurring over the millennia, removing topsoil from the continent. This coupled with natural and man-made erosion make Australia one of the most infertile regions of the world. In brief, there is virtually no topsoil left. We are down to bedrock. This is precisely why the continent cannot sustain continued human growth. Resources are such that the carrying capacity for Australia is probably around 12-15 million inhabitants. Once we get over that number, problems arise. There is not enough arable land to feed such a population. Water resources, even with more dams, are limited as droughts are commonplace and “natural” in this part of the world. Recent estimations of the population increasing to 39 million in 40 years is really a doomsday prediction. Yet, the politicians see it as positive with their single paradigm “growth” being the sole measure of human development. How wrong they will be. 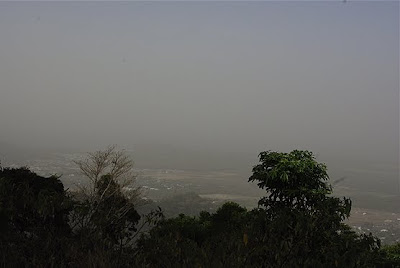 View of Cairns yesterday at 4.00 pm from Ross Lookout on the Kuranda Range Road. 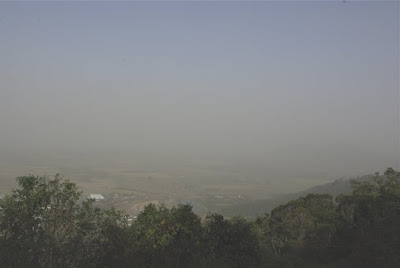