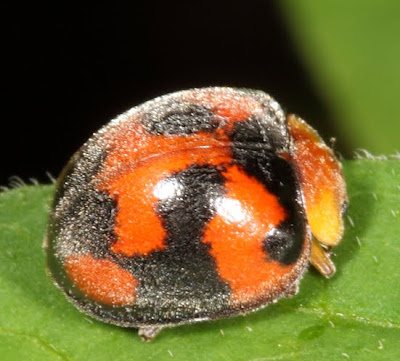 While out and about the garden I came across this ladybird. I thought I’d try to identify it, so I “googled” “Australian ladybirds” and came up with a wonderful site edited by my former colleagues Adam Slipinsky, Anne Hastings and Ben Boyd. By making comparison in the “Gallery” I quickly determined it to be Epilachna mjoebergi Weise. Further persistence in the site revealed that it was distinct from all others by not only its colour pattern and the presence of “pubescence” on its dorsum. Further reading revealed it fed on a variety of plants including the Solanaceae—I found it on a chilli plant! Still further I was able to determine that it was one of 10 species recorded from Australia and that some are pests. Plenty of references are provided on the site. All this information in less than 10 minutes of effort. Ain’t the web grand!

New Book: All about Ants

Densey Clyne has produced another one of her topical books. This one is about a subject that is familiar to every Australian. Most people know three things about ants: there are lots of them, thelittle ones invade our kitchens and the big ones have a nasty sting. But this book makes it clear that ants are more than just irritating pests. They are a vital part of the ecology; it is said that in Australia ants do the same job of aerating the soil as worms do in northern lands. But it is the fascinating behaviour of these ubiquitous insects, described in words and stunning pictures, that Densey Clyne presents to us in “All About Ants.” Aggressive and merciless hunters, yet among them are harvesters, seed distributors, shepherds of insect flocks and herds and guardians of grateful caterpillars. We learn the secret of lives of the fierce bulldogs in their underground caverns, the amazing desert honeypots, the tropical weaver ants and many others. After reading this book, you might never feel quite the same about ants.

The book is published by New Holland under the Young Imprint. It is expected to be available next month. 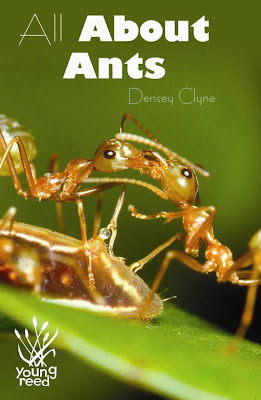 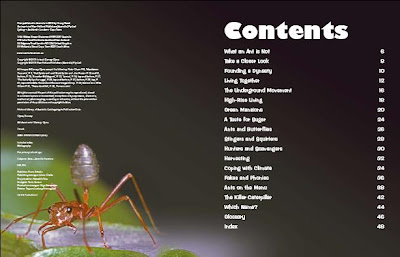 One of the big advantages for a gardener in the tropics is the opportunity to attempt to grow the weird and wonderful. Many members of the plants family Araceae the aroids or as Prof Herbert Baker at UC Berkeley called them “Man and ladies plants and 70 other names not repeatable in mixed company”! The elongated spathe is responsible for this situation! The family is widespread and most people reading this would have some as houseplants wherever they are. Philodendrons, Peace lilies, Monsteras, Dieffenbachias and Cryptocoryne aquarium plants are some popular examples. In the garden Calla lilies and Anthuriums are good examples. The Taro of commerce is an edible example but these plants usually are rich in oxalic acid and generally it is not a good idea to eat them without special preparation. [However, the Brush Turkey is unaffected in this respect. But it may be the reason that the birds have such caustic personalities. These birds can dismantle even the largest of aroids, maybe not at one attack, but over time they can reduce the plant to shreds.] Believe it or not, the closest relatives of this group of plants are the Duckweeds, formerly Lemnaceae, now a subfamily of the Aracecae. That’s right Jim! So in this family you have members with one of the world’s smallest flowers and others with the largest. But I digress.

Dracontium in a pot. Seems s bit cruel for such a large plant to be potted in such cramped surrounds. But the corm is really small compared to the rest of the plant. The stem is hollow. 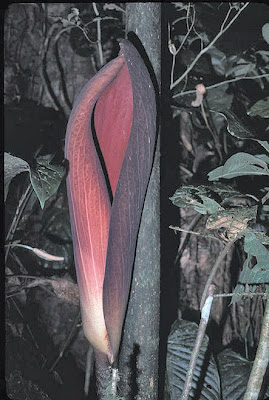 I photographed this wonderful specimen of Dracontium sp. at Finca La Selva, Costa Rica in 1969!

One of the most interesting aroids, and one that has caught on the Cairns region are members of the genus Amorphophallus and their close relatives. Yes, you read right. Looking like a misshapen phallus is the literal translation of the genus name. These plants are spectacular for a number of reasons. From a small corm you can often get a most spectacular result. Not only are the flowers weird and wonderful, but the green portions are equally stunning. The flower of A. titanium can reach 2.5 m high and be 1.5 m in width, fancy that. All of these plants have habits that are as interesting as the flowers. Most have a disgusting smell that is meant to attract flies or beetles that effect pollination.

When A. titanium flowers, it’s a big deal. The group below is viewing a flowering plant in Brooklyn! 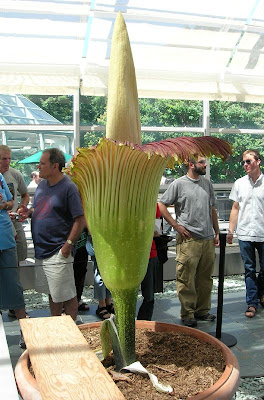 Australia has a couple of Amorphophallus species that appear to occur here naturally, at least many botanists think that’s the case. These occur mostly on the Cape York Peninsula. The Elephant Foot Yam, A. paeoniifolius (Dennst.) Nic. has been found on northern Cape York. It is easy to grow and is not very big but provides a most spectacular flower. It grows throughout south Asia and probably gets moved around through human commerce. The roots may be edible. 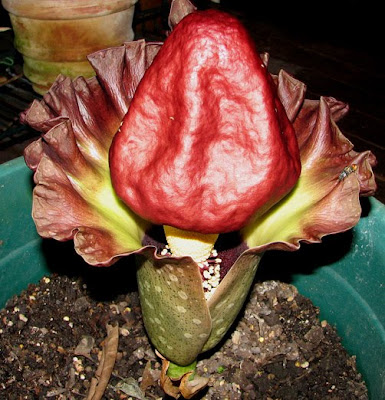 Amorphophallus paeoniifolius. Note the blowfly to the right. It has been attracted by the opdour and thinks it's close to blowfly heaven. 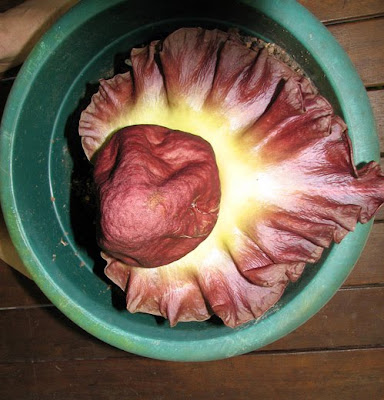 A. bulbifera gets me every year when it flowers, especially if I am unaware that one is in flower. The flower sets off an odour similar to that of LPG gas. I always think a rat has punctured a gas line until I find the flowering culprit. Interesting plants and well worth growing. Even the big ones do well in pots. this is not a native species and should br grown with care as it seems to have “weedy” tendencies in suitable habitats. 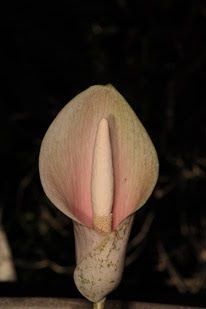 A. bulbifera, a very easy plant to grow but it has weedy tendencies. Not known to occur naturally in Australia.
Posted by Mr. Smiley at 15:55:00 3 comments: 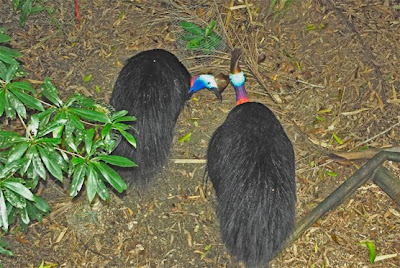 Since the early disaster of the local Cassowaries losing their 2009 batch of bubs, the male and female have been coming twice a day for handouts. The male is always wary of the female and keeps his distance, always giving way if a morsel of food is up for grabs. It seems that once a batch of babies meets its fate, the adults go without for the entire year. We had thought that they would try again, but that has not been the case up to this point. Now with the wet season well under way, will see what develops.
Posted by Mr. Smiley at 13:10:00 3 comments:

Plumes
There is a group of little moths that have their wings modified in such a way that they aqre like plumes. The Pterophoridae (Plume Moths) are the best example because there are many species and they are often common. Some like the Artichoke Plume Moth of California can be very damaging to artichoke crops if numbers of the caterpillars are abundant. Conversely, that is exactly what is desired from Lantanophaga pusillidactyla, a little moth that has been used to attempt to control Lantana, Lantana camara, a garden plant that has gotten out of control on a number of continents causing great damage by overtaking adjacent vegetation and literally smothering it to death. 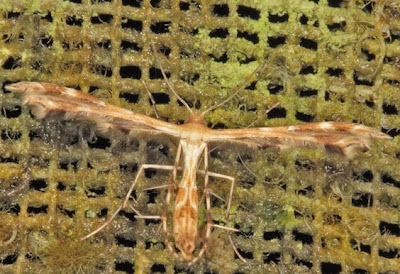 A Plume moth. There are many species in Australia and the group needs a taxonomic revision. 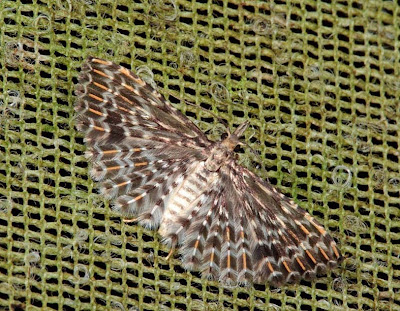 Alucita phricodes is a member of the family Alucitidae. Closely related to the pterophorids, the alucitids are represented by about a dozen species in Australia and only about 150 worldwide. The larvae form galls or live in flowers or fruits. They never seem to be common. There is a characteristic behaviour that the adult performs on landing. 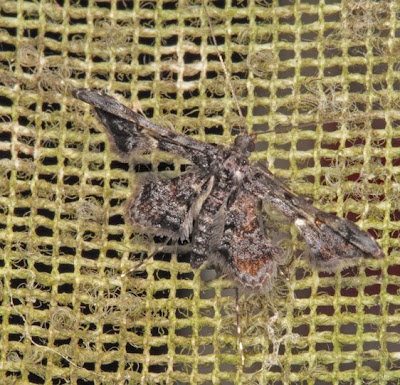 The peculiar moth above may be a tineodid (Tineodidae). There are only about 12 species in Australia and little is known of their biology. Perhaps, a reader may inform us on this moth.
Posted by Mr. Smiley at 12:45:00 No comments: 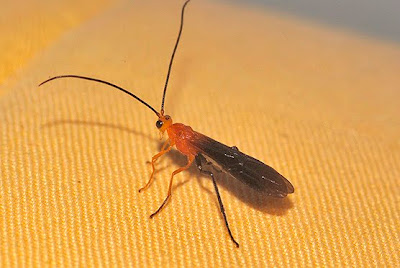 A braconid wasp that is obviously a member of the "Red-head Mimicry Ring". 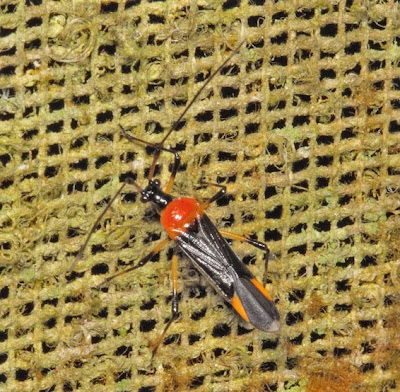 This mirid bug seems to be a member of the group. But to see a similar but different complex check p. 19 of the reference below.
If you look a the Love Bug flies in the blog below and then have a look at the photos presented here you'll quickly see that there is some similarity among them. They are from completely unrelated families of insects but they share the bright orange thorax. These insects are part of a Mullerian Mimicry Ring. They are part of an intricate advertising program. We may only be seeing a few examples of this group. There may be other insects, and even other invertebrates that share the dark black body and the orange thorax over the larger geographic range of the species involved. At least one species provides a "model" and the model has some feature that is distasteful or dangerous to vertebrate predators. Usually this is a toxic secretion that would either make the lizard or bird sick or at least have an unpleasant experience. Once the predator has had the experience, it learns to recognise the colour, pattern and posture of the model and avoids it and similar-looking creatures. Thus other perfectly edible creatures have evolved similar colours and patterns and are themselves "protected". Of course, there has to be a balance maintained in that the model must be more common than the mimics, otherwise the cover would be blown.
From the way the Love Bugs spend the day on the vegetation unmolested, I would suspect they are unpalatable. The little Snellenia moth below is probably quite edible but must gain some protection by being similar to the Love Bug in size and colour pattern. The mirid may be somewhat toxic as many bugs harbours nasty juices that repel predators. This would add to the overall effectiveness of this mimicry ring. The braconid wasp would be a good model in this situation. It possesses a powerful sting that could well incapacitate a small lizard or bird. A similar bug , moth and wasp have been nicely illustrated by Zborowski and Edwards (2007) in their recent book. 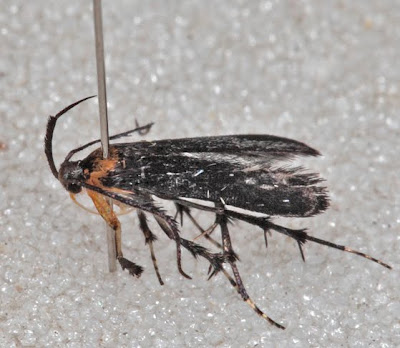