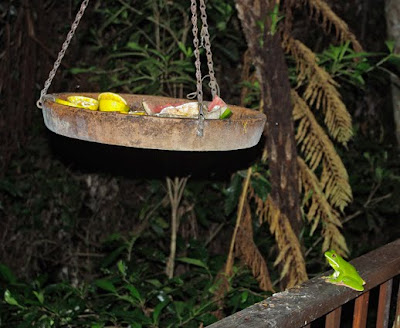 The fluttering of the fruit moths was a bit much for this White-lipped Treefrog. He sat there for more than a half hour. Then the Striped possum showed up and started to defend the feeder noisily threatening the frog. After a while the frog disappeared making me wonder if it had been eaten by the possum. It seemed a bit too large for that scenario. It was as big as my hand. 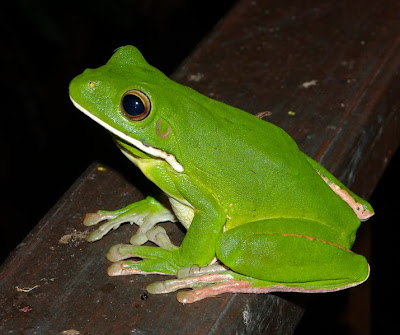 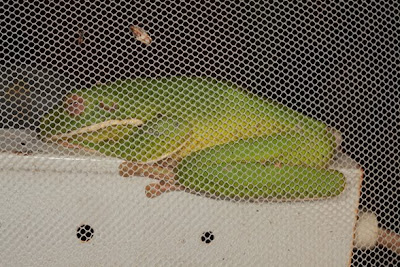 But alas, the next morning the frog (I assume it was the same individual) was strategically perched on top of the black light fixture where it is warm and provides the frog with a "box seat" for incoming insects.
Posted by Mr. Smiley at 05:55:00 2 comments: 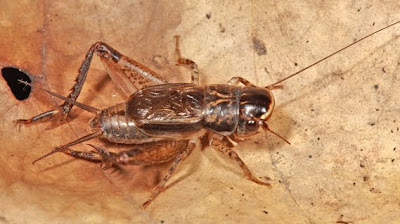 This is an example of a large genus of Asian and African crickets found living on the ground in leaf litter. Loxoblemmus crickets can be found in rainforests or in mixed woodland. They are often common and heard singing after dark. In their book on the Australian Crickets, Otte and Alexander (1983) list two species in the genus from Australia. 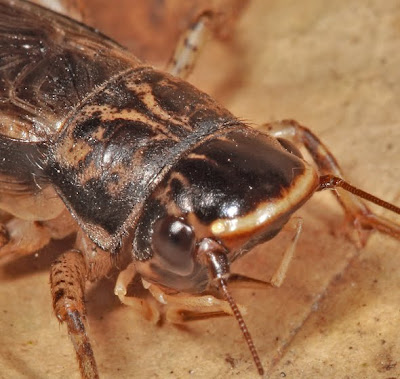 This species, L. pallens (Serville), is found only in Australia where it has a patchy distribution along the cost of Queensland north of Bundaberg. At times it is relatively common. Both sexes are short-winged and cannot fly. We found a population in some native woodland north of Mareeba, Queensland. Males have a pronounced hump between the eyes.
Calling Song of the Hump-nosed Cricket, Loxoblemmus pallens.

Oscillogram of the calling song of the hump-nosed cricket. The song is a continuous chirp broken at rather regular intervals.
Reference
Otte, D., Alexander, R. D. 1983. The Australian Crickets (Orthoptera: Gryllidae). Academy of Natural Sciences of Philadelphia. Monograph 22. Pp. 1-477.
Posted by Mr. Smiley at 16:24:00 3 comments: 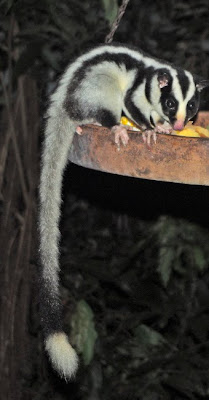 Striped Possum
This is the Striped Possum, Dactylospila trivirgata; Petaluridae, an infrequent visitor. It is larger than a squirrel and somewhat smaller than a small cat. 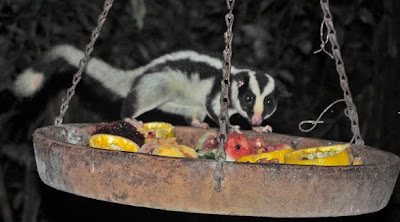 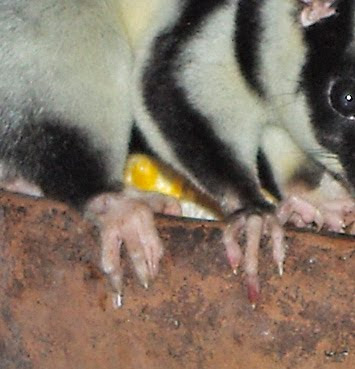 It is peculiar in that it has the fourth finger modified into an elongate probing tool. It uses this to pry insect larvae from underneath bark.
It is said to be an insectivore and maybe it was attracted by the moths seen in the blog below. Not much is known about this species so it may be eating some of the fruit as well.
The Striped Possum occurs in rainforests and adjacent eucalypt woodland on the east coast of the Cape York Peninsula, Queensland and north to New Guinea. 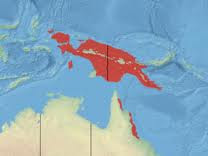 These possums have a powerful, unpleasant smell they emit when threatened. Fortunately, this fellow seems to like our place and has never given us the "juice". It is said to be noisy. I hear growls and chattering from the tree tops at times and this fellow may be the culprit. 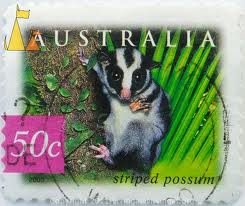 The attraction of certain moths to fruit has been noted before in this blog. It is always a spectacular site to approach the bird feeder in the dark and see the sparkling eyes of a bunch of large moths. You can do it yourself and see what you get. In different parts of the world, yo can expect very different moths.
Orchardists know these moths because of the damage they do to ripe or near ripe fruit. 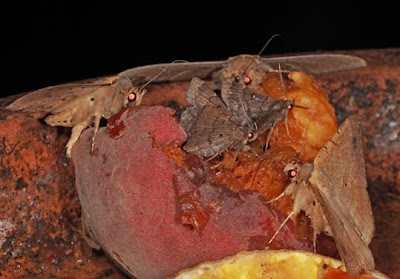 A group of noctuids feeding on rotten fruit at the bird feeder. 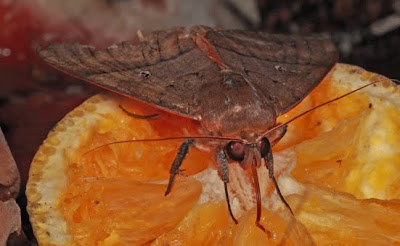 This noctuid moth has its proboscis well inserted into this orange. 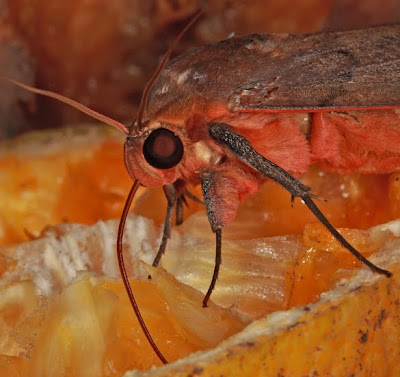 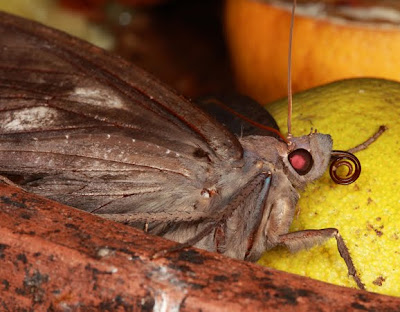 The coiled proboscis of a noctuid moth. 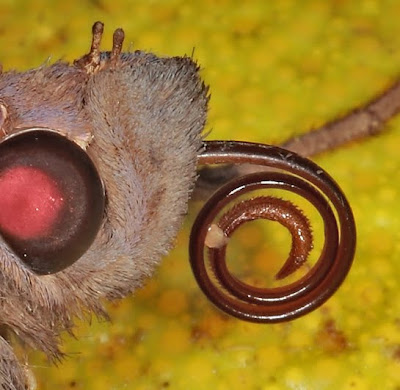 This is the "business end" of the moth's proboscis. It is serrated and clothed with stiff hairs. The action of the muscles of the feeding tube allow the moth to pierce the skin of the fruit and commence feeding. Although the moth will not eat much, the damage it causes to the fruit is by exposing the flesh of the fruit to fungi which will invade and discolor the fruit almost immediately. The cos to the farmer would be enormous were this to go unchecked. The large nets you see over orchards and individual trees limit this damage. 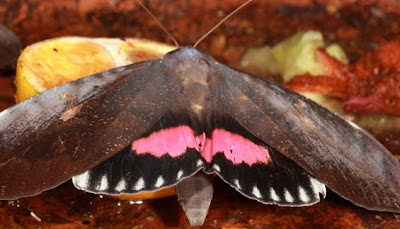 The Imperial Fruit-sucking Moth, Phyllodes imperialis, is impressive in size and colour. The larva is just as spectacular.
Posted by Mr. Smiley at 13:53:00 No comments:

A Southern Frog with Northern Connections 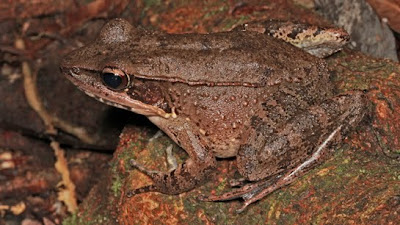 The Wood Frog, Rana daemeli, is the only representative of its genus in Australia. Rana is a large genus primarily off the Northern Hemisphere. Common examples are the Leopard Frogs, primarily R. fisheri, the Northern Red-legged Frog, R. draytoni, and the American Bullfrog, R. catesbeiana, a species originally from the Eastern US but which has been spread to other parts of the country and, because of its large size, has been exported to places like India where it is grown for "frogs legs", a popular food item. (I must admit, they are very nice should you ever have the chance to try them. I had them once at a Sydney restaurant!)
But back the the Wood Frog. This species occurs in the rainforest where it is abroad at night seeking insects. It has been seen around lights and smaller individuals must be eaten by large opportunistic Cane Toads, Bufo marinus. You can listen to the call of this frog on the website in the link.
Posted by Mr. Smiley at 13:32:00 No comments: 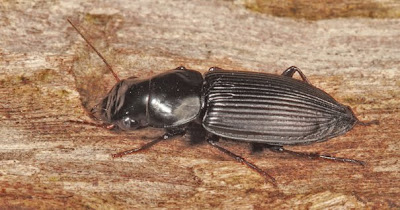 For the last month or so this Ground Beetle, Gnathaphanus phillippensis, has been everywhere. We find it in the rainforest as in the Mareeba-Atherton area as well. It is attracted to lights and has been seen in numbers in service stations, around street lights, in shopping centre foyers etc. It is an Australian beetle in the family Carabidae, the Ground Beetles, and probably is responding to the peculiar weather conditions we are experiencing this wet season. 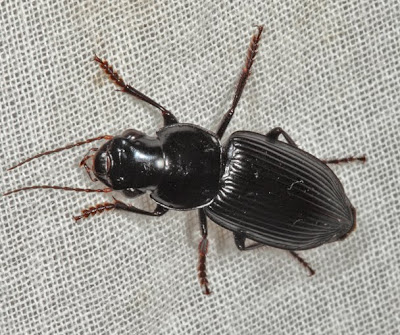 Gnathaphanus phillippensis on the light sheet. The beetles aggregate and remain together for a time.
Ground Beetles are usually predaceous and many have been used to control other insects. Whether the abundance of this beetles will have any effect on the local fauna is yet to be seen.
A nitidulid that lives in palm frond sheaths 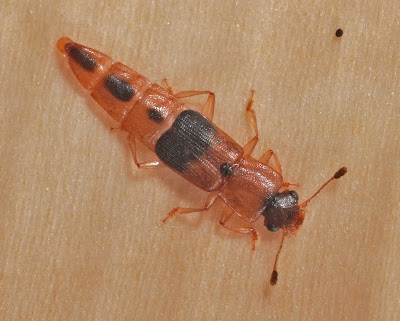 Whenever a palm frond falls, and that is often in the wet season, a look on the inside of the sheath usually reveals numbers of this colourful little beetle. It looks like a Rove Beetle but my colleague Tom Weir tells me it is a Sap Beetle, probably the genus Brachypeplus, family Nitidulidae.

Sap Beetles, family Nitidulidae, are small and usually not very colourful. Some species feed on pollen, fungi, vegetable matter; others live in bee's nests. I usually see them on decaying fruit in the bird feeder. Some nitidulids can cause considerable damage to stored dried fruit. But this species seems to live only under the palm sheathes where it is moist. As the fronds dry out, the beetles leave.
A Passalid Beetle
Passalid beetles are called Bess-bugs or Bess Beetles. About 500 species are known in the family Passalidae. There are 35 species in 9 genera recorded from Australia, (Hangay and Zborowski, 2010).
Bess-bugs have a distinct biology. Most species show parental care for eggs and young. They live in and under decaying wood and move around at night. They are infrequently attracted to lights. We find two species in the rainforests around Kuranda. This large one, 43 mm, and a smaller, more slender species about half that size. 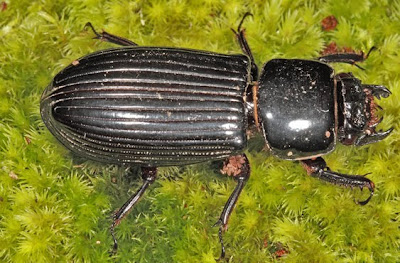 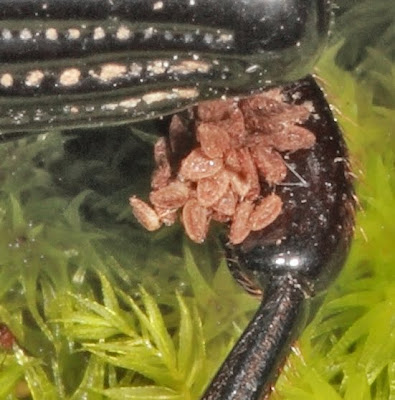 Passalid beetles often carry mites. Some individuals are literally covered with them.

Defensive scratching of a passalid beetle when held in hand. The beetle produces sound by "stridulating". That is, the sound is produced by a rubbing of the wings against the dorsal surface of the abdomen. The larvae can also produce a squeaking sound. Sound is probably important in keeping individuals in contact with one another as well as warding off potential predators.
Reference
Hangay, G., Zborowski, P. 2010. A Guide to the Beetles of Australia. CSIRO Publishing, Collingwood, Vic., Pp. 1-238.
Posted by Mr. Smiley at 15:52:00 No comments: 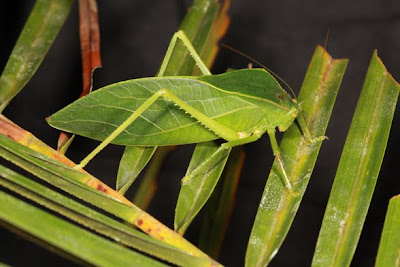 Meet Phyllophorella queenslandica Rentz, Su, and Ueshima, the Queensland Small Hooded Katydid. It was only recently described (see Rentz et al., 2009). It is a member of the subfamily Phyllophorinae of the large katydid family, the Tettigoniidae. 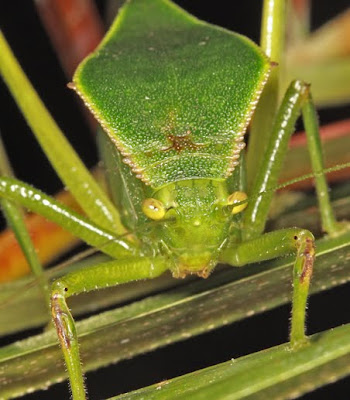 Hooded Katydids appear to be most closely related to Bush Katydids of the subfamily Phaneropterinae. They are plant feeders just like most of the Bush Katydids. 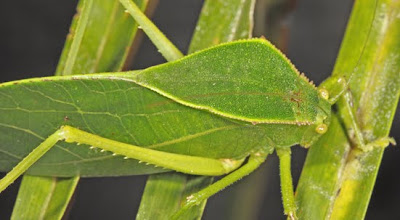 Hooded katydids are aptly named. The hoodlike thorax, called the pronotum, is variously developed amongst all the species. 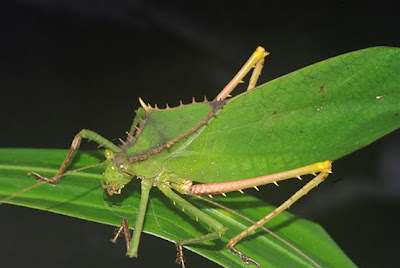 The Phyllophorinae are distributed in the Old World tropical rainforests with species known from the Indo-Malaysian or East Indian region. Twelve genera comprise the group. Some species are among the largest of katydids. The one above is a very large New Guinean representative of the genus Sasima.
Australia has two known phyllophorinae species, P. queenslandica and Siliquofera grandis, the latter a katydid of gigantic size. This giant is known from New Guinea as well as Iron Range in north Queensland. P. queenslandica is known from a few localities from Bamaga in the far north, south to Kuranda along the east coast.
The Phyllophorinae is odd in that males do not possess the usual katydid feature of a stridulatory file and scraper on the left forewing. This is the structure that produces the Calling Song distinctive of each species and important in aiding females to find their mates. How males and females get together in this group is yet to be studied.
However, they do produce a sound. When disturbed, nymphs and adults alike produce a rasping sound by rubbing a series of parallel transverse ridges on the sternum against a series of tubercles on the hind coxae. (See below) 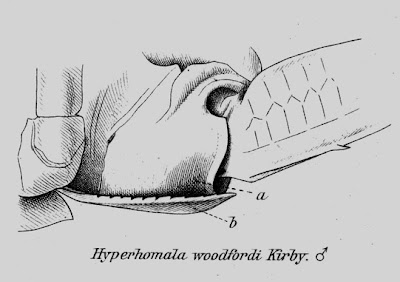