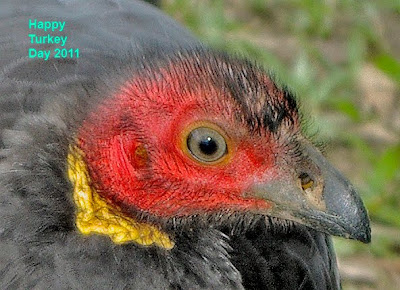 Recent attractions to the Light Sheet. 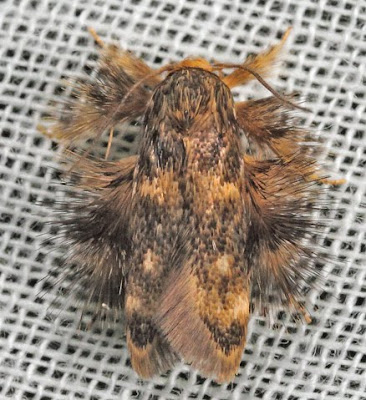 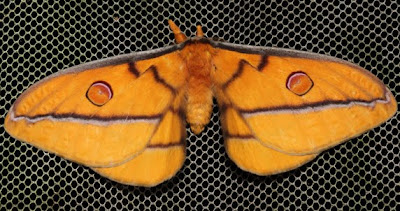 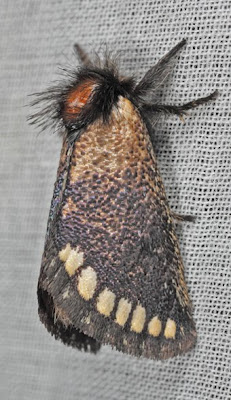 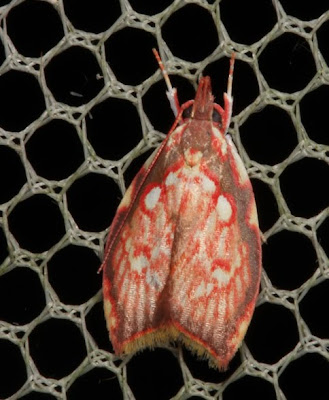 A species in the family Depressariidae 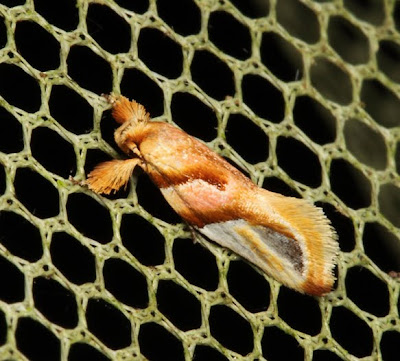 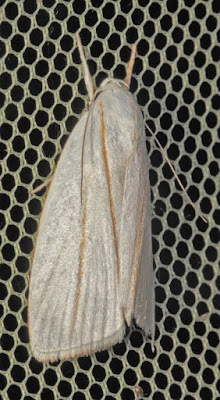 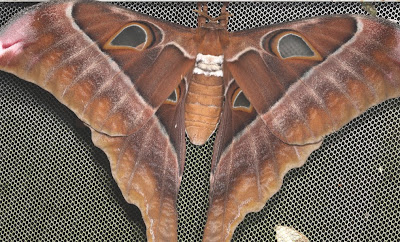 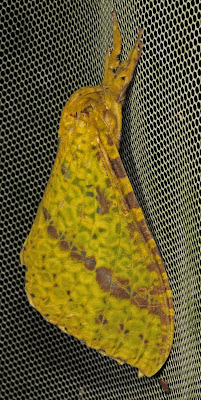 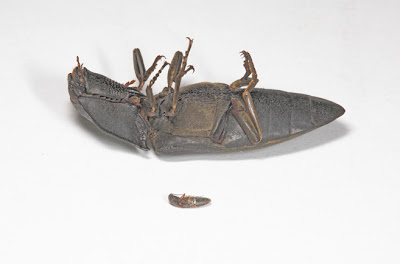 As a follow-on to the note on Click Beetles below, we have been deluged by large numbers of a small species. I suspect it is some sort of agricultural pest. There would be more than 50 at the light each night.
Posted by Mr. Smiley at 10:07:00 2 comments:

Return of an Old Friend 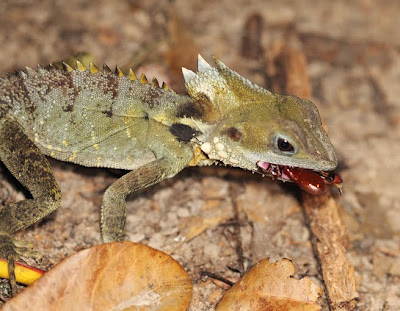 Boyd's Forest Dragon munching on a Cane Beetle at night in front of the light sheet.
I was startled the other night when I was in front of the light sheet looking up and something ran across my feet. It turned out to be the Boyd's Forest Dragon, Hypsilurus boydii. I'm sure it was the same individual written about previously in these blogs because he (or she) sleeps on the same branch as it did in 2007 when it was noted here for the first time. It has been 11 months since I have seen this lizard. I thought maybe it had gone to its eternal reward! 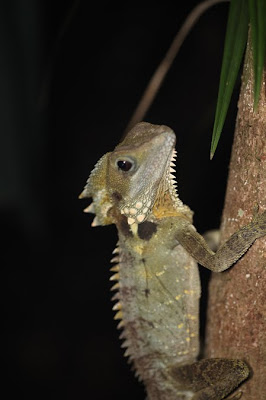 A typical pose for Boyd's Forest Dragon--on a tree trunk attempting to be unnoticed.
Posted by Mr. Smiley at 08:20:00 3 comments:

Nice Things About Living in Tropics

One of the nice things about living in the tropics is the opportunity to grow unusual plants. Of course, unusual plants grow everywhere but the tropical ones are so spectacular. 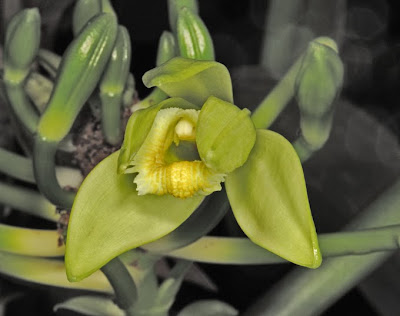 The Vanilla Orchid, Vanilla planifolia, is one such oddity. Yes, vanilla is an orchid. And you probably did not know that it originates from Mexico. It must be hand-pollinated and done promptly as the flower lasts only for a day. The high cost of vanilla probably is a result of this labour intensive activity. The "vanilla bean" takes about 6-9 months to mature and when it turns brown and starts to smell like vanilla, it is ready to pick
The Vanilla Orchid grows as a vine. It must be about 3m long in order to set flowers. It also requires that it eventually be trained to droop downwards to prompt it to flower. 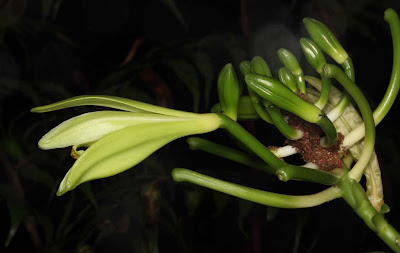 Flowers come in clusters and never fully open. There is considerable variation to the colour of the flowers. Ours are entirely green, others can have a yellow lip. 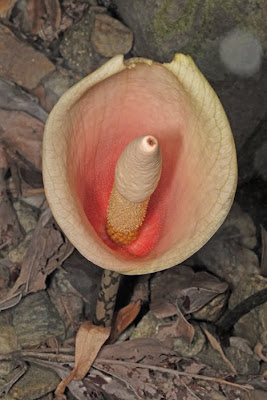 This is Amorphophallus bulbifera, Devil's Tongue Lily. I've written about this before but each year it is so spectacular that it deserves some mention. When it firsts flowers, it gives off an odour much like LPG. But this lasts for only a few days. If it gets pollinated by flies or other insects, it develops seeds. This plant has the capacity to spread as rodents , birds and some insect move the seeds about and they readily germinate. 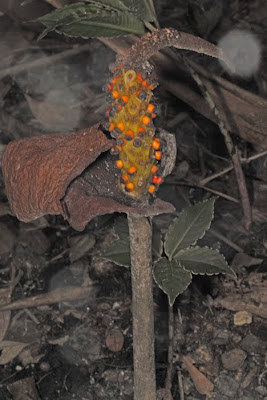 Denis Wilson noted that his lights were mobbed by the large saturniid moth, Opodiphthera helenae (White), the Helena Emperor Moth. At about the same time, we in the tropics, about 2000 km to the north of Robertson, NSW where Denis made his observations, had the same occurrence with a related moth, Syntherata janetta (White). The caterpillars of his moth feed on a wide range of trees but are most commonly associated with Gum Trees (Eucalyptus spp.)
Our moth is known from the Northern Territory and north Queensland south to central New South Wales. The caterpillars feed on a wide range of rainforest trees but eucalyptus is not one of them.
What could be the reason for the outbreak of these two moths at approximately the same time of year at localities so different and so far apart. Maybe it is associated with the phase of the moon (see the moon to the left!) or the fact that these moths emerge every spring at this time. Or, perhaps, the excessive wet period of last year was just what these species needed to provide abundant food plants that has led to the large numbers of adults on the move.
Below is a sample of males of S. janetta illustrating some of the variation distinctive of this species. Additional examples can be viewed on Buck Richardson's Kuranda Moth site. 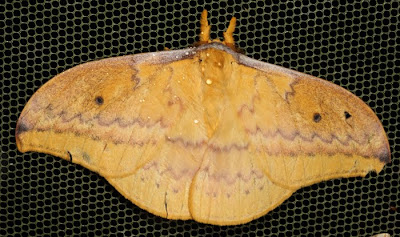 The most common colour morph of S. janetta. 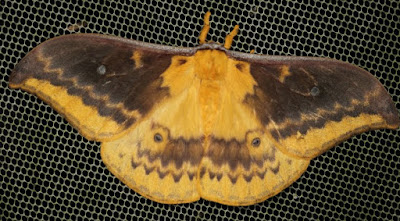 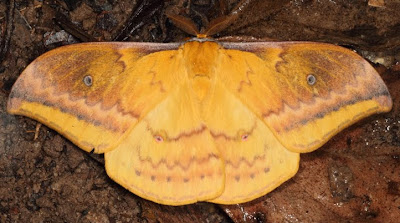 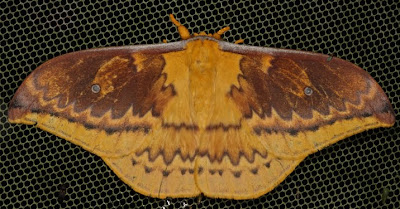 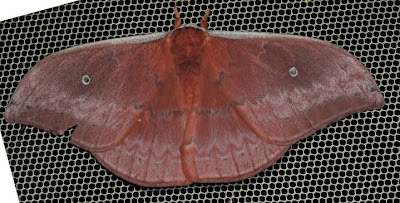 Unlike the Green Grocers seen in the blog below that are very precise when they commence their calling songs, the Four O'clock Moth may appear at 4.00 pm or earlier or later. 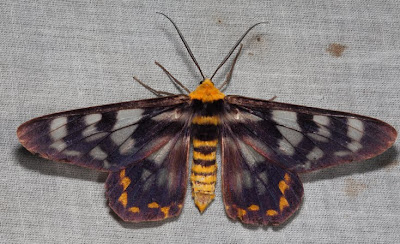 Dysphania numana (Cramer) (Geometridae: Geometrinae), the Four O'clock Moth
The seems an unusual geometrid moth and it is. It is a member of genus that has species in the Oriental Region as well as Australia. All are brightly coloured. D. numana is a large moth with some specimens measuring 8 cm across.
The caterpillars feed on a freshwater mangrove, Carallia brachiata (Rhizophoraceae) and on the leaves of Melicope elleryana (Rutaceae). The caterpillars are said to position themselves so that they resemble catkin flowers. Their bright yellow colours and the startling colours of the moth suggest that both caterpillar and moth are distasteful to vertebrates.
The Four O'clock moniker stems from the fact that the moths fly in late afternoon. However, on dark days they can fly earlier and well into the evening, hence the presence of this one at the light sheet.
Posted by Mr. Smiley at 10:52:00 No comments:

For the past few weeks each night at 6.42 pm (EST) large numbers of Northern Green Grocer, Cychlochila virens Distant, commence their deafening cacophony. The blast lasts for 15 minutes, then there is silence. Evening downpours do not deter these insects. Max Moulds tells me this will continue for weeks with the starting times beginning slightly later as daylight light lengthens. Starting times may vary with locality because Max in his book states these cicadas commence at approximately 7.15, or, perhaps, he made his observations much later in the season.
Its amazing that these big cicadas are so precise with their group calling song and they are all in synchrony as you can hear below. This species lives in lush rainforest in a very narrow distribution in the Cairns region along the coast and on some inland tablelands. 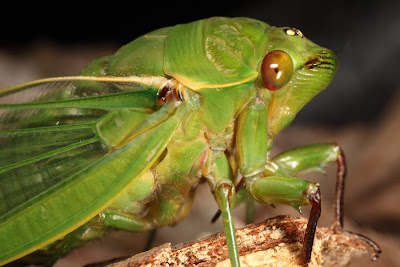