Insects on the move 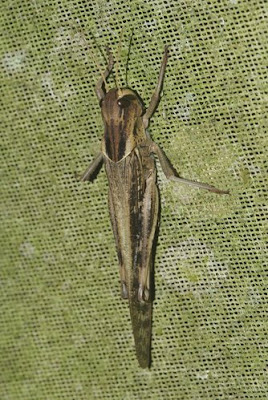 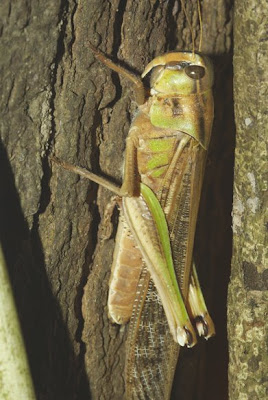 Two Migratory Locusts attracted to the lights in the rainforest at night.


Insects on the Move

Having the light sheet operating each night presents some phenomena from time to time. Late last week a single Migratory Locust, Locusta migratoria (Linnaeus) landed on the sheet. This large grasshopper is not an inhabitant of the rainforest and it is not the first time I have found them here. On the 15th of May 2005 one was found at the light and last week on the 15th of May 2009 another (a female) was also found. Last night 2 males and a female were collected. The females were in reproductive diapause. During the day I have seen a few more of the locusts flying in the open.

The Migratory Locust feeds on grasses and related crops such as sugar cane. These are the locusts that swarm in huge numbers in Africa. Their nocturnal movements have beenwell  documented. The presence of this grasshopper in the northern rainforests does not agree with the distribution maps of the Australian Plague Locust Commission  In our book A Guide to Australian Grasshoppers and Locusts, we show a considerably greater distribution of this locust in Australia than noted above. These locusts fortunately, do not cause the damage that they do in Africa and Asia in Australia. 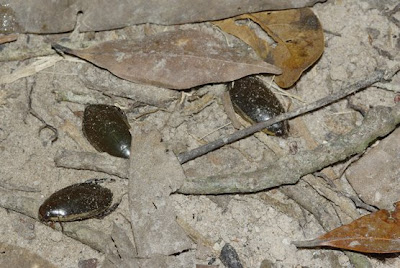 A few water beetles on the ground below the light. 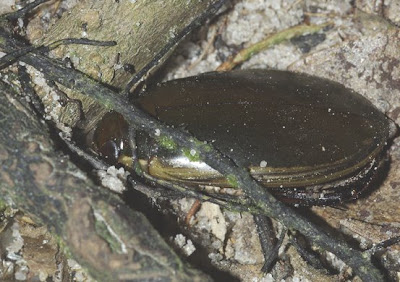 A single beetle taking refuge in the litter below the light. Perhaps, the beetle will fly off the following night.

Of related interest is the flight of the large dytiscid water beetle Cybister tripunctatus (Olivier) on the same night. Each year for one or two nights, large numbers of these beetles can be found at the lights of filling stations or at porch lights. I began collecting a few each year and placing them in my aquarium. They live quite peacefully with adult Australian Rainbowfish Melanotaenia splendida  and Purple-spotted Gudgeons Mogurnda mogurnda and, although they are large and considered quite predaceous, they don’t make moves on the fish at all. Perhaps, these species, which occur in the waterways in this area, have some chemical way of coping with the voracious appetites of the beetle. I can report that when cleaning the tank, the beetles readily bite my arm. They are often quicker than the gudgeons (what isn’t!) when a piece of meat is offered to the fish. The beetles are quick and swim off with it. The fish never attempt to capture the beetles. Indeed, the beetles are a bit too large for the fish to cope with and they do have repugnant secretions that are meant inhibit with such attacks.

The beetles that I capture at the lights live for at least a year in the aquarium and never attempt to leave. I guess they take one flight in their life and if they reach water, that’s where they stay. They readily eat flake fish food and will consume a dead fish. I don’t know the sex the beetles and have never observed any mating or egg-laying. Although the larvae of dytiscid water beetles are often called Water Tigers because of their predatory habit on fishes and other aquatic life, I suspect any young water beetle larvae would be consumed by my fish.

Now what is causing this movement of insects in the night? The moon is in the last quarter and the nights are clear and cloudless. I noticed that there were gyrinid whirligig water beetles also at the lights last night. As readers of this blog will note, we have a creek on the premises and the much larger Barron River is less than 1 km distant. I have puddled around in our creek after dark on a number of occasions and have not seen the dytiscids there. So the beetles may come from the Barron. I have seen them at lights in downtown Cairns indicating that they may fly considerable distances for whatever reasons.

There is a lot still to learn about the biology of some of our most common insects.

A friend from childhood days in San Francisco, Con Slobodchikoff,  has published a book that deserves some publicity. Prairie Dogs are an icon of the Midwest prairie ecosystem of North America, but as one might suspect, their numbers have been critically reduced in recent decades due to all the usual causes.

Con and his associates have documented many aspects of the biology of these communal rodents in an impressive book. Of interest to me as a specialist entomologist dealing with creatures that communicate by sound, is the interpretation of the sounds produced by Prairie Dogs. Just last year I had the privilege of seeing a population of prairie dogs that are being re-established on the plains of Wind River Ranch, Watrous, New Mexico. They are appealing animals with a highly developed sense of community and this book will introduce you to their world.

The book can be viewed and ordered from Con's website. 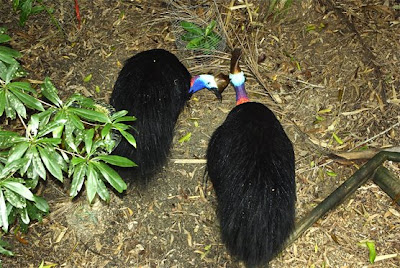 It is with great relief that we report the return of the Cassowaries to our property. We have not seen them since last August. Up till then, they were wandering through each day, sometimes more than once. We had all sorts of negative thoughts as to what might have happened to them. The worst case scenario was that they had been hit by a car or that the loose dogs in the neighborhood had chased them away. The latter seems quite probable as these birds are susceptible to attacks from dogs. They can handle themselves if confronted by a single dog but if more than one is threatening them, they are usually goners. Neighbours across the street pay no heed to the leash laws and their dogs are frequently on our property. Other residents have seen them chasing the Cassowaries. We hope to be able to report on their presence regularly now.
Seeing the pair together might suggest that the courting season is upon us. If this is the case, the male will disappear for about 6 weeks while he incubates the eggs and then he will emerge with the season's hatchlings. Let's hope........
Posted by Mr. Smiley at 14:23:00 6 comments: