You would think that by moving to the tropics one would be able to grow almost any orchid. Wrong. Where we live in the rainforest, there is not enough light to successfully grow most species. What you need in tropics is a cleared area where you can erect a shade house and control the light and the moisture. We chose to live in the rainforest without making many changes. So we are subject to the depredations of a great many creatures. Orchids seem to attract a number of insects that are intent on feeding on them.

Here are a few that occur in the Kuranda region beetles, moths, butterflies and katydids are the most common culprits. A beautiful butterfly, the Orchid Flash, Hypocaena danis (Fabricius), a lycaenid, is a great destroyer of orchid flowers. This native species attacks most orchids, native and introduced. Females are attracted to developing flower spikes, probably by some odour that the plants themselves secrete at this time. The female Orchid Flash lays an egg or two on a developing flower or along the spike. It never seems to lay more eggs than the spike can successfully carry. If on a developing bud, the egg will hatch and the tiny caterpillar will bore into the bud and then begin to feed. As the bud develops, so does the caterpillar and it eventually eats its way out and proceeds down the stem to other buds. If in flower, it eats the flowers and often assumes the colour of the flower itself, thereby concealing itself from potential vertebrate predators. 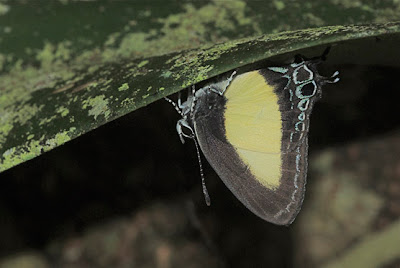 The Orchid Flash, beautiful but deadly to your orchids. 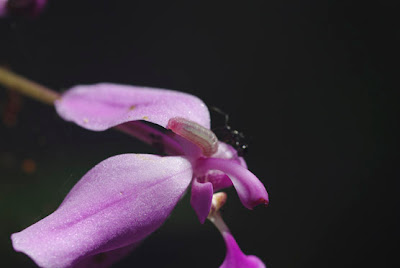 Larva of the Orchid Flash. This caterpillar assumes the colour of the part of the plant on which it feeds. The ant is "tending" to the needs of the caterpillar and receives sugary secretions for its efforts. Not a good association as far as your plants are concerned. 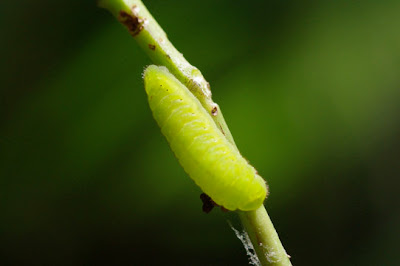 This caterpillar has been feeding on the green stem and leaves of the orchid. 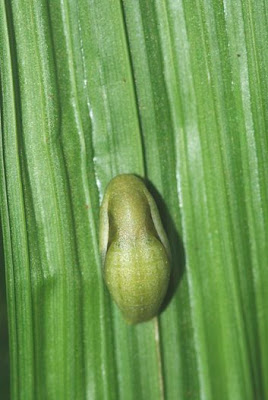 The pupa of the Orchid Flash. Once you find this, it's generally too late for your flowers. The caterpillar has done its damage. 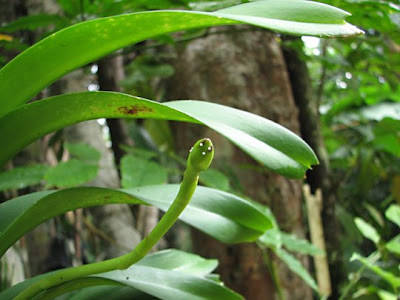 Eggs of the Orchid Flash. You can prevent the eggs from hatching by just scraping them carefully from the buds or using a light pyrethrum spray. Best to move the plant indoors or it will be attacked again.

Beetles
In the beetle department, several species lie in wait to attack your plants. They are all very destructive. the most obvious is the Dendrobium Beetle Stethopachys formosa Baly. Adults are brightly coloured. In New South Wales they are mostly black and orange. In Kuranda, we have both orange and yellow beetles. The adults feed on the flowers of Dendrobiums, their relatives and hybrids and other genera such as Cymbidium. The beetles are very active and fly when approached, soon to return to their destructive activities. The larvae are more insidious. They bore inside the stems where they hollow them out and eventually kill the stem. Any group of native Dendrobiums can be seen with yellow, dead and dying stems caused by the larval activities. The pupal cases of the larvae can be deceiving. The resemble chunks of Styrofoam, a substance used by orchid growers in their potting mixes. So they can go unnoticed and develop without interruption if you are not a careful observer. 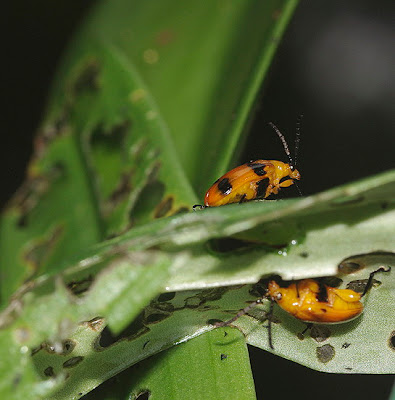 Dendrobium beetles feeding on flowers and foliage of a Dendrobium. Other species of orchids are also attacked. 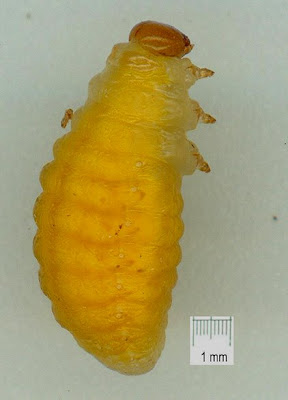 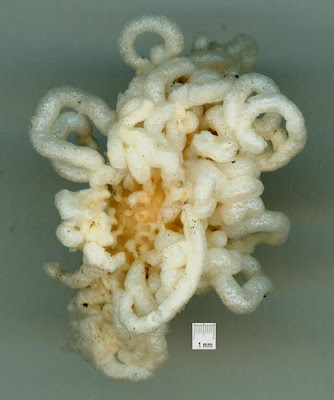 
Orchid weevils are very small and can easily go unnoticed. However, their damage can be very extensive and frustrating. One species, Orchidophilus aterrimus (Waterhouse) is the primary culprit. (see # 1 in the plate). This species is not native to Australia but was introduced and is often “shared” amongst orchid growers when plants are exchanged or sold. Prena (2008) states that it is native to Indonesia, Malaysia and the Philippines. Another species, O. insidiosus Prena, was described from “Australia” but from specimens taken in San Francisco from Sarcochiulus hartmannii plants sent from the Sydney Botanic Gardens. It may not be native to Australia according to Prena. Still another little weevil, Tadius sp, occurs in Queensland and is widely distributed in the Oriental region according to Zimmerman (1993: 138). Oberprieler (in litt.) states that this weevil (placed in its own family, the Erirhinidae) has been reared from Vanda orchids in the Northern Territory. He also stresses that the Australian National Insect Collection has very few specimens of any of these and he would be happy to receive them together with the names of the orchids on which they have been found. 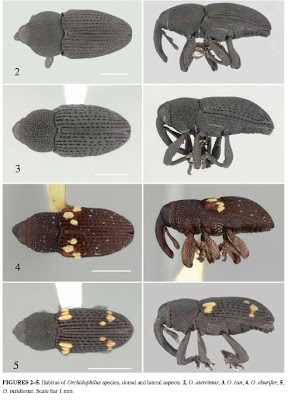 Orchid weevil plate from Prena (2008). O. aterrimus is shown in the top across. O. insidiosus is the bottom one with the spots.

Last but not least is the biggest, and potentially the most destructive “pound for pound”, of the insect pests of orchids in the Queensland tropics are members of the katydid genus Austrosalomona. Species of this genus occur up and down the east coast from Cooktown to Bateman’s Bay, NSW. In Kuranda, it is an undescribed species of the genus that is at fault. It does not restrict itself to orchids but will feed, at night, on flowers, fruits, developing shoots of a wide variety of plants. Because it its size and abundance, it can have a devastating effect on a small collection of orchids. 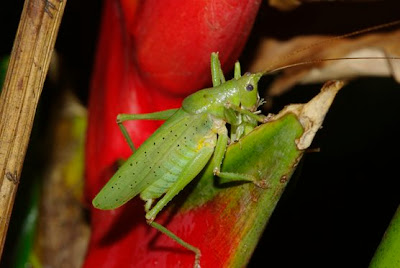 A male Austrosalomona sp. feeding on the flowers of Heliconia sp. at night.

Almost anyplace in Australia where orchids grow, cockroaches can be found in and around them. One species, the Orchid Cockroach, Shelfordina orchidae (Asahina) has been found in orchid collections in Canberra and its feeding activities recorded by Lepschi (1989). It is thought to have originally come from Panama! Its gut contents have contained fungi and pollen. The same species has been collected in the wild at Lake Barrine, Yungaburra and Curtin Fig., not far from Kuranda. However, cockroaches are often found in orchid collections but actual observations of them causing damage are few and far between. They may just find the potting mixture a convenient place to live and may just “graze” on the particulate material on the leaf surfaces after dark. More observations are needed. 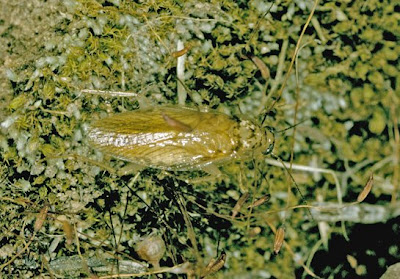 The Orchid cockroach. Many cockroaches of the family Blattellidae have a similar appearance and it's best to have your specimens identified by an expert to be certain that your have the genuine Orchid Cockroach. The common German Cockroach looks somewhat similar to this one but it is vastly different.

Other hazards to orchid culture in the tropics are Red-legged Pademelons (a small rainforest wallaby) and Brush Turkeys.

Acknowledgements
I would like to thank Dr Michael Braby for comments on the biology of the Orchid Flash. His books on the Butterflies of Australia published by CSIRO are a must for anyone interested in identifying Aussie butterflies. Graeme Cocks is thanked for some most fortuitous photos of the Dendrobium beetle larva and pupa. Rolf Oberprieler provided all the information quoted above on the weevils that attack orchids.
Literature Cited
Braby, M. F. 2004. The Complete Field Guide to Butterflies of Australia. CSIRO Publishing. Collingwood, Vic. Pp. 1-338.
Lepschi, B. J. 1989. preliminary note on the food of Imblattella orchidae Asahina (Blattodea: Blattellidae) Australian Entomological Magazine 16: 41-42.
Prena, J. 2008.  A synopsis of the orchid weevil genus Orchidophilus Buchanan (Curculionidae, Baridinae), with taxonomic rectifications and description of one new species. Zootaxa 1783: 18-30.
Zimmerman, E. C. 1993. Australian Weevils Volume III Nanophyidae, Rhynchophoridae, Erirhinidae, Curculionidae,: Amycterinae, Literature consulted. CSIRO, Melbourne, Pp. 1-854.