Even though we are in the midst of a very dry period, the animals are tuned into spring. The Cassowaries have lost their brood, perhaps, because there is not enough food of the proper size and nutritional content on the ground, or, perhaps, from predators. Once the rains commence, they will probably try again. The rest of the clan is carrying-on with business as usual. The Brush Turkeys have regained their splendid colours and are raking leaves down the driveway. The goannas were out and on the hunt as are the pythons. a great time of the year. 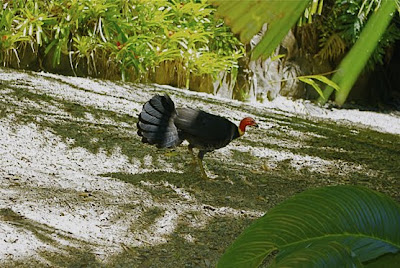 Mr Turkey sizing up the driveway for the annual leaf litter relocation. Of course, he never moves the stuff where it's practical. It seems to have nothing to do with his nest. We don't know where that is. The females are presently away, probably at the nest site where they will lay an egg each day or so. 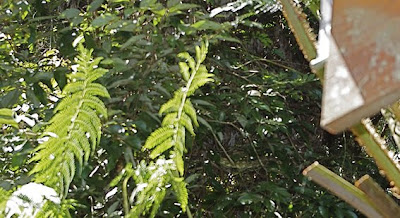 Look carefully! The Rufous Fantails and the Honeyeaters were creating a kerfuffle early one morning. A closer look revealed a Carpet Snake (python) in the distance. We got a better look when it twisted around to reveal its underbelly. 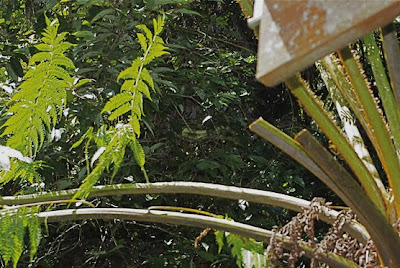 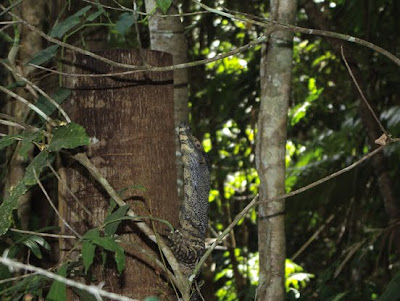 One of the Brush turkey's bitterest enemies is any large lizard but the big goannas attract their particular ire. They continually bite at the tails of the lizards as they search for the turkey nests. The lizards first react by curling their tails forward towards their head. Eventually this becomes too much for the lizards and they "tree" themselves, staying until the Brush Turkey tires of waiting for them to descend. Humiliating, but it saves the tail. Most of our larger lizards are missing the tips of their tails.
Posted by Mr. Smiley at 08:15:00 No comments: