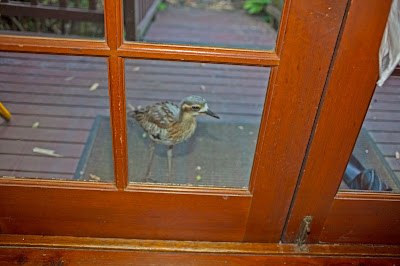 This is what greeted us this morning. It's fledgling Bush Stone Curlew or Bush Thick-knees, Burrhinus grallarius. Bush Thick-knees live in areas of open woodland or along rainforest margins where there is open ground. They frequent cemeteries, parks and roads in suburban areas. They even nest in hotel gardens or in planted grounds around hotels in Cairns. As adults they are about the size of a bantam chicken. They mate for life and do not venture far from their home breeding grounds. Once nesting is over, they often form small flocks of up to 20 birds. 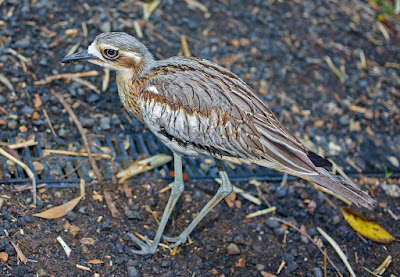 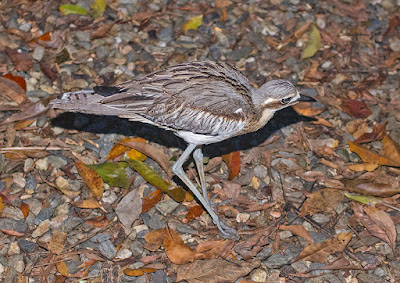 This little fellow, dubbed Charlie, was obviously raised by a wildlife carer and was unusually tame--and hungry. After a few phone calls Charlie was provided with a supply of mealworms and reunited with his or her carer for further rehabilitation before being released. 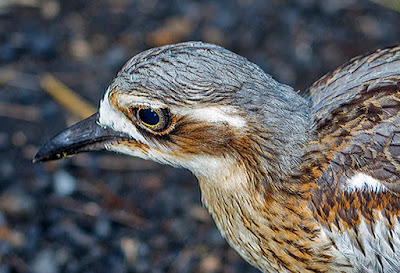 Charlie is a great example of an animal with protective coloration. Amongst leaves and gravel the bird is well concealed from predators. Nesting or resting birds usually remain motionless until the last minute when they erupt with a series of hisses and displays.

These birds are primarily nocturnal. Their distinctive calls can be heard nightly as they move about of fly up the roads in their habitat in search of insects. They overturn leaves and small bits of wood in search of prey. In addition to insects, they feed on small reptiles, frogs and crustaceans along with a small amount of vegetable material. These birds are a lovely part of the tropical environment.
Posted by Mr. Smiley at 11:10:00 3 comments:

Think of the complicated genetics involved in this example.

This is the SAME individual katydid from just after hatching to adult. 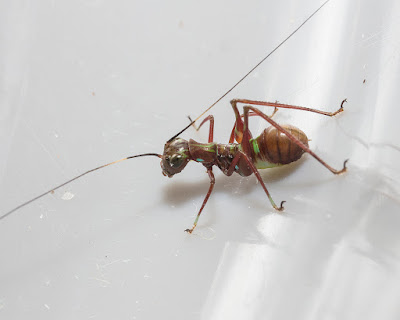 As a first instar nymph (fresh out of the egg) the little katydid behaves much as an ant or a wasp. The antennae flicker when it moves in a wasp-like fashion and its movements are jerky. 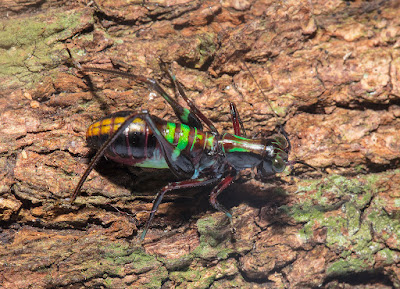 After a few moults the same katydid looks quite different. Note the difference in colour pattern and also the antennal colour is entirely black and does not have the white patch near the base of the antenna as is seen on the first instar. 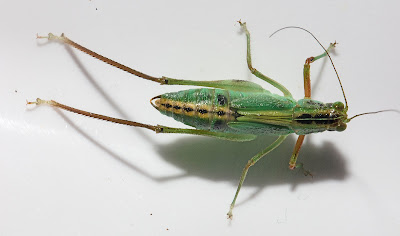 Remember, this is the same individual katydid as in the first frame. This is in its last instar stage, just before it moults into the adult. Almost everything about it is different and its behaviour is in now way wasp-like. The colour and pattern on the legs is different and there is not much suggestion of the black colour as seen in the early instars. Note the slightly separated wing pads. This indicates that the individual is about to moult into its adult stage. 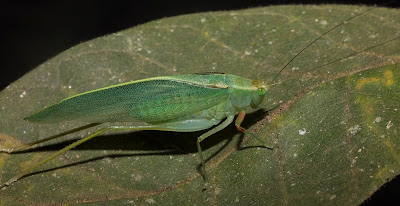 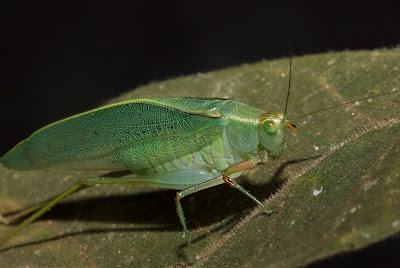 The adult! It's hard to imagine that this is the same individual at in the first frame after a few weeks time. Most of the intense colours are gone. Only traces of orange can be seen on the forelegs and the head. It continues its life amongst leaves and foliage of rainforest trees. This species bears a characteristic short black stripe on base of the dorsal pair of wings (tegmina). There are also a few scattered small dark spots on the tegmina.

So are there explanations for this scenario. It's diverse changes are not just happenstance in my opinion. The wasp-like or ant-like appearance and behaviour of the first instar may help it avoid being predated upon by lizards and birds when it is on the ground or on tree trunks. The mid instar appearance might be protective in the sense that it appears more like a piece of bark or leaf litter than an edible katydid. At this stage its movements are jerky and wasp-like. Later instars are probably on leaves during the day and the green colours and patterns conceal it. The adult is not unlike any of the more than 10 species of the Phaneropterinae that occur with it. The katydids are nocturnal and spend their time in foliage. They are vegetarians.
Posted by Mr. Smiley at 12:57:00 1 comment:

The three chicks are now two. We have no idea what happened to the third one but goannas, wild pigs and pythons are about. 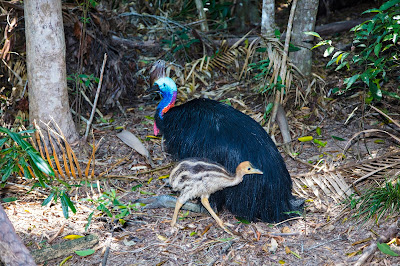 After a feed, males decides to rest. One of the chicks is still active. Notice that the chick is a bit on the skinny side. This is probably a result of the drought conditions that have resulted in a rather sparse supply of food for foragers. 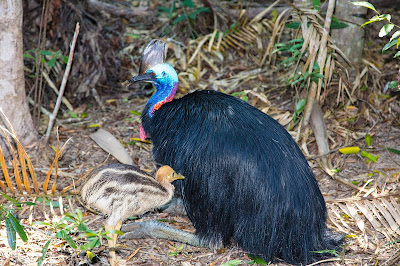 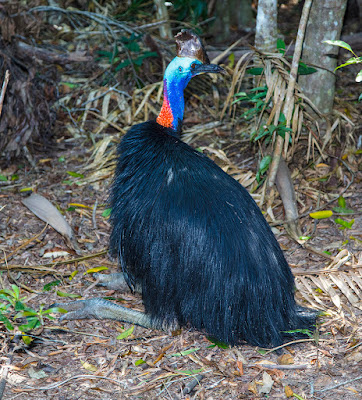 Both the adult male and his chicks often arrive wet. They probablybathe in the creek that is not far from our house.
Posted by Mr. Smiley at 12:48:00 No comments:

Recently the Friends of the Botanic Gardens in Cairns joined with the Friends of Sugarworld for a night explore of the grounds at Sugarworld. Sugarworld is a part of the Cairns Regional Council parks system. It was formerly an area where fruit tress were grown to test suitability to the Cairns area as well as trying different varieties of sugarcane to test its suitability to the Cairns climate. Following a change of direction, the grounds were turned over to the city for a park. Picnic facilities and spacious lawns provide a pleasant site for relaxation. Sugarworld is located in south Cairns in Edmonton. 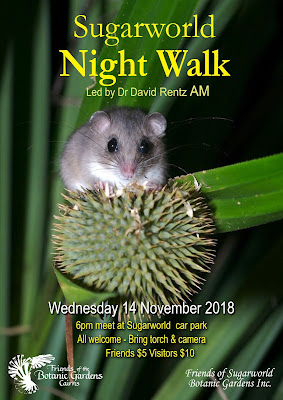 Many varieties of tropical fruit can be seen there. A number of large Raintrees and fig trees adorn the site. 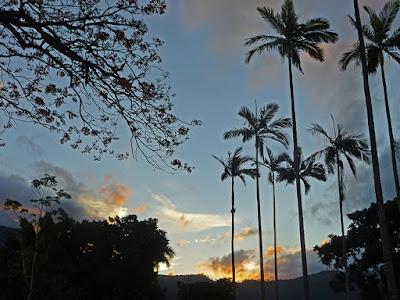 Sunset at Sugarworld  B. Richardson photo

About 100 people attended the night walk. We were expecting to see Fruit Bats in the trees and other mammals but it was not to be. A few Thick-knees Curlews, were seen along the margins of the park. But insects were, surprisingly, in sparse numbers on the light sheets. We found a number of interesting species by diligently searching foliage and leaf litter. This was a challenge but everyone opened their eyes and found a variety of insects and spiders. Most people were not accustomed to searching for insects after dark.

The most interesting find was a mass of sleeping bees. 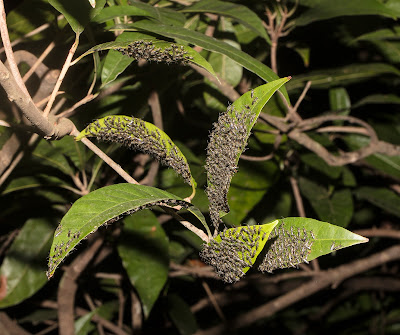 There were thousands of them assembled on leaves of various trees from about 2-3 m from the ground. 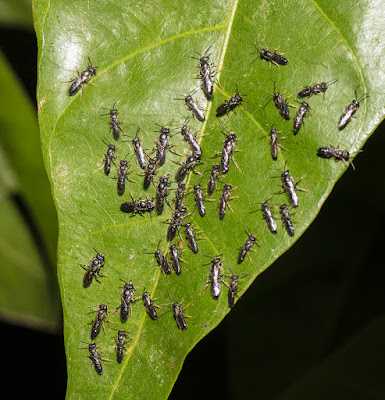 Ken Walker, Melbourne Museum, has identified the bees as members of the family Halictidae, Homalictus sp. but probably blackburni. He also notes that in the bottom photo all the bees are males and they are all aligned in the same direction for some reason.

Bees were not the only insects found in groups. This group of Assassin Bugs (below) was clustered on a tree trunk. Close examination reveals that some individuals are moulting on their way to adulthood. 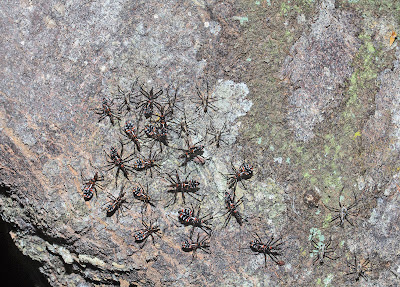 Assassin Bugs prey on other insects. Here the mass is probably conveying more safety to the group than one bug alone. Also note that they use the cover of darkness to moult. By morning, they will have hardened up enough to resume their predatory ways. 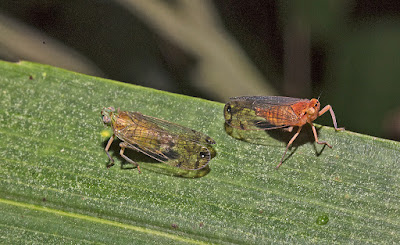 Courting fulgoroids on a palm frond 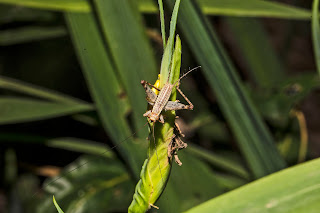 A young cricket, Cardiodactylus novaeguineae. This cricket will require several more weeks to develop into an adult. It is a large species that sings day and night and is easily observed on shrubby vegetation. 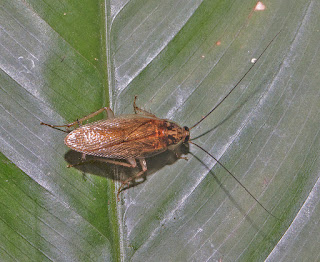 Carbrunneria maxi. This cockroach was very common in leaf litter and could be seen after dark on leaf surfaces where it gleans particles of food that rain down from the canopy. It is a native cockroach that could not survive for long in the house. The Surinam Cockroach, Pycnoscelus surinamensis. This is an introduced cockroach that is parthenogenetic, that is, females can produce young whether they mate or not. Females of this species produce live young. Males are rarely found. It is a useful species in culture since live births can be observed. This cockroach is pan-tropical in its distribution. It lives in leaf litter, potted plants and in leaves that accumulate in gutters. It does not live in houses. It has ben implicated in destroying some vegetables and as an intermediate host of parasitic worms that can infest poultry. 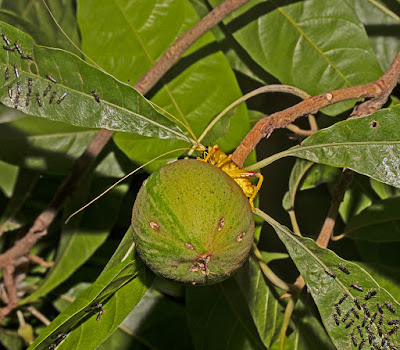 One of the many varieties of tropical fruit at Sugarworld. It is being visited by a last instar (subadult) nymph of a beautiful Raspy Cricket, Xanthogryllacris punctipennis. Note the sleeping bees on adjacent leaves and their orientation. 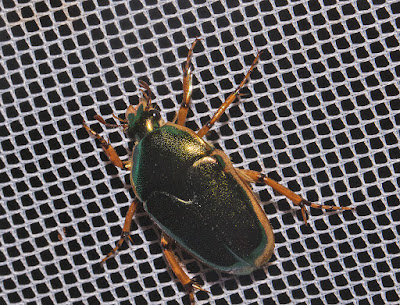 One of the few spectacular insects attracted to our lights was the scarab, Mycterophallus duboulayi, is normally day-flying and feeds on flowers. If the diurnal beetles are resting in the vicinity of lights, they often are attracted. 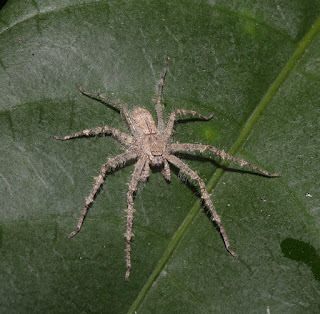 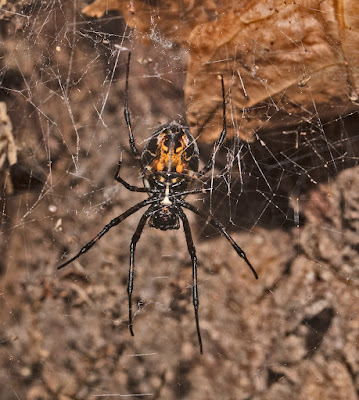 A Red-backed Spider, Latrodectus hasseleti. Several of these spiders were found in the crevices of bark on a number of orchard trees. 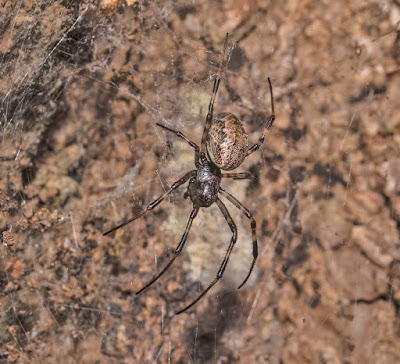