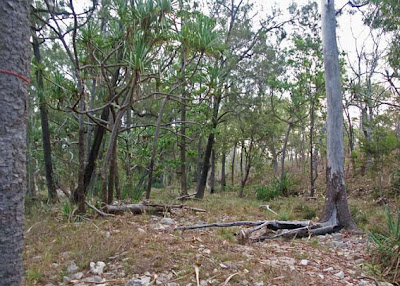 Buck Richardson photo
Last week Buck and I chose this spot on the Tinnaroo Creek Rd, not Tinnaroo Creek but Douglas Creek. The area was overgrazed and with plenty of awful introduced weeds. At the middle of the Dry Season one could not expect much. The creek was nearly dry and the vegetation crispy dry BUT IT HAD NOT BEEN BURNED. So we put up our sheet and wandered around. It was warm and sultry and not very windy. i predicted a big moth night. Well that never eventuated but there were other insects to make the adventure a very great success.

Tromping around in the litter and dry grass, as is the wont of orthopterists,--and I haven't yet stepped on a Death Adder-- I discovered this katydid. It is Austromecopoda nurrungar Rentz, Su and Ueshima. 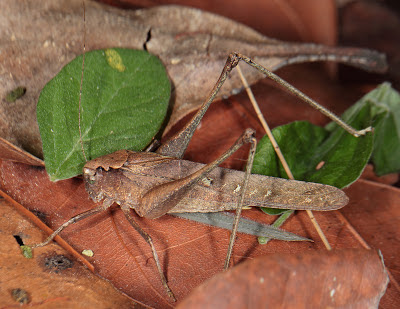 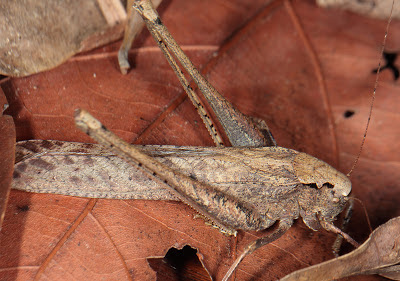 The genus was proposed in 2006 to describe four species. This one was described from Shipton's Flat, nr Cooktown, Qld with the southernmost record being Desailly Creek, 10 km W by N of Mt Carbine, Queensland. The range is now extended considerably to the south. 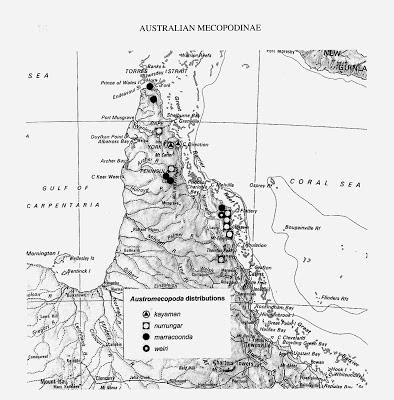 You can see from these distribution maps that Queensland seems to be the "hotbed" of known species. A. nurrungar is also known from populations in the Northern Territory. Species my well occur in New Guinea. In all localities these species live on the ground in grasslands where they sit quietly in dry leaves. They feed on dry grass and seem to be primarily nocturnal in their behaviour.

The dates on most of the specimens recorded in our paper were from May onwards. October seems late for the species and if you look carefully at the female, you can see that it has had a long life as an adult and is tattered and worn. The adults occur from early in the Dry (May) and persist at least until mid October when it is really dry. 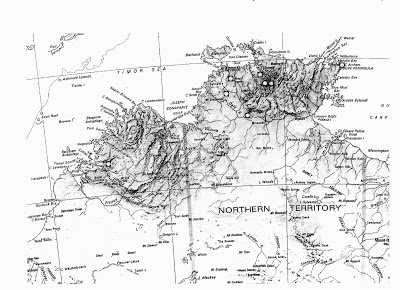 Known distribution of A. nurrungar in the Northern Territory 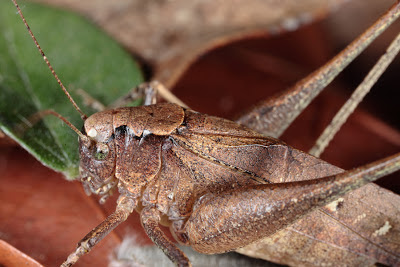 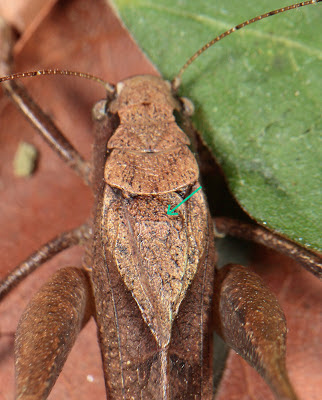 Male E. nurrungar. Arrow indicates the stridulatory vein. In the Mecopodini, this vein is difficult to see from above because the tegmen is so well sclerotised. But it is there and on its underside does have a file with about 47 teeth. It is useful to know that the type species (which is a complex of several species) Mecopoda elongata (Linnaeus) (from Timor) has a file with around the same number of teeth.

The distinguishing characters of A. nurrungar are its small size (males 22-26 mm, females, 25-29 mm), the male cercus with two minute teeth at the tip and the subgenital plate of the female being apically short and with a broad triangular carina. 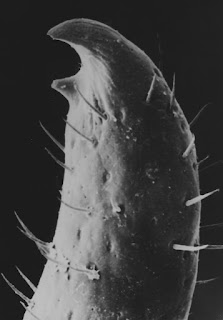 The karyotypes of several Austromeopoda species have been investigated and all are the similar (which is not unusual within genera in the Tettigoniidae). There are 29 chromosomes. In Mecopoda there are 27.

Eggs of Austromecopoda species are odd. Laid eggs of A. marracoonda Rentz, Su, Ueshima from Coen, Queensland have a rough surface and a distinctive hook at one end. 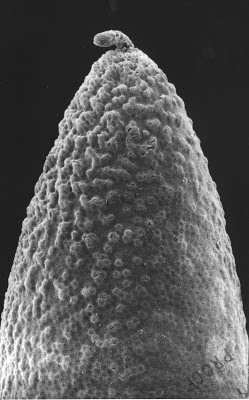 Egg of A. marracoonda greatly magnified

The name "nurrungar" deserves some definition. It is an aboriginal word meaning "to listen", an allusion to the fact that this author has not heard the stridulation of any Austromecopoda species. I'm still listening! 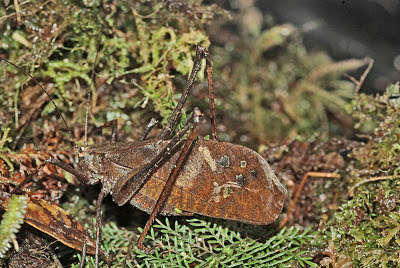 A Eumecopoda species from the Muller Range, Papua New Guinea