A Tale Of Two Katydids

To a biologist, this is an interesting story showing the value of morphological, cytological and behvioural characters in solving a taxonomic anomaly. 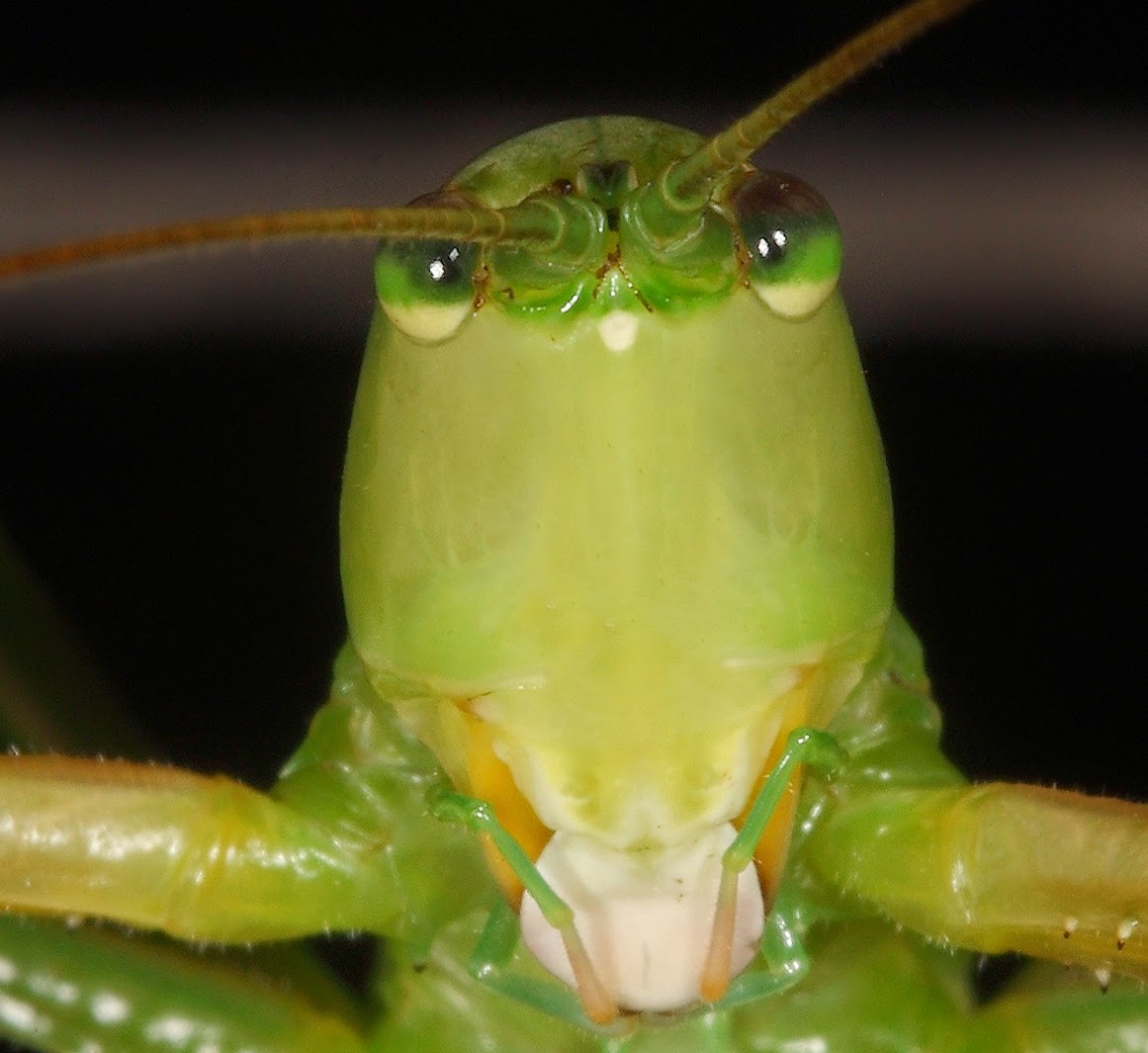 In the second volume of my Monograph of the Tettigoniidae of Australia I described 15 species of the genus Hemisaga. This and several other genera were accorded a new subfamily, the Austrosaginae. This subfamily occurs in the southern portion of Australia. Hemisaga does as well but there was one species that was a distributional odd-ball.

examples of the genus Hemisaga: 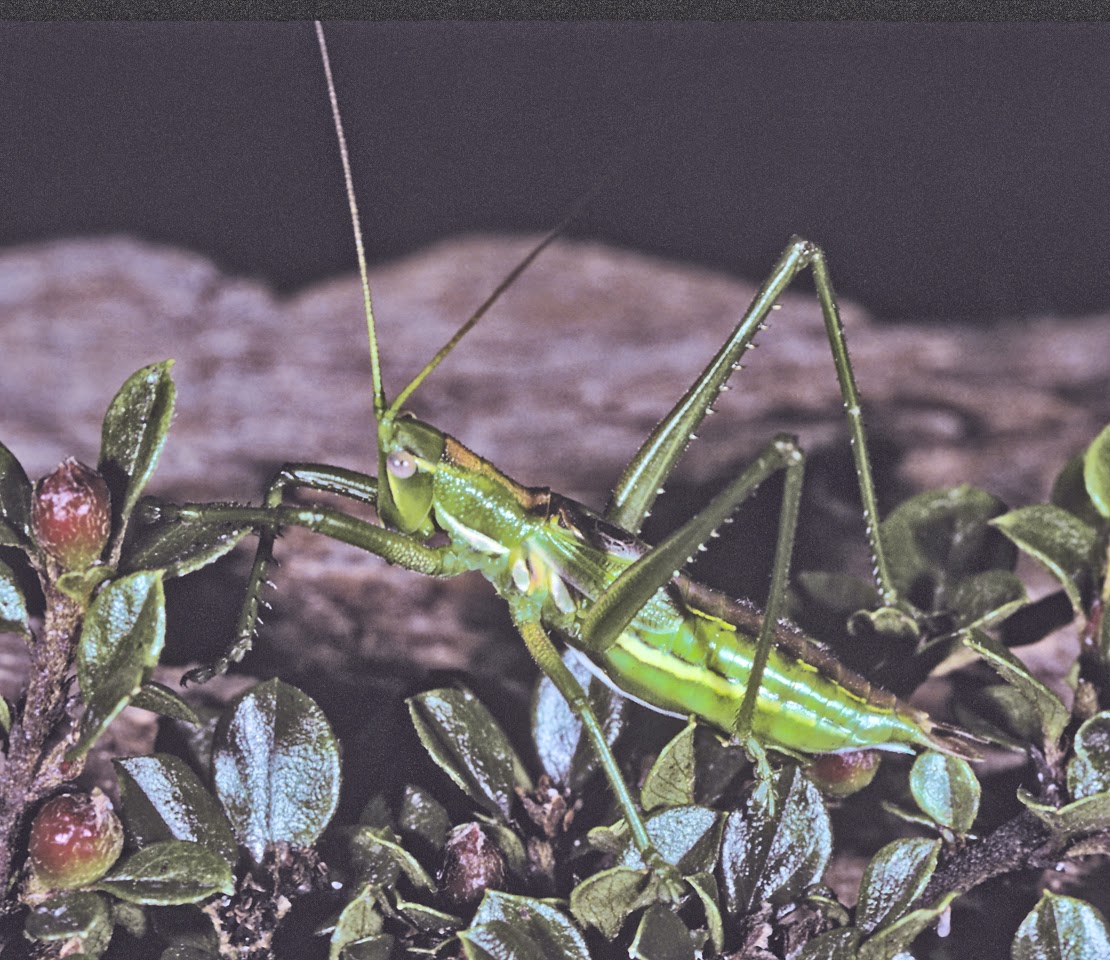 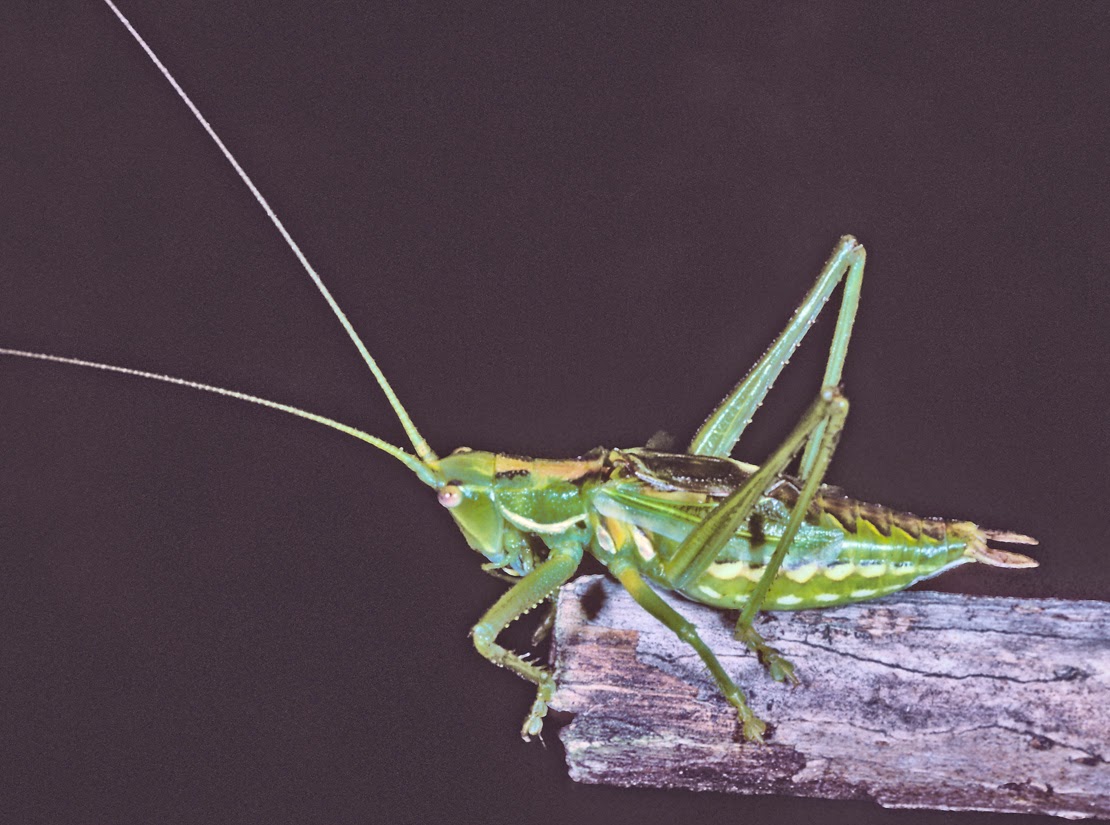 A male of Hemisaga pericalles Rentz, a species from the south coast of Western Australia near Albany.

There was a single record of a female of what appeared to be a Hemisaga from Mataranka, Northern Territory. This locality was thousands of kilometres form the nearest record of the genus. One might first think that the specimen was mislabeled. But this was not so, and especially not so because it was collected by my predecessor at CSIRO Entomology, Dr KHL Key. Ken was meticulous record keeper and had exhaustive fieldnotes. When they were checked, this odd katydid was recorded as collected in a grassy area near the motel.

I described it as Hemisaga elongata noting that is had a suite of characters that was not found in other Hemisaga species.

In 1999 a trip was made to Mataranka and the species was rediscovered. Males and females were found mostly in Sorghum grasses at night. And it was found in other areas such as in the Palmerston Developmental area not far from Darwin. Here it was found in the shrubby vegetation behind the mangroves. This katydid seems to specialise in feeding on other katydids. In both localities our observations indicated a preference for Caedicia species. 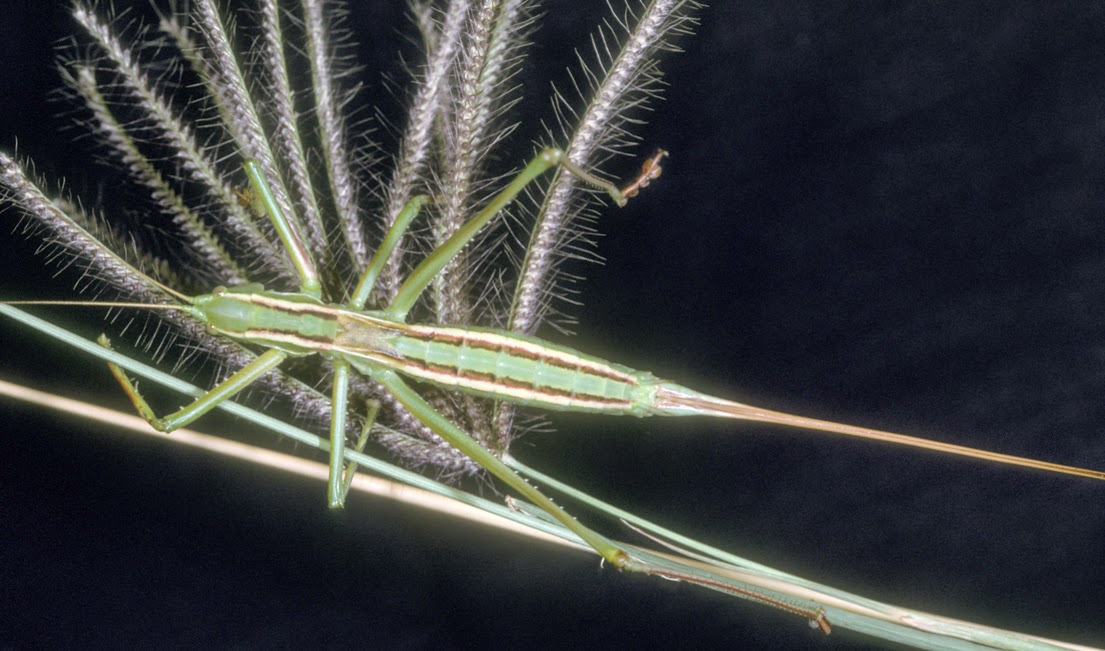 A female of Hemisaga elongata. Note the very slender shape fo the katydid. 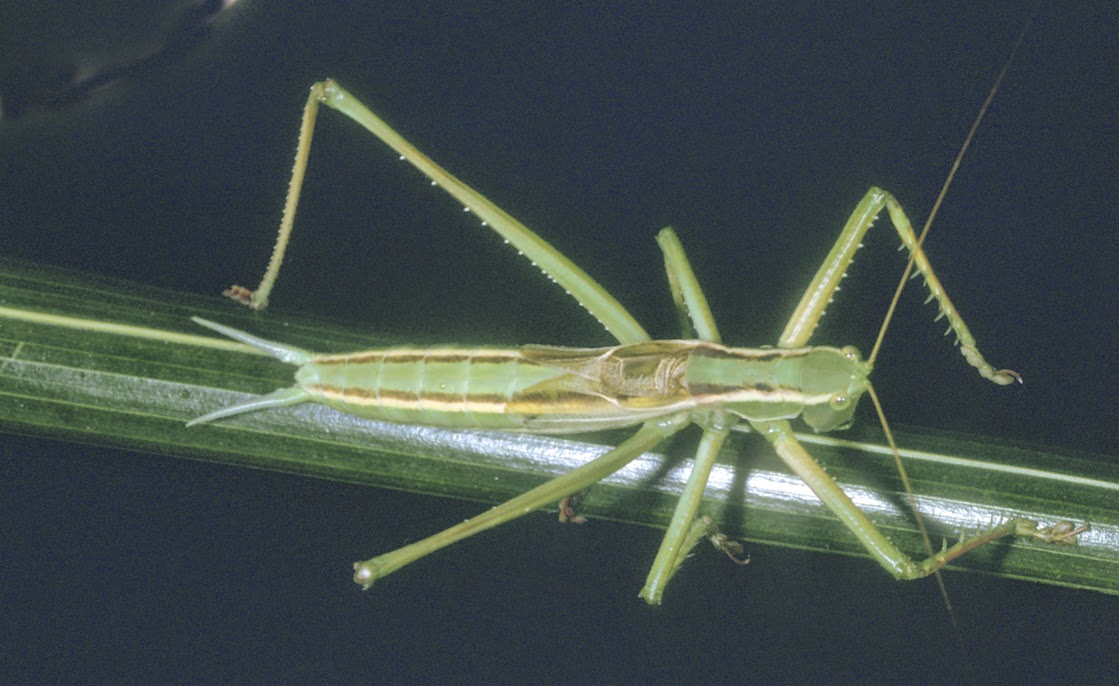 A male of Hemisaga elongata. Note the elongate male cerci (claspers), the inspiration for the  name.

Local collecting trips conducted after moving to the northern tropics in 2003 took me and Jadon Van Pelt to the mixed open woodland north of Mt Malloy. To my astonishment, we found what looked like Hemisaga elongata. After several trips to the area, we found a small number of individuals over a period of two years. This katydid was an adult in July and August-during the dry season. The herbaceous vegetation was dry and grasses were dead. Not many other katydids were around but several grasshopper species were still present.

The Queensland species was found to be quite distinct from H. elongata. In fact there was enough evidence to place both species in a new genus, Alinjarria. [Alinjarria is derived from an aboriginal word meaning  "north", an allusion to the distribution of both species.] The common name for the genus is "Imitators" based on the deception that it was a member of Hemisaga. The species was named Alinjarria jadoni Rentz, Su, Ueshima in honour of Jadon who found the first specimen.

But this put a species on each side of the continent in the northern tropics. No other member of the Austrosaginae occurs in the tropics. Further study was warranted.

All of the austrosaginae katydids reported in the monograph had eggs that had distinctive "caps". Eggs of both A. elongata and A. jadoni lacked caps. In addition, the karyotype of both species demonstrated Alinjarria was different from any known species of Hemisaga. 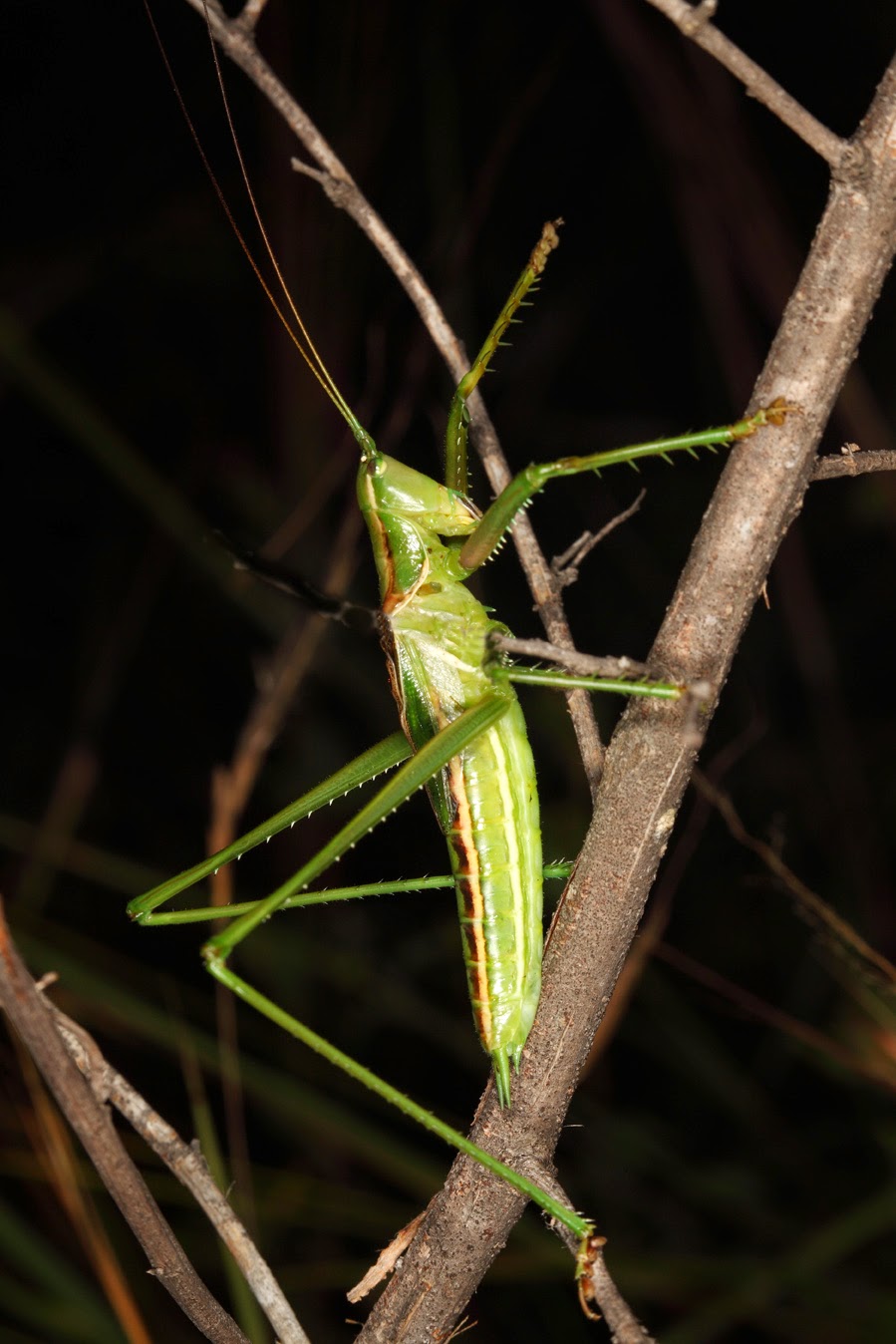 Using the morphological, both structures and the egg morphology, it was obvious that Alinjarria was not and austrosagine but a member of the subfamily Listroscelidinae. This subfamily has a number of genera in the tropics and all are known to be predators. Austrosagines, on the other hand, feed on seeds and fruits. So biologically Alinjarria was also better placed in the Listroscelidinae.

This blog was prompted by the discovery of A. jadoni in mixed woodland near Mutchilba, Queensland. 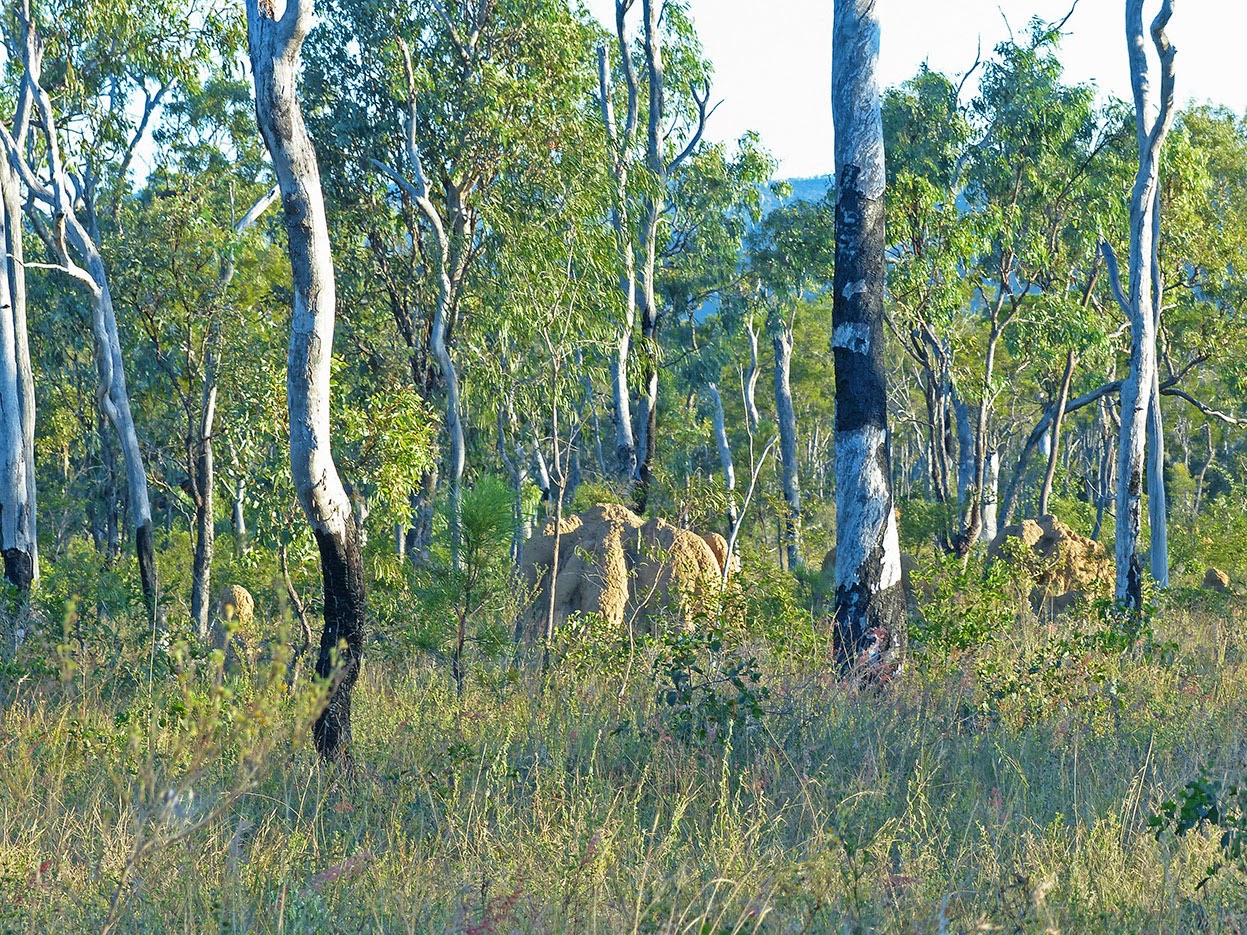 This area is not dissimilar to the habitat where Jadon's Imitator was originally collected. It is regularly "prescribed burned" so there is a minimum of native shrubbery and most of the herbaceous vegetation and grasses are introduced species. 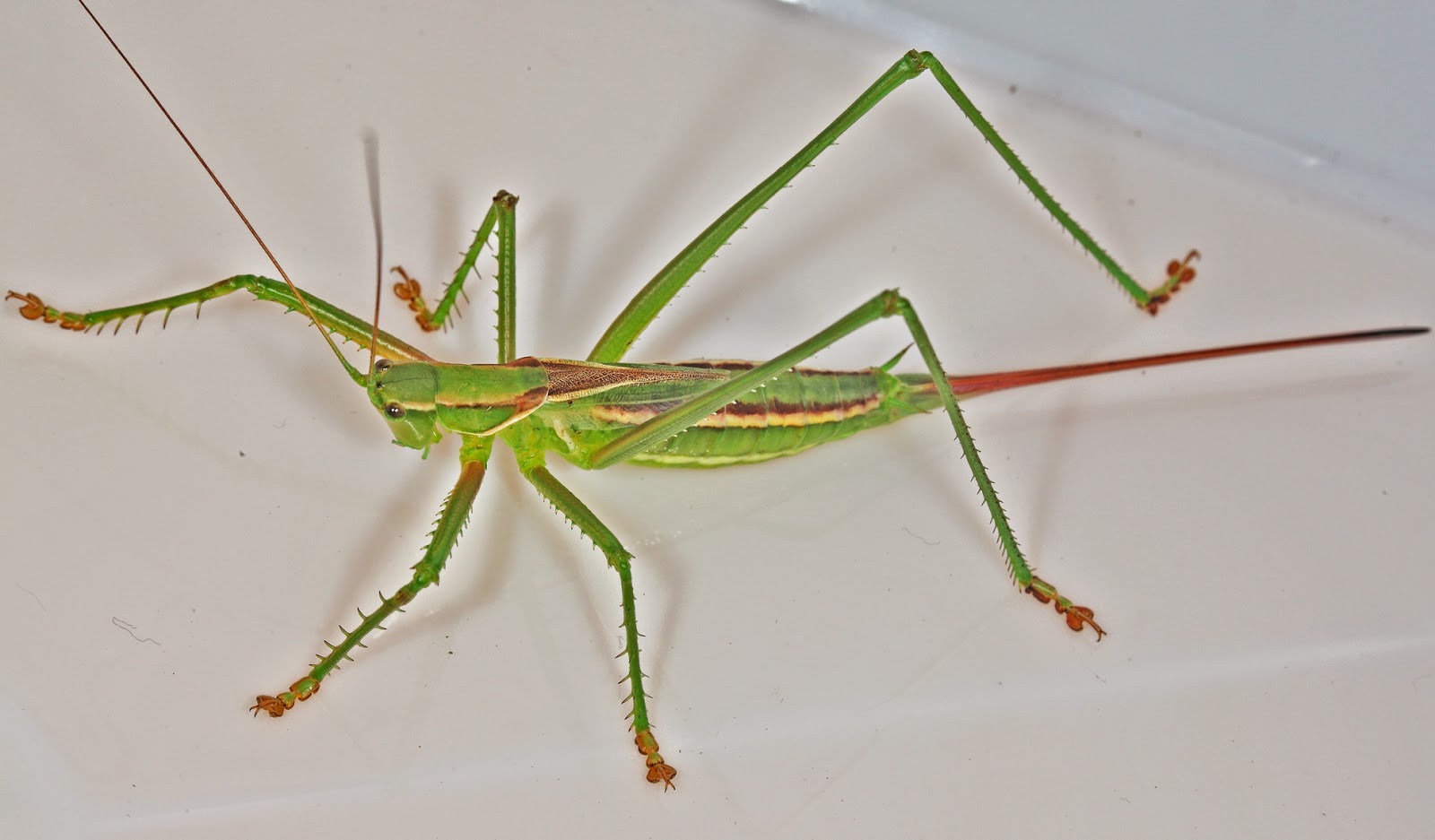 The vegetation was "crackle-dry". Daily rains along the coast have not penetrated inland very far. The katydids were not what one would consider common. Two males were found on the 25 May. Another trip was made on 28 May and a slightly different locality was searched. The vegetation looked the same but the katydids were not found. We returned to the original spot and 2 females were located at sunset. This was a sufficient series to validate the species from an area slightly west of the type locality.

The challenge now is to trace the westward distribution of A. jadoni. With this katydid appearing to be quite rare, this may take some time.

Rentz, DCF. 1993. A monograph of the Tettigoniidae of Australia. Volume 2. The Phasmodinae, Zaprochilinae and Austrosaginae. With contributions by D. Colless and N. Ueshima. CSIRO Pp. 1-386.

The Last Throes of Summer

Here in the tropics we approach the Dry Season with cooler temperatures, lower humidity, less rain and fewer insects- It's almost winter in the tropics.

Harbingers of the end of the wet season are some of the following orthopteroid insects. 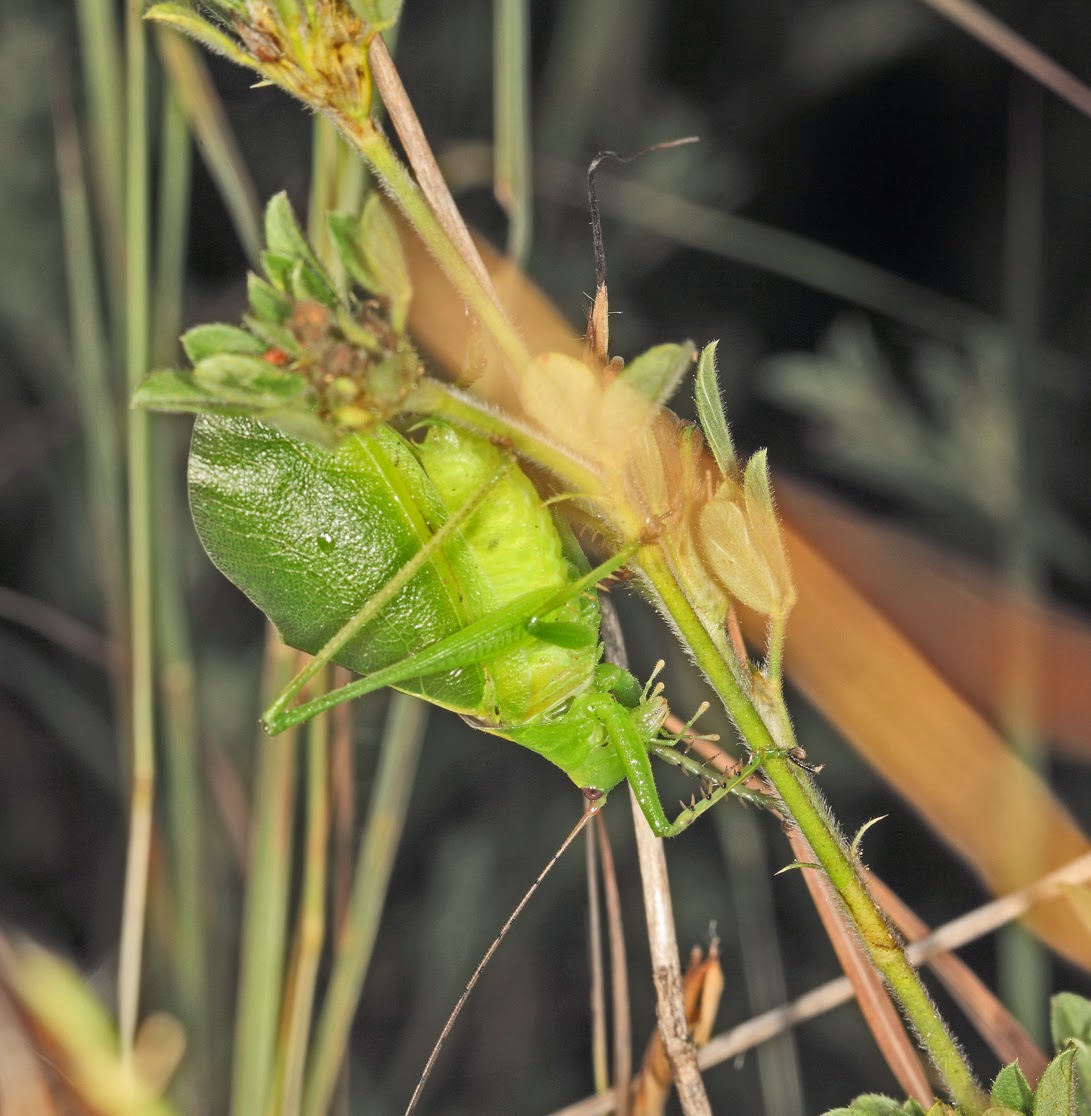 Males hang upside down and stridulate from dusk from low perches in open areas of grassland and mixed vegetation. The incessant song continues until late in the evening when tmeratures drop. The sound is loud and travels for a great distance. It can easily be heard from a moving car. 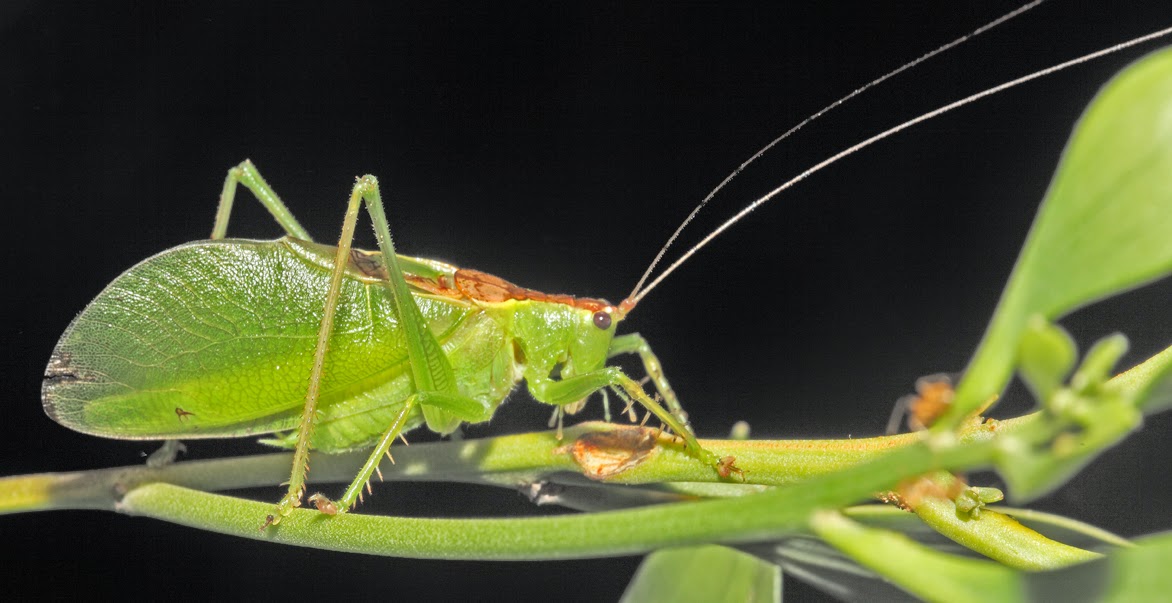 This species is a true predator and it seems to specialise in subduing other katydids. 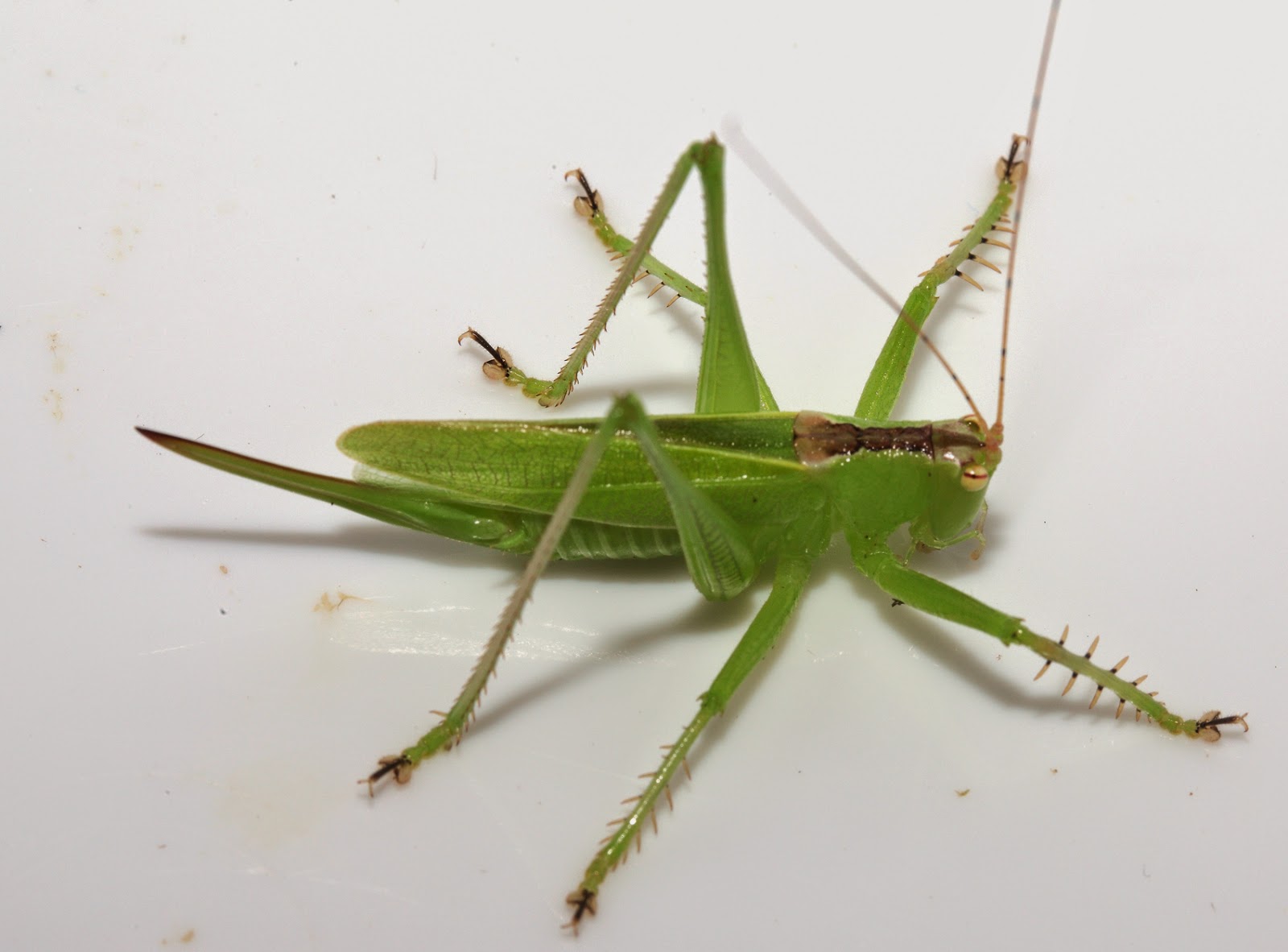 Females look quite different from the males. The wings are just used for short flights or gliding, whereas, the males wings (tegmina) are modified for sound production. Males can also take short flights when necessary. However, the escape technique is to drop deep into the vegetation and remain still until the danger passes. 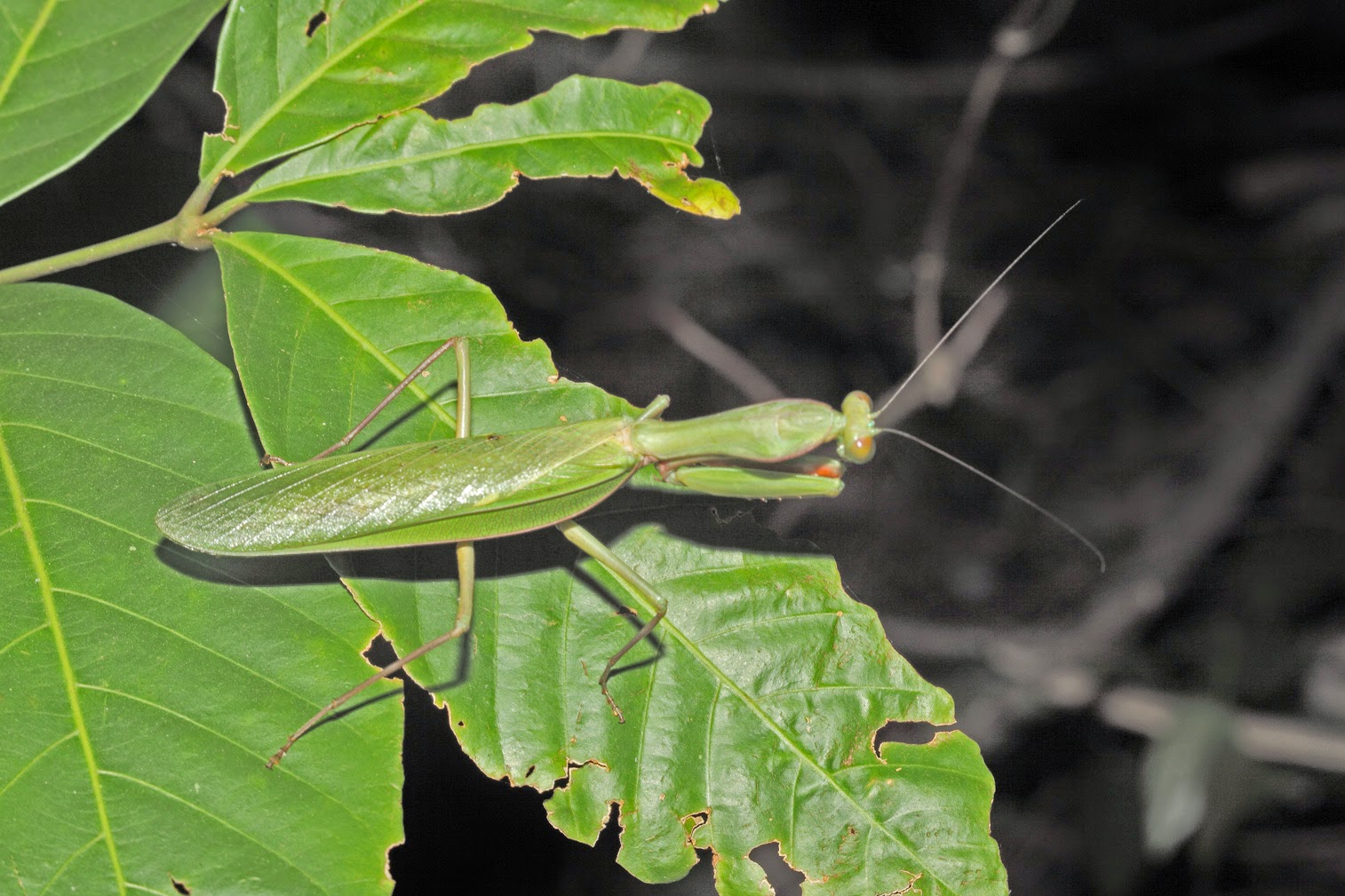 The Giant Rainforest Mantis (at least 60 mm in length), Hierodula majuscula (Tindale), Mantidae; Mantinae seems to show up at the lights for only a few weeks at the end of the season. I have never seen nymphs around in the garden so I assume it drops by on its nocturnal excursions. The spines on the forelegs can deliver a painful prick if this species is not handled carefully. 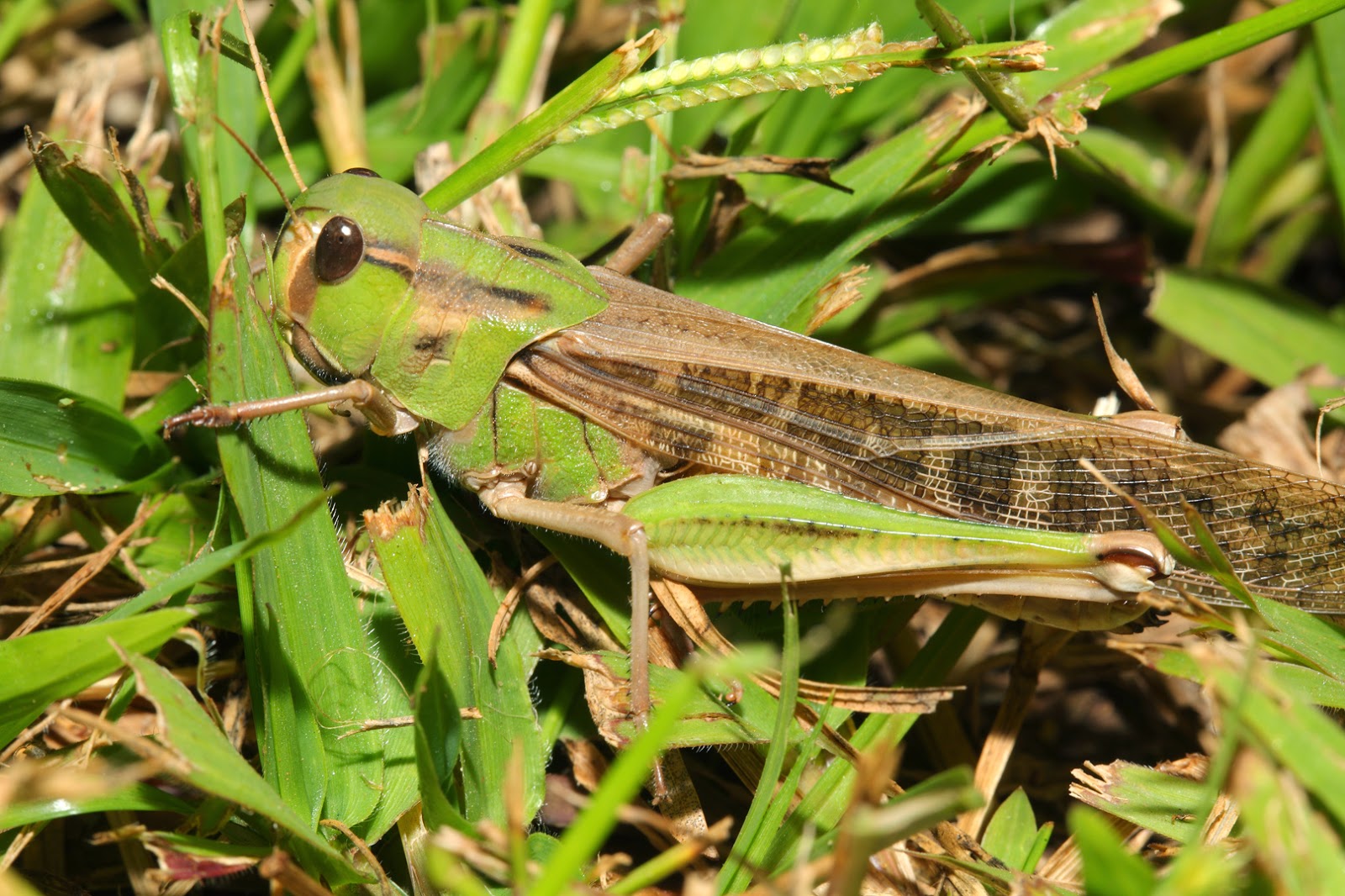 The most surpsising drop-in is the Migratory Locust, Locusta migratoria Linnaeus, Acrididae; Acridinae; Oedpiodini. This large locust is thought not to fly at night and but I have found it at light in Kuranda sporadically over the years but only during May. I have recorded it in May 2005, 2009, 2010 and 2014. On our last trip to the Daintree, it was very common and large numbers of individuals would take flight when disturbed during the day. However, after dark many were found sedentary in grass and none were attracted to our lights. This species is a grass feeder.

The only plague of recorded for this species in Australia was 1974-76 during favourable years. However, overseas this species is a major pest of rice, corn, sorghum and related plants.

Anyone travelling up the coast from Cairns to Mossman in far north Queensland can't miss this Osprey nest. 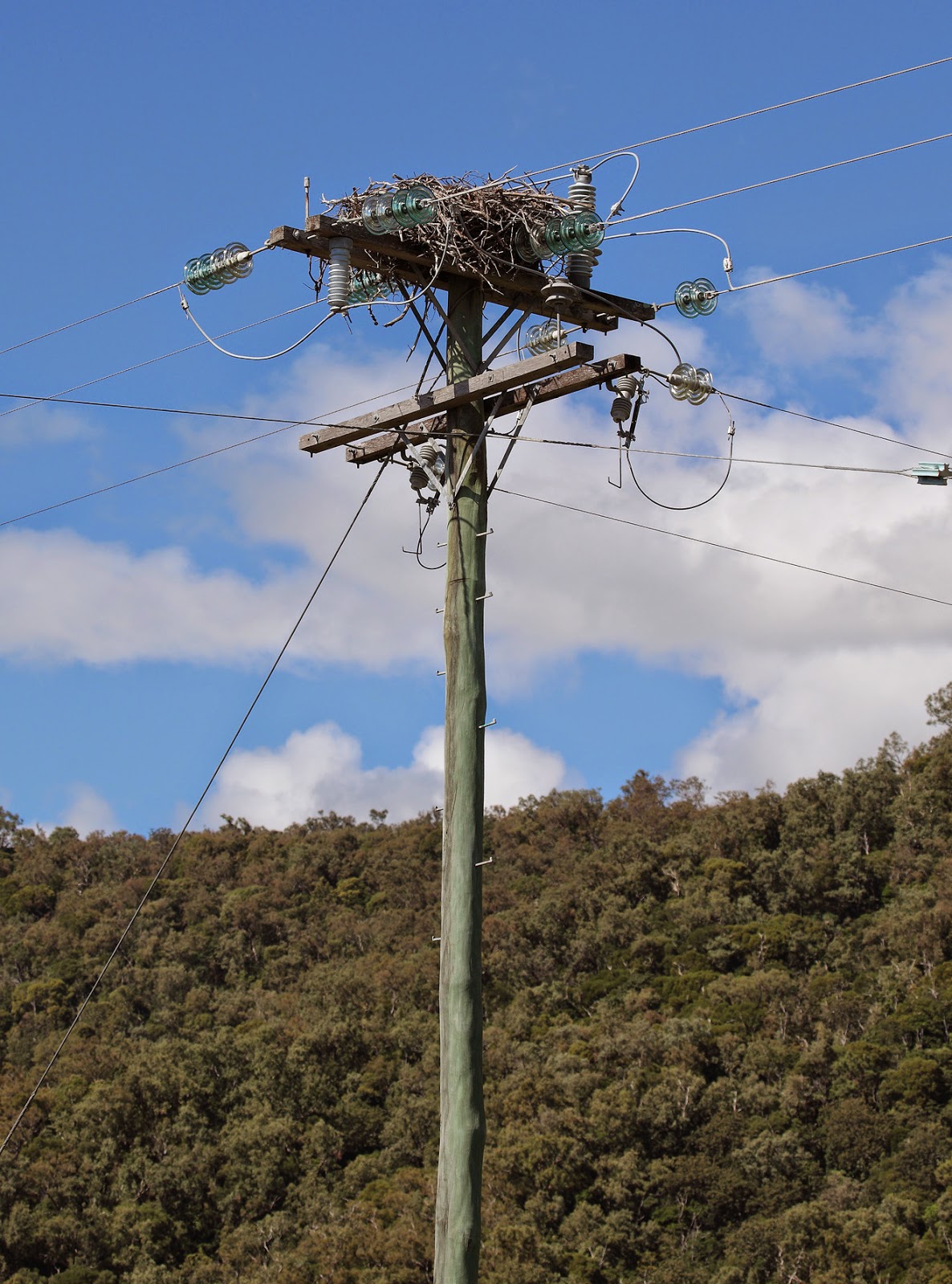 Perched on a pole along the busy highway, a perfect nest is taking shape. The local electricity folks seem content to leave the birds alone. It seems ideally placed-not far from the ocean and there are a number of flowing streams a short distance form the site which is otherwise surrounded by sugarcane fields. There are a number of other nests along the same highway. But we noticed some activity around this nest and stopped for a better view. 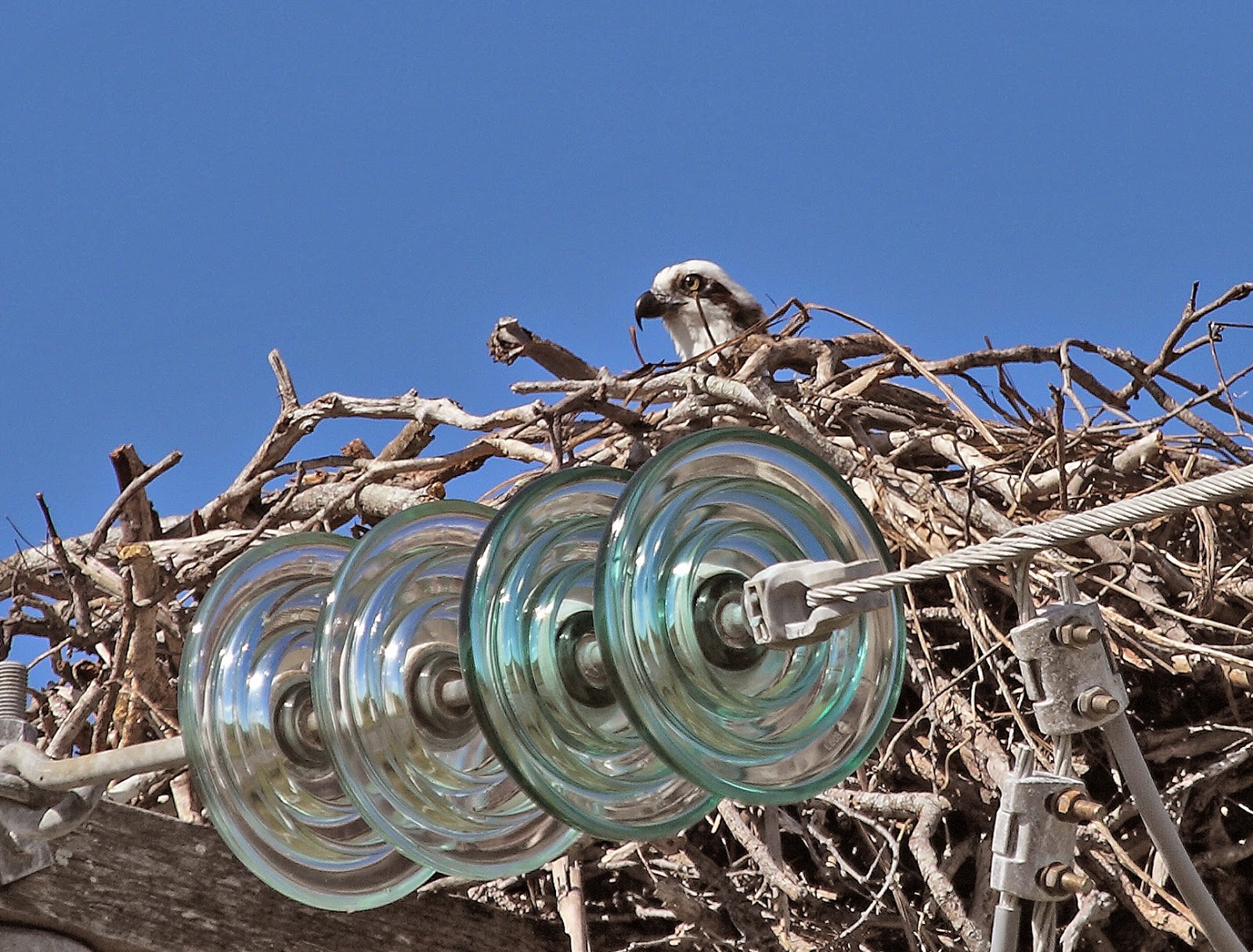 Sure enough a head popped up. We thought they have bubs in the nest.

One of the adults cruised by giving us the once-over. 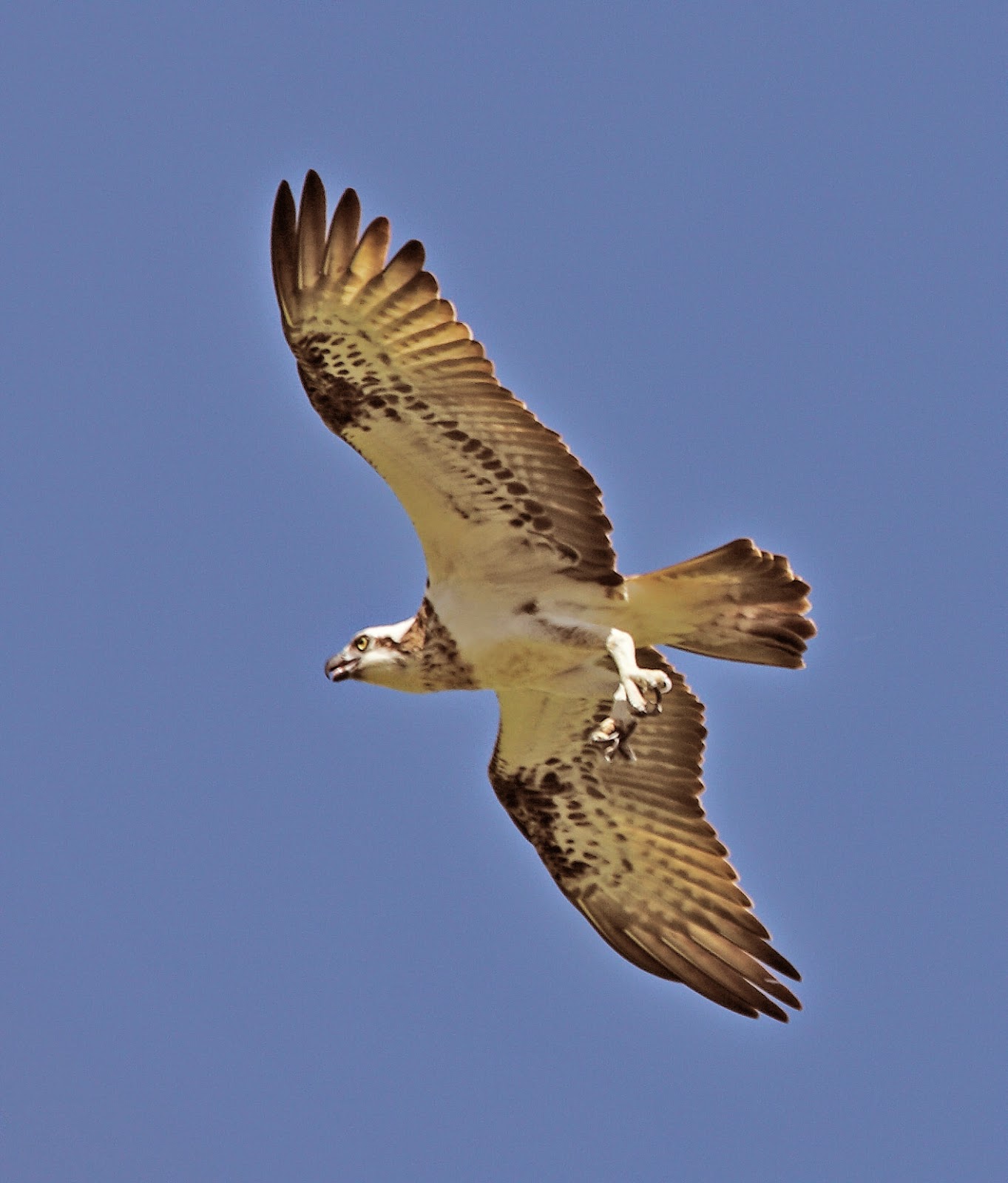 A nice bird against the blue sky. Then it disappeared for a while. 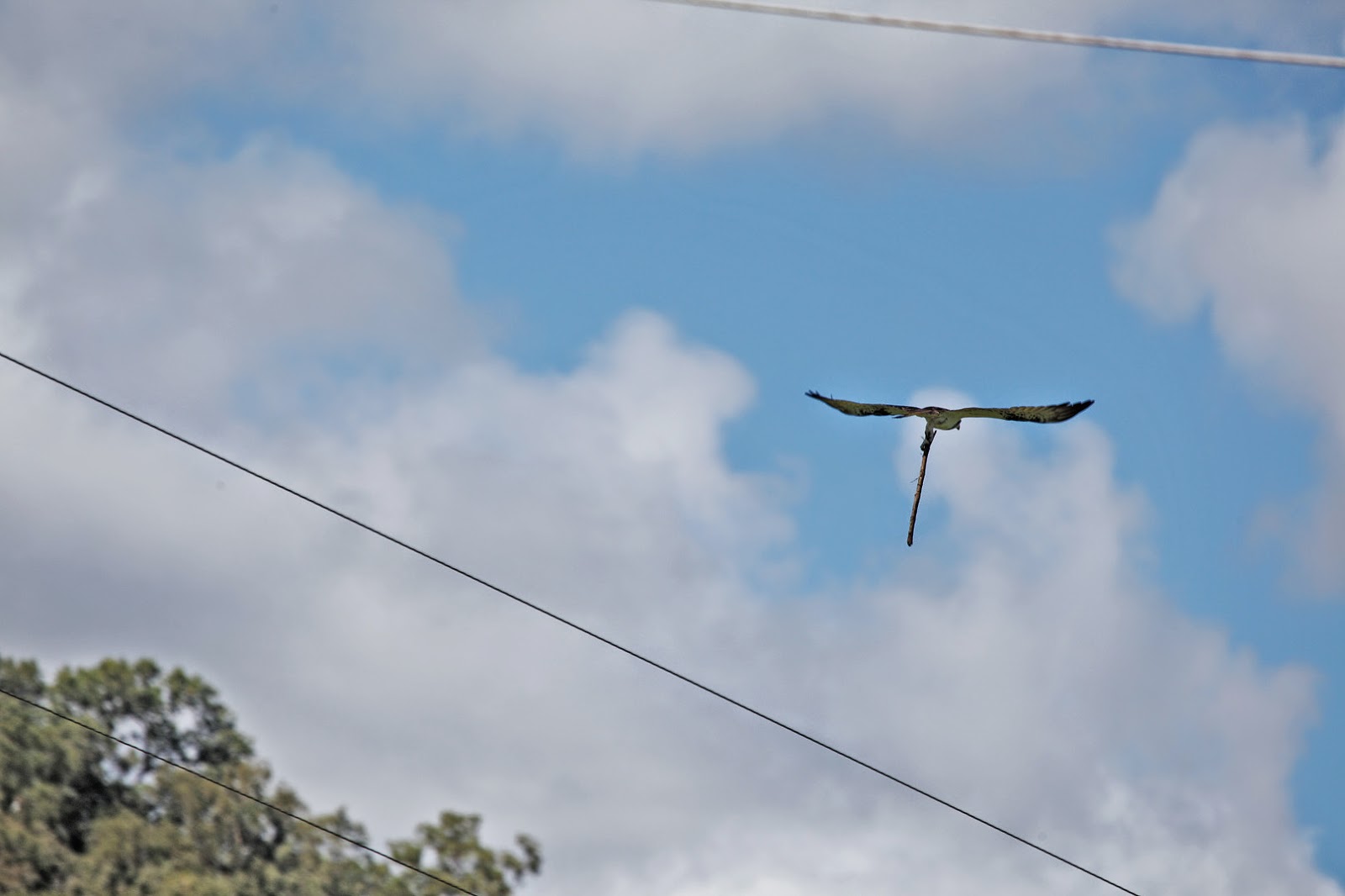 The bird returned carrying what looked like a snake. What a catch! And we are here to watch it. 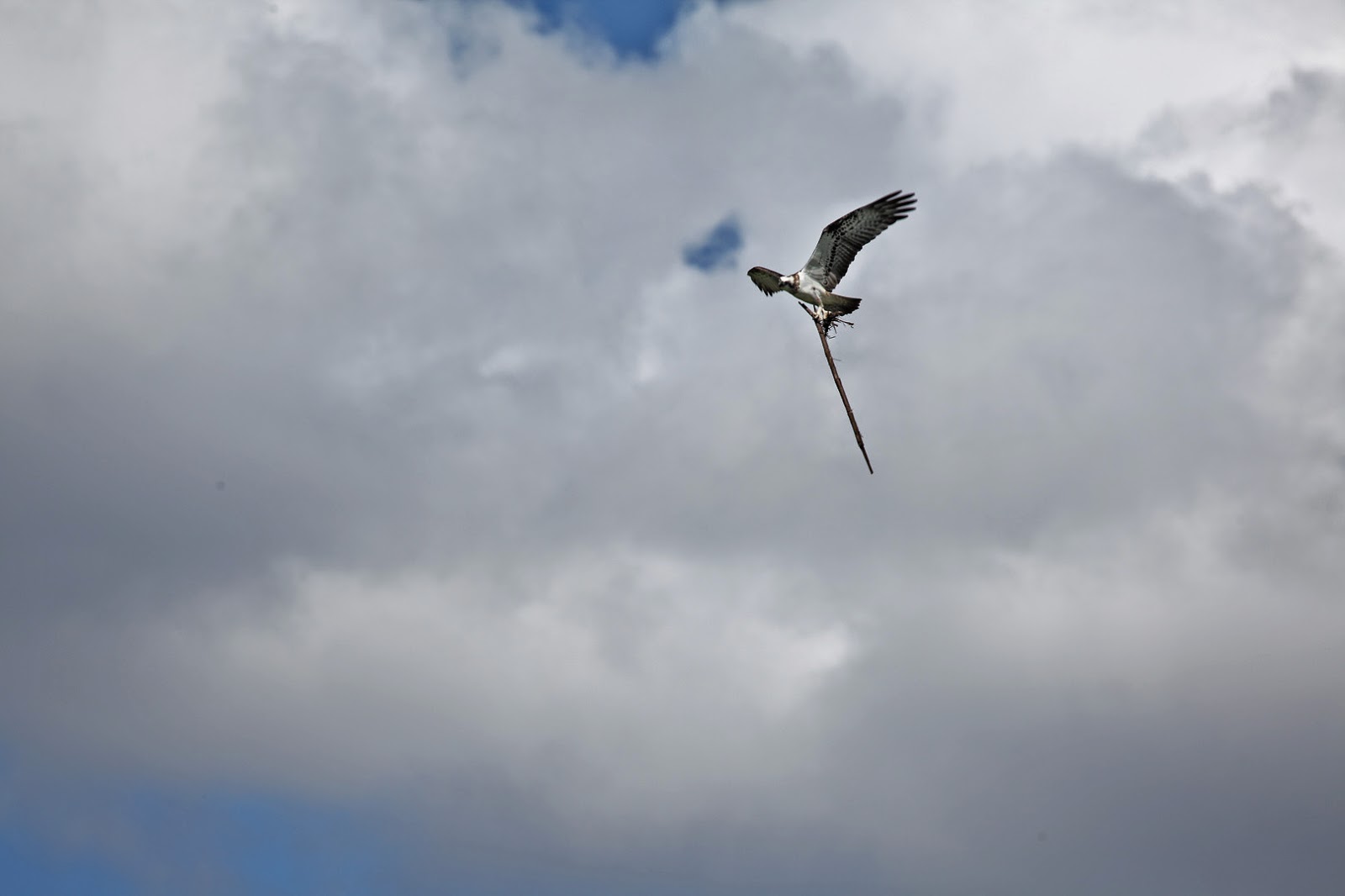 But it didn't dangle like a snake. It was a stick. 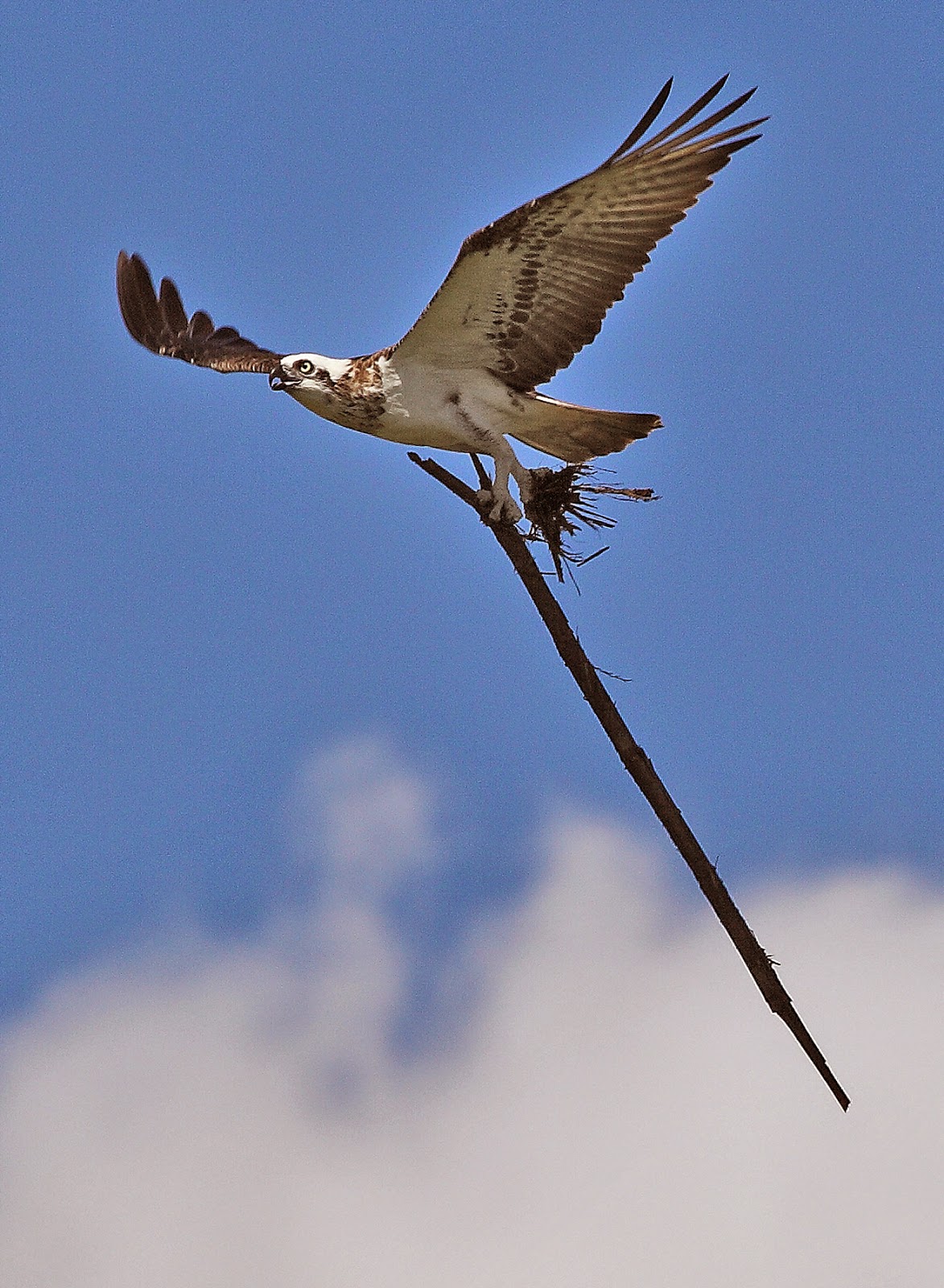 But not only that, it was carrying a stick in one foot and some twigs or muddy grass in the other. 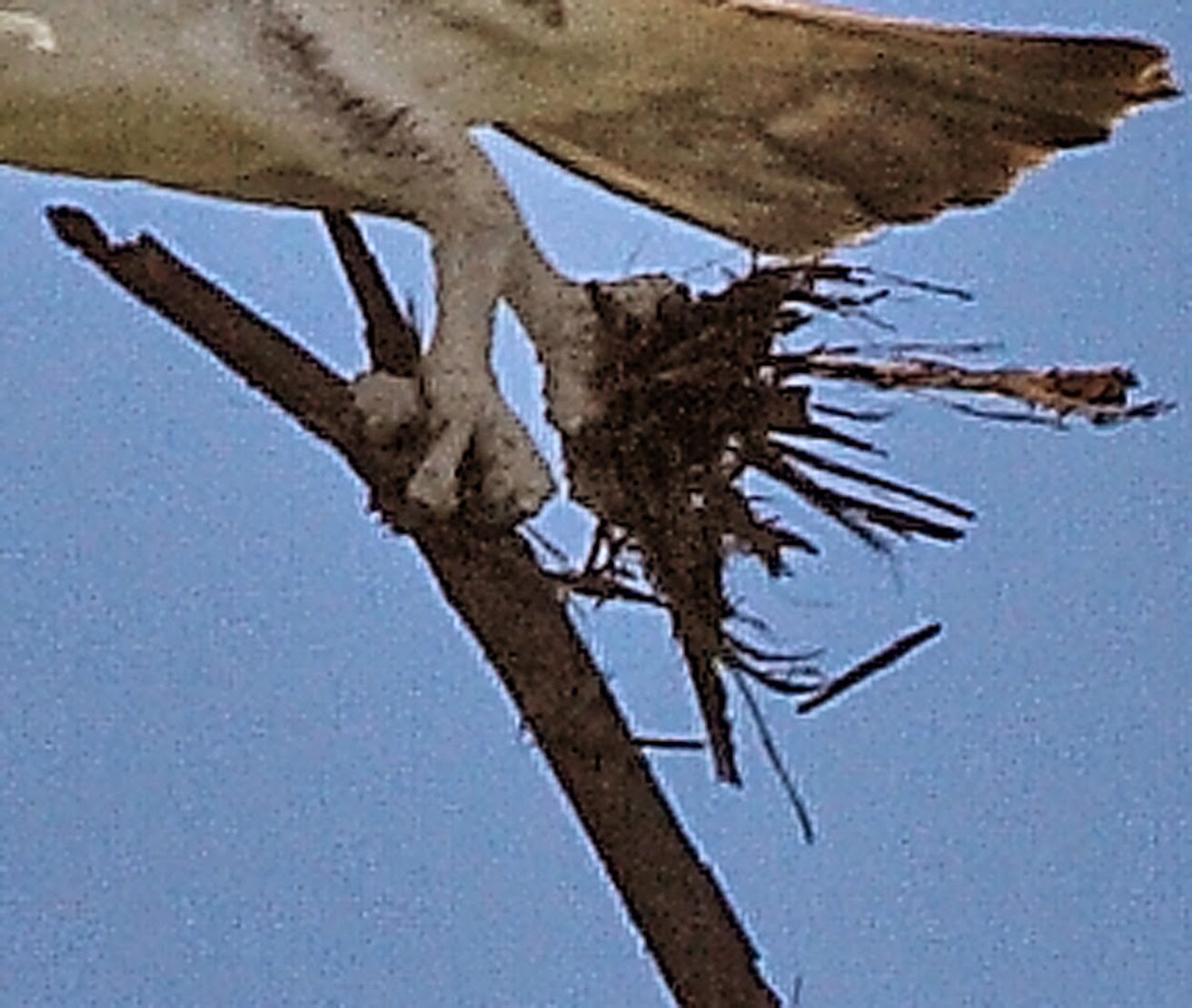 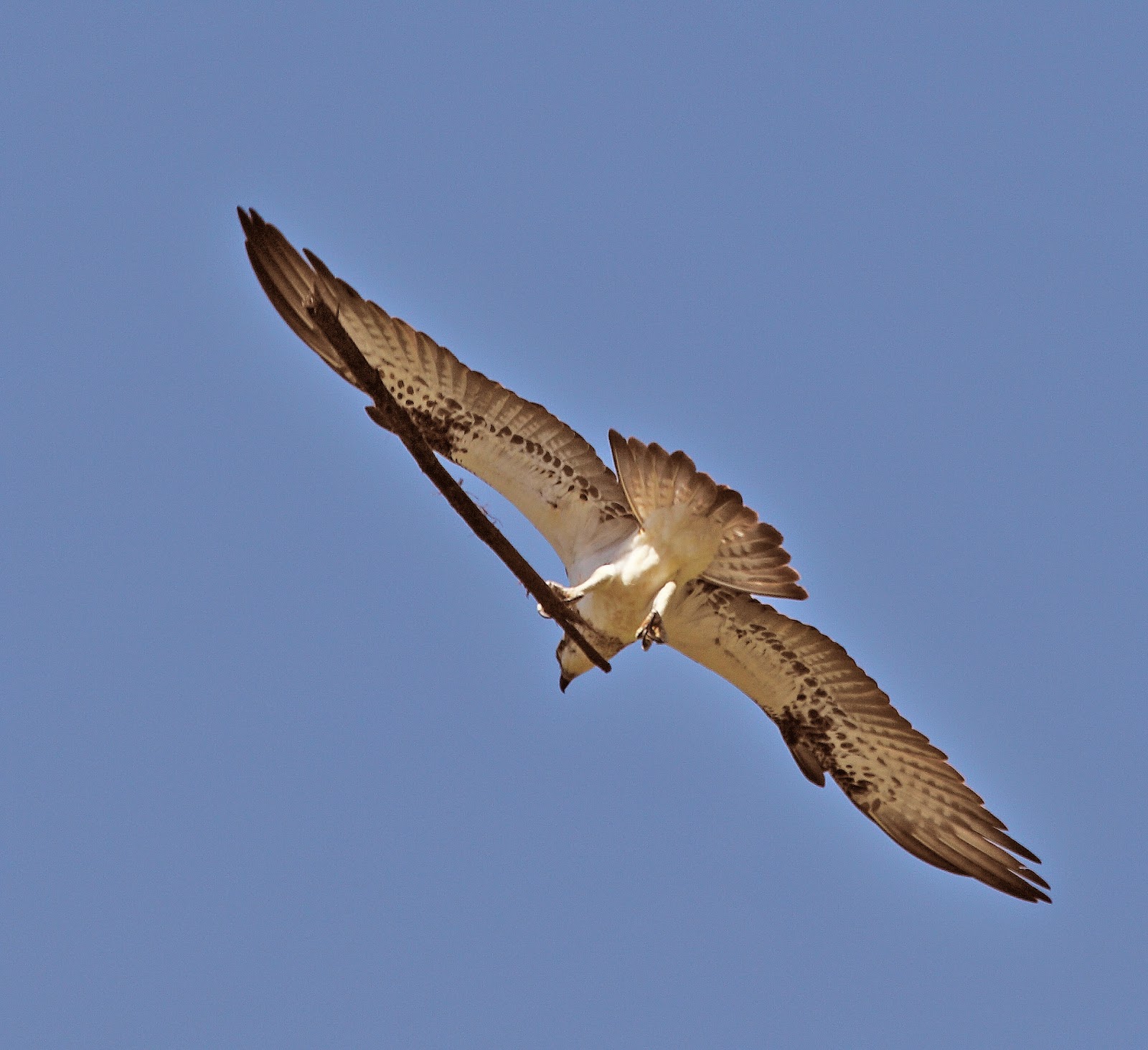 All this happening with cars whizzing past at great speed and incredible noise. The birds just carried on with business as usual.

So it seems the bird on the nest was the female and she was doing the house-keeping while the male was gathering the nesting material. In a month or so we will check on the occupants again and keep you posted.

Thanks to Dave Weissman for the link