A situation has arisen recently that is worthy of note here.

A large stick insect, the Giant Spiny Stick insect, Eurycantha calcarata Lucas, has been found for sale in Melbourne & Sydney pet stores. This impressive species is related to the famous Lord Howe Stick Insect, Dryococelus australis (Montrouzier). The similarity of the two is quite obvious. You can check the two in Brock and Hasenpusch’s book listed below. 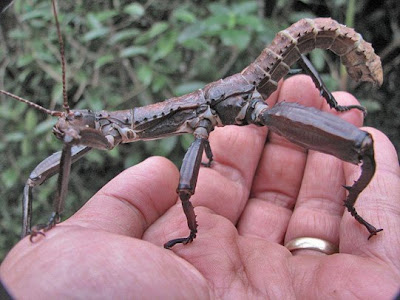 An adult make of the Giant Spiny Stick Insect. 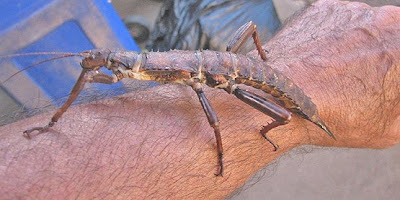 An Adult female of the Giant Spiny Stick Insect.

This species, like offerings in many pet shops, does not make a good pet. When disturbed, males raise the hind legs and emit a powerful smelly secretion from the tip of the abdomen. This problem is that fingers get caught between the hind tibia and femur; the hooks on the latter can penetrate the skin to the bone. So this is not a good pet, and especially not suitable for small children. In New Guinea local people are known to use the hind legs of a related species with bigger spines as fish hooks. So these spines are formidable defence weapons for this stick.

The problem with this stick insect in Australia is that it is not really certain that this insect actually occurs in Australia. The original species description was said to include specimens from Cape York, but to date no "reliable" specimens have been found naturally in Australia. There could have been an error in labelling all those years ago and the specimens included in the original description may not have actually come from Australia. Dozens of expeditions to Cape York by all sorts of biologists have occurred over the years but no one has ever collected one of these giants. 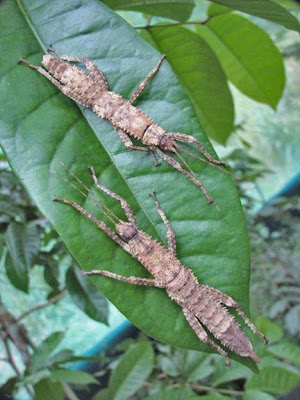 When questioned, the collector of the specimens found in Melbourne pet shops claims he found them in the Hopevale area. (Hopevale is not far from Cooktown, Qld.) This is a popular collecting locality for entomologists. No other Giant Spiny Stick Insects have turned up in any collections form there.

The most likely scenario is that eggs of this species were smuggled into Australia from Papua New Guinea where the species is not uncommon. But because the original description states that some specimens were from Cape York, it is not illegal to possess them or sell them in pet shops in Australia because they may actually come from Cape York if the collector is telling the truth.

An important issue looms. This species is primarily a ground-dwelling stick. However, a potential economic problem may develop because the Giant Spiny Stick Insect feeds on palms and is a pest of Coconuts and Oil Palms in PNG. Australia has several hundred native palm species and a large number of introduced palms grown in parks and gardens etc. If this insect is alien to Australia, it could end up adapting to tropical Australia and become a pest.

Geneticists are attempting to use DNA sequencing to determine if the Australian specimens actually came from New Guinea populations. If so, there is a good case to prevent further sale of the species and destroy the known living cultures in this country.

This is an important case for several reasons. I guess it is possible for a few small eggs to get by the X-ray machines in airports. If so, some tightening up is necessary because of potential “agricultural sabotage” by unscrupulous individuals. Also it shows how easily something of potential economic concern can slip through the system. With the relatively recent introduction of Fire Ants and the Electric Ants to Australia, and the potential damage they can cause, there is a good case for strengthening the surveillance of goods coming into this country. With the huge numbers of containers entering the country from many ports, complete surveillance may never be possible. However, I suspect thorough checking has a relatively low priority with governments these days. Agricultural concerns seem to be of minor consideration.

The really depressing thing is that you've only scratched the tip of the iceberg. The online exotic pet insect forums are shocking. People are trading, both legally and illegally, all sorts of pest species. Fire ants across continents, for instance.

It is well known that the males of E. calcarata are very aggressive but this can be avoided by regular attention/handling when it is still in its nymph stage and as it grows older it will be much tamer than a male found in the wild.

I know of very few people who have have had issues keeping these as pets. As long as you're careful (or know what you're doing) they are interesting animals to keep. Not for young children though!