We have been having an odd winter. We had several  cold nights where it got down to 6-7C. Now a few days later, it has warmed up to 16-18C over night. As a result some of the biota are a bit confused.

One forest organism that seems to have taken advantage of the warm night is the Bridal Veil Fungus, Phallus industriatus (Phallaceae). 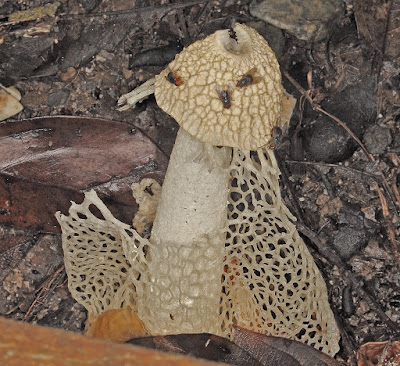 Warm, moist conditions seem to suit this odd fungus. Innocuous enough from a photo but it has a awful smell. For a couple of days I smelled what I thought might be escaping LPG gas, then I recalled the smell of flowering Amorphophallus bulbifera but it is the wrong time of the year for this plant. I searched the usual pots but could find no bulbifera.

Then I stumbled on the above-my first encounter with the Bridal Veil Fungus. The "veil" is usually intact, but after a couple of days with turkeys and birds about, the veil has become detached. This one measures about 10 cm. 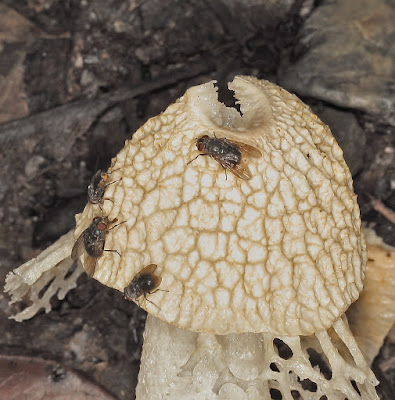 The smell attracts flies, especially Blowflies (Calliphoridae) which feed on the juices of the plant. 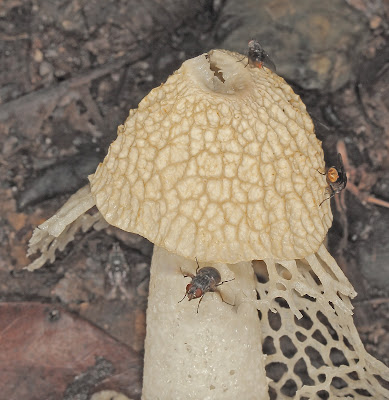 In so doing the spores of the fungus attach to the fly and as it moves around the rainforest the spores detach and spread the fungus to additional habitats. 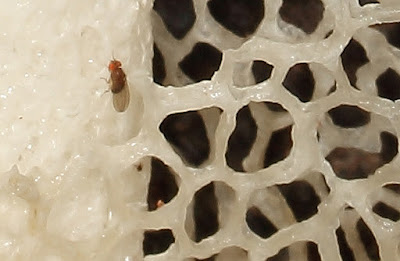 Blowflies are not the only flies that feed on the fungus. Here a Drosophila species has also been attracted to the food source.

The odour of this fungus is so strong that campers have been known to abandon campsites due to fetid smell.
Posted by Mr. Smiley at 11:13:00 No comments: 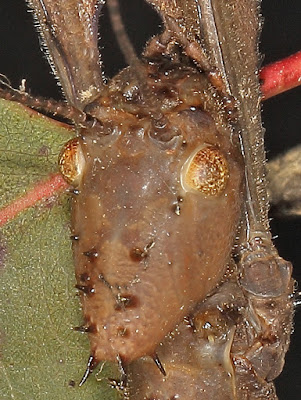 Nope, not from Star Wars

For those bent on anthropomorphism, this is an appealing face. 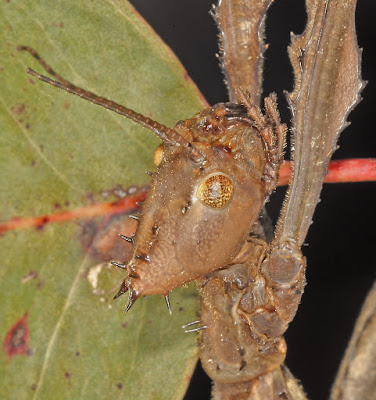 It is actually the head of a female of Macleay's Spectre, Extatosoma tiaratum (Macleay), Phasmatidiae; Tropidoderinae, for those who are technically minded. Note the mouthparts on "top". This is the normal position for the insect hanging from the leaves and branches high in tree tops. 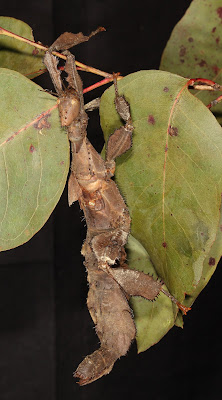 They measure 140 mm or more in length and can weigh 30-40 g. This species is known from a few populations along the east coast of Australia from central New South Wales to the Daintree of far north Queensland.

Females have short wings and are incapable of flight. Instead they spend their entire lives in tree tops where they feed on vegetation and rely on their protective coloration to avoid vertebrate predation.

Males, on the other hand, are mobile and have fully developed wings and can make flights at night. 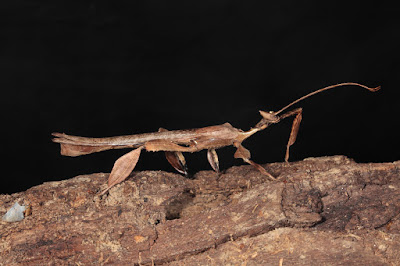 Females, at least, are long-lived. Captive individuals have lived for more than 18 months and have produced more than 1000 eggs. The eggs are broadcast by flipping the abdomen. They may take 5-8 months to hatch and once they do, the first instar nymph looks and behaves much like an ant. It moves quickly from place to place until it detects a host plant that is suitable for its development. Once this happens, it ascends the plant and moulting occurs. It undergoes 6-7 moults, gaining in size after each. If several nymphs select a small tree or shrub, they can easily defoliate it and expose themselves to predation ending their progression to adulthood.

Females can produce eggs that hatch whether they are mated or not. Those eggs of unmated females become females; mated females produce eggs of both sexes. An interesting paper dealing with this topic if by Schneider and Elgar (2010). Among other things, mated females laid more eggs over a 7 day period than those that were unmated.

Eggs of this species were probably smuggled out of Australia. Because the insect is large, spectacular and easy to keep, and can be raised on a variety of non-Australian plants, it has made it into the pet trade in North America and Europe.

We have found males of Macleay's Spectre at lights from time to time during the wet season but have never discovered nymphs or females until recently. The above tattered female was found on our house. It was missing one wing and had a slightly damaged abdomen suggesting it had escaped predation. We attempted to keep it alive but it eventually died. The abdomen was mostly empty of contents--there were only a few eggs. So it must have been at the end of its life. This is just one of about 20 stick insect species found around Kuranda. Many have specific food preferences, others will eat a variety of plants.

Schnieder, A., Elgar, M. 2010. Facultative sex and reproductive strategies in response to male availability in the spiny stick insect, Extatosoma tiaratum. Australian Journal of Zoology, 2010, 58: 22-233.
Posted by Mr. Smiley at 18:21:00 No comments: