One of the nice things for an aquarist about living in the tropics is the chance to experience the diversity of decapod stream life.
Freshwater crabs occur is several places around Australia and we have some in the streams and lakes here in the north. This little fellow is probably in the genus Holthusiana. It was found in a temporary pond during the wet season. 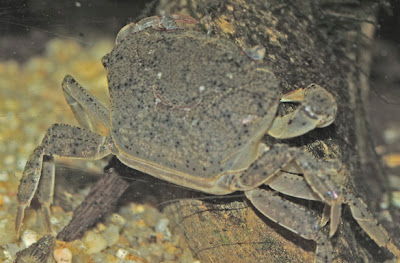 Holthusiana sp. Appears to be a small female. it has moutled at least once and does not seem to bother the fish. It feeds on plant material and flake fish food.
Each stream and lake up this way seems to have a variety of shrimp of many species in several different families. Many are quite colourful like the one below. It breeds in the community tank with plenty of fish present. There is abundant plant life that must hide the immature shrimps. 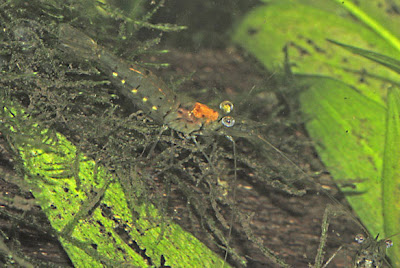 An unidentified freshwater shrimp.
Riffle Shrimp, Atyidae
These shrimp live in the fast-flowing portions of rainforest streams where they can be found amongst rocks and debris. 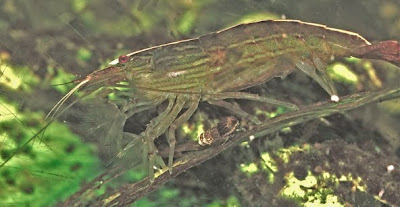 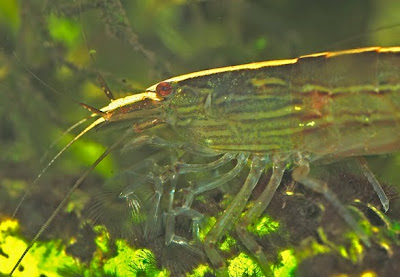 These shrimp feed by gathering plant material and detritus off rocks and plants using brush-like setae on the tips of the claws of the first and second pairs of legs.
They are fairly easy to keep in the tank. This species likes fast-flowing water and positions itself in the stream of the return flow from the filter. 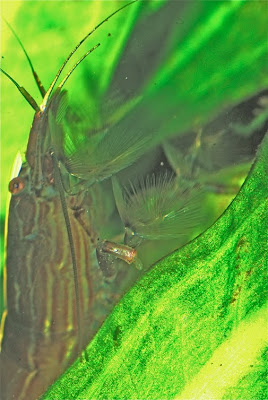 Setae on the front legs used to collect small food items.
Thanks to Keith Martin for suggestions.
Posted by Mr. Smiley at 12:16:00 4 comments: 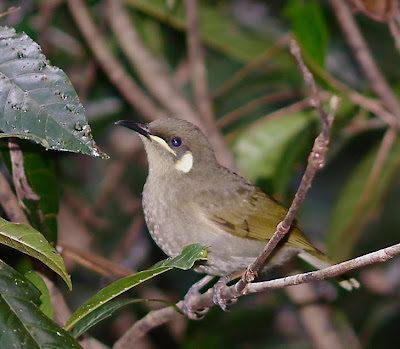 The Yellow-spotted Honeyeater, Meliphaga notata, is one of three very similar species as common residents in the rainforests and gardens around Kuranda. All three have distinct calls. This species is distinguished by its fairly large size and the yellow patch behind the eye and the stripe that runs from the bill to below the eye. It is wide-ranging extending south to Victoria.
The other species are identified as follows:
Lewins Honeyeater, Meliphaga lewinii, has a crescentic earpatch, and a more rapid song. It is about the same size, maybe a little smaller than the Yellow-spotted
The Graceful Honeyeater, Meliphaga gracilis, is the smallest of the three, has an elongate bill and a larger more elongate earpatch.

The song of the Yellow-spotted Honeyeater is loud and easily recognised.
Posted by Mr. Smiley at 15:57:00 2 comments: 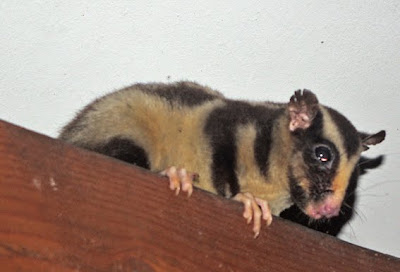 This little Striped Possum, Dactylopsila trivirgata, is a real cutie. It comes to the bird feeder night after night and enjoys hoeing into a couple of cut oranges. They are normally consider to be insectivorous but feed on fruit and leaves as opportunities arise. 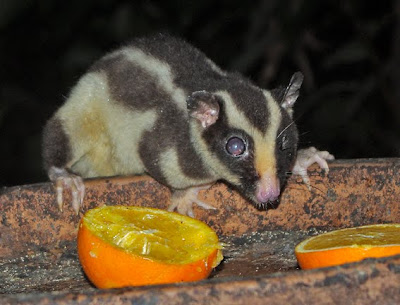 But a closer look reveals something disturbing. 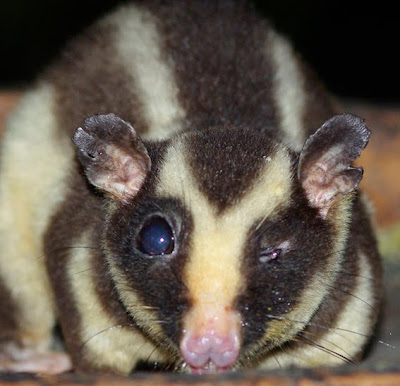 A closer look reveals that this little guy is missing his left eye and his ear is damaged as well. What could be the cause? Not a snake attack and surely not an attack from an owl. The owl would have won. Possums fight a lot amongst one another but I would doubt that a fight would cause such a seemingly debilitating injury. My friend Peter Shanahan feels this little possum was the victim of an attack from a feral cat. Seems logical.
Even with the loss of one eye, it is remarkable that the possum can make accurate jumps from tree to feeding tray and to the rather thin trunk of a tree fern without mishap. He seems to have compensated for the lack of perception caused by the loss of the eye quite nicely.
Posted by Mr. Smiley at 06:11:00 5 comments:

With the scuttling of this year's chicks, the cassowaries have developed other interests.
The other day while I was attacking our storeroom, the curious cassowaries showed up. After a bit of a look-see, their interests turned to other activities. 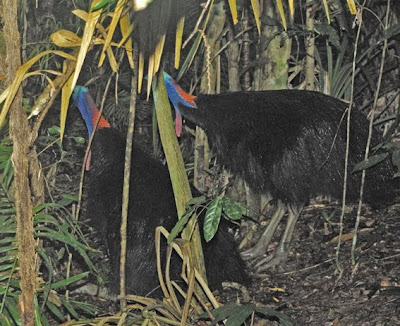 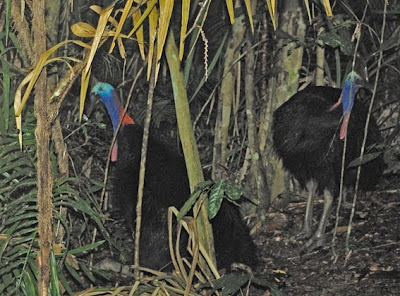 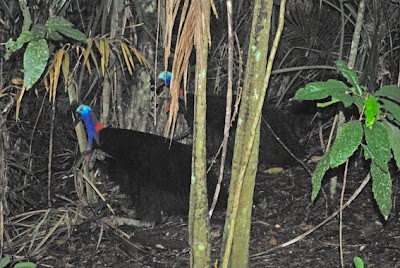 Mrs Cassowary laid down on the wet ground and Mr Cassowary approached. Both were silent. 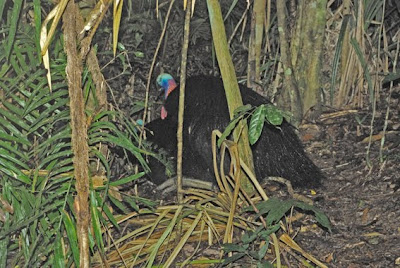 Once atop, the male would use his left leg to "stroke" the side of the female. I use the term loosely. He actually scraped her fairly roughly and I expected to find feathers on the ground.
After a while they departed. I have no idea whether a successful copulation took place, but they will doubtlessly try again. This is the second time in a few years that they have mated in nearly the same place.
My friends Sue & Phil Gregory noted that the female made a rumbling sound when they observed mating in the past.
I apologise for the second-rate nature of the photos but with birds of that size and their notorious unpredictability, I did not want to venture too close. You understand!
Posted by Mr. Smiley at 11:03:00 7 comments: 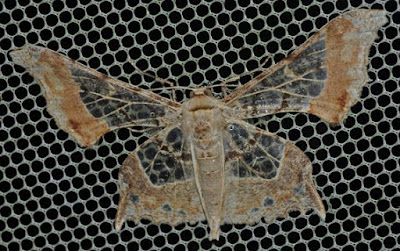 The recent spate of wet warm weather has prompted an extraordinary emergence of moths.
This is Krananda extranotata Prout, family Geometridae; Ennominae. Some years ago when I first encountered it, I thought that the generic name was a annotation of "Kuranda" but since the type species of the genus was from Bengal, it has a different meaning. The generic name probably refers to an Asian word that means "tambourine", probably a reference to the translucent appearance of the moth.
Australia seems to have only one species in the genus and it seems uncommon around Kuranda.
Posted by Mr. Smiley at 09:59:00 3 comments: