One of the failures of getting old is forgetting! All older people are familiar with this.

In the post below dealing with the fires on Kangaroo Island, I neglected to include one of my own species! It is known from only two specimens but it is distinct. It is described in the Monograph listed at the end of that post.


Requena Walker
Requena is an Australian endemic genus known from 15 species that live in heath habitats in the southern portion of the continent. They are all micropterous (very short-winged) and live close to the ground where they prey on small insects. They have distinctive calls and colour patterns.

Requena kangaroo Rentz is distinct in the black markings on the head and legs. Only the type male and an old female specimen collected by Tepper over 115 years ago are known. I assume the species is at least as common as the others. I just did not find more than a single male (the type). So it may be of conservation interest. As luck would have it, I did not photograph the male from Kangaroo Island, the only locality from which the species is known. Photos of other species are appended here. 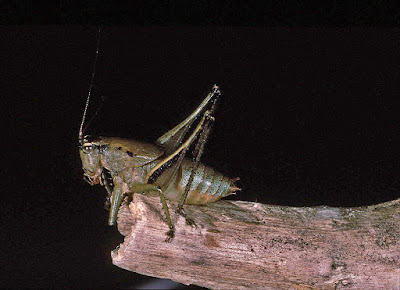 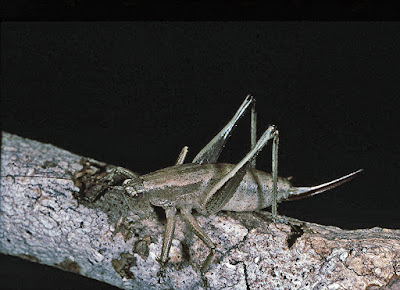 
The return of almost daily thunderstorms from mid-January has seen the return of many insects to the light sheet. This is quite surprising because the prolonged drought would lead one to believe that populations might be reduced and take some time to return to normal.


With the orthopteroids that have made their recent appearance, it seems that there is a high percentage of individuals carrying Gordian Worms (Nematomorpha). I have found parasitised grasshoppers, katydids and cockroaches and mantids.

Horse-hair worms are so-called because of their appearance and often when encountered they appear as a Gordian Knot. When not in their insect hosts the worms are often found in puddles, streams or even horse troughs. But how do they get there?

Much more study is needed to understand the biology of Australian Nematomorpha. Poinar and Weissman (2004) present the potential life cycles for some North American species. It seems that several hosts are involved. An infected insect is "directed" towards water. There the worm emerges and the host dies. In the water the worms mate, lay eggs and the eggs are ingested by an aquatic insect which is eventually eaten by another host. The larva of the worm bores through the host's gut and resides in the body cavity where it feeds on haemolymph, testes and ovaries. This, of course, renders the host sterile. But it continues to live and may even moult with the developing worm within.

2019-20 has seen an inordinate number of parasitisms in the rainforests around Kuranda. Reasons for this are not known.

See this but not whilst eating:  https://www.youtube.com/watch?v=YB6O7jS_VBM 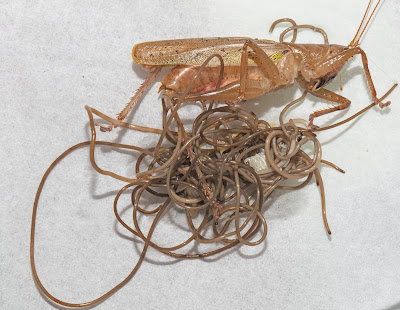 This adult male katydid had multiple worms within its body cavity. It is surprising that such a mass of worms could come out of a small katydid. 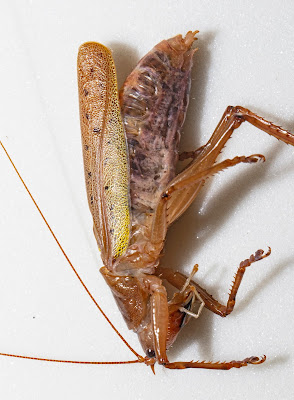 The darkened abdomen of the host reveals its contents-many Gordian worms. 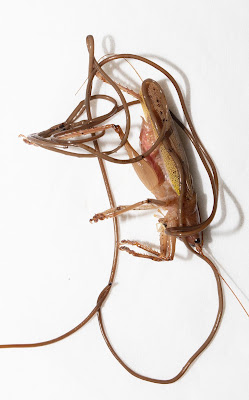 Another katydid with the live worm emerging. One worm measured 26 cm, the other 28 cm. Both were within the katydid. 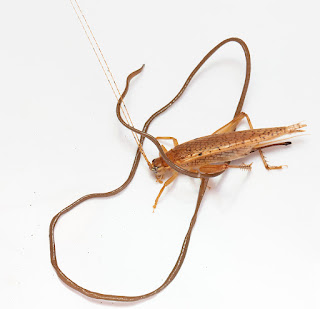 Crickets are also infected. Thi is an adult female Unka boreena Otte and Alexander  with the worm emerging. 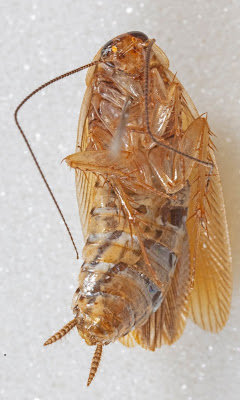 This tiny blattelline cockroach, Beybienkoa kurandensis Roth is infected. The worm, probably a different species from the ones above, can easily be seen through the integument.

Mantids, such as the Snake Mantid, Kongobatha diademata Hebard have been infected this year. The factors causing this increase in the number of Gordian Worm infections are at this point only speculative.

Thanks to George Poinar for comments on Gordian Worm parasitism.

The Buch Stone-curlew or Bush Thick-knee, Burhinus grallarius, are common birds in the Australia tropics. They are known for their  wailing, almost human-like calls heard at night. Often several birds join in a chorus. For the initiated, the first experience hearing this can be confronting.

During the day the birds stand around or squat under trees, often within metres of human activities. The species used to be common all over Australia except in the arid centre. Introduced foxes and cats have reduced their numbers. In the northern tropics foxes do not occur and feral cats are often the dinners of local pythons.

The birds feed at night on insects, lizards and small mammals. They breed from July to January. They build no nest but cobble together a few stones under a tree and lay up to 3 eggs. In Cairns hotel foyers are ideal nesting sites as are the shaded, plantings around school and university buildings.

During the recent drought temperatures in far north Queensland reached into the high 30's (Centigrade) but that did not deter the birds. Here a pair had been nesting on the property for more than 15 years. So when it was time to do their thing, they did it despite the heat. 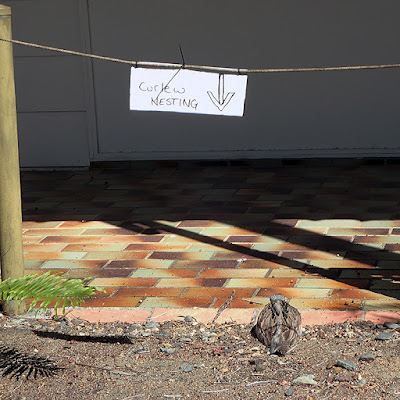 This female is not sick or dead but it "incubating" an egg. The temperature of the ground would have been much higher than the 35C of the air. She maintained this position for days. 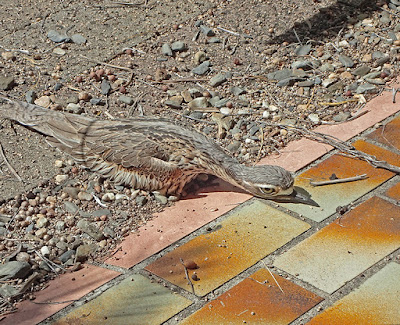 The egg did not survive. It must have been hard-boiled! But the female survived. (There was ample water within a few metres of her "nest".

Peter Shanahan has agreed to share some of his curlew photos taken in his driveway. 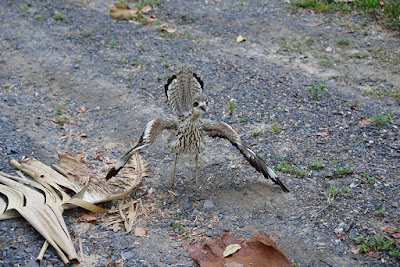 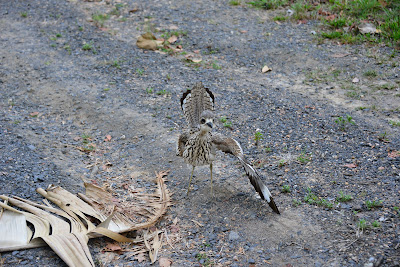 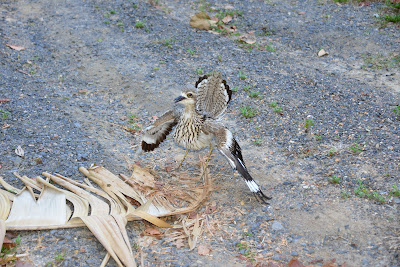 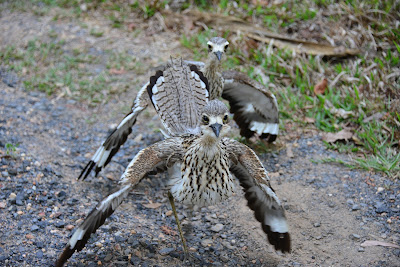 Two excited birds are more effective than one! 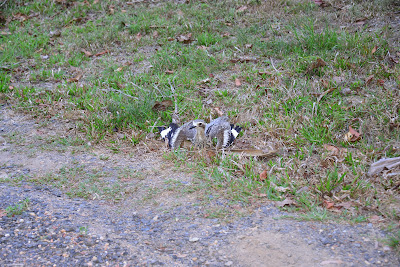 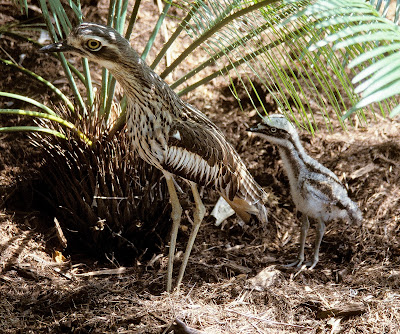 A mother and chick in the shade during the day.