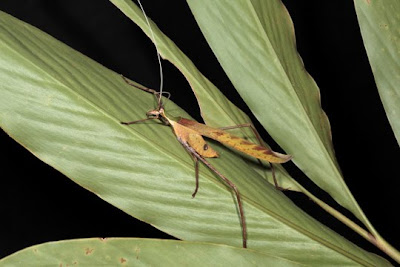 The Balsam Beast, Anthophiloptera dryas Rentz & Clyne, was described some years ago (Rentz & Clyne, 1983) from a suburb near Sydney. Ms Densey Clyne had been observing the species in her garden for some years and noted that they had a distinct predilection for her Balsam flowers ( Impatiens glandulifera). She eventually observed the unique appearance of the nymphs and noted that the short blade-like ovipositor of the female was used to deposit eggs in the cracks of bark in the trees where they were normally found. The Australian National Insect Collection, Canberra, where I worked at the time, had a few specimens as did the Australian Museum in Sydney. It was determined to be an undescribed genus in the endemic katydid subfamily Zaprochilinae. This group is an oddity in that its species live on flowers and/or pollen and nectar. The geographic range of the species was rather extensive for a katydid based on the few specimens in the museum collections. One old specimen was labelled "Cairns, Qld." The Cairns vicinity had been fairly well visited by entomologists over the years and one would have thought, if the record was accurate, others would have turned up by 1983. [For extensive discussion of this group and the taxonomy and biology of zaprochilines see Rentz ( 1993)] So it was with some relief when the first specimens of this large and beautiful katydid turned up at the lights shortly after arriving in Kuranda a few years ago. They are probably more common than one is lead to believe but because they live in the trees and feed on flowers, they are not often seen. Their stridulations, a low buzz, can be heard regularly with the Mini Bat-detector. 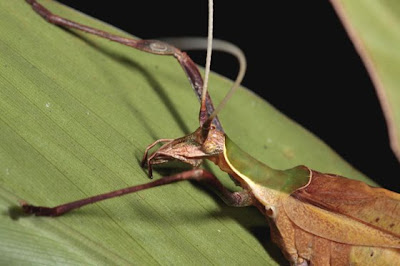 The heads of all zaprochiline katydids are prognathous. This allows them to dip deep into flowers and either sip nectar or eat pollen. 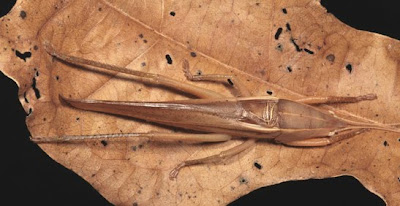 Meet Broughton's Snout-nose, Euconocephalus broughtoni Bailey. Named after a British educator of researcher, Bill Broughton, this species must have an interesting biology but it is a mystery at this point. It is seldom found at our lights. When it does show up, you can count on more than one individual. On 7 November 2009 one female and 4 males were collected. Are they on the move? Do they fly distances at night? They were found only in April, July, October, November, December since 2004. I have not seen them during the day. If they are typical of other copiphorines (Conocephalinae; Copiphorini) they are seed eaters and the thick head is full of muscle to enable the powerful jaws to crack grass seeds.
The above photograph is of a male. The vertical "line" at the base of the wings is the vein that has on its underside the stridulatory file with which the male produces its characteristic calling song. There are two colour morphs in this species, brown or green. The individual below is a female. 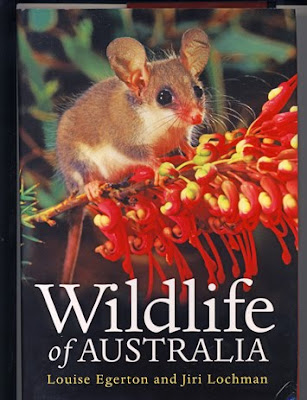 A new book has appeared recently "Australian Wildlife". This book combines the superb wildlife photography of Perth resident Jiri Lochman and the writings of Louise Edgerton. The book is a wonderful compendium of mammals, birds, frogs, reptiles, freshwater fishes and invertebrates.
There are more than 550 colour photographs that accompany accounts of how these animals have developed as a response to their climate and habitat. The biology of these animals is discussed and contrasted with other animals throughout the world.
This is not the usual treatise on the Australian biota but you will find photos and discussion on the biology of some of the little-known animals that you may know little about.
This book would be a fine addition to any library and well worth having as a reference to the Australian fauna.
Publication details as follows:
Wildlife of Australia. by Louise Edgerton & Jiri Lochman. 448 pages, Allen & Unwin Press 2009.
Posted by Mr. Smiley at 09:20:00 No comments: