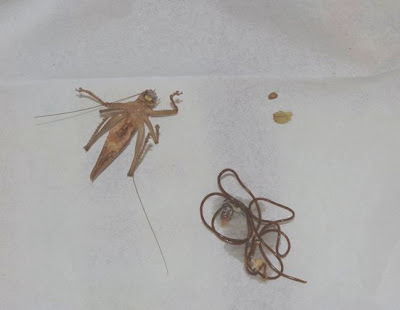 Anyone who has collected orthopteroids insects (grasshoppers, crickets, katydids and their relatives) is familiar with Horsehair worms. These are internal parasites in the phylum Nematomorpha. These worms are internal parasites of a number of kinds of insects and some Crustacea. They develop inside their hosts and eventually emerge late in the life of the host insect. They had not been considered as an effective biological control because they kill the host late in its life. However, it has been my experience that their presence sterilises the host so that it does not reproduce. So they have some effect on the reproduction of the host. The katydid pictured here had two eggs in its abdomen. Whether they were fertile or not, who knows?

I am always amazed at the size of the worm that emerges from the host insect. The host must have a most uncomfortable life with this huge parasite in its abdomen. Why are they called Horsehair Worms? In the early days, the worms were often found in horse troughs. Their size and colour resembles the hair on a horse’s mane and some mistaken souls believed that the horse’s hair had actually come to life! In actual fact, the parasite attacks the brain of the host causing it to seek water and drown when it’s time for the worm to emerge. This is often after first rains and one can find worms in puddles breeding. They often wrap themselves in bundles and have thereby received the common name Gordian Worms because the resemble the famed “Gordian knot”.

What is not well known is how the host insects become infected in the first place. Many of the species that bear these worms have nothing to do with water. Mantids, for example are frequently infected. Perhaps, they pick up the worms in the insects they eat. But many grasshoppers are not predators. How do they become infected? Perhaps, there are a number of modes of infection. In any case, as often as I have seen these creatures, I am always taken aback and “feel” for the poor host ho must have had a hell of a stomach ache!
Posted by Mr. Smiley at 09:09:00 3 comments: