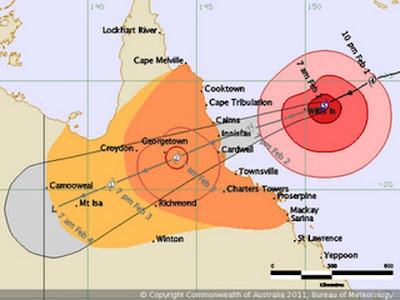 For most of the tracking of Cyclone Yasi, it appeared that it would make a direct hit on Cairns. But at the last minute on the 3rd of Feb. 2011 it diverged slightly to the south sparing Cairns from a major disaster. Tidal surges and water to more than a metre in the business district was predicted. But all of that went south to the vicinity of Silkwood, Mission Beach, and, to some extent Innisfail. You may recall Cyclone Larry some 5 years ago hit Innisfail head-on and caused much destruction. Those poor folks were just about recovered when Yasi made its appearance and suddenly veered south. The path of destruction of Yasi stretched from Port Douglas in the north to well south of Hinchinbrook Island.
Cairns did not escape without some damage. Many big trees were felled and a few buildings were flattened. The Botanic Gardens seem to always take the brunt of these cyclones. The gardeners told me that it was not as bad as with Larry, but it was still a mess. Several big trees and palms came down. On the positive side, if there is such a thing with cyclones, it opened the canopy a bit and is letting light in where it had been dark for years. This will accelerate growth for plants in those areas. There was no major damage to buildings.
Curator David Warmington has provided a few photos of the damage cause to the Gardens by Cyclone Yasi. 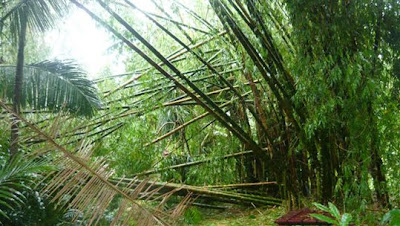 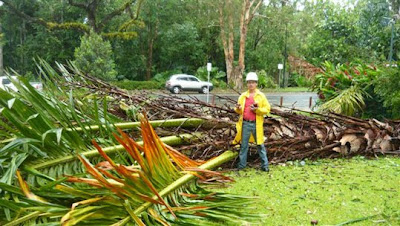 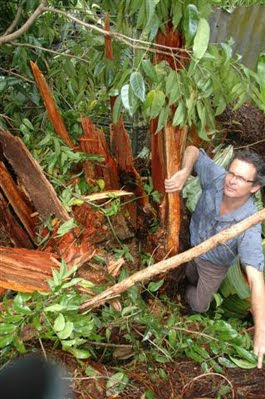 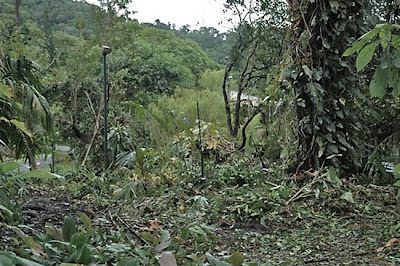 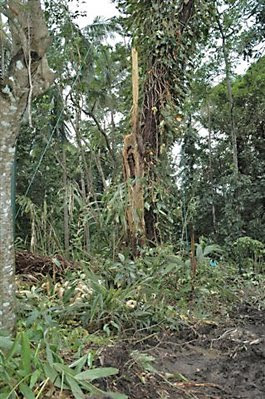 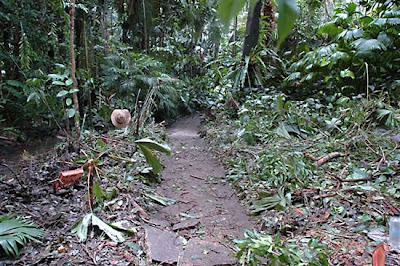 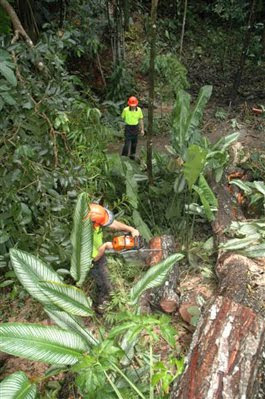 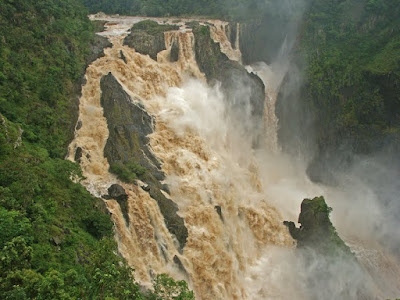 The Barron River Falls at Kuranda just after the cyclone passed--water and silt heading towards tot ocean---and the Great Barrier Reef. Buck Richardson photo
Posted by Mr. Smiley at 20:50:00 No comments:

Most of us hear the very low pleasant sounds of crickets coming from the undergrowth in the rainforest or along rainforest margins.

Most crickets are classified in the family Gryllidae. There are currently eight subfamilies in this large family. Recently some taxonomists have elevated some subfamilies and tribes to full familial status. As an example, the Mole Crickets, once considered as a subfamily of the Gryllidae, are now considered in their own family, the Gryllotalpidae. In addition, the Scaled Crickets are now in their own family, the Mogoplistidae. Most taxonomists follow the classification presented on the Orthoptera Species File (OSF). This is an active catalogue of the Orthopteroid insects of the world. (http://orthoptera.speciesfile.org/HomePage.aspx). It is kept up to date and a Committee adjudicates on controversial matters.

Cricket songs, when compared to those of katydids, are melodious to the human ear. Katydid songs are more metallic, buzzy or tinny. The pitch (carrier frequency) of the two taxa is usually very different. Cricket songs have pure carrier frequencies between 2000 to 9000 cycles per second. Katydid sounds are generally much much higher in frequency.

Here I present the Calling songs of two cricket species. One is a widespread species, the other more local.

Homoeoxipha lycoides (Walker) seems most at home in tall dense green grasses. The crickets can be found in their greatest numbers along roadsides and forest margins. Numbers can be large and the sounds of an aggregation of calling males are very distinctive, though very low in volume. Males sing mostly during the day and early evening. These crickets are often attracted to lights. The call is a continued, prolonged wavering trill, a series of pulses. The pulses come at about 51 per second in distinct groups of 8. The wingstroke in this species is much greater than that described below for O. coorumbena.

Ornebius coorumbena Otte & Alexander is nocturnal. The crickets occur in low shrubby vegetation in the rainforest to about 2m. They feed on detritus that falls from the canopy onto leaf surfaces. They are not usually attracted to lights. Their calls can be the dominant cricket sound at certain times of the year. Males call, isolated from one another, never in aggregations. The song consists of groups of pulses (chirps) with 7 pulses separated by about a second. Each of the 7 pulses corresponds to a wing closure.
These notes served as the basis for an article in Audio Wings. This is the journal of the Australian Wildlife Recording Group. There are two issues a year containing articles dealing with wildlife sounds ranging from insects to birds, mammals and reptiles. There are important reviews of new recording and analyzing gear. A workshop is held every second year in the field where wildlife recordings are made, analyzed and techniques compared and reviewed.
For more information on this club, contact the President, Mr Fred van Gessel fvangessel@optusnet.com.au
Finally I am very grateful to Mr Ken Hickman who has helped me to understand the fairly complex nature of embedding sounds into this blog. Thanks Ken.
Literature
The "bible" for Australian cricket information is:
Otte, D., Alexander, R. D. 1983. The Australian Crickets (Orthoptera: Gryllidae). Academy of Natural Sciences of Philadelphia, Monograph 22. Pp 1-477.
This book is available from the Academy of Natural Sciences of Philadelphia or over the web.
Posted by Mr. Smiley at 19:24:00 No comments:

A Couple of Big Fellows 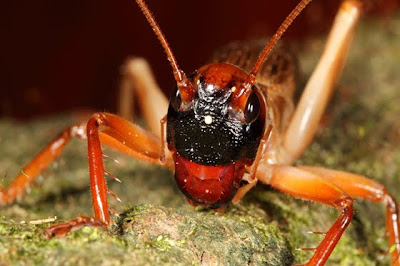 A wander in the rainforest after dark can reveal creatures you would not normally se during the day. Meet a Raspy Cricket, Chauliogryllacris sp., family Gryllacrididae. This large insect is soft-bodied and would desiccate if exposed to the drying condition of sunlight and wind during the day. It's massive head conceals mostly muscle that power the mandibles. Although it can give a painful bite, it is an omnivore and feeds on a range of foods ranging from other insects to fruits and seeds.
The mandibles are used primarily to dig into rotting wood where it makes a burrow and covers the entrance with silk fibres that it produces form its mouthparts. This is a characteristic of the family Gryllacrididae. Nymphs as well as adults produce silk.
the white spot in the centre of the head is the median ocellus. The two small yellow spots just above the first antennal segment are lateral ocelli. The function of these "eyes" varies from one group of invertebrates to another but here they may be involved with a homing behaviour that is similar to that displayed by ants. Raspy crickets "take a picture" of their surrounds before they move out for a night's marauding. This enables them to return to their burrow and not have to expend the energy to construct another. 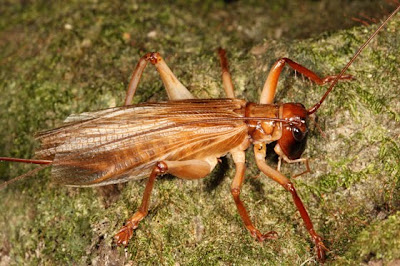 Chauliogryllacris is a big cricket. The body of this female measured 50 mm. the antennae were extraordinarily long, measuring 165 mm. 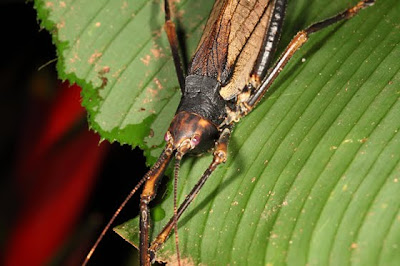 The Queensland Palm Katydid, Segestidea queenslandica, has been featured several times in this blog. This is an unusual dark form. It is big with the body measuring some 90 mm from there head to the tip of the wings. This species is facultatively parthenogenetic, that is unmated females can produce eggs that hatch. The hatchlings are always females. Males in this species are rare but this year on one night three were heard along the Kennedy highway near Kuranda. They were singing from Wait-a-while vines (Calamus sp.) high in the trees. This was the first time I had heard this species even though I have encountered dozens of examples over the years. Soon I'll present a recording of the song of this katydid.
Posted by Mr. Smiley at 13:50:00 1 comment: