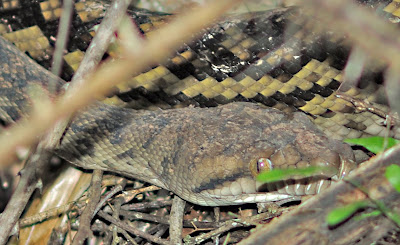 Looking out the back of my shadehouse I noticed Mrs Python keeping an eye on things in the morning sun. This is the Amethystine Python, Morelia amethistina. Australia has the greatest diversity of python species. This species is one of the 5 largest snakes in the world with some whoppers being as much as 8m (28 ft!). These are rare and probably very old when found. Pythons resemble the Boas of the New World but differ in several respects. For one, they lay eggs, boas have live babies. Mrs Python incubates the eggs and using shivering techniques to keep them warm. 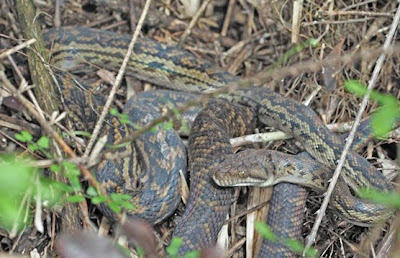 This individual is a big one, about 3-5m long. It has been out on a pile of dead branches for several mornings. It lives in the hollow bole of an adjacent tree. We hope she does something to reduce rat numbers as these rodents cause a great deal on inconvenience with their house-keeping under the bonnets of cars parked overnight.
Posted by Mr. Smiley at 11:54:00 5 comments: 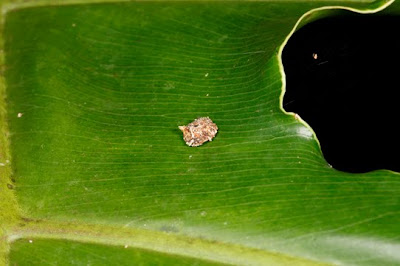 I noticed this little lump on the surface of a broad-leafed ginger. 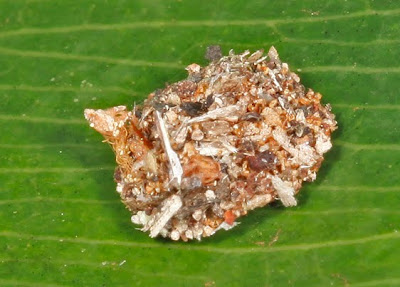 Then it started to gyrate around on the leaf. Up close it contained bits and pieces of dead material bound together by webbing. Flipping it over revealed the owner. 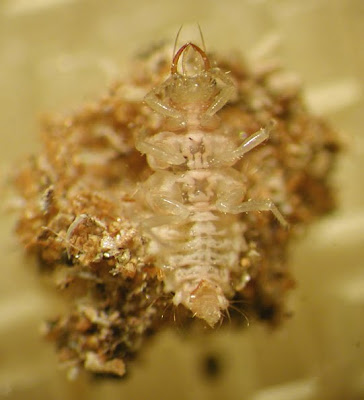 This is the larva of a Green Lacewing. Green lacewings are members of the order Neuroptera, a large group of more than 6000 species, many of which are quite familiar to you. Green lacewings, like other neuropteroids, are predaceous. This larva uses the camouflage to ambush small insects. The debris is carries around also serves to protect it from predators like birds and lizards. The debris is often composed of the dead bodies of its prey! The larva uses the mandibles to subdue small insects and spiders and then sucks the contents dry. Green Lacewings have been used in the biological control of insects.
Posted by Mr. Smiley at 05:46:00 1 comment:

A pair of Stilt-legged Flies doing what Stilt-Legged Flies do. They are members of the Micropezidae, a family of about 50 genera and 500 species worldwide. They are most common in the tropics. This is species of Mimeogralla. The adult flies are not uncommon on leaf surfaces during the day where they hunt small insects such as Springtails. They make themselves obvious by waving their front legs in front and over their heads much in the manner of a wasp flicking its antennae. This may afford some protection form predators that might not like to take on a wasp. The larvae of this species are said to live on ginger roots. This seems a likely scenario as the adults were photographed on ginger leaves. 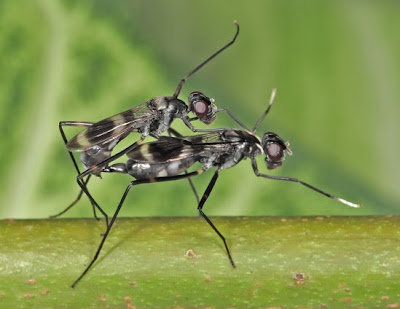 This pair seems to be a different species from the ones photographed below. Note the eye colours. The female is the lower fly and has her front feet tipped in white. Since they are held out in front to resemble wasp antennae it is noteworthy to mention that many invertebrates have either white-tipped antennae or white rings just below the tip of the antennae. I have always wondered what this means. I've seen it on several continents and even with an ichnemonid wasp with white subannulations on its very long ovipositor. Some information is being transmitted here but I can't interpret it. Take a look around your garden and see if you can find insects or other invertebrates with white-tipped antennae. I'm sure you will be successful. 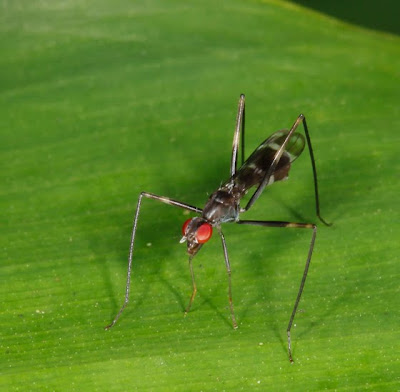 Large eyes are important if you are a diurnal predator. 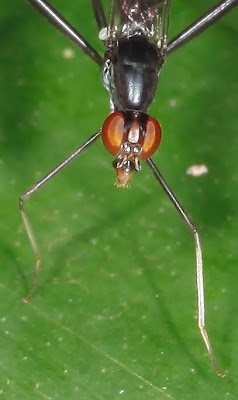 The mouthparts can be clearly seen on this fly. It consumes the contents of small insects by sucking them dry! 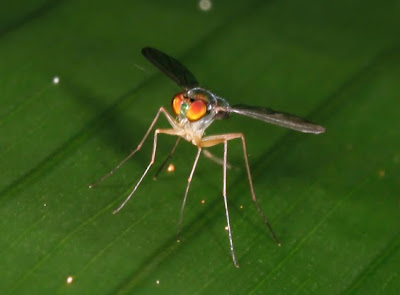 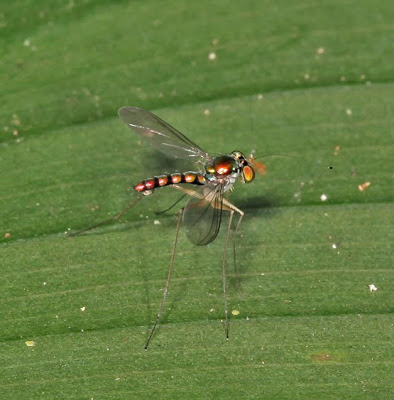 As long as we are on the subject of flies, the above is tiny member of the Dolichopodidae. This is a much bigger family with more than 7000 species in about 230 genera. Many are iridescent and glisten metallic green or yellow in the sun. They are very active and often have small, temporary territories. The adult feed on small insects. This little fly just did not want his photo taken from above and perfectly synchronised his flight with the operation of the flash. When confronted head-on, the fly did not flinch. 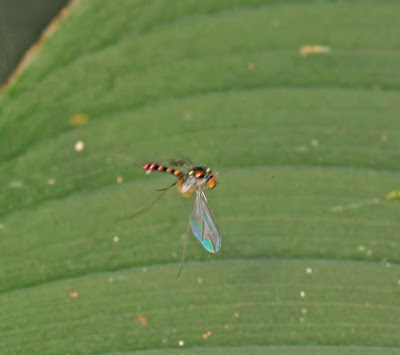 With the more than 19 days of steady drip or drizzle it is a pleasant experience to wonder through the rainforest, night or day, and see what's on offer. The other morning a single log had a group of Handsome Fungus Beetles actively wandering about. The looked like they could be feeding. The red dots are mites and some of the mites were crawling on some of the beetles. Just what this was all about, I can't determine. Twenty-four hours later in the sunlight the beetles had moved off the log and were scouring a fallen palm frond, frantically searching for food, I suspect. 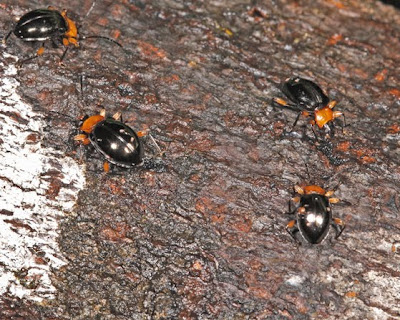 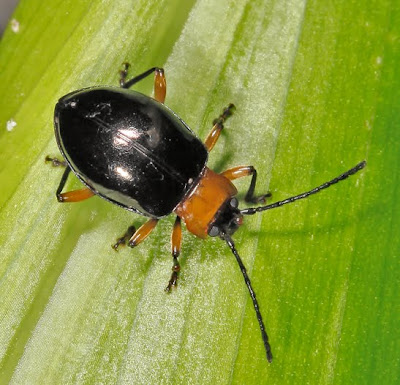 A Handsome Fungus Beetle, Encymon immaculatus.
I sent photos to my friend Paul Zborowski for confirmation of the identification. It turns out that it is Encymon immaculatus (Montrouzier). He suggested I look at the Plate 5G in the tome The Insects of Australia (1991) for a lovely colour drawing of the species. Then I proceeded to google the species' name and came up with a surprise.
The "definitive" work on the subject was one published in 1971 by H. F. Strohecker. He stated that E. immaculatus is extremely common and was known from many localities east of Wallace Line including Japan, Aru, New Guinea, New Britton as well as New South Wales and Queensland. But may I digress?
This brought back memories. The late Dr Strohecker (or the Colonel as he was known) was a specialist in the Endomychidae, the Handsome Fungus Beetle family, and also a keen orthopterist (one who studies grasshopper, katydids, crickets & their kin, like I do!) . In the 1960's he was contracted to provide a California Insect Survey Bulletin on the grasshoppers of California. To this end he had to describe many new species to make the Bulletin comprehensive. I was a student at UC Berkeley at the time and came into contact with The Colonel and sent him material and even met him on one occasion. All this eventuated in a 1968 Bulletin of which I was one of three authors, the others being Strohecker and my professor, W. W. Middlekauff. 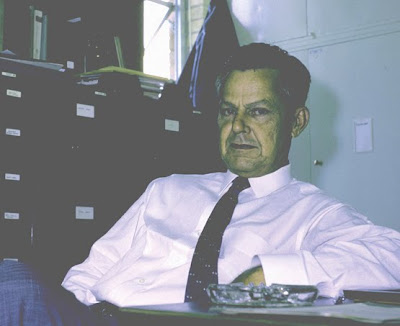 Dr H. Fred Strohecker in Washington, D. C. 1963.
But I digress again (which is what you can do in a blog!). In the Australian Beetles, Lawrence & Britton (1994) state that endomychids are said to feed on fungi but very little is known on the habits of Australian species. Some inhabit termite mounds where they feed on fungi. Maybe I should keep watching my E. immaculatus to see what they prefer. As you can see from the blogs below, there is no shortage of fungi in the rainforest.
References
Lawrence. J. F., Britton, E. B. 1994. Australian Beetles. Melbourne University Press, Carlton, Vic. 192 pp.
Naumann, I. (ed.). 1991. The Insects of Australia A Textbook for Students and Research Workers, Vols. 1, 2. Melbourne University Press, Carleton Vic. 1137 pp.
Strohecker, H. F., Middlekauff, W. W., Rentz, D. C. 1968. The Grasshoppers of California. Bulletin of the California Insect Survey, 10: 1-177.
Posted by Mr. Smiley at 10:16:00 3 comments:

Things the Glow in the Night 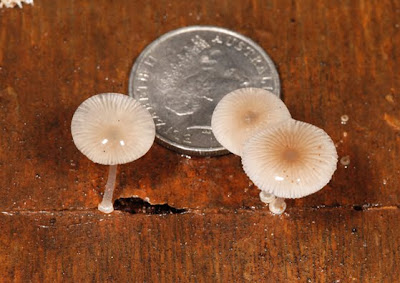 We have had about a week of more or less continuous rain (or as the Bureau of Meteorology puts it, "showers") and, as usual, the power went off in the night, this time for 6+ hours. I woke up and looked on our deck to find it aglow. These little toadstools were shining with a whitish glow. Pretty neat.
Posted by Mr. Smiley at 10:32:00 No comments:

The Wet Season brings out the best in fungi. It has been said that fungi probably return more nutrients to the rainforest than do insects. They are everywhere and in huge numbers. Many are so small or live in places that they are easily overlooked. After many weeks of rain, they just "appear".
These puff balls cover an entire downed log that has been setting in the forest for years. But this is the first time I have ever seen such a bloom of these fungi. Expecting to find many insects and other creatures feasting on the fungi, I was disappointed not to find a one the other night. But I'll keep looking. 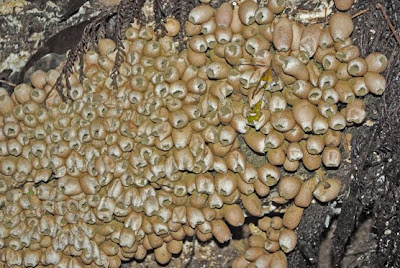 A portion of the fallen tree laden with Puff Balls. 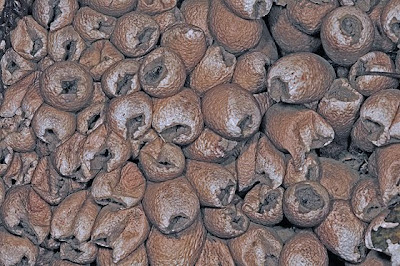 Puff Balls are bags of spores that blow around in the wind or are tracked around by creatures that walk over them. You can just imagine the numbers of spores represented here. 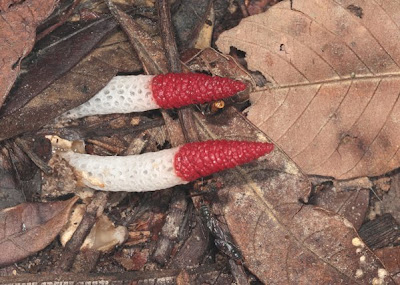 This is a wonderful Stinkhorn Fungus that really looks artificial. Some are in excess of 50 mm in length and stick out of the soil, sometimes in a linear sequence of a metre or more. This is the first year I have seen such fungi.

Fungi attack all sorts of organisms. This katydid (Austrosalomona sp. 10) may not have been killed by the fungus, but it is being consumed by a fungus that will return its components to the soil. Fungi have a most important role in recycling.
The Australian National Botanic Gardens has a wonderful Fungus Site that will educate you on the kinds of fungi and their role in our environment. It is well worth a look.

The most common threat living in a rainforest is not being eaten by leeches or constricted by monstrous snake but being hit by fall vegetation. There are some real widow-makers up there. Dead branches falling from great heights can impale and decapitate. Clumps of basket ferns (Drynaria species) often fall under their great weight when wet.
We had one such incident this wet season. A huge dead tree had a massive overhanging branch laden with fern epiphytes and a tangle of vines. One night it came crashing to the ground. It would have weighed tonnes. It did no damage to buildings but did open the forest a bit. It will be instructive to watch what develops in the open patch created by the crash. 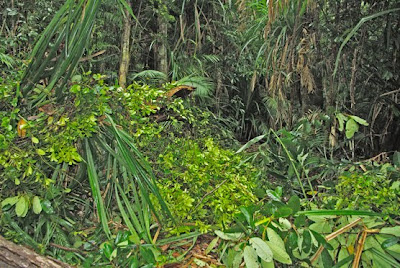 Disaster Zone. After the fall. 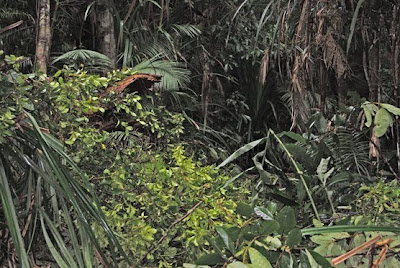 Broken trees, crushed vegetation, lives disrupted. But this is just what the doctor ordered for many other insects and plants. I expect to see many wood-boring beetles and wasps once the weather warms up. Butterflies will alight in the sunshine on the vines and lay their eggs on regrowth. 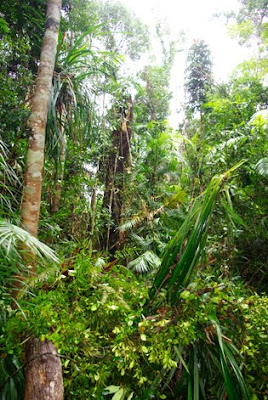 The culprit. The tree snapped off leaving a large hollow and providing tonnes of dead wood on the ground for fungi, insects and crustacea to recycle into the system. 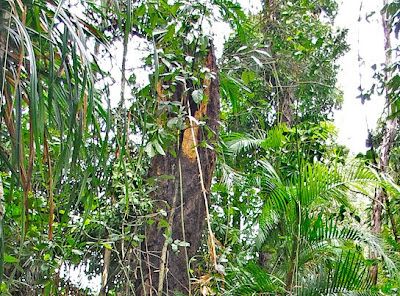 This hollow has created an opportunity for one or more creatures to use as a temporary shelter. Kookaburras, not normally seen in our rainforest, have already looked over the real estate.
Posted by Mr. Smiley at 17:07:00 No comments: