It seems appropriate to revisit a recent blog: A Beautiful Day in the Tropics

Thornton Beach, north Queensland
This is approximately the same spot where the woman was taken by a crocodile yesterday evening. The entire area is well signposted and it is a notorious place for crocs. With Cooper Creek adjacent to Thornton Beach, it is ideal crocodile habitat with sandy beaches and fringing mangroves. In fact there is a small tourist business there with a boatman who takes people on tours of the mangroves to see the crocs in their natural habitat. In a few minutes time he has them observing crocodiles in nature.

It is very bad judgement to enter the water during the daytime and unthinkable that one would do so after dark. After dark is the time the crocs do their serious hunting. These women were sitting ducks for a large crocodile. As you can see from the photo below, they are known to the frequent the area. It is even very poor judgement to walk along the shoreline after dark as the crocs often venture onto the beach and wander into the strand flora. In doing so, a beach walker would place him or herself between the croc and the water- a deadly combination.

And being the election season in Australia, politicians have entered the discussion with one bringing in the old chestnut of time to consider a "croc cull". What is the advantage of that? Most tourists who come to north Queensland want to see two icons: the Great Barrier Reef (dying due to the effects of climate change and poisoning by agriculture) and crocodiles. Topline predators are always sought after by tourists. It is true in Africa with lions, India with tigers and Alaska with Polar bears.

And what would a croc cull solve? Would anyone feel safe venturing into those waters after same? There just might be one left that avoided the hunters guns. Who would want to be the first to enter the water?

It's best for people to use their heads and heed the signs. It's the crocs place. Let them be and treat all activities in that region with CAUTION. 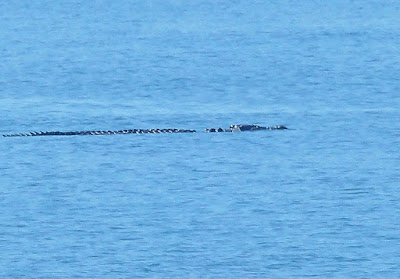 All Those Little White Moths

On the evening of the 12th May 2016 there was a mass emergence of little white moths called Chamaita barnardi (Walker). They were so numerous they appeared as snowflakes. The tiny moths seemed to be everywhere in the Kuranda area even on the busy Kennedy Highway leading to Cairns. As far as I can tell, the larvae are unknown. The following night, there were not so many. 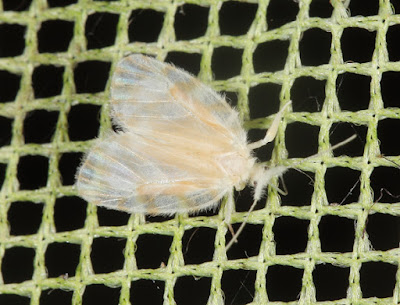 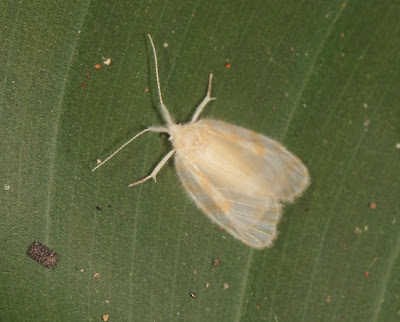 These moths measure only 5-6 mm so there must have been millions of them emerging at approximately the same time. What triggered such an emergence and where where the larvae?

This little moth seems to be seasonal. It is not always found at lights as are the two below.

All belong to the Tiger Moth Family, the Arctiidae, and are placed in the subfamily Lithosiinae. I have dealt with these moths before in this blog.

Other members of the Lithosiinae were found at the lights with the little moths: 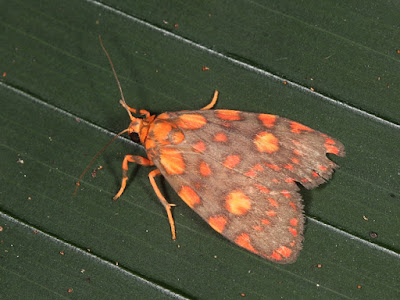 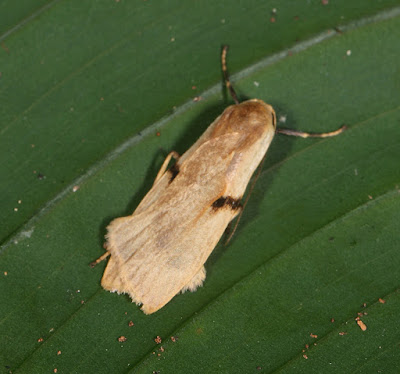 Meet the New Mrs--Cassowary, That Is 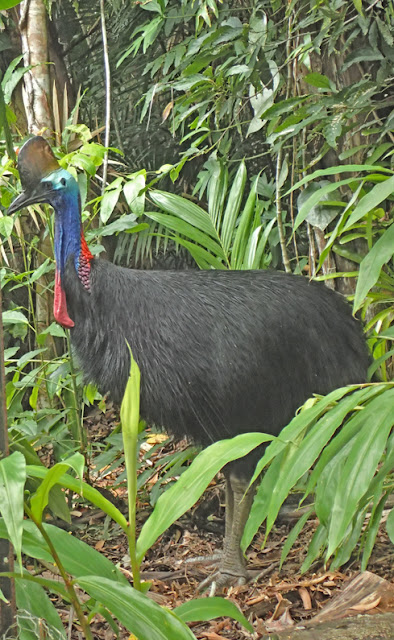 well here she is. She seems much larger than the other two female cassowaries we have had here. She has been named "Socks" because of her large, paired wattles. She seems to be a young bird. The feet are not scarred and the casque is smooth and even and without notches that accompany older birds from their trampling in the forest. 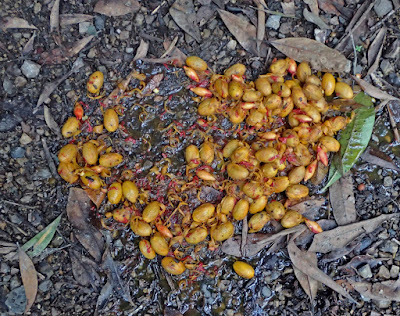 This poo sample consists mainly of palm fruits. She returns several times a day to feed as more fruits drop to the ground. Birds and mammals will feed on the exposed seeds and most will be carried off within a few days.
Posted by Mr. Smiley at 15:57:00 1 comment: