It's been a cold "winter" in the tropics. No freezing temperatures at Kuranda but many nights around 10C or lower. I am told that this "cold" weather usually only last a few weeks but this year it has been continual since May.

A few things have been showing up at the lights, especially if there is some moisture in the air and if is a bit windy. With the orthopteroid insects, there have not been many but those that have been see are worth noting.

Many orthopteroids have a single generation per year. In the tropics there are some that have continual generations, others that are very seasonal and still others that hang on during the winter months. It is the latter, the rainforest crickets and katydids that overwinter as adults that are dealt with here. A study of seasonality of insect species in Panama revealed that some 37% occurred throughout the year and the others have distinct seasonal periods of adult activity. It is too soon to offer a figure for the orthopteroid insects for this site in Kuranda.

This is not an exhaustive list, nor is it complete. It is just an observation based on this winter. I maintain a database of all the orthopteroid insects ( and earwigs) that I see at this site in the Kuranda rainforest. I keep a log of the dates they are seen.

It is peculiar on another note that some katydids and crickets that might be commonly seen one year may go unseen for several years hence. Just what it is that influences this type of phenomenon requires some very detailed work. Could it be some host plant that comes and goes? Are there climatic conditions that affect these species? For example, could fungus attack these species more voraciously during wet periods and thereby reduce their numbers?

Here are a few examples noted this year of orthopteroids that overwinter as adults, at least in the Kuranda rainforest. 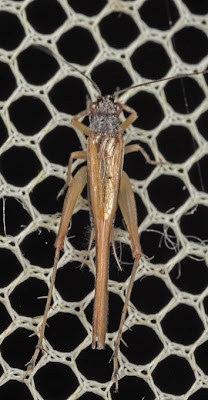 This little leaf-running cricket seems especially common this year. It has been found in the mixed eucalypt forests in the Mareeba area. 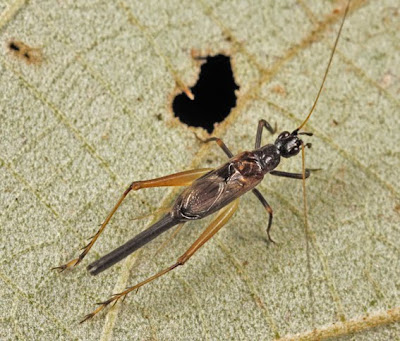 This species is widespread throughout the Pacific and Asia. Its incessant chirping calls have been reported before in this blog. They seem to sing most warm days and evenings throughout the year.

This is one of many "silent" crickets. These will be the subject of a future blog. This is the commonest of five species in the genus found at this site. It lives on the ground in leaf litter and has been found at the lights every month of the year and usually each night.

This species has only recently been discovered in Kuranda. It is known from the Atherton Tableland to Mt Lewis, Qld., so it is not really surprising to find it around Kuranda. It is a predator and matures throughout the winter with adults appearing in early spring. It has been recorded each month of the year. This species is nocturnal and feeds on a variety of small insects. It can be observed nervously searching leaves of rainforest shrubs and trees after dark. 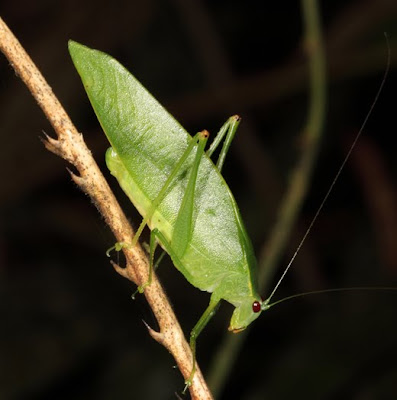 This katydid is known only from the rainforests in Kuranda where adults have been observed every month of the year. 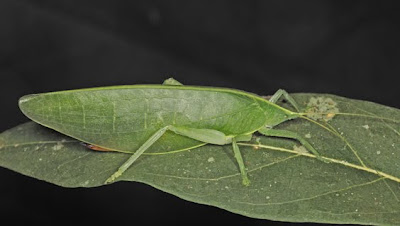 The chirping calls of this katydid can be heard most nights of the year when the nocturnal temperatures are warm-about 25C. This species is a leaf eater and exists with at least two others in the genus in the Kuranda rainforests. It is not know if the other species share the same biological characteristics. 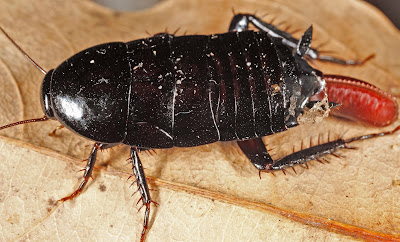 Cockroaches are the most diverse of the orthopteroid insects in the rainforest. At my place I have recorded over 90 species. This is almost unbelievable but the records prove it. They occur is all habitats from treetops to the soil and in decaying wood etc. This female is carrying an ootheca (egg case) which she will deposit in a crack in some decaying wood when it is ready. Records suggest that this cockroach occurs as an adult throughout the year. 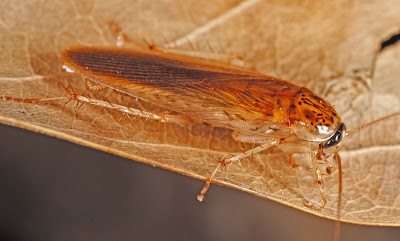 The ectobiines (formerly the family Blattellidae) are the most diverse group in terms of species in this rainforest. There are literally dozens and dozens of species. Most are nocturnal and graze on the fallout from the canopy on leaf surfaces after dark. During the day they hide in the leaf litter. There myriads of nymphs and adults of many species can be found. They are important decomposers.

This flattened cockroach spends the day under bark or in accumulations of twigs and debris in the forks or crotches of large trees. At night males frequently come to lights. Females are wingless and resemble little trilobites. Adults have been observed during the wet season and well into the dry (Jan-Aug.).

Mantids
It's quite unexpected to find any mantid during the winter (dry season). Adult 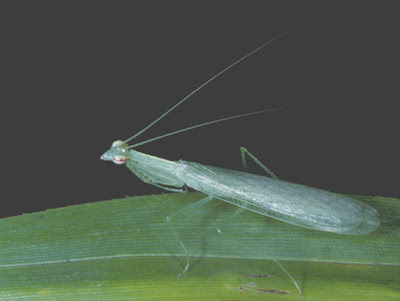 The most common mantid at lights in the Kuranda rainforest. This species has been recorded every month of the year and can be seen almost anytime a light sheet is in operation. It spends the daytime in the canopy sheltering on the undersides of leaves.

This little tree-running mantid has been recorded as an adult every month of the year.
Posted by Mr. Smiley at 17:19:00 2 comments: