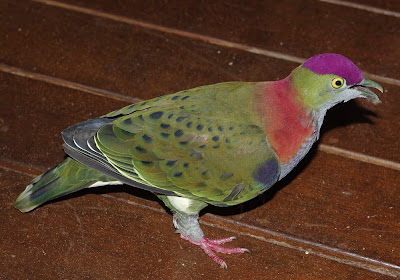 This Superb Fruit Dove literally dropped in. It hit the window and was stunned for a time and that allowed a photo or two. These birds are supposed to be common but are usually in tree tops or out of sight where they feed on a variety of fruits and palm nuts. The species extends north to Indonesia. 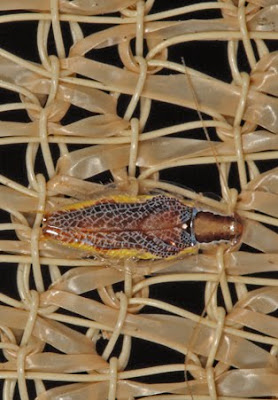 If you are into cockroaches, this would have to be a favourite. It is Mediastinia australica (Shelford). You can judge its size from the weave of the light sheet. It probably spends the day tightly embedded in the unfurling leaves of ginger or ginger-like plants. After dark it forays for food on leaf surfaces. 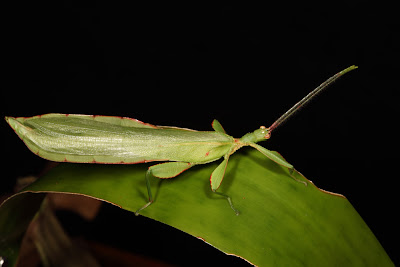 Monteith's Leaf Insect. Every year I see 2-3 of these wonderful insects. The Leaf Insects are related to Stick Insects. This is the only known Phyllium in Australia. There is a related leaf insect, Nanophyllium pygmaeum Redtenbacher, that lives in the vicinity of Iron Range north Queensland. Leaf insects are found broadly in the Old World tropics. They are kept as pets by members of the Phasmid Study Group where you can find all sorts of information on the care of stick insects in captivity.

Monteith's Leaf Insect is known only from males. The girls must be up there but only a photo of one taken in the Cairns Botanic Gardens is all we know of them. Leaf insects always have the tendency to move upwards. They seem to be at home in tree tops, so when one like this comes to the lights, it does not stay for long. Females of other species are often bulky and seem incapable of flight. So it is not surprising to not have seen one of this species. But it will happen some day; perhaps, during a storm or after a cyclone, one will happen along. This insect would make a great display in an insect zoo.
Posted by Mr. Smiley at 10:55:00 2 comments:

Fun at the Fruit

If you would like to have a different experience, place some well ripened fruit in your bird feeding tray and poke your head out after dark and see what's happening. In this wet, humid period, you'll be surprised at all the activity. You might find a mammal or two taking advantage, so be prepared. 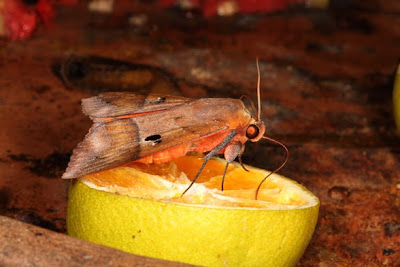 This is a catacoline noctuid. Quite a mouthful. Ted Edwards suggests it may be Thyas miniacea. I did not want to collect it as it seemed to be having such a wonderful time! Note the mouth, a feeding tube with the tip barbed. These moths can cause great damage to a fruit crop. it's not that they eat so much but that the barbed mouthpart pierces the skin of the fruit and allows destructive fungi to enter that reduces the fruit's marketability. 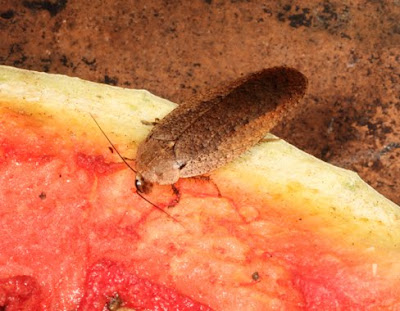 This is a common cockroach in the rainforest. It is a blaberid, a different family from the blattellids noted below. This species spends the day in the leaf litter and individuals found in early evening often have sand grains on their bodies. This indicates they do some burrowing. The numbers seen on vegetation and at the lights indicates it is a common species. The genus, Molytria, is in a taxonomic mess and it is impossible to place a species name on any of the species because their original descriptions are so vague and non-descriptive! 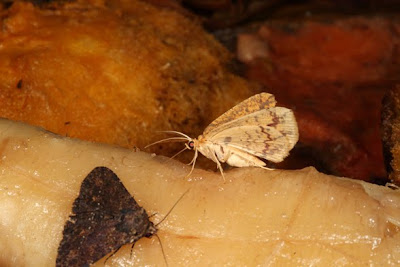 The lower moth is probably a noctuid, the other a geometrid, a representative of another large family. This one appears to be Borbacha euchrysa. For an elegant look at many of the moths of Kuranda, visit Kuranda Mothology. This site was designed by Kuranda artist and mothologist Buck Richardson who has an equally elegant book on the subject noted below. 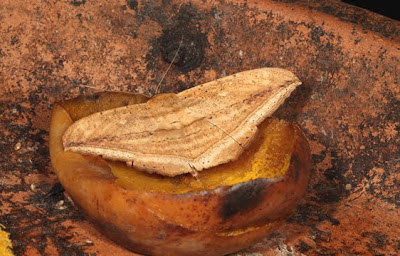 This elegant moth is Hulodes caranea. Many large fruit moths travel great distances and some can wind up in parts of the country where their species could not survive the winter. 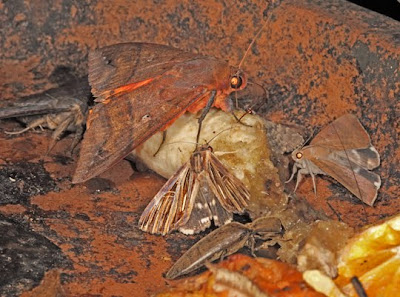 This is a happy group of frugivores. Most of the moths are noctuids. The striped on is Erchia ekeikei. The more you look, the more you will see. The beetle in the foreground is a click beetle, quite a different species from the one below. 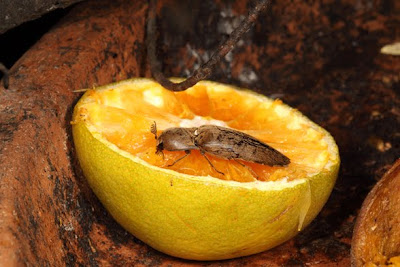 You can judge the size of this click relative to the orange. There are many species of click beetles in this rainforest ranging from a few millimeters in size to giants 40 mm or more. 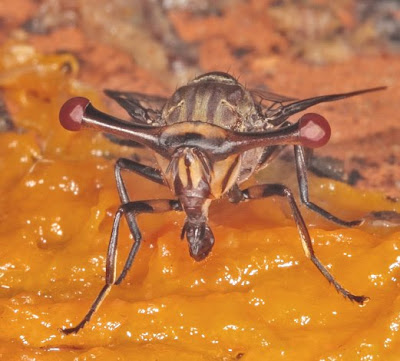 Any goils about? I know I've had a blog on stalk-eyed flies but they are so photogenic. Aside from having a good feed, this guy is looking for the opposite sex. 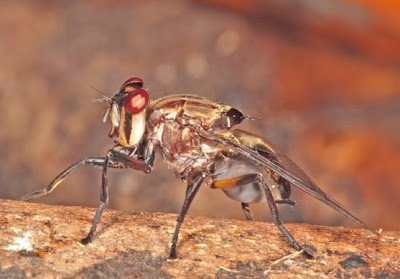 The object of his affections. Females select males with "great racks", but if the pickings are meagre, well he'll do. 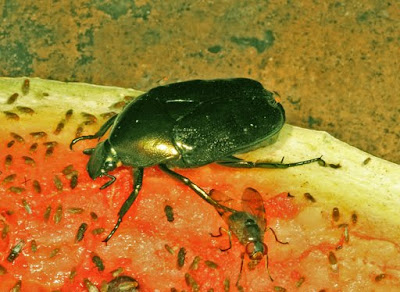 this nice scarab is often seen flying during the day. Note all the drosophila flies and their pupae as well as the fruit fly in the foreground. The take-home message here is that this bevy of fruit-feeding insects is reducing the fruit to detritus and returning it to the soil. This will nourish the rainforest plants and animals that rely on these larger insects to break down this resource. All part of the recycling process.
Reference
Richardson, B. 2008. Mothology: Discover the Magic. (Leapfrogoz, Kuranda Kreations, Kuranda, Queensland, Australia.) Pp. 1-66.
Posted by Mr. Smiley at 10:43:00 1 comment:

"Things are not always as they appear"

“Things are not always as they appear”. This was the admonition to DR from Mr James A. G. Rehn in the early 1960’s. Now what has dredged that up from memories long thought gone you say. Well my friend Jiva Sztraka, a local naturalist and computer expert, brought over the little katydid illustrated below stating that he hadn’t seen that species before. Well he probably has, but not in that form. 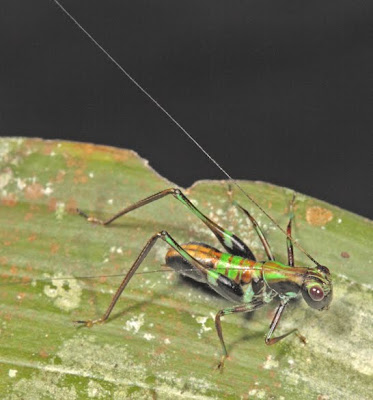 To get back to the original quote, Mr Rehn had been arguably the world’s leading orthopterist (a person who studies grasshoppers, katydids and their relatives) for over 50 years when he made the statement and admitted to a great error in judgement that he had hoped I would avoid.

Last October I presented a blog illustrating some foes of folks attempting to grow and flower orchids in a rainforest habitat Here is further evidence of the damage that some local, native cockroaches can o to orchid flowers.
As an entomologist with a fondness for cockroaches (I have identified some 70+ species on my rainforest block!) I was reluctant to accept that they could do significant damage to exotic orchids. How wrong was I! To reduce the damage to my plants from Red-legged Pademelons and Cassowaries, I suspend my orchids on the balcony of the verandah using barbed wire. This is some 7-10 m from the ground. [Why barbed wire? Well it spaces the plants nicely and prevents the hangers from moving towards other plants. But be careful; barbed wire hangers in the wrong place can be a hazard to humans and wildlife.]
But I digress. I have a number of Stanhopea orchids. These are large plants that flower from beneath. That is they are potted in baskets and the flower spike emerge either laterally or from beneath the basket. So it is not practical to bring the plants into the house when they are flowering. So they are at the mercy of the ambient fauna. Examination of the flowers at night provided some distressing observations. 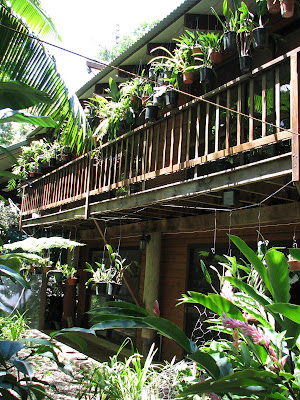 A portion of the balcony where the orchids are kept. 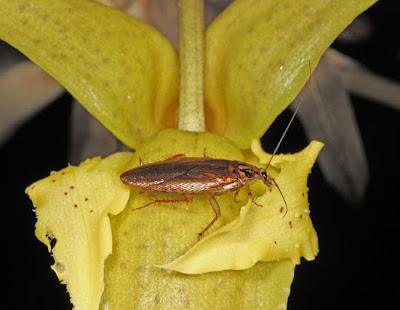 The evidence! This is a blattellid cockroach in the genus Beybienkoa. It is an undescribed species and not uncommon around our forest. It can be seen eating the petals of the Stanhopea wardii.

At the same time, an equally destructive character, a katydid named Austrosalomona sp. 10, was doing its share to reduce the orchid display to shreds. The katydid is much larger than the cockroach so it would consume much more. But there is the numbers game to consider. I collected more than 60 specimens of the cockroach but only found 3 of the katydid.

I might be partially responsible for the orchid carnage because just a few metres away from the flowering plants is the bird-feeding tray. It had the remnants of the day's offerings which consisted of mango seeds, orange halves and banana. This is absolutely irresistible to any self-respecting cockroach passing by. So I was not too surprised to find a number of species feeding on the fruit. What was a surprise was to find them eating orchid flowers. 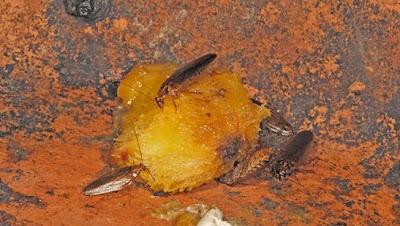 Here we find two species of closely related cockroaches feeding on the fruit at the bird feeder. Beybienkoa sp. 1 is much larger than its close relative Carbrunneria paramaxi (Roth) seen here feeding with it.

As an aside, I might say that cockroaches are fairly easy to identify. They have many characters that can be used in identification. The most useful and often definitive are features of the male and female genitalia. But the colour patterns of the pronotum, banding of the legs, pattern and spotting of the face and size are all very useful in separating species. 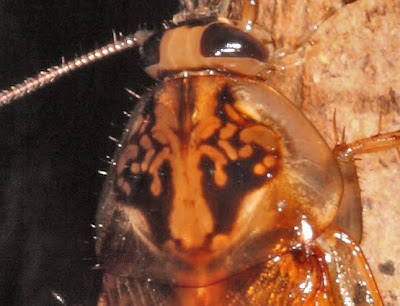 The pronotum of many cockroach species is species-distinctive relative to pattern, spotting etc.

This is another blattellid species, Neotemnopteryx sp. It is one of four species in the genus that we have here on the property. This one is a female and I cannot associate it with a species name. Females in this genus are almost identical to one another. Hopefully, the males can recognise them better than I can!

It should be noted that of the 60+ individuals of the Beybienkoa species found on the fruit and orchid, only 3 were males. The reason for this may be that females are constantly producing eggs and require more food than the males to nurture this process. All of the individuals of the other species were females as well. However, there was one male of the Austrosalomona katydid feeding on the orchid. 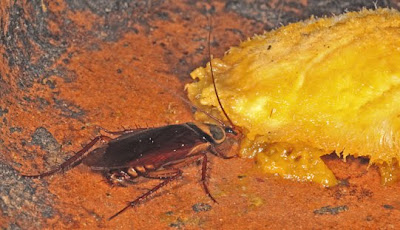 The Australasian Cockroach, Periplaneta australasiae, is an unwanted visitor. This species is a cosmopolitan pest and I have not found it far from the house. It should be controlled wherever it occurs. Unlike the native species, this one gets into the house and can live there if conditions are right. It can transmit a variety of diseases and maladies because it runs over garbage and sewage as well as food and in so doing moves disease organisms with it. Fortunately, the majority of native cockroaches cannot survive for long in the house. They are much more attuned to outside conditions and the general dry atmosphere of the home combined with foods they do not eat, contributes to their demise in domestic situations. But the Australasian Cockroach it is different. These cockroaches should be eliminated from homes, hospitals restaurants and the like.
If you would like to learn more about cockroach ecology, behavior and natural history, there is a recent book that will answer most questions. See below.
Reference
Bell, W. J., Roth, L. M., Nalepa, C. 2007. Cockroaches, Ecology, Behavior, and Natural History. Pp. 1-230. Johns Hopkins University Press, Baltimore, Maryland.
Posted by Mr. Smiley at 11:22:00 2 comments: