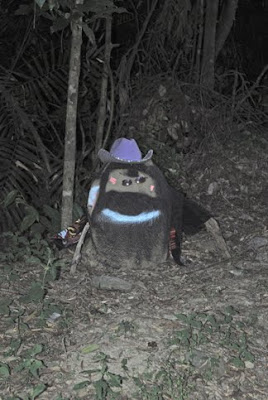 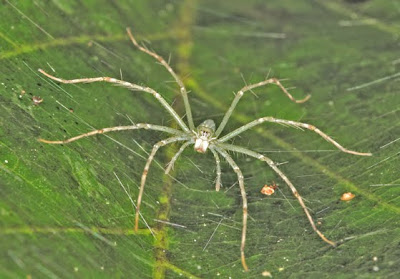 This green spider, Hygropoda dolomedes, is common on leaf surfaces along the margin of the rainforest. It produces flat, matt-like webs on the surfaces of leaves of many plants, both native and introduced. Thanks to Margaret Humphprey for the identification. It is a member of the family Pisauridae, a family related to Wolf Spiders. 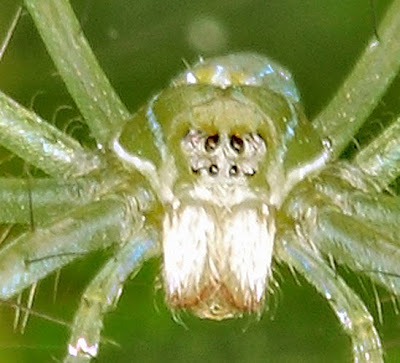 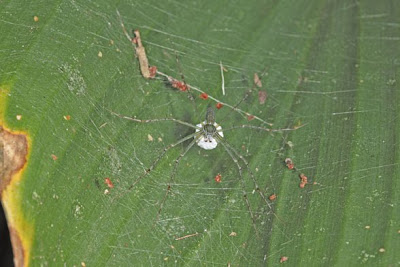 At the end of the wet season (April) females can be found guarding egg masses.
Posted by Mr. Smiley at 10:57:00 No comments: 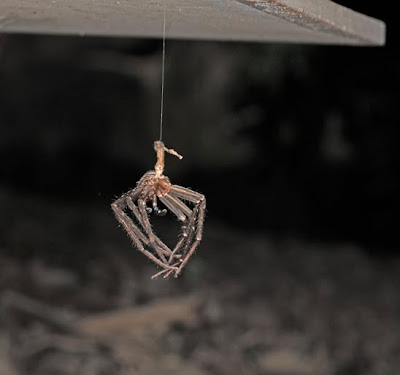 What's This? Spiders hanging themselves? No, not at all. We see these dangling from shrubbery, under tables, hoe handles in sheds and the like. These are the cast skins of moulting Huntsman (or if you want to be politically correct, Huntspersons) spiders. Spiders moult many times on their way to adulthood and many species continue to moult after becoming adult. Young spiders increase in size following each moult. In the case of adults and moulting, this is done to replace lost hairs and worn integument.
The spider selects and appropriate spot in the evening and drops a bit of webbing. It performs this necessary part of maturation in the evening because it is less likely that predators will see the dangling spider and the humidity is relatively higher affording some ease in getting out of the old skin. Then the transformation takes place at the end of the web. The entire exosklelton is shed over a period of s few hours. Then the spider crawls up the web, waits a bit and by the time morning rolls around, it is nearly ready to resume life. It spends the day undergoing changes that hardens up its integument and by evening it is ready to resume hunting. The process is initiated by hormones and moultng fluid helps to create a gap between the old skin and the new one that is forming beneath. This fluid is reabsorbed after moulting. 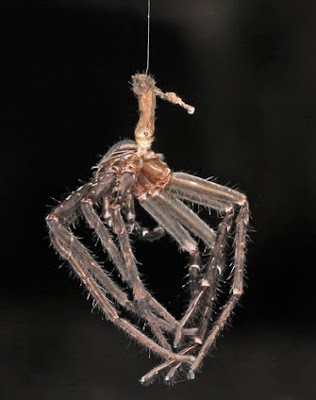 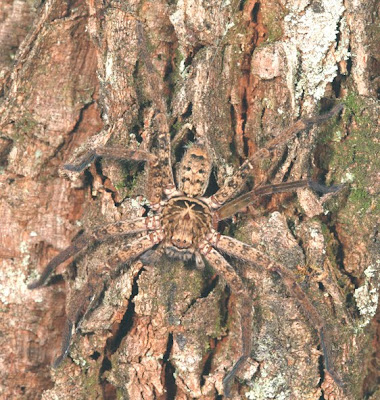 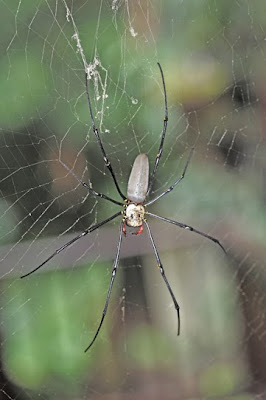 The other day I was tending to my orchids and almost ran head-long into this creature. It's a Golden Orb Weaver, Nephila maculata. We have dealt with this species before in the early days of this blog, but this one was very photogenic and it will be interesting to monitor its progress. That will all depend on its not being discovered by the local Pied Butcherbird which seems to seek these morsels out at the end of the wet season. [Our local resident butcherbird was found dead on the road 2 days ago and I really miss his companionship in the early morning when I check my light sheet.] Golden orb Weavers occur in many places. Check this site to see the variety of body shapes and sizes.
This is a big spider. It measurers 19 cm from the tip of the foreleg to the tip of the hind leg. That's 7.5 inches for you northeners. The web is 1.2 m in diameter. These spiders have been recorded catching small birds, lizards and frogs. Their name comes from colour of the orb--the web. In the sunlight it has a distinctly golden or greenish appearance. It is remarkably strong; you can rest your arm along the top line without breaking the web. 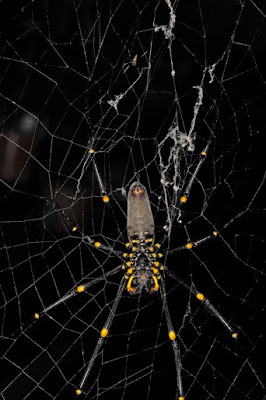 Ventral view. Can you spot the male? It's the tiny fleck at the top in the 12 o'clock position. 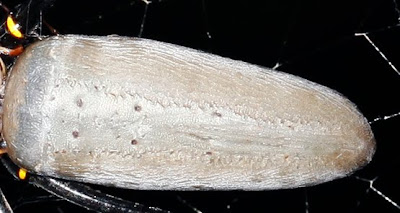 This is the dorsal view of the abdomen. The holes are probably for breathing purposes. Note the surface covered in minute hairs. 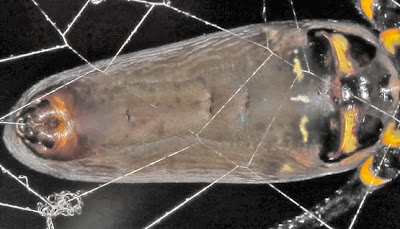 This is the ventral surface of the abdomen showing a few more openings for the book lungs. Note the pattern. To the left are the spinnerets. Check this link to see how they are used. 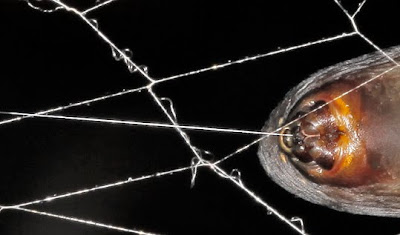 The spinnerets have produced a strand of silk even though she is stationary. She has a "lifeline" that keeps her in contact with her web should any catastrophe strike. 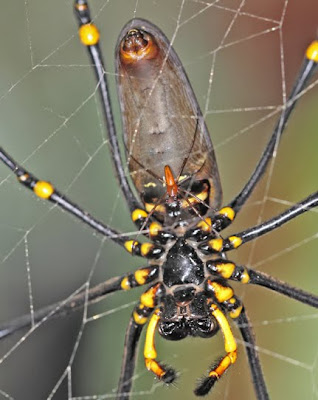 With this view of the spider you can plainly see the male of the species. He lives in fear of his life and only to mate. This he must do with great caution as with one false move, she might eat him. 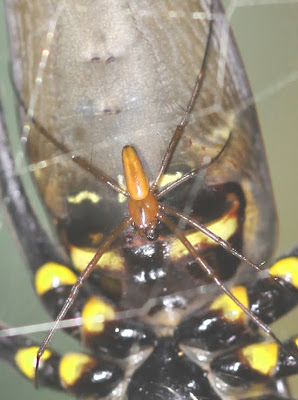 This male has met with some misfortune. Note that one leg is missing and it appears that he is missing one of his pedipalps. These are the modified legs that serve as intromittent organs. He must carefully position one of these legs into the genital opening of the female in order for there to be a successful mating. If she is not in the mood, she will either flick him away or eat him! Simple! I'll keep you informed of his success and the fate of this spider.

Additional Note
My friend Graham Milledge of the Australian Museum, Sydney has pointed out that in 2007 a paper was published by Harvey et al. (2007) on the Australasian Nephila spiders. The species under consideration above is now known as N. pilipes (Fabricius) 1781. This is an extremely old name dating back to the early days of binomial nomenclature. N. maculata Fabricius 1793 is now considered a synonym, that is, it is believed to be the same species and the older name is the one we should now use.

This species has a broad distribution as can be seen from their distribution map. Thanks to Graham for the info. 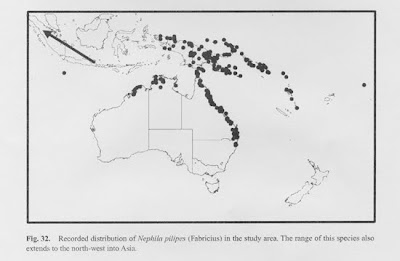 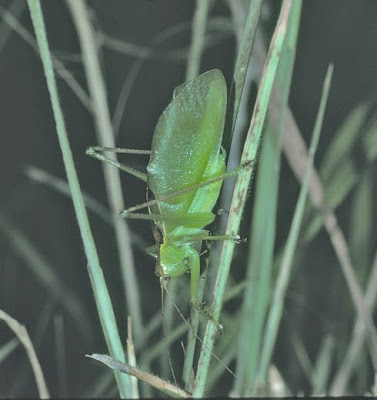 My friend Jack mentions each year the song of the Mundurra Balloon-winged Katydid, Hexacentrus mundurra Rentz, signals the end of the "beetle season" and the onset of the autumn period. This is true. But this year he notes that their raucous calls are not as prominent as usual. There may be ac couple of linked explanations for this. The continual wet period, which has been for more than 30 days now, may have promoted fungi which have reduced the populations. They are still around. You can hear them on warm humid nights.
These katydids are quite remarkable. While not true rainforest katydids, they occupy the rank grasses that grow along rainforest margins. Males sing by rubbing the forewings together. The sound if this species is so loud it can be heard from a moving vehicle with the windows down. It is a widespread species found across tropical Australia in woodland habitats. It lives close to the ground in dense grasses where it feeds on other insects--katydids a specialty. Neither sex can fly very well. Males glide a bit and females are generally flightless. What was interesting to me, and still is, is that this common, widespread and noisy insects had not been described until I named it in my monograph (Rentz, 2001). Maybe this is just an example of our state of knowledge of the Australian fauna, some 25% of which is named and the rest is, well left to the ages. And at the rate the habitat is changing and the direction of organizations like CSIRO are taking, it seems unlikely Australians will be describing these species anytime soon. It will probably be left to the Chinese to document our fauna!
Reference
Rentz, D. C. F. 2001. The Tettigoniidae of Australia. Volume 3. The Listroscelidinae, Tympanophorinae, Meconematinae and Mictotettigoniinae. CSIRO Publishing, Collingwood, Vic. 524 pp. 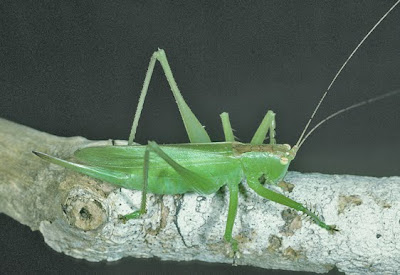 Female have an elongate ovipositor that they use to insert eggs into the ground in grassy areas. The following year the eggs hatch and the nymphs (hatchlings) are in just the right spot to take advantage of the small insects that live amongst developing grasses. Females are "dimorphic" for wing length. That is some individuals, like the one above, are fully capable of flight. Others are so short-winged that they can only glide.
This species is capable of delivering a very painful bite!
Posted by Mr. Smiley at 17:01:00 No comments: 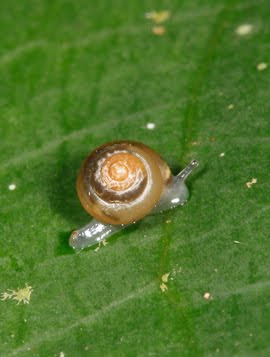 Most people probably don't think much about scavengers. But the rainforest is full of them. They are working all the time as the "clean-up team.
Here we see the tiny snail referred to by Alan Gillanders in his blog on the Fungus Beetles. These little snails come out in wet weather and graze on the surface of big leaves--at least that's where I see them. They are only a couple of millimetres in length. To discover their precise food would require some observation and, perhaps, a bit of dissection. 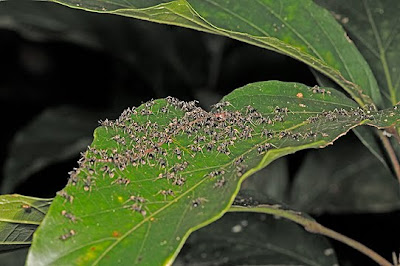 At the same time I noticed a group of ants gathered on the surface of a leaf. They were dismembering an earthworm. This worm was on a leaf about 1.5 m from the ground. How did it get there? Well the simplest explanation is that it must have been dropped by some other creature--a bird or lizard. I doubt that the ants had dragged it there. A less plausible explanation is that it fell from on high. I have found earthworms in epiphytes well off the ground but there were no suitable candidates for this scenario.
Posted by Mr. Smiley at 16:43:00 1 comment: 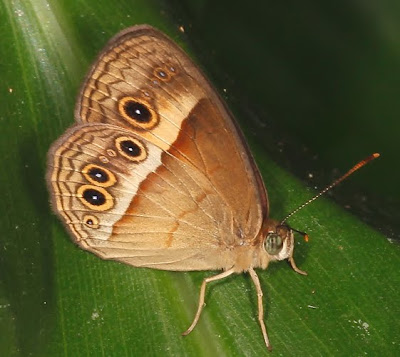 What! Four-footed Butterflies? Well yes this is the case with the family Nymphalidae, one of the largest butterfly families with over 5,000 species. The adults in the family have atrophied front legs that are useless in normal ambulatory activities. They are tucked up alongside the head and the butterflies only use four of their legs for walking.
This little Orange Bush-brown, Mycalesis terminus (Fabricius), is a frequent visitor in the garden but has been unable to get about for the past few weeks due to the wet weather. At the slightest hint of a bit of sun, they appear from nowhere!
Posted by Mr. Smiley at 16:35:00 No comments: