The End of the Beginning

Each year around time, it is time for the male cassowary to desert his offspring. 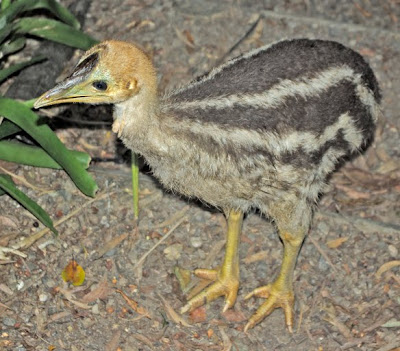 Ever since the birth of his three chicks in late October the male has looked after the chicks, protecting them and initiating them into the rainforest world. If he has done his job properly, he has taught them where and what to eat and where to find it. Now in mid June the female is often in the presence of the male and this suggests that the mating season will be soon upon them and then nesting will occur.
But before that, last year's teeners must be dispensed with. Where days earlier, the male allowed the bubs to crawl all over him and seek refuge under his bulk at night, all of this suddenly changes. 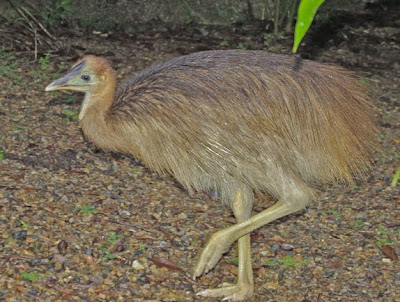 One of three "teenage" Cassowaries
The male drives the bubs away like a mother hen with her clutch when it is time to send them on their way. He is quite insistent chasing the chicks off into the bush.
The bubs just stand there looking and crying their intense distress call. But to no avail. the male does not come to their rescue. This screaming continues for some days. It is a common sound in the rainforest this time of year.
But things can become worse. The male will drive the young teeners well out of his territory, using a great deal of force and bluff if necessary.
The bubs are most vulnerable at this time. They must be able to find food in the midst of the dry season which is the most stressful time of the year. They must also avoid dogs, dingos, pigs and vehicles. A big ask for young callow birds. But the most successful will survive.
It has been our experience that once the male drives away the bubs, after a short period of time, we never see the juveniles again. They just move away and establish their own territory. They eventually lose the ability to produce the distress call and live in a mostly silent, solitary world.

Over the course of the year we find a number of insects at the lights that really are out of place in the rainforest. Broughton's Snout-nosed Katydid, Euconocephalus broughtoni Bailey, is one such insect. This katydid lives in grassy verges. it is most commonly found along roadsides. Every so often one or more show up at the light indicating that this katydid does some high altitude flying at night. (This is similar in some respects to the behaviour of the Pygmy Grasshopper mentioned in a previous blog.) For a katydid, this species is rather robust and you would think it incapable of long flights.
This is an uncommon katydid. It is a member of the tribe Copiphorini of the large and varied tettigoniid subfamily Conocephalinae. Other members of this tribe are more common. Several species of Pseudorhynchus are more commonly encountered in similar ecological situations. 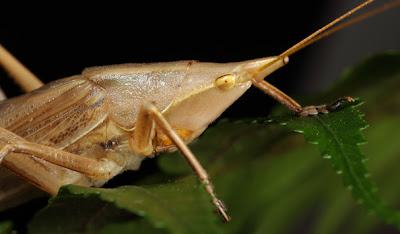 The slant-face of this and most other copiphorines seems adapted for two activities. Feeding is one and the other may have to do with escape strategy, at least in some of these grass-feeders.
When threatened, they dive deep into the grasses and stick their heads in the substrate. The protruding part of the katydid resembles a blade of grass or a dead stem. They remain motionless in this position until the danger passes. 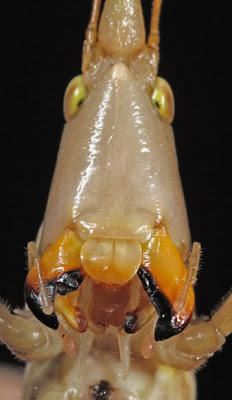 The mandibles are formidable and the katydid can deliver a painful bite that draws blood suggesting it must be a carnivore. But it is not. The head is full of powerful muscles that are used in cracking the tough seed coats of the grasses the katydid eats.
Note that the mandibles are not bilaterally symmetrical. The seed is probably positioned on one side and then cracked on the other. Also note that the maxillary palps are positioned just in front of the mandibles. These structures contain many sensory hairs that relay the message to bite.
Also note the pair prongs between the first pair of legs. These are often present in katydids and can vary in length and width depending upon the species. Their function is not known.

The reason for this blog is to present the Calling song of this katydid. It is similar to the songs of many Pseudorhynchus species but quite different. 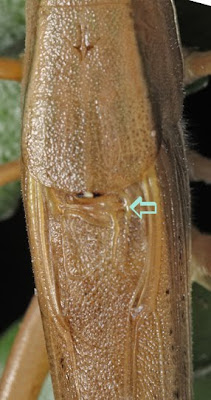 The sound is produced by stridulation. On the underside of the left forewing, where the arrow points, is a file. It resembles the teeth of a comb. Through rapid back and forth movements of the wings, the file moves over a modified vein on the right wing, and the sound is produced. The structure of the wing is of the utmost importance in producing the right sound. Females are attracted only to males that they recognise. In this group, only males produce sound.
Posted by Mr. Smiley at 14:57:00 4 comments: 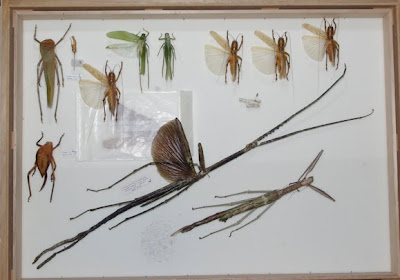 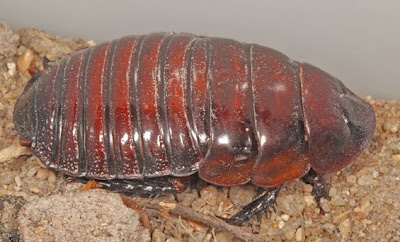 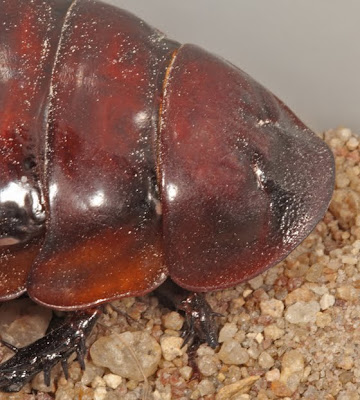 The "rhinoceros" part of the name of this insects is appropriate. It uses the scoop-like portion of the thorax to dig in sandy soils. The stout, spiny legs are very strong and well suited to digging. Beneath the thorax are a pair of eyes and short antennae. A remarkable insect. (As a cockroach it is a great ambassador- it is clean, disease free and does not produce any disagreeable odours.)
Posted by Mr. Smiley at 12:48:00 15 comments: