The Eyes Have It

Tis the season! With onset of warm spring weather March Flies (in America Horse Flies) make their annual pesty appearance. Fortunately, their season is short but while they are on the move, they can be very annoying--especially if you are a kangaroo or wallaby. They are active by day. If you have ever thought of travelling by car throughout Alaska, you will experience these flies (and Blackflies) like never before). Australian Tabanidae comprise about 100 or more species.
The larvae of these flies breed in wet soil, along streams, in beach sand and in tree holes and the like. With the exceptional wet season and its augmentation by spring rains, it has set the stage for an exceptional year for March Flies.
This is a well studied group of flies because of their medical and veterinary importance. Livestock can be driven frantic by attacks of the flies. Most species suck blood but there are a few, as with mosquitoes, that feed on flowers. And as with mosquitoes, if you are bitten, you are bitten by the "weaker" sex. No human diseases have been transmitted by March Flies in Australia but "loaiasis" of humans (loa loa) occurs in Africa and trypanosome infections of stock is common in certain Old World countries. Anthrax can be transmitted by March Flies. Within Australia, disease transmission of a filaroid nematode is known in kangaroos and wallabies. Humans do not seem to be affected by this. 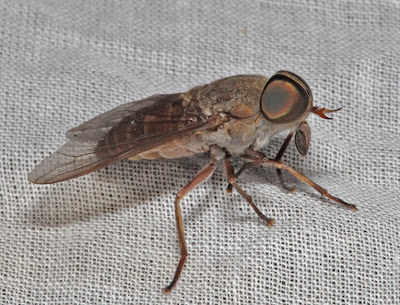 A female March Fly (Tabanidae). There is a "bridge" between the eyes of females that identifies them along with the developed mouthparts. The protruding portion, the labellum, serves as sponge to lap up the blood as it accumulates form the wound. 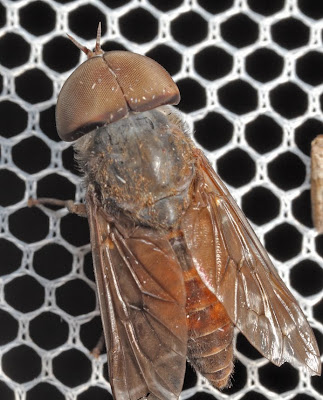 A male March Fly. Note that each compound eye touches the other.
March Flies seem to find their prey by sight. They are active by day but males are often found buzzing around lights. This suggests they are on the move searching for females after dark. 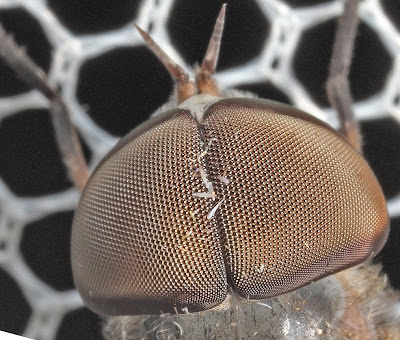 The compound eye consists of hundreds of facets that convey a mosaic image to the fly.
The head comprises a pair of compound eyes. Females have large numbers of facets to their eyes; males do as well but they need them to find females, not potential hosts. Females need a blood meal in order to produce a successful clutch of eggs. 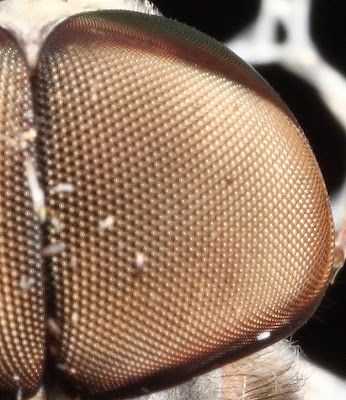 A close look at one of the eyes reveals it is a myriad of individual facets.
Posted by Mr. Smiley at 17:18:00 No comments:

A clique of Clicks

Everyone is familiar with click Beetles. They seem to occur everywhere. Wherever a light is burning in the temperate and tropical world you can expect to see a Click Beetle of some description. Several dozen species occur in the north Queensland rainforests. They range in size from a few millimetres to 45 mm or so. They are mostly dull-coloured but there are notable exceptions like Paracalais clicks that have a camouflage pattern similar to the pattern lichens present on rainforest trees.
The body shape is characteristic and the angles of the thorax are produced. Ventrally there is a spine-like process that fits into a groove. This causes the "click" that allows the beetles to flip when it is disturbed or when they inadvertently fall on their backs. The body integument is very tough and you frequently see birds attempting to "crack" larger beetles, usually with little success.
Click beetle larvae live in the soil and are often called Wireworms. Several species are economically important because of their depredations to roots of crops like wheat and other grasses. Adult clicks live in foliage; some are predaceous, others feed on plant material.
it is estimated there are 70 genera in Australia with 667 described species. Andrew Calder has produced a monograph on the Australian fauna. 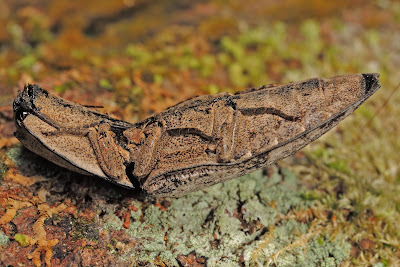 A Click Beetle, Paracalais sp. in a typical position-on its back.

The same beetle right-side up. 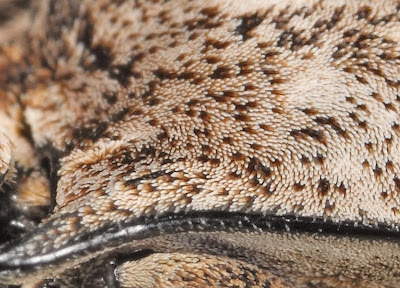 A close look at the colour pattern revels that it comprises modified hairs or scales. 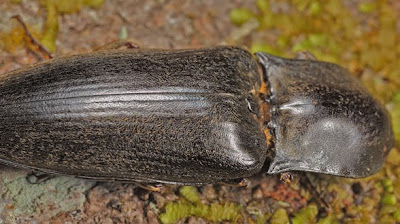 A large specimen of Lanelator sp. Note the sharp angles of the thorax, a characteristic of the Elateridae.
Reference
Calder, A. E. 1996. Click Beetles Genera of the Australian Elateridae (Coleoptera). Monographs on invertebrate Taxonomy, Vol. 2. CSIRO Publishing, Collingwood, Vic.
Posted by Mr. Smiley at 12:13:00 1 comment:

Beetles on the Move

It's that time of year again. There are many beetles at the lights each night. The Long-horns (family Cerambycidae) are among the most spectacular because many are large and some quite colourful. They range in size from some minute species a half centimetre long to some real giants 70 mm or more in length. The larvae live in and feed on wood, mostly decaying wood. There are some species that do inhabit living trees and shrubs and feed on living tissue. Some Long-horns are pests of the timber industry. The adults of many species are commonly found on flowers where they feed on pollen and the floral parts themselves. They are effective pollinators. For the most part, Long-horned beetles are part of the recycling process-turning dead wood back into soil. 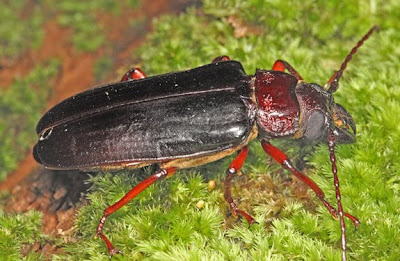 This beetle is Archetypus frenchi (family Cerambycidae; subfamily Prioninae). It measures around 50 mm and is rather formidable. 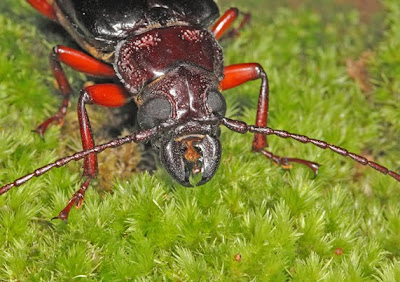 These jaws are not for predation but for chewing into wood for egg laying and for defense. Such large beetles are a potential food source for many reptiles, amphibians, birds and mammals. 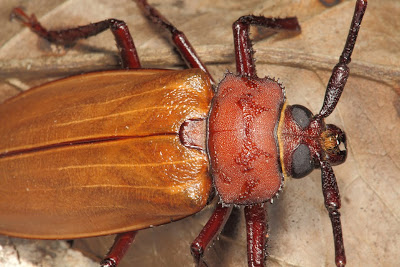 This is another prionine cerambycid. It is even larger than Archetypus. Curiously with their great size, appearance and appeal as specimens for a collection, Australian prionines are in need of revisionary studies. About 1200 Australian species have been described but there are many undescribed species waiting in line for taxonomists to name them. 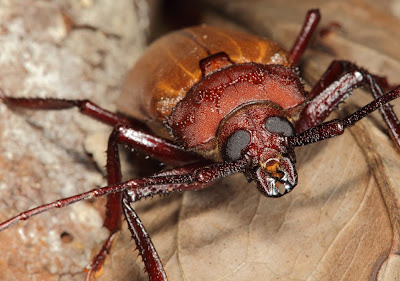 Many cerambycids can deliver a painful bite. They have very good eyesight and use it effectively.

Thanks to Jack Hasenpusch for the identification of Archetypus.
Posted by Mr. Smiley at 09:07:00 4 comments:

Anyone familiar with this blog will note a lengthy hiatus between the last offering and now. We were in the USA for almost 2 months visiting relatives and friends and attending the Ig-Nobel ceremonies. DR and Darryl Gwynne were awarded this year's prize in Biology for an observation made in Western Australia in the early 1980's. But more on this later.
Recent rains of around 300 mm have brought out the spring insects in quantity. It was nice to be greeted on the first night by Ozphyllum kuranda Rentz, Su and Ueshima. 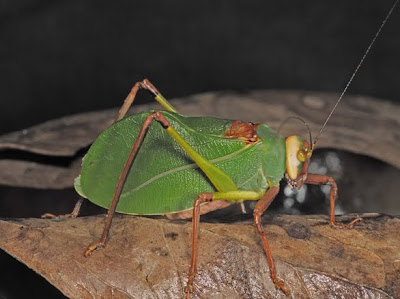 O. kuranda is an occupant of understorey vegetation. Like many rainforest species, it can be common at times and then seemingly disappear for several years. There are two known species in the genus, this one from coastal forests from Mackay to Kuranda and another, O. naskreckii from similar habitats in northern New South Wales and southern Queensland to just north of Brisbane. Both species are plant feeders and males produce a very loud zip-like call that even this old bloke can hear. 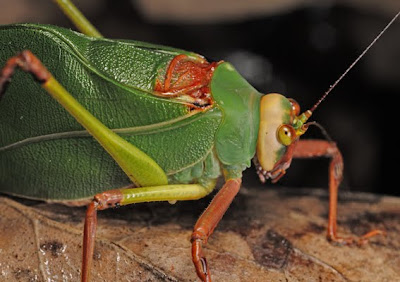 Ozphyllum katydids are very soft-bodied and rather sluggish in their behaviour, relying more on camouflage to avoid detection. The short, round wings suggest that they cannot fly much, if at all. Gliding or short flights are probably about the best these katydids can manage. The disk-like eggs are probably laid in cracks in bark but no observations have been made.
The closest known relative of Ozphyllum is probably Cosmophyllum, a genus known from Chile. This suggests that these katydids are remnants of a time long ago when the southern continents were conjoined.
Literature
Rentz, D. C. F., Su, Y. N., Ueshima, N. 2007. Studies in Australian Tettigoniidae: Ozphyllum, a new genus of Phaneropterine katydids with comments on its relationships and ecology (Orthoptera: Tettigoniidae; Phaneropterinae). Zootaxa 1629 57-68. (pdf's available)
Posted by Mr. Smiley at 13:27:00 3 comments: