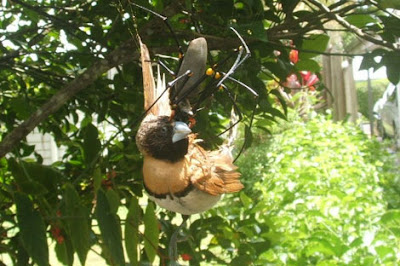 In late October the Cairns Post Newspaper published an article and photos of a rather astounding natural occurrence. Mr Les Martin of Atherton (not far from Cairns) photographed the Golden Orb Weaver, Nephila sp., with a bird it had captured in its web.

For the uninitiated, the Golden Orb-weaver is a very large spider. It’s web often measures ¾ of a metre across. Females perch in the centre of the web on-guard for any catches. The web is notable on two accounts. It is a golden colour when see in the sun- hence the name. But is it extraordinarily strong. You can rest your arm across the top of the web without damaging it. The occupants, of course, are unimpressed with this activity! Golden Orb-weavers always attract interest. I have always been surprised at the reaction of the public when one appears in the garden. They are always greeted as long-lost guests and left to their own devices. Other spiders are either ignored or sprayed out of existence. It might be that these spiders appear suddenly and then, for some reason, they just don’t show up again, sometimes for years.

Golden Orb-weavers have an elaborate life history. The giant females are always accompanied by the minute males. These males take their life in their hands (or legs!) and live at the outer reaches of the web and wait patiently for their “15 minutes of glory” either before which or shortly afterwards they are consumed by the female. Other spiders such as de-drop spiders and pirate spiders also live commensally and feed on smaller insects that Mrs Orb-weaver ignores or has missed. But occasionally they themselves wind up as the meal!

But I digress. A bird-eating spider! Yes, and this is not the first incident. Barbara York Main (1976) notes the wrens and silvereyes can meet their fate in the webs of the Golden Orb-weaver. But because of the habit of the spider of sitting in the centre of the web, the spider often meets its fate at the hands of a hungry bird. This seems especially true late in the season up here (May) when the Black Butcher Birds seem to seek out Golden Orb Weavers where they had ignored them for weeks and weeks prior to this time.

The bird appears to be the Chestnut-breasted Minnikin, a fairly common finch in the northern tropics. 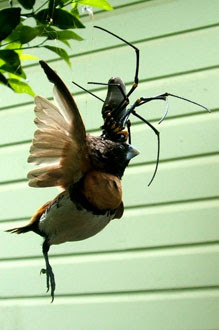