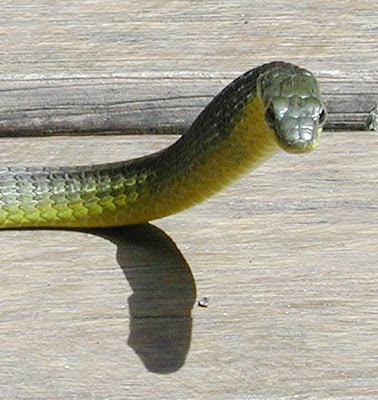 
I’ve been waiting for that spectacular snake shot to introduce the snake fauna of our rainforest, but nothing very spectacular has happened around here. Large pythons make the news around Cairns with their forays into gardens where they consume the family cat or take the odd dog. There was one story a year or so ago where a Cairns resident noticed that his ceiling was starting to bow downwards. It was getting worse each day. He eventually called a roofer who had a look. A large Australian Scrub Python was discovered and removed but then they discovered the real culprit-an even larger python. The smaller one was a male, the larger a female. The fellow had no rat problems but was happy to have the snakes removed.

That same species occurs here and I have seen a couple of individuals that were in excess of 17 ft. A“28 footer” was seen many decades ago. The main food of these larger individuals, that can be many decades old, is wallabies. At the caravan park there are “wallaby runways” through the dense fern ground cover and I have seen python(s) (maybe the same individual) from time to time lurking around these wallaby highways. The young snakes will eat bandicoots and rats and even birds if they can catch them. I would expect the odd small cassowary to be grabbed if encountered. They are frequent visitors in chicken coops and if you keep chickens up here, you must secure them at night of they’ll disappear.

There are no real snake problems in Kuranda. The commonest poisonous snake is the Red-bellied Black Snake. It is usually found along streams and is not especially aggressive unless stepped on or startled. There are no Taipans or Death Adders in the rainforest but just a few kilometres beyond they can be found and are frequently seen. No one has been bitten in the Kuranda area in the 7 years we have been here. Road travel is much more dangerous than being bitten by a snake.

I am indebted to Michael Cermak for providing the snake photos as indicated. Others are mine. Michael has a relevant book awaiting publication by CSIRO 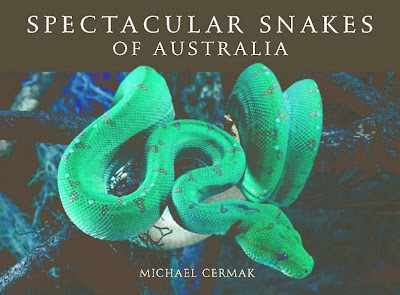 These are the most spectacular snakes in our area because of their size. Australian Scrub Pythons are the most common with Carpet Snakes and Water Pythons following in that order. They are mostly nocturnal but can be seen sunning at times.

The Australian Scrub Python, the largest of the snakes around Kuranda. 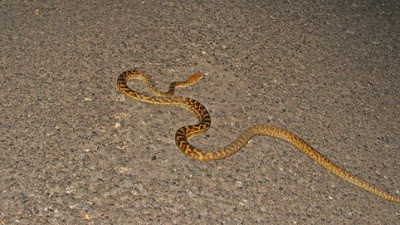 It is not unusual to find an Australian Scrub Python on your lawn after dark.

The Australian Scrub Python (Morelia kinghorni) is a wide-ranging species occurring from Indonesia and New Guinea to north-eastern Australia. 5m specimens are not uncommon and reports of 8m specimens are unconfirmed. It is a forest species and is especially common in rainforests where it feeds on mammals as large and wallabies and tree kangaroos. They are fond of crossing roads at night and most drivers avoid them (personal observations) and only a few are seen as road kills. 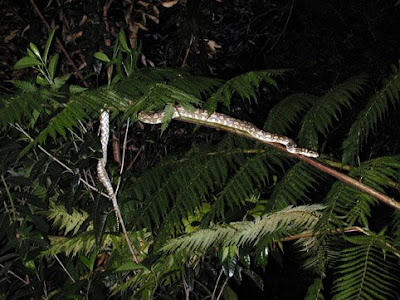 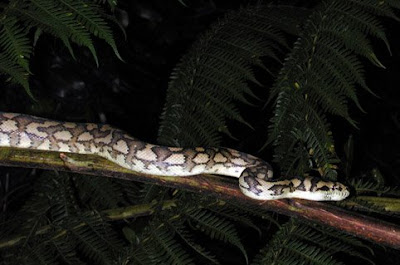 Even large Carpet Pythons are at home in trees.

The Carpet Python (Morelia spilota) is a smaller species (to 3.6 m) that has variable patterns, some based on geography. It is found around Australia except in Tasmania. They feed on small mammals, birds and lizards. They are said to be feisty. This individual was heading for our roof and would not be dissuaded from entering. I’ve seen it disappear under the shingles at least twice. We have no rodent problem in the roof! Hopefully it can find its way out. It is a common resident in Brisbane roofs. 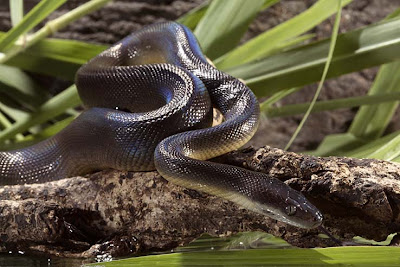 The Water Python (Liasis mackloti) occurs around water. A related species is known from Indonesia and New Guinea. I have seen them along our creek. This snake feeds on what it can catch. This includes small mammals, and water fowl. Crocodiles have been recorded as prey. Unfortunately, this snake is often confused with the deadly Taipan in other parts of Australia and is killed because of it. It is gentle and is often the snake the public is allowed to handle at reptile farms.

Colubrids are not well represented in Australia. The most famous (or infamous depending on how you look at it) is the Brown Tree Snake or Night Tiger (Boiga irregularis). This snake is a feisty character that roams woodlands at night in search of birds and small mammals. Cage birds are a specialty. If you leave your bird-cage hanging outside at night, the Brown Tree Snake will eventually eat the bird. If startled this snake will coil and strike. Large specimens are 2m in length. It is rear-fanged and not considered dangerous. On a night visit to my light sheet something got stuck in the front door as I was closing it. It was small Brown Tree Snake that had been travelling close to the house. It was not happy having its tail caught and let me know about it. I’ve never seen it again. 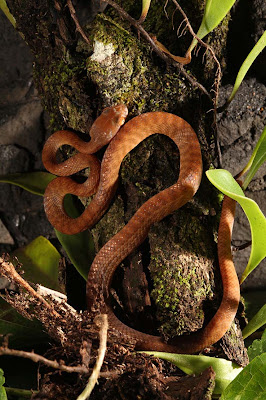 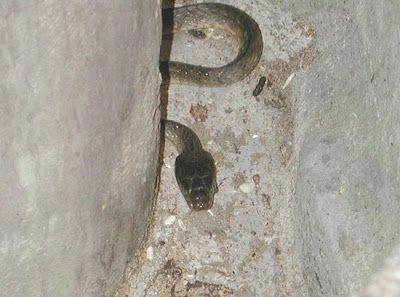 This fellow was lurking at the base of our house.

The Brown Tree Snake was introduced into Guam after WW II in shipping containers where it has virtually eliminated all the small birds and many other vertebrates. It has been involved with many power outages. Here in Kuranda it is often referred to as the “Oh, shit snake”. The reason is simple enough. When folks open their power boxes for a check, they frequently find a cranky BTS residing there. Thus the exclamation! The snake is much more common on Guam and children are often bitten. With the hissing and the violent displays in the snake’s behaviour, it is most traumatic for young children. As with many invasive species, without proper enemies and under favourable conditions, their size is larger than in their natural haunts in Guam and the Pacific Islands. The BTS in Guam has spelled disaster for the local biota. 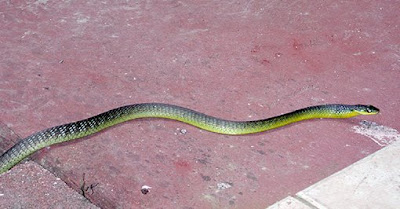 A Green Tree Snake in the driveway during the day.

The Green Tree Snake or Common Tree Snake (Dendralaphis punctulata) is a diurnal snake with a nervous disposition. These snakes are also curious. This one followed me around and tried to get in through the glass door. A friend had a similar experience in her garden in Cairns with the snake actually causing her to go indoors. These snakes feed on skinks and frogs and are equally at home on the ground or in trees. Larger snakes are about 1.2 m in length. They are usually beautiful with yellow throats. There are different colour morphs depending on geography. When first captured, they emit a foul odour. 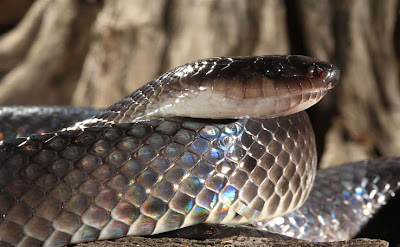 The Slaty-Grey Snake (Stegonotus cucullatus) occurs from SE Asia to New Guinea and northern Australia. It is a fairly large snake with some specimens 1.3 m in length. It is nocturnal and feeds on mammals, reptiles and their eggs. It is considered harmless, though puts on a show when cornered. The real problem is mistaking a more venomous snake for this one. A small Small-eyed Snake on a rainy night could easily be mistaken for this species by a casual observer. Best to leave alone.

TAIPANS, BROWN SNAKES AND THEIR RELATIVES Elapidae
Australia’s (and some of the world’s) most deadly snakes belong to this family. Many are similar in appearance and all should be avoided. Most of the country’s snakebites come from people either handling them or attempting to kill or remove the snakes. Best to call and expert if one gets into the house. 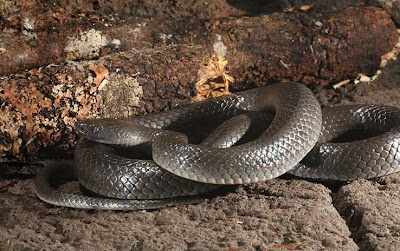 The Small-Eyed Snake (Cryptophis nigrescens) is a small snake rarely over 1m in length. They superficially resemble the Red-bellied Black Snake and small Slaty-grey Snakes and feed on small lizards and frogs. These snakes have been found hibernating in numbers in the southern part of the country. The bite is painful and requires medical attention, especially if bitten by a large specimen. One fatality was recorded in 1965. It is a nocturnal species but can be encountered if rock-turning or bark peeling. I have seen one here on a rainy night. 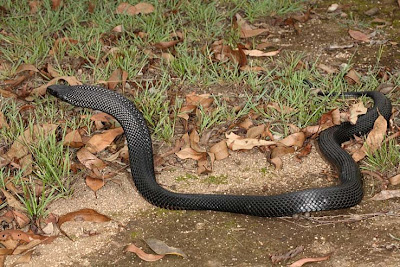 Red-bellied Black Snake (Pseudechis porphyriacus) grow to 2m in length and is not uncommon. It occurs along waterways where it feeds on a wide variety of vertebrates. When cornered, the snake puts on quite a display. If bitten, medical treatment must be sought. Grassy areas along streams are ideal sites for this species.

There are doubtlessly other snakes around the place but the above are the ones we have seen. If anything else turns up, you'll hear about it. Thanks to Michael Cermak for comments and corrections.
Posted by Mr. Smiley at 08:52:00

With that many reptiles I am amazed that there are any little critters left in the area! Clearly the rainforest is a very productive place.
JimA

Ah yes, just wait till you see the lizzies.

The free Snakes pictures,Snakes videos and more types of snakes About Us in the http://www.snakes-house.com/