Crickets in the Rain

Late autumn rains bring out the calls of many creatures in the Queensland rainforests. Crickets are contributors to many of the loud sounds we hear after dark. Mole Crickets commence calling on dusk from burrows in the ground. Their calling is low and guttural and continues for 10-15 minutes, then it ceases. They are followed by a number of other cricket species. Among them are the impressive burrowing crickets of the genus Cephalogryllus. At least 13 species occupy the eastern coastal eastern coastal forests of Australia. Each area or mountain range seems to have its own species, and there are some sympatric species. A single species has been described from Western Australia.

Cephalogryllus sp. probably tau Otte & Alexander is commonly heard around Kuranda. Further study is needed to establish its correct identity since a series of different-looking males have been dug from burrows in Kuranda. 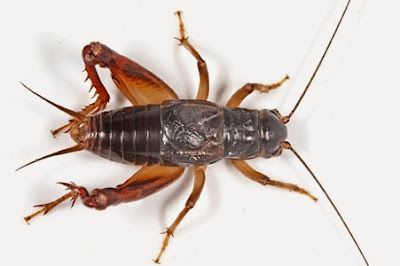 This is a large cricket, some 25-27 mm in body length with very sturdy hind legs that are probably used in shaping the burrow. The wings are short and used solely in sound production; the crickets cannot fly. These crickets live in the ground and males sing from the entrance to their burrows on wet nights from February until August. There are many males per unit area in the rainforest but their calls are not synchronised. As a result the background is a continuous din of cricket calls. The ambient "din" can be heard in the recording presented here. The tape recorder was positioned about 16 cm from the entrance to the burrow. Calling ceases at some stage late in the evening, probably as a result of decreasing ambient temperatures. Females have not been found wandering around after dark as one might expect. The purpose of the calling song supposedly is to attract females for mating. Perhaps, these crickets sing for other reasons, such as territoriality. By morning, the burrows are closed and the occupants remain underground during the day.
Posted by Mr. Smiley at 17:08:00 No comments:

A couple of years ago I was tricked by the call of the Common Nursery Frog, Cophixalus ornatus, It sounded much like a cricket and I spent a lot of time looking for the wrong perpetrator. 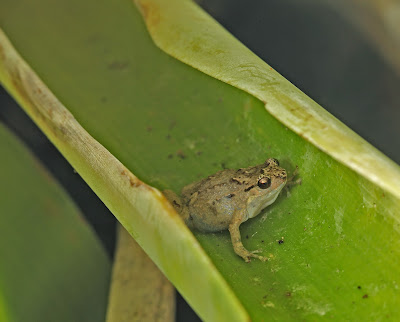 It took ages to locate the caller because it was well concealed and highly ventriloquial. The frog was hiding in the base of a bromeliad and it emerged, ever so slightly, on wet nights to produce its song. The calling song is very distinctive and can be heard at the link. Most people who live in the Kuranda area are familiar with this call but few have identified its source.

The frog seems very small in comparison with the intensity of the sound it produces being 25 mm in body length. These frogs are a bit peculiar in that they lay eggs in moist leaf litter and the tadpoles develop wholly in the egg with a tiny froglet eventually emerging. The feed on small insects.

There are not many grasshoppers that are known to change colour once they are adult. Most grasshoppers have nymphs (juvenile stages) that illustrate a range of colours and patterns but once they undergo the last moult to adulthood, that is it; they all are very similar in appearance.

A notable Australian exception is the Chameleon Grasshopper, Kosciuscola tristis Sjostedt. This grasshopper is a member of a genus comprising five species that inhabit grasslands in the southeastern portion of the continent. K. tristis occurs in alpine regions above tree-line at elevations usually greater than 1680m. Hikers often see individuals basking in the sun on granitic boulders, so it is a relatively well-known species.

It is remarkable grasshopper because adult males can gradually change colour in response to temperature. Males are black at night or on cloudy days when the ambient temperature is low but they respond to higher temperatures by slowly turning blue. 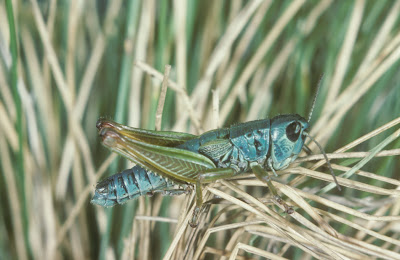 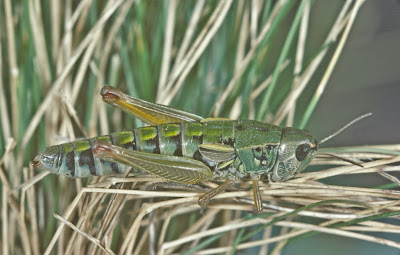 As unusual as this might be, there is an unrelated grasshopper in northern Australia that also changes colour but probably for different reasons. 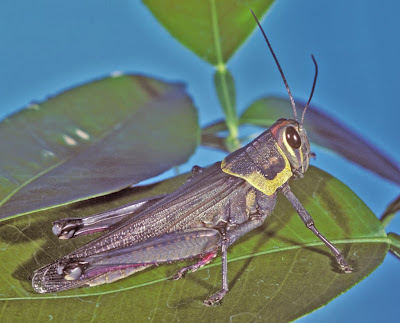 The above grasshopper has recently moulted into the adult stage. After a short period of time the greenish yellow on the thorax will spread to the entire body rendering it a greenish yellow appearance. 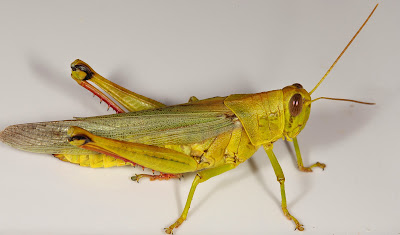 The above is an adult that has undergone the change from grey to green. It was found in a very dry, overgrazed pastureland with limestone outcrops on reddish, rocky soil 45 km NW of Chillagoe, Queensland. This appears to be a range extension for the species. It was previously known from a few localities near Lakefield on Cape York, Qld and along the coast adjacent to Groote Eylandt.

It was with considerable interest when I received a photo for identification from Keith and Lindsay Fisher that had similarities to V. sp 1. It was found around their place in Julatten, Qld. Note the resemblance of the colour pattern on the pronotum to the first photo above.

One of the identifying characteristics of Valanga sp. 1 is that it has bright red hind tibiae, whereas, V. irregularis has dull hind tibiae and the spines are generally tipped with black. Theirs was one of the many colour morphs of this latter widespread species.

V. irregularis frequents gardens, orchards and a number of agricultural and horticultural crops. V. sp. 1 prefers life on shrubs or in tree tops and is of no economic concern. 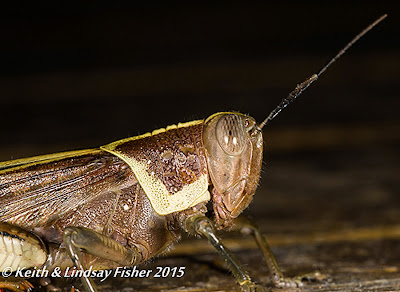 But why does V. sp. 1 change colour so dramatically after becoming adult? No one knows. Here is a ready-made study for a student looking for an unusual project.

Here we have two Australian grasshoppers that have biological characteristics displayed by no others anywhere in the world. Just more examples of a fauna that is unique and worthy of further study and protection.

The Lecithoceridae is predominantly and Old World moth family that is tropical or subtropical in its distribution. These tiny moths are related to the Gelechiidae. In fact, it was included in that family for years. Some rather technical characters have been used to continue to keep the family separate from the Gelechiidae. About 6 genera and some 45 species are known from Australia. We are fortunate to have a number in our area. Some are drab, others much more colourful. Most perch in a very characteristic position. Adults are usually nocturnal. The larval habits are generally unknown but some have been reared from collections of leaf litter and grass tussocks.

These are small moths. The squares in the light sheet are approximately 1mm. Here are a few examples. 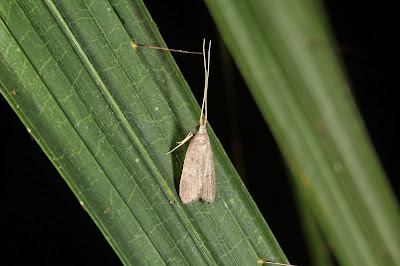 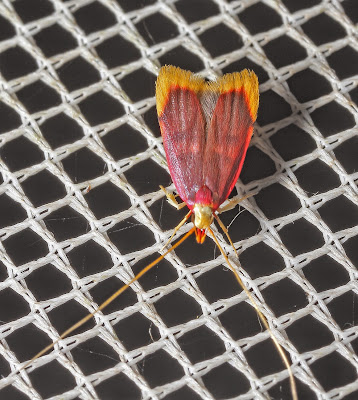 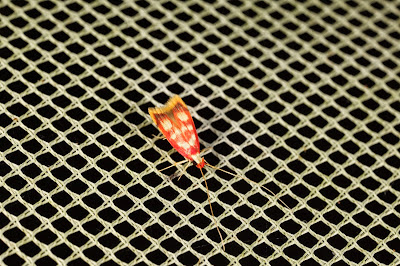 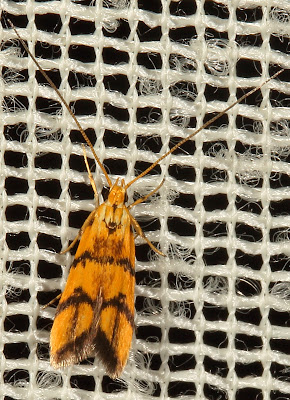 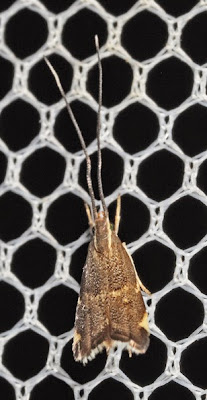 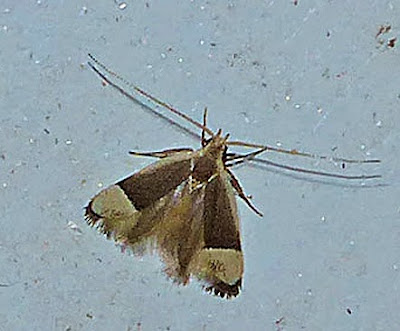 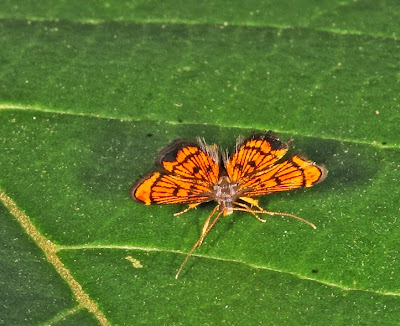 This is the most gaudy example of the family in the eastern tropics. It seems to be active during the day, displaying itself in the open while the other species adopt a characteristic stance and remain motionless during the day unless disturbed.
Posted by Mr. Smiley at 10:55:00 No comments:

The next National Moth Week will be held July 18-26, 2015 so start planning your events now!   Register your event online – click here for registration form.

Please note that there is one registration form for events worldwide, including the USA.A map showing all registered events will be published in May, 2015.This year, National Moth Week will spotlight the Sphingidae family of moths found throughout the world commonly called hawk moths, sphinx moths and hornworms.    Click here for Press Release
It is actually meant to be an "International Moth Week". They want to know of any "mothing" activities that will take place around that time. And note that Hawk Moths, Sphingidae, will be highlighted this year.