Size Does Not Matter

Wandering around the rainforest at night always reveals something of interest. Recently in the Daintree there was a "Sipyloidea" night. It seemed everywhere you looked there were Sipyloidea stick insects. 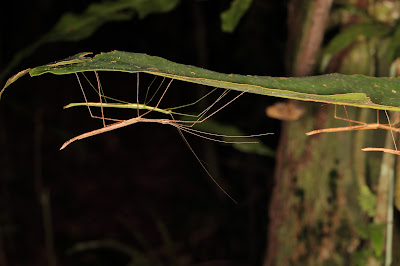 At least 3 species of Sipyloidea were found at the same place and on the same plant. Perhaps, the fragrance of the new vegetation was the attractant or, perhaps, pheromones from the individuals kept attracting additional sticks. Above we see a green species, S. rentzi, and a brown one, probably S. caeca. Other individuals are to the right. S. larryi was also present on the same plants. Most seemed to be feeding on the new vegetation, others were just sitting in one spot.

However, the evening was not such a success for one of the large individuals of S. larryi. 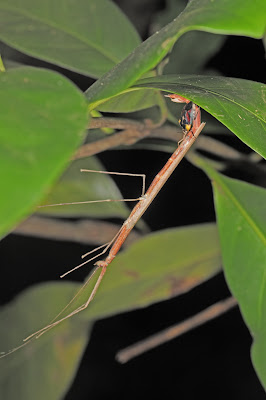 This stick is not dangling in mid air. It is being held by a predatory stink bug, family Pentatomidae. 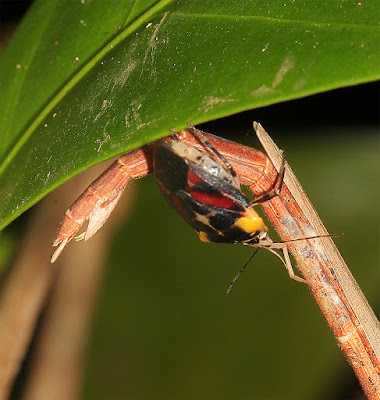 The bug has inserted its beak into the unwary stick and virtually paralysed it without any visible resistance from the host. It will suck what it needs and then drop the stick which will land on the ground and probably be consumed by ants or other scavengers.

Take Home Message
Be careful on those seemingly pleasant forays after dark.
Not all Stink Bugs are damaging to your veggies!
Posted by Mr. Smiley at 18:19:00 2 comments:

Had a visit from my friend Jack Hasenpusch the other day. He noted that Australia Post (the Australian postal authority) had issued stamps featuring Australian Jewel Beetles (Buprestidae). To my surprise and pleasure, "Beetles on the Bottle" (Gwynne,Rentz, 1983) got mentioned. The interest just goes on and on. 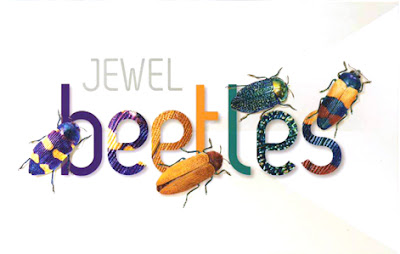 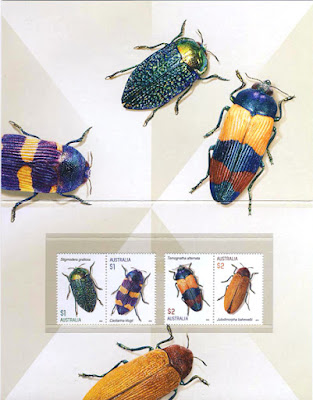 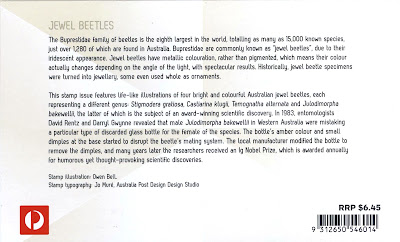 buprestids mistake stubbies for females (Coleoptera). Journal of the