For a few days recently it was unsafe to walk under our large Flindersia tree. [There are 14 species in the genus and this one is probably F. bourjotiana]. The pods were being dropped from about 20-30 m height! 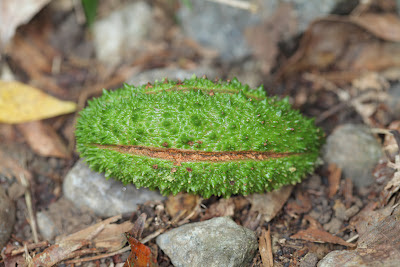 Each pod measures about 9.5-10.5 cm in length and covered with stout spines. So being hit by one from such a height would not be a pleasant experience. 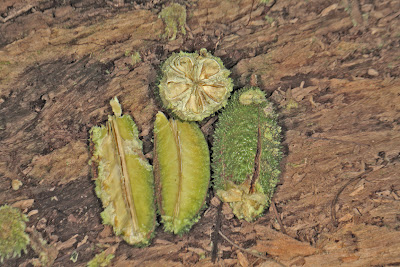 Most of the pods were chewed and partially opened. 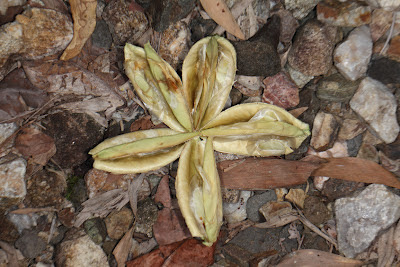 A normal Flindersia pod has 5 star-like arms and a seed in each. 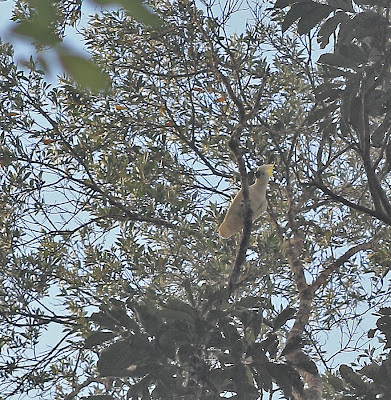 The culprits were masses of Sulphur-crested Cockatoos. With an abundance of riches, the birds would feed partially on a pod and then move to the next one. Multiple pods are borne on stems so many are dropped without a beak mark.

Once on the ground, the pods dry out quickly and open within a day or two. That allows birds and ground dwelling mammals to partake of the riches since most of the seeds are still intact within the pods.

At first one might be upset with the seemingly wanton destruction brought on by the feeding birds. But it does have a beneficial effect of providing food to other animals. Some, like the Musky Rat-Kangaroo,  move the seeds away and store them for later use. This disperses the seeds and probably gives rise to new trees well away from the mother-tree.

After about 3 days of concentrated work by hoards of cockatoos, they left and the ground is now littered with the pods that are providing food to other creatures of the forest.

In a previous blog I noted a couple of caterpillars that I would attempt to rear to maturity. Until now the efforts went unrewarded.

We know the identity of one of them. 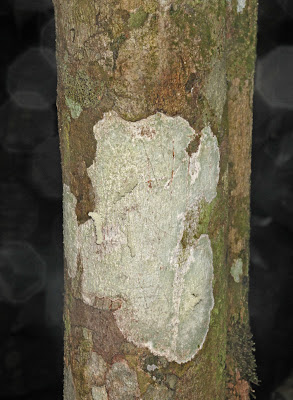 To review, I noticed the white caterpillar on tree trunks covered with lichens and algae.

The individuals had an irregular appearance. Dissection of one of them revealed that each was covered with the lichen material that was held in place by threads of silk. 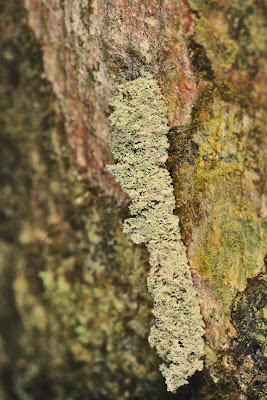 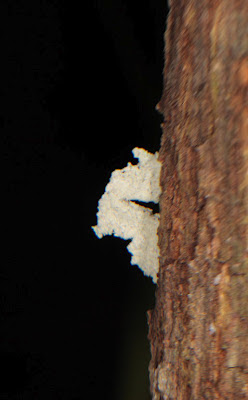 The caterpillars move with an arching gait and travel up and down the trunk over 2m per day. But they always seem to return to nearly the same place each day. 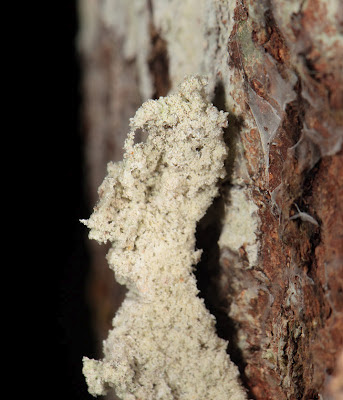 The caterpillars seem to feed on the white-patch lichens but because of the concealment of the mouthparts, it is difficult to determine if they are feeding on anything else. It's obvious that the caterpillars incorporate some of the green material into their camouflage. Ants and other insects travel past the caterpillars and pay them no attention.

This year, the caterpillars were found on palm trunks and the trees where they were last year had no caterpillars on them at all.

I took two of the larger larvae and scraped a few bits of lichen off one of the trunks and placed it in a container. After a few days a cocoon was formed. 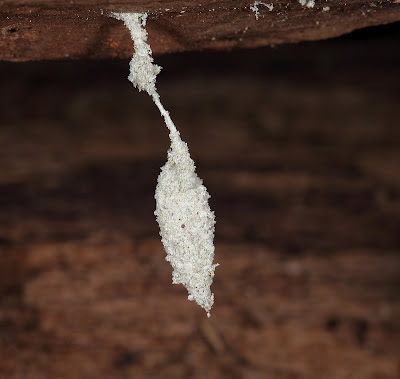 The coccoon. Each cocoon was borne on an elongate stem. After 29 days, at room temperature, the moth emerged. 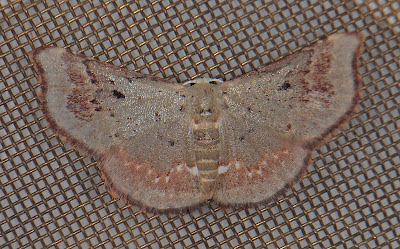 The moth is relatively common and turns up regularly at the light sheet. Seven species of Enispa are known from Australia. It seems that little is known of their habits. Common (1990) records one species, E. plutonis (Lucas), living in spider's webs where they feed on the detritus such as dead leaves and the left-overs from the spider's catch. The caterpillar is naked and not covered with any detritus.  Its pupa is suspended without any cocoon by its anal hooks. This is very different from E. prolectus. With E. prolectus, there is a cocoon that is suspended on a stem which is firmly attached to the substrate by silk.

The next step is to find the distinctive cocoons in the habitat. They most likely move to adjacent vegetation or, perhaps, under loose bark. This is in short supply on rainforest trees.

Thanks to Buck Richardson, and his moth identification site, for aid in identifying the moth.

A daily survey of the orchid collection provided this little vignette.

The Orchid Weevil, Orchidophilus aterrimus (Waterhouse) was about to be attacked by a Jumping Spider. 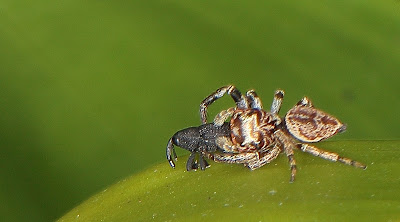 Ah, I thought what a great thing. Biological control in action. But alas, it was not to be. 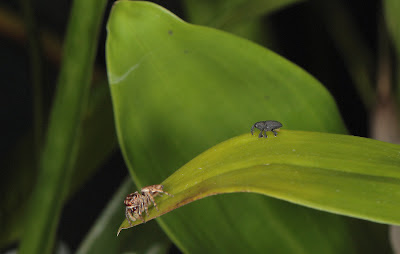 But after a fraction of a second, the spider released the prey and moved away. Several bouts were observed in just a few minutes time and then the spider hopped away. Note the weevil is firmly attached to the substrate. So that got me to thinking what makes a "successful" pest.

In this instance, perhaps, the spider could not penetrate the tough exoskeleton of the weevil. Entomologists will tell you difficult it is to pin a large weevil. A #5 stainless steel pin often will not penetrate the exoskeleton of the specimen. If this is working in this example, it is surprising the spider's chelicerae could not find a membrane or other soft point to penetrate. But after several attempts it could not.

And, perhaps, the weevil excreted a chemical of some sort that discouraged the spider. But if this were the case, the spider would not have made repeated attempts at capture.

The weevil stayed "glued" in the same position for 15 minutes until I decided it was time for the alcohol treatment. The spider wandered off. There are not many food sources in the shadehouse so I hope the spider will sharpen its chelicerae for the next encounter. 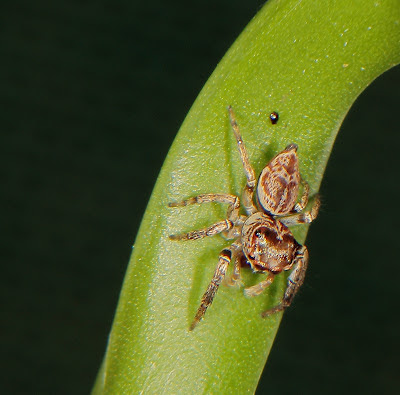 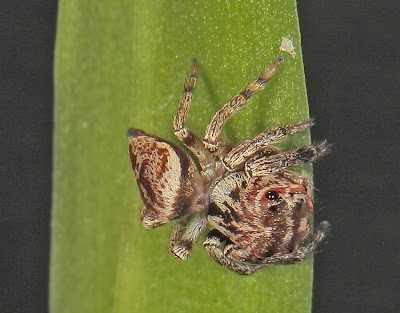 The spider. It is a Jumping Spider, family Salticidae. There is a great spider site on the web dealing with Aussie spiders. But I cannot reliably identify the genus of this little spider so will not guess. Perhaps, a reader will be able to put a name on it. 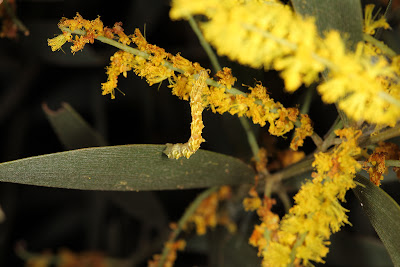 Roadsides in the  mixed woodlands not far from the rainforest have been clothed in a blanket of bright yellow with the flowering wattles (Acacia spp.). Close examination of the flowers revealed a yellow caterpillar consuming the blossoms. 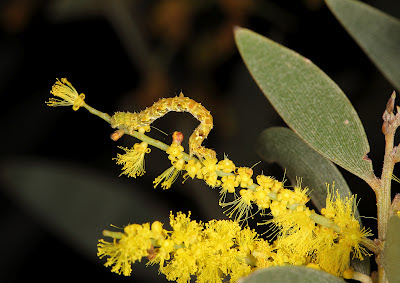 The arching gait suggested a looper, a member of the Geometridae. 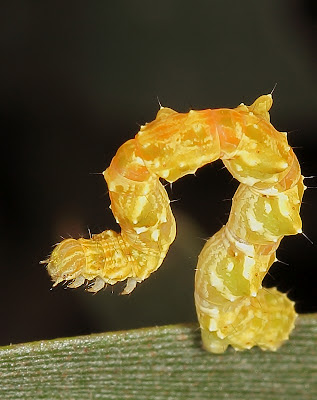 A few were removed with some blossom and after a few days they formed a chrysalis and about 10 days later the moth emerged. This moth has two colour morphs. The brown one shown above and a green morph. It is not uncommon and is often found at lights in the rainforest where there are also acacias but of different species. [Thanks to Ted Edwards for noting the name change for this moth.] 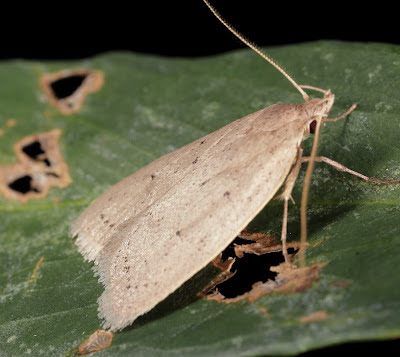 This little moth, a member of the huge family Oecophoridae, was common sitting on grass blades after dark on a very cold evening in the Davies Creek area, Qld. Grass of several species was deep and green. 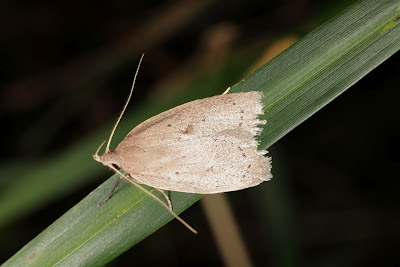 One might think the moth is therefore associated with grasses. Well it might be but a female was observed ovipositing (egg-laying) in the bark of a Baker's Oak,  Allocasuarina torulosa. 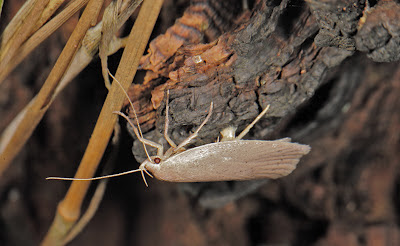 Perhaps, the eggs hatch and the tiny larvae drop to the ground and live on grass roots until they emerge and then sit on the grass blades after dark. Laying ones eggs in bark at the base of a tree like Baker's Oak is a rather precarious activity late in the winter at this locality. Soon the "fireies" will be setting the habitat ablaze with their "prescribed" burning. From the looks of the trees in the area, this a regular process. It would be very lucky for the eggs of this moth to survive what appears to be ahead for this habitat. But then, obviously some do survive such treatment.
Posted by Mr. Smiley at 14:01:00 2 comments: 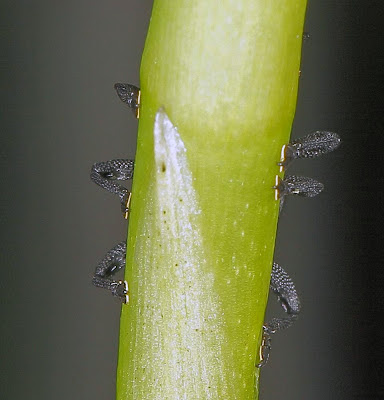 The site of these feet on the developing flower stalk of a treasured orchid is a cause for some concern. 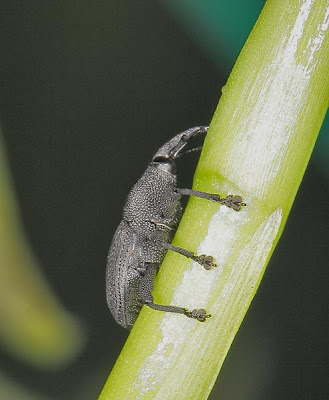 This is one of the orchid weevils, Orchidophilus aterrimus (Waterhouse). I have written about this before. Several adults of both sexes have been found on developing stalk. Where the larvae reside is not known but I suspect they occur in the pseudobulbs of the plants themselves.

A few days after feeding this spot appeared on the stem apparently where the weevil had inserted its beak to feed. I'll watch this and see if it results in any damage to the flowers. 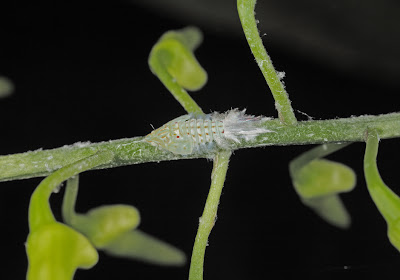 A few days later, this critter was found feeding on the developing flower stem of Dendrobium speciosum.  Closer examination revealed what it is. 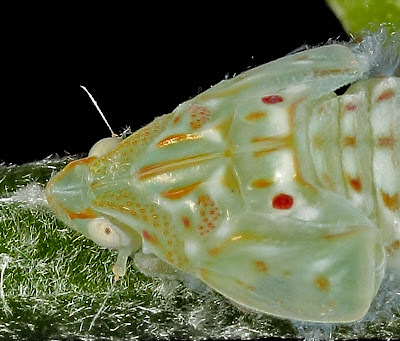 The lines on the thorax are the giveaway. 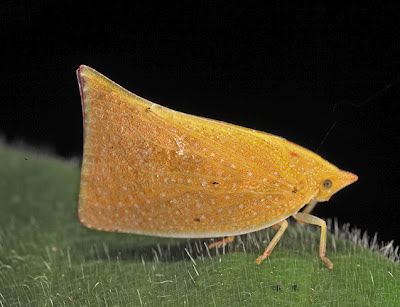 It is a nymph of a species of Siphanta. I have written about these before as well. I have no data on what this single nymph might have done to the developing flowers, but it was not given the chance to proceed with its development! Spring is springing.
Posted by Mr. Smiley at 13:19:00 No comments:

Three times in 12 years Emerald Forest Doves have mistaken our windows as extensions of their forest habitat and have paid the price. Yesterday one bird met its fate. When I picked it up I noticed a very large (relative to the size of the bird) Louse Fly. I have written about these flies before when they showed up at the light sheet. Louse Flies are external parasites of birds and mammals in the family Hippoboscidae. You can get an idea of the diversity of the family from the images on the site.

Louse flies are remarkably adapted for existence in bird feathers. Some species detach their wings when they have found the proper host. Eggs mature within the mothers and the living larvae are deposited away from the host and they have to undergo the lottery that many parasites are forced to endure. The right host has to come along at the right time for the larvae to continue their development.

The flattened appearance of the adult likens them to lice, hence the common name. Several are parasites of livestock and are transported around the world on their hosts. Australia has several introduced species that are just such pests. 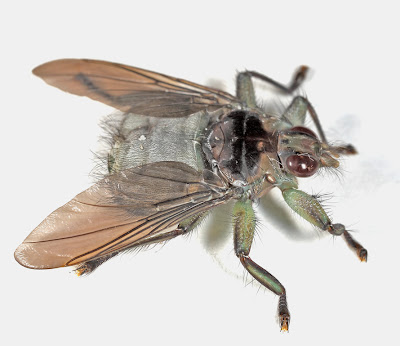 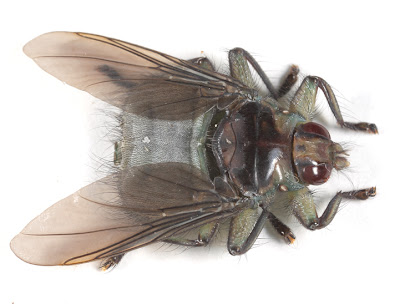 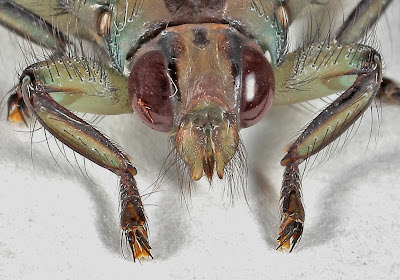 The business end. The piercing mouthparts enable the fly to suck blood from the host, probably from the feathers. The flies are very fast-moving. This enables the fly to dodge the preening activities of the bird without being harmed by its beak.

But nothing is straight-forward in this world. The odd creature below was also found within the feathers of the poor bird. 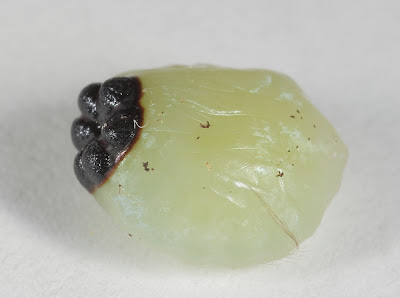 It is may not associated with this fly. It does not seem to be a puparium. So what is it? Maybe a reader will shed some light on the subject. 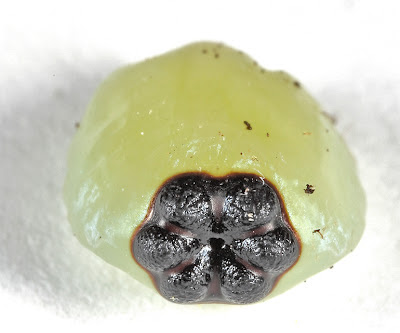 Frontal view. It does not seem to be a larva. It did not move and there seems to be no opening in the midst of the teeth-like structures. Any ideas?

Along related lines, have a look at Piotr's blog on another, much more robust, parasitic fly.