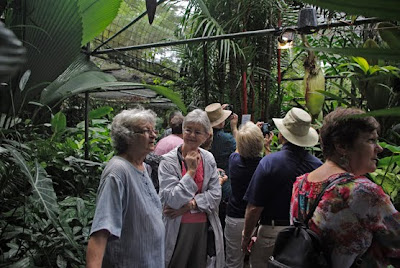 Well as a tropical low develops over the city of Cairns, the Titan Arum in the Cairns Botanic Gardens continues to develop. It is a wet time but hundreds of people, both locals and tourists alike, visit the gardens each day to "see if it has opened". It might be a couple more days till it does but the spathe is starting to unfold and with it the smell is attracting an array of local insects. here we see a group if visitors and the arum, named Hannibal, in the background. Judi and Donn Corcoran have been keeping vigil at the "site" every day for a week. They have met a lot of folks! 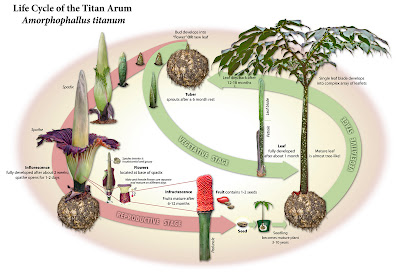 The life cycle of the Titan Arum. The bulb can be massive weighing more than 100 lbs in some examples. [The would be a challenge, but would not deter our local Brush Turkeys from attempting to dismember a plant] (from the web) 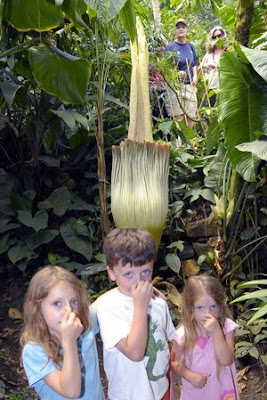 Not only children find the smell repulsive. The foetid odour has been likened to rotting fish, gym socks, porta potties and the like. But it is the smell that attracts the potential pollinators. 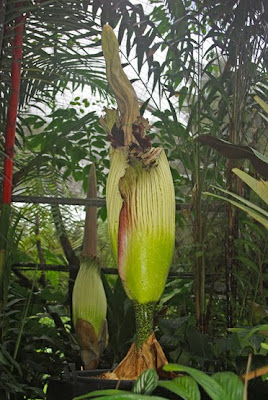 "Hannibal" is in the foreground and "Spud" is just behind it. The idea is to have two plants flower at the same time. The reason is that the plant requires cross pollination to set seeds. In nature the strong odour wafts through the jungle deceiving a variety of insects that normally congregate on dead matter.
Fortunately, it does not appear that there are very specific pollinators, otherwise we might not have any luck with the plants in Cairns. The Titan Arum is native to Indonesia and we have few insects in common. It is thought that certain bees, called Sweat Bees, halictids that are attracted to human sweat for the salt and mineral content, are the pollinators in nature. But there are other more general visitors to dead animals that are also involved and we have plenty of them here in Cairns. 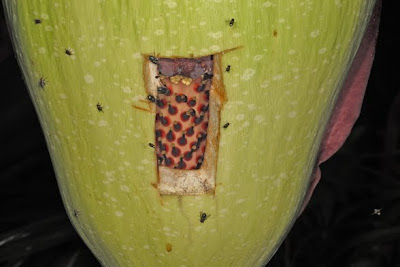 A patch was cut at the base of the plant so we could get an idea of what was going on inside. You can see the flies resting on the spathe. 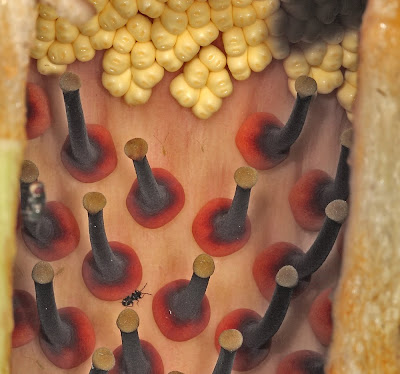 Looking inside we can see the female parts sticking up and ready to be fertillised. The pollen is in the yellow capsules at the top, But it will not be released for a while. Since the plant must be cross pollinated to produce seed, holding back the pollen plant for a while would allow pollinators, in nature, to visit and bring pollen from other plants. This is the reason we have two plants that we hope will flower simultaneously. If you look carefully, you can see several insects in the flower. 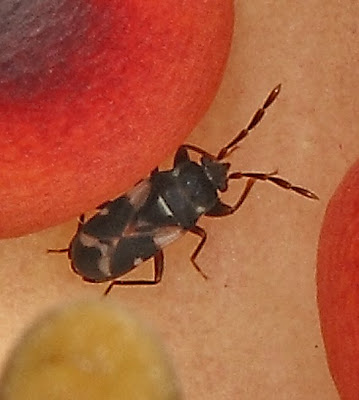 This is a bug, probably lygaeid. It is very small and we wonder what it is doing there. 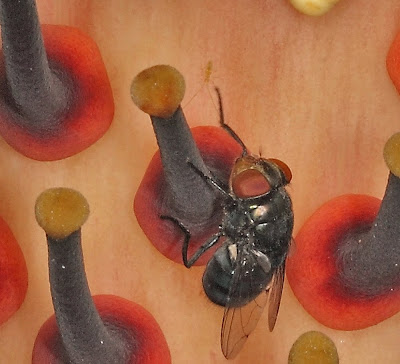 This is one of several species of blowfly that we have observed on the plant. This sort of blowfly is attracted to decaying animal matter. What is surprising about the flies on the Arum at this point is that they do not seem interested in feeding. They are "just there". [Look carefully!] 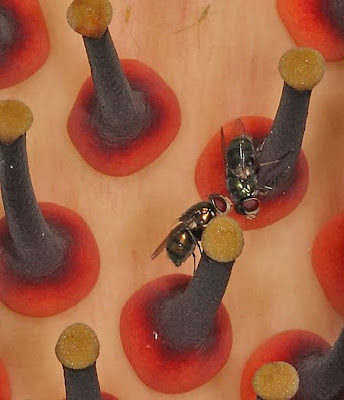 Perched atop the female flower but with no mouthparts engaged in feeding. 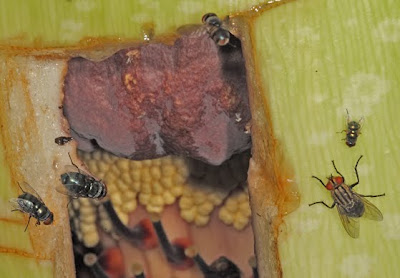 Here are a couple of blowflies and, either a small blowfly species of a fly of the family Muscidae and a Flesh Fly, Sarcophagidae. Flesh Flies breed in carrion and dung and usually have a greyish and striped appearance. 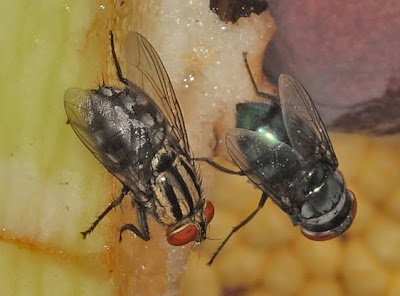 A flesh Fly and Blow Fly side by side. 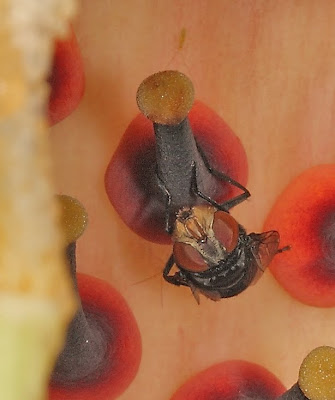 Blowfly bliss. This fly seems quite content resting on the stigma. It made no attempt to feed. It was just "drawn" there. 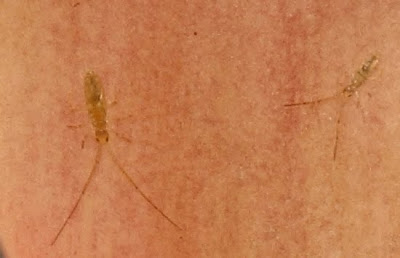 As noted above, careful observers would have seen these little cuties at the base of the stigmas. They are Springtails, order Collembola. These are arthropods that are no longer considered to be insects. They are of a different lineage. They are found in most habitats. They would have had to do some fancy "springing" to find themselves within the developing Arum titan. The would probably feed on the pollen and even some microorganisms that might also be attracted to flower.

This is "Spud", the second Titan Arum. It looks about a week away from flowering. We'll keep you posted. (By the way, the names were chosen by "Jacko", the gardener who has been caring for the plants. How he chose the names, well you'll have to ask him. He says all this is like waiting for the first child to be born!)
Posted by Mr. Smiley at 15:01:00

Hi Dave
Great write up and photos.
The Cairns Bot Gdns people are to be congratulated to allow a "window" to show what's going on inside.
There is a lot of research into temperature control within the Arum Flowers.
It is important for controlling the sequential maturing of male and female flowers.
It also impacts on the insects which are not feeding (as you note), but they seem to be drugged (perhaps not an accurate wording on my part) by the hot humid atmosphere inside the flowers.
Aroid pollination

An unusual example of flowers able to control their temperatures.
And we were once taught that only high-order animals have thermoregulation?
Cheers
Denis

Hi Dave, Jacko here mate. As for the names given to the Amorphophallus titanum. Hannibal is after Hannibal Lecter, he was a guy into flesh, and these guys stink like dead flesh, got it! Spud, well that is after a wonderful gardener who previously worked at Cairns Botanic Gardens. These plants grow from a big potato-like corm, spud, its obvious to me! Please please do an article for the Gardens magazine on your insect and flower shots, they are wonderful.