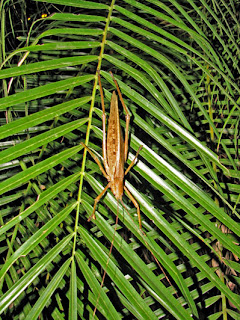 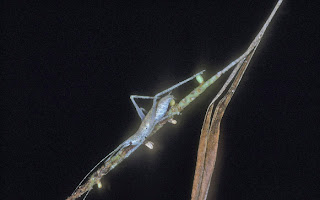 The Queensland Palm Katydid (Segestidea queenslandica Rentz) is a large insect with females (the larger of the sexes) measuring around 9 cm (3.5 inches) from the head to the tip of the forewings. Males are a bit smaller. They are known from rainforests around Cairns and Kuranda and the Daintree River area of far north Queensland where they are relatively common. So it is rather surprising that the species was unnamed in the scientific literature until recently (see Rentz, below). The fact that such a large insect, one of the largest of Australian katydids, can go unnamed for such a long time is an example of just how poorly studied the Australian insect fauna really is. I had known about the existence of the insect since the early 1980’s and had been collecting information on its biology and distribution since those early collections.

This katydid is peculiar in some respects. Males are very rare. in fact, only one is known. Females are fairly common and many rainforest folk are well aware of the species. Study of captive females reveals that the species is http://www.blackwell-synergy.com/doi/abs/10.1046/j.1420-9101.2001.00254.xfacultatively parthenogenetic, that is, females can produce eggs that hatch without the mother ever having been mated. The species has been raised through several generations in the Museum of Victoria, Melbourne, without any males ever being produced.

Another oddity associated with this species is its food. It feeds only on palm leaves. It has mandibles that are unique and appear to be modified for this purpose. Other members of the genus occur throughout the Pacific and some cause major economic damage to Coconut Palms. This species feeds on a variety of palms and because of its size and appearance is an excellent zoo animal and easy to raise in captivity.

Females need to descend from their perches in palms to deposit eggs in the ground. This is when they are easily seen and subject to predation. Eggs hatch in late autumn and the juveniles (nymphs) seek small palms for feeding. Lawyer Palms (Calamus spp.) are usually chosen because the leaves are tender and there is an abundance of seedlings in the rainforest. The nymphs are protectively coloured (see photo) and resemble bird droppings with their white, mottled pattern. As they mature they ascend palms and change their colour to mottled brown and after the final moult, the adult dark brown colour is achieved.

The Queensland Palm Katydid recently was featured on the TV show Totally_Wild where its biology and habits were noted.

Having seen the pinned specimens, I will assert that this is a princely katydid, indeed.

But what about its song? If all reproduction is asexual, maybe it doesn't need one?