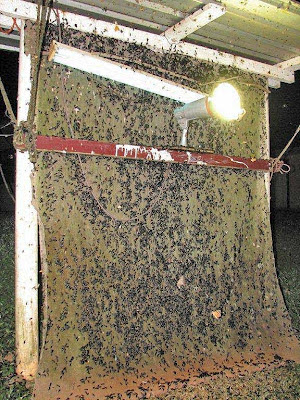 This is the light sheet at my friend Jack's near Innisfail. Those black insects are a carabid beetle, Gnathaphanus philippensis. These beetles have appeared in huge numbers up and down the coast. Everyone who has the money to buy petrol has seen them on the ground in petrol stations where they are attracted to the lights. They are a nuisance around swimming pools. 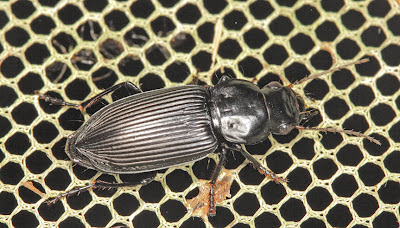 Up close it's not a bad looking beetle. The grooves on its wing covers are distinctive. Carabid beetles are called Ground Beetles. They are predators and feed on other insects. Jack tells me about every 12 years, this species erupts in great numbers for a few weeks. Since the last time it occurred was at the Millennium, the locals called it the real Millennium Bug. But that distinction formally goes to a true bug, Drepanovelia millennium Andersen & Weir, a water bug described at the turn of the century.

So enjoy. It will be 12 years before you see them again in these numbers.

Thanks to Jack Hasenpusch and Tom Weir for notes.

There's enough there for a pie!