Mt Lewis is wonderful area of far north Queensland near Julatten, not too far from Cairns and Mossman. The road is not bad, in fact it is pretty good and was rehabilitated after Cyclone Larry a few years ago. During very wet periods the gates may be shut. And it can be wet, especially near the top of the mountain at the end of the road. 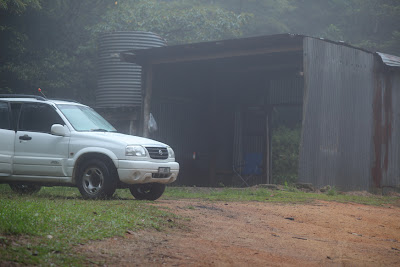 Some 30 km from the highway at Julatten you will find "The Hut". It is usually misty and cool. Afterall, the elevation is over 1200 m.

Mt Lewis harbours rather mixed memories for your truly as you will see later. Each time I have been there, there is some "occurrence" for lack of a better word. I have visited the place several times commencing in 1988.

The forest is wet all of the time and as a result takes on a very different appearance for other rainforests in the AthertonTableland region. The trees are moss-covered and laden with epiphytes of all kinds. 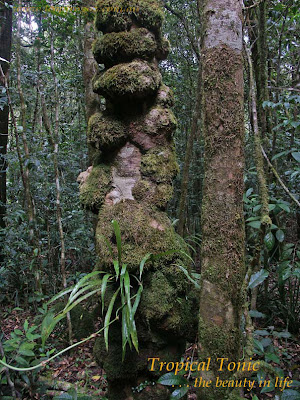 The biota of the region is said to reflect that of ancient Gondwanaland. As a result, if Global Warming continues, some of the animals and plants on this high mountain may not be able to adapt to warming, 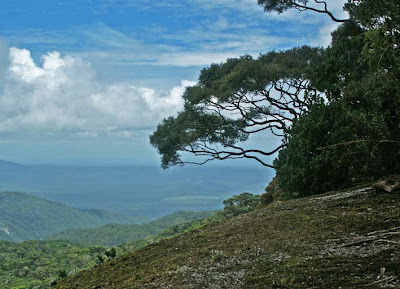 Buck Richardson photo
Views are spectacular when the fog lifts. Here you can see Mary Farms to the south. 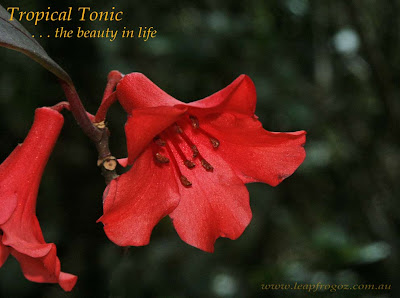 Buck Richardson photo
Mt lewis is a place where you can see native Australian rhododendrons. If you strike it just right, you can see them in flower.

Our quest this time was to find and photograph cockroaches of the family Tryonicidae. These are rather standard-looking roaches to the uninitiated but they are important. They are relics and have their closest relatives living in similar conditions in New Caledonia. 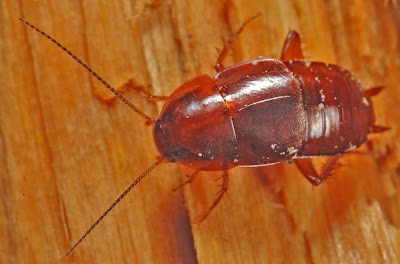 This is Tryonicus mackerrasae Roth, a species named by the late Louis M. Roth  for M. Josephine Mackerras who was an authority on Australian cockroaches and described many species in a series of important monographs.  Note the short wings. 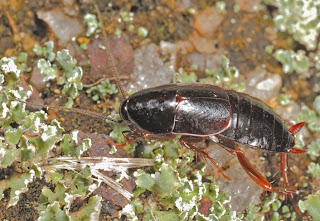 A slightly larger species is Tryonicus monteithi Roth also much darker in colour.

These cockroaches spend their time under wet, rotting logs. Their feeding behaviour has not been studied. They may eat fungi, wood, dead insects or something else. They move like lightning and in the dark forest, a headlight is necessary to properly see them. 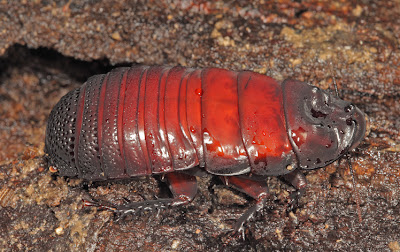 Other roaches seen were wood roaches of the family Blaberidae. This is Sloane's Wood Roach, Panesthia sloanei Shaw. This colourful species lives in logs where it feeds on decaying wood. It is "colonial" in that several individuals live in the same log and the young seem to be looked after by the mother. These roaches are very important in the return of dead wood to the soil. 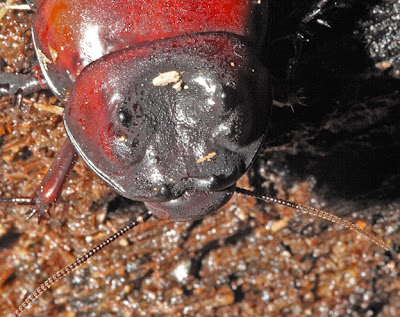 The prothorax of Panesthia species is variously modified. This may aid in the movement through the wood and in the formation of galleries where they live.

Wood roaches have no disgusting habits--unless eating wood is considered "disgusting". They produce no repulsive smells and can be handled without mishap. Their spiny legs, however, are very strong.

A few other organisms encountered during our eventful trip are as follows. 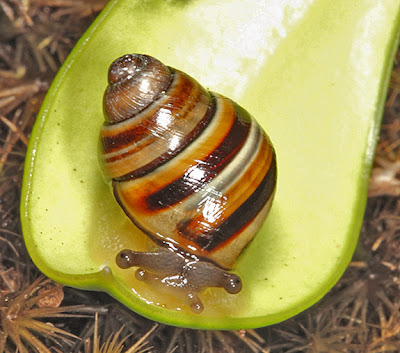 This snail has one of the most unusual names in the Australian biota-Crikey steveirwini Stanisic. It is a land snail that lives on vegetation. Quite a nice looking snail. 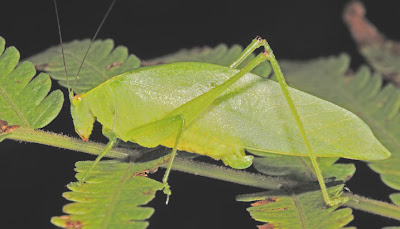 A rather plain-looking katydid, Caedicia goobita Rentz, Su Ueshima was described from Kuranda. This record extends the range and altitudinal range of the species.

But what was I alluding to in the introduction about having mixed feelings about Mt Lewis.

Well in 1988 I spent the night in the hut (which looked about the same as it does today) with Don Fitzsimon who was at CSIRO, Atherton where I was seconded for 4 months work in the rainforest of the northern tropics.

In the evening I was looking around the margins of the rainforest for orthopteroid insects. I felt something get into my eye. In looking in the rear-vision mirror, we discovered it was a leech. [Mt Lewis is the "leechest" place I have ever been to. The leeches are small and occur high in vegetation, so getting one on your face is not unexpected. ]

Well, to get it out was the problem. Don had left his glasses at home. I was panicking because I remembered vividly the stories of my colleague, the late Don Colless. He related how a leech got behind someone's eye and moved out of sight behind the eyeball.  He said the eyeball had to be lifted to free the leech. What to do on a rainy night 30 km from help. The more I thought about this, the worse I felt.

But after an hour and a half or so and much pulling of the eyelid, the leech fell out into the palm of my had. It was about the size of a small pea. That was it. No further problems.

This time there were two problems. One of our 4-member group got lost---for 17 hours. He had to endure a cold night in the rain and wind, and without a jacket. With much SES and Police help he emerged to following morning. 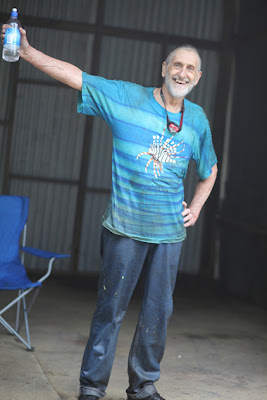 But I diverge. That was not the end of it.

As James and Bruce were leaving after dark the previous evening to fetch the police, Bruce just happened to mention "If you get a leech in the eye, it is best just to leave it alone and let if fall out on its own".

Within 10 minutes of their departure, that very thing happened--at the same place and about the same time as in 1988. I felt it enter the eye and as much as I tried, it could not be dislodged. It attached not on the pupil fortunately. I watched its progress in the car in the rear-view mirror.

Over the course of an hour it filled with blood and finally fell into the palm of my hand. The eye remained red for a few days and there is no damage to it.

So be careful on Mt Lewis. [I'm happy we found our cockroaches!] 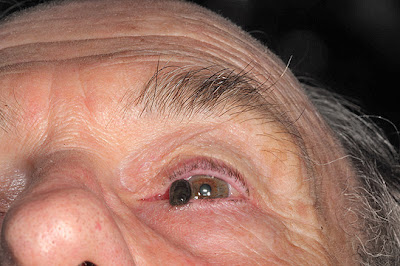 I'm glad you and Buck survived that trip.

Whoa! Great leech in the eye pic. Very cool... not that I would want one in my eye, but this is coming from someone who proudly and purposefully raised cockroaches (the hissing kind that look remarkably similar to your wood ones), mantids, millipedes, and various lepidopteran caterpillars in her single apt. days.

I shall never think badly about a Leech up my trousers again!
Denis

Ah what an adventure eh?! Glad everyone made it out alive ... the joys of nature - up close and personal - absolutely fantastic post, - cheers

Eye leeches! My eyes kept watering after you mentioned that...

OKAY! You've found the one good thing about Alberta compared to Queensland (no terrestrial leeches here) and also assured me nightmares to come.