A Night Walk in the Highlands

A walk in the high rainforest (over 1000m) outside of Atherton, Queensland resulted in some nice photo opportunities and some opportunities for the local leeches as well. They were thick in the rain and misty conditions and must make it hell for the local mammals. There were some nice insects out as well. And a few surprises were to make the evening a success. 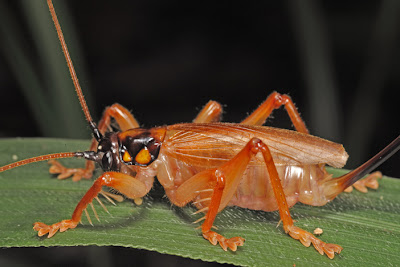 this Raspy Cricket, Gryllacrididae is probably an undescribed species. 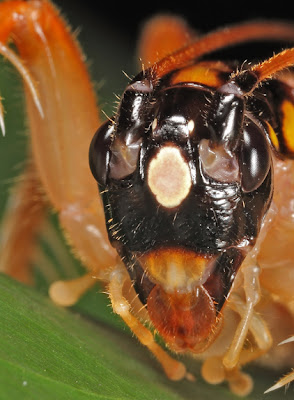 It provides a good example of a median ocellus, a structure noted before on this blog. it is thought this "eye" contains a single lens that detects light. This may be involved in helping the cricket find its way back to its enclosure after a night of foraging. 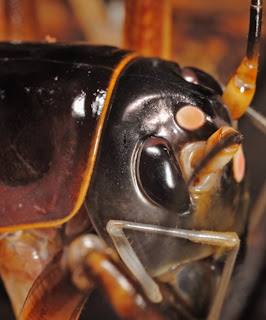 The White-kneed King Cricket, Penalva flavocalceatus (Karny); Anostostomatidae; Anostostomatinae  has a pair of lateral ocelli that may be used in a similar way to the median ocellus noted above. 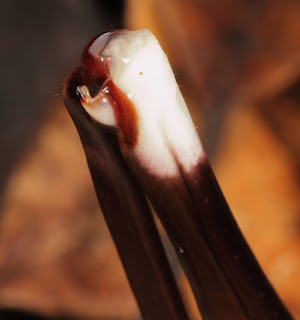 The White-kneed King Cricket, Penalva flavocalceatus (Karny), aptly named was described from Malanda, not far from where this photo was taken. It was described by a European "orthopterist" in 1929 from a series of specimens collected by some Swedish entomologists who were on a field trip in the area several years before.
The cover of darkness affords mating opportunities for craneflies (Tipulidae). This photo shows the halteres, the modified hind wings of flies that make flies flies! and fly! The halteres serve as gyroscopes keeping the insect on the right course during flight. 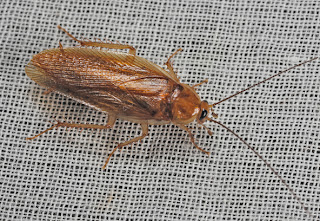 And there was an abundance of cockroaches, mainly of two species. This is Beybienkoa tolganensis Roth (Ectobiidae; Blattellinae). The marking on the pronotum (thorax) is distinctive. 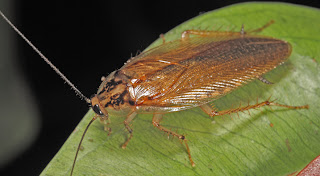 Carbrunneria barrinensis (Roth) (Ectobiidae; Blattellinae). was originally described in Beybienkoa, but was found to be in another genus later when glands on the surface of the abdomen were discovered. 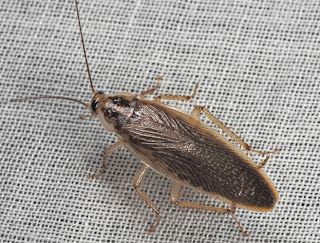 Johnrehnia geniculuteola Roth (Ectobiidae; Blattellinae) is in a different genus altogether. This genus has no glandular openings  on the surface of the male's abdomen. 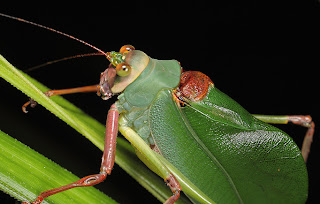 A nice find. Ozphyllum kuranda Rentz, Su, Ueshima (Tettigoniidae; Phaneropterinae) was not known from the Atherton Tableland subsequent to our rainy night walk. 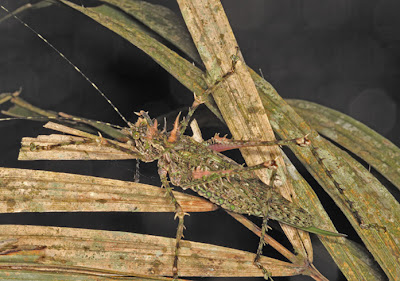 Phricta tortuwallina Rentz, Su, Ueshima (Tettigoniidae; Pseudophyllinae) is a study in "armature". It is protected with spines all over its body. The katydid in itself is quite harmless. Active at night, it  feeds on young leaves of a number of rainforest plants and uses the cover of darkness to lay its eggs in the ground. During the day it rests with legs outstretched on tree trunks and large branches. This is an unusual species in that males have lost the stridulatory apparatus that affords other in the genus to produce sound to attract females.

Phricta tortuwallina was described from The Crator, a locality not far from where this photo was taken. 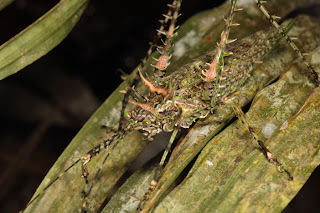 Phricta tortuwallina on a lichen-coveered tree trunk, this katydid would likely go undetected by vertebrate predators. 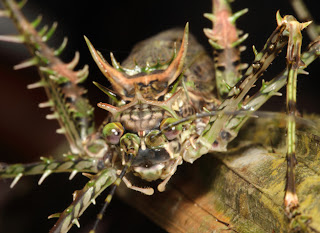 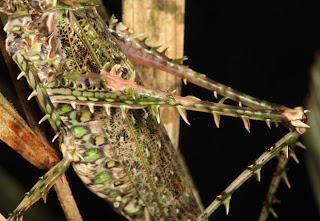 Phricta tortuwallina kicks vigorously with the hind legs when captured. The spines are sharp and would probably aid in its escape from the jaws of a bird or lizard.
Posted by Mr. Smiley at 18:37:00