Bees of a Different Colour

Honeybees of the genus Apis
Borneo is the centre of diversity for the genus Apis, the honeybee genus. Five species occur on Borneo. There is a wonderful book on the Honeybees of Borneo that should be in the libraries of all beekeepers and entomolgists with an interest in bees. The Honeybees of Borneo documents honeybees in Borneo in a most readable style. I was able to find two Apis species whilst in Borneo recently. Fortunately, one was the Asian Honeybee, the importance of which is noted below.
On a related matter, there is currently an entomological emergency of sorts in the Cairns area. The Asian Honeybee, Apis cerana, was introduced a few years ago, probably as a nest in the mast of a yacht. There are fears that similar introductions could bring the Varroa Mite, a feared destroyer of hives and a major threat to the honey business wherever it occurs. Asian Honeybees have other behavioural characteristics that warrant their control. They are aggressive and rob the hives of the commercial honeybee, Apis mellifera, leaving the hives virtually starved of nutrition.
So it was with some consternation that the eradication program for the Asian Honeybee in the Cairns area, as well as the project attempting to eradicate the Electric Ant, Wasmannia auropunctata, was virtually terminated recently when some 40 workers associated with the program were axed. Makes you wonder what there is in the heads of these dollar-crunching administrators. The entire honey and pollination industry in Australia is now under threat. 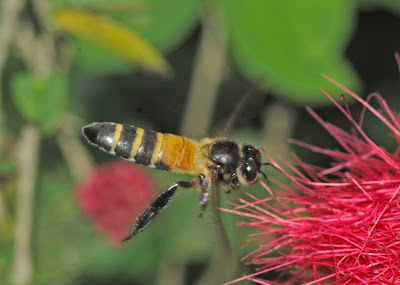 The Giant Honeybee, Apis dorsata, is half again as large as the standard honeybee, Apis mellifera. It has a prominent orange patch dorsally on the first two abdominal segments. 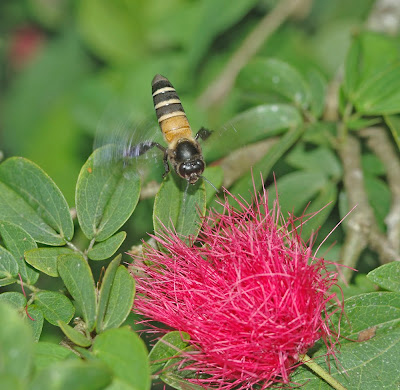 Apis dorsata nests high in trees. It is aggressive and very dangerous if provoked. This bee and has never been domesticated but the honey is gathered by native peoples where it occurs. The colony consists of a single vertical comb. The bees adopt a characteristic defensive behaviour known as "defense waving." 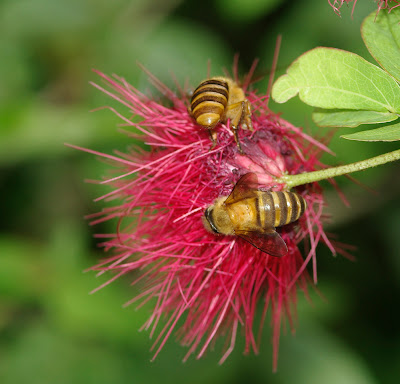 The Asian honeybee, Apis cerana is much smaller than the standard Honeybee, measuring about 10 mm in length. It is much more "nervous", for lack of a better word, than the Honeybee and much more difficult to photograph! 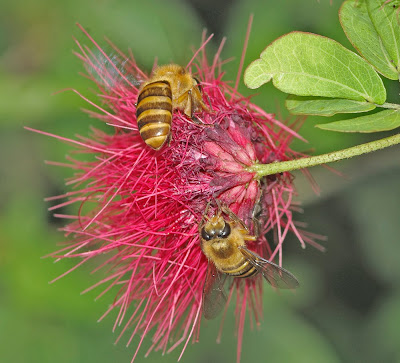 The Asian honeybee has much more distinct stripes on the abdomen than the Honeybee.
Posted by Mr. Smiley at 05:46:00

This program was run poorly from the start, the fact Brisbane Biosecurity didn’t get involved is beyond me, as a former staff member going back a few years. I can say that the guy running the show was given license to do what he wanted, yet didnt appear to have any qualifications for his position. No one seemed to realise, or still seems to realise the gravity of the situation if/when these bees spread. We are the only country in the world without the mite.