This orange-thighed Treefrog (Litoria xanthomera) is basking in the light rain. It may have a different experience should tropical cyclone Kimi make landfall near Kuranda. 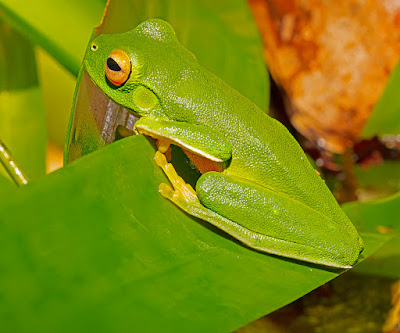 The rains have come-sort of. Adult katydids are showing up at the lights as well as on the rainforest vegetation. The first Queensland Palm Katydid was heard on the evening of 17 December.

With the Christmas Holiday Season coming on, katydids are called Esparanzas in some cultures, the word meaning Hope. Let's all Hope that this is a pleasant season with less animosity and 2021 will be better than 2020--it just has to be. 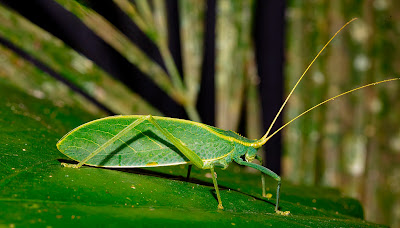 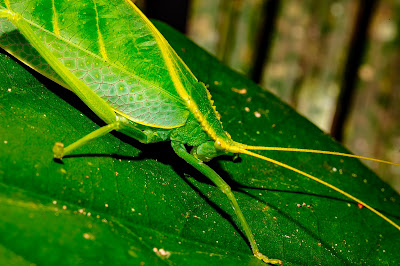 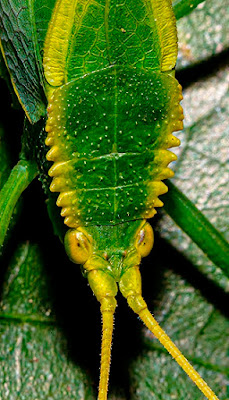 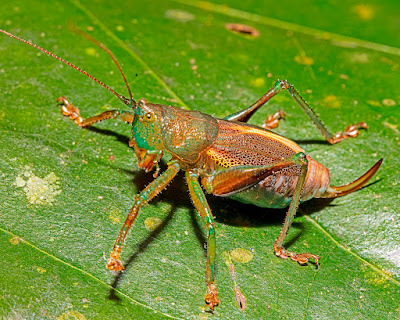 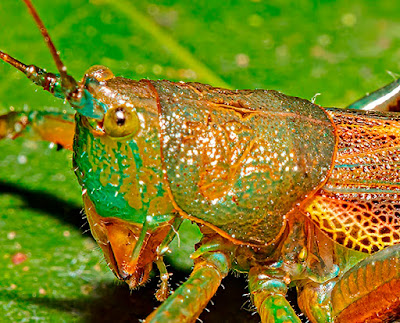 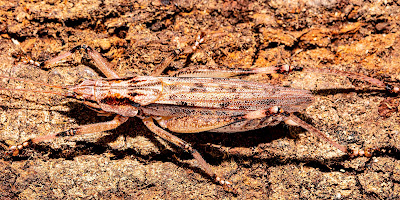 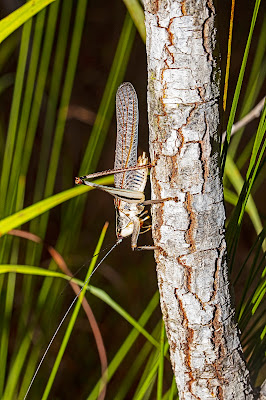 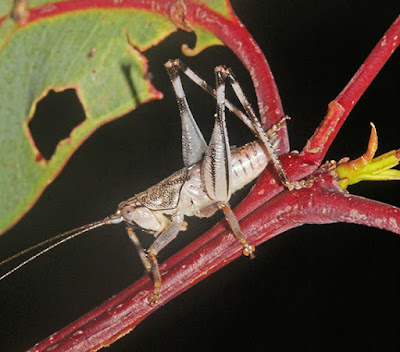 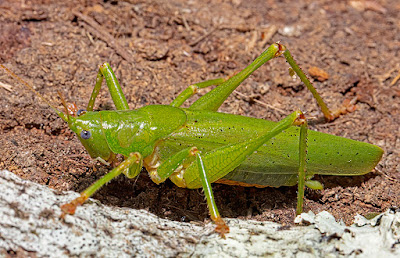 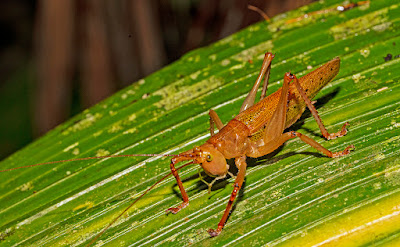 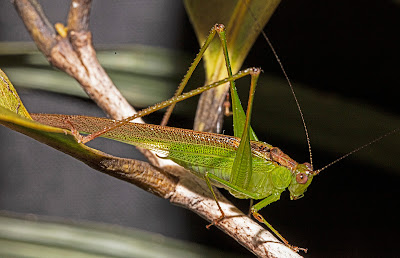 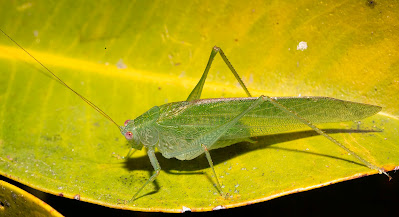 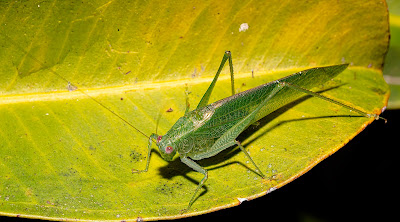 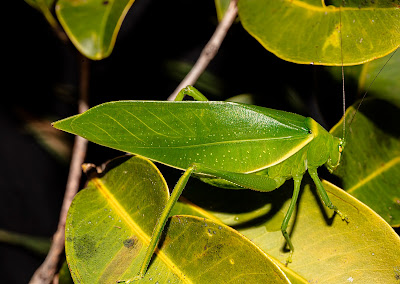 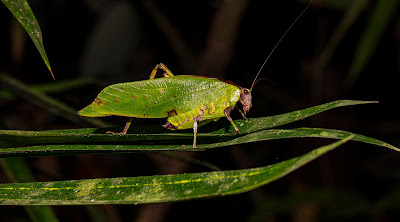 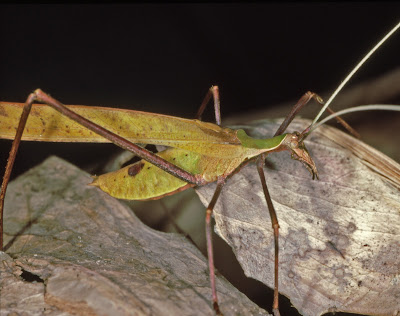 The other morning I came across this incident on our front porch. A small Brown Tree Snake (Night Tiger), Boiga irregularis (Colubridae) had captured one of the many geckos that hang around for the insects that are attracted to the lights. It is a rear-fanged snake and not especially dangerous unless you are bitten by a large (2m) specimen. This one was less than a foot long. But they have a rather nasty, aggressive disposition and will bite if threatened.

Brown Tree Snakes are common in and around rainforests where they feed on a variety of prey. Birds seem to be a specialty. One must never hang the budgie's cage out on the porch or it will surely become the prey of one of these snakes. Even if the cage is well out in the open, the snake will find a way (short of flying) to reach the poor bird. These snakes frequently enter homes through open windows and doors to wreak havoc on caged birds. 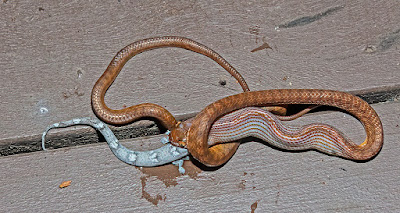 It was only a mater of minutes before the snake had consumed the lizard, head first. 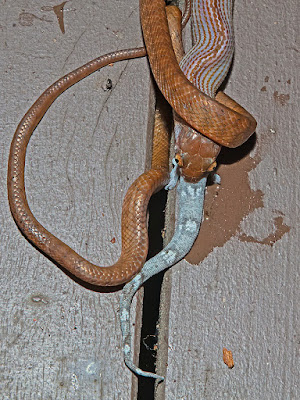 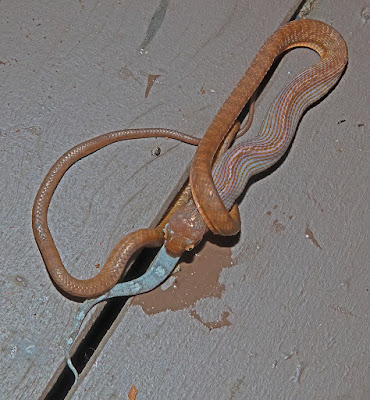 Greg Watson suggests the gecko is the Asian House Gecko, Hemidactylus frenatus. He also speculates that this may be the first feed of this young snake.

Ctenomorpha gargantua Brock & Hasenpusch, the Gargantuan Stick-Insect, is no doubt one of the world's longest insects. Females measure more than 50 cm from the tip of the outstretched forelegs to the tip of the cerci (claspers). The longest specimen known measured in excess of 60 cm. The one figured here is around 55 cm. Males are considerably smaller, measuring about 30 cm.

C. gargantua occurs along the coast in rainforests from the vicinity of Cairns and Kuranda and the Atherton Tableland south to Mourilyan, Queensland. Males frequently fly to light. They are probably abroad at night in search of females. Females are rarely encountered. The likely reason is that they are short-winged and heavily bodied and less likely to attempt to fly unless greatly disturbed. They remain motionless in the tree tops. Because of their size, they would be attractive morsels for birds and lizards should they take to the wing. (The Pacific Baza, or Crested Hawk, Aviceda subcristata, is known to have a fondness for stick insects). Attempts at rearing the species from eggs is fraught with disappointment. Males seems to be able to make it through the developmental stages, but females encounter problems moulting in the latter stages. This may be associated with diet or, perhaps, humidity. In any even, the Gargantuan Stick-Insect is one of the north-western rainforest's treasures and most people living in the rainforest probably have no idea that these giants are among them.

Thanks to Paul Brock for comments. 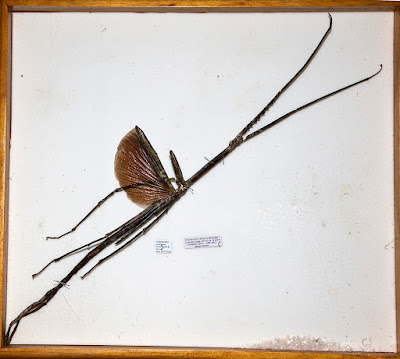 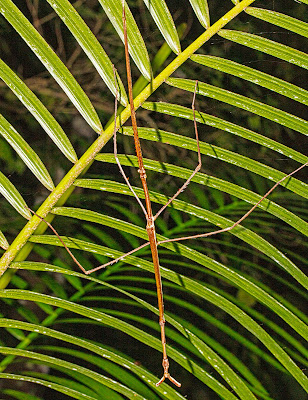 The Queensland Museum has issued a new edition of its popular Wildlife of Tropical North Queensland. Originally published about 20 years ago, the book is 50 pages larger than the first edition and is updated and a lot of additional content has been added. This  includes sections on bats, fish, crustaceans and frogs. It covers the biota from Cooktown south to Mackay, east of the Great Dividing Range.
The book has a fresh, crisp appearance.The photographs are outstanding and the colours are true. Price $A34.95--great value. 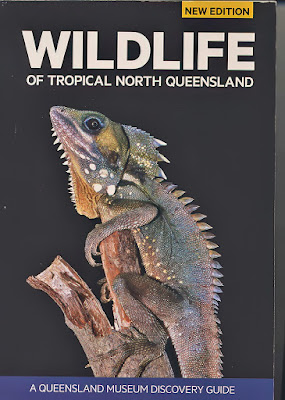 Termes on the Wing

After several weeks of dry weather, we had a nice drop of rain. That prompted the local Termes species to initiate a nuptial flight. 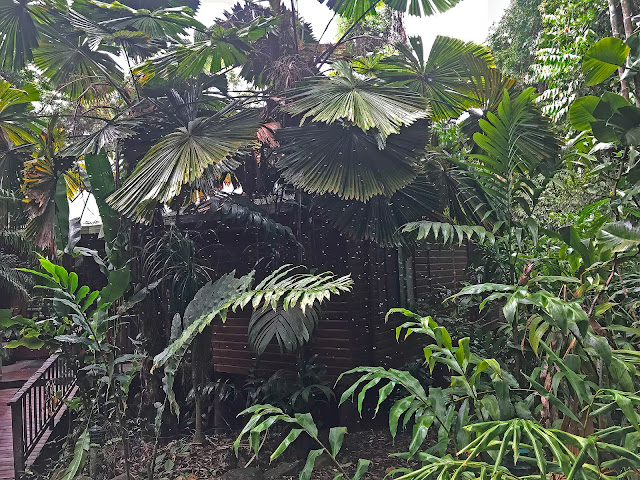 The mound was covered with hundreds of termites that took to the wing. 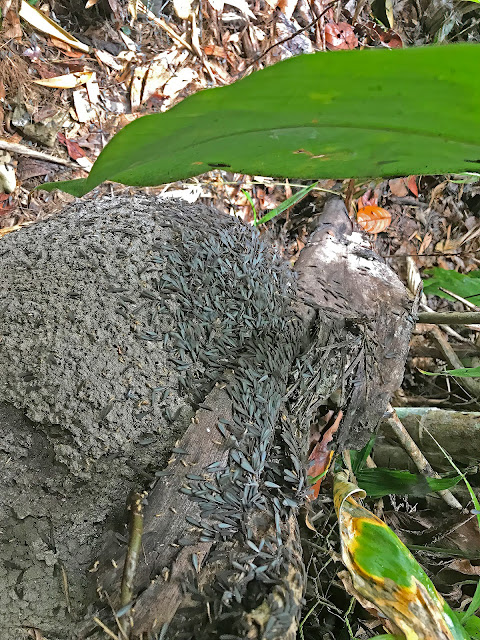 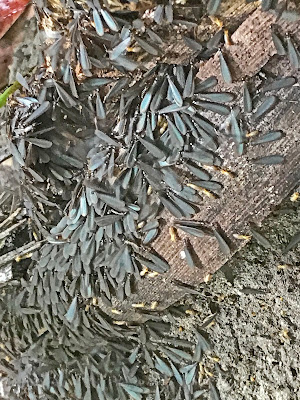 The termites were avidly eaten by birds and lizards and within 15 minutes it was all over.

On 29 September 2020 the first chorusing Northern Green Grocer Cicadas were heard in Kuranda. They are very noisy and you can hear what they sound like at: https://soundcloud.com/user166874042/nth-green-grocer