A Ballet of Forest Marbles

A Ballet of Forest Marbles

It has been a dry year in the northern Queensland tropics. But that has not held back the Forest Marbles. These peculiar plants have been dealt with before in the Blog. See: https://bunyipco.blogspot.com/search?q=Balanophora. 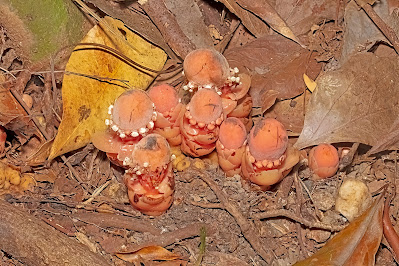 These plants are not fungi even though they have all the appearances of fungi. They are flowering plants, members of the family Balanophoraceae, Balanophora fungosa. They have no chlorophyll. About 15 species are known from India, southeast Asia and Fiji. They are parasitic on the roots of other plants. I suspect our Elaeocarpus bancroftii-the Kuranda Quandong may be the host as the largest groups of Marbles seem to around the area where there are several giant Quandongs. 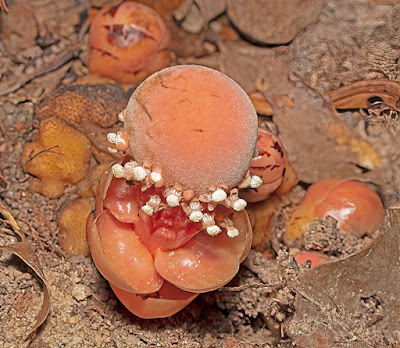 The white structures are the male flowers. The female flowers are atop the bulb and actually between the minute nubbins on the bulb. See the reference above for magnified portions of the plant. 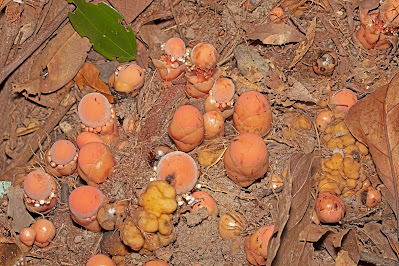 This year populations are very dense. More and more appear each day. 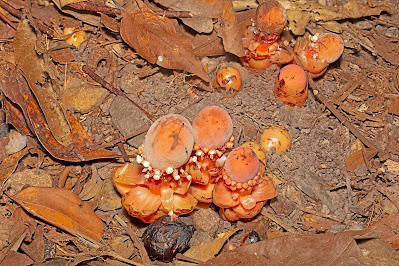 The "bloom" lasts for a few weeks and then what is left of the Marbles dry up. They are not attractive to Brush Turkeys of Pademelons. Whether Musky Rat Kangaroos have a go is not known.
Note added: Barry Muir relates that the Balanophora are probably parasites on fungi, not the tress or shrubs as previously thought. Recent research seems to confirm this. You can read his comments on this and other fungi in Cairns Fungi Foragers No. 31: August 2022.  Thanks Barry.
Posted by Mr. Smiley at 14:26:00

Excellent images - Ray Pierce has an ongoing project on this species.