While wandering around the garden one evening I noticed a white cottony blob about the size of a strawberry hanging from the leaflet of a Wait-A-While Palm, Calamus sp. I thought it was a mass of spider eggs but on closer examination it proved to be a caterpillar with its head protruding from what appeared to be its cocoon. 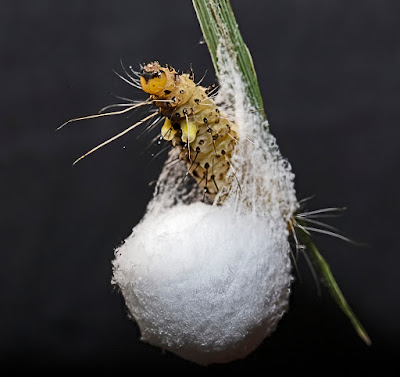 The caterpillar appeared to be struggling. It acted as if it wanted to get away from where it was but couldn't. 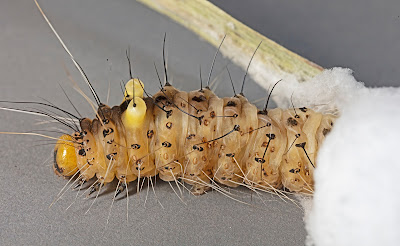 Further examination indicated that the caterpillar was in deep trouble. 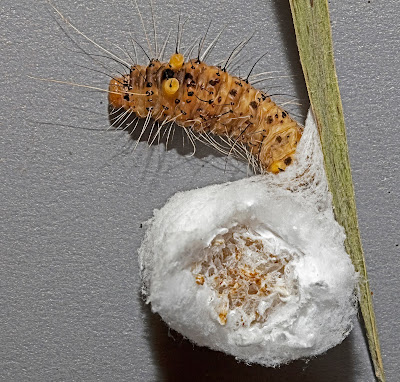 The cocoon that the caterpillar was constructing was filled with small pupae. I placed the caterpillar, which was still alive and thrashing about, in a jar and several days later the mystery was solved. 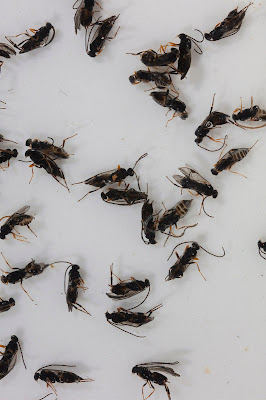 Each of the small inclusions in white mass was a small wasp. The wasps are in the family Braconidae, a family of notorious insect parasites. You have probably seen them but did not realise what they are. Many are brightly coloured and buzz around wood piles or tree bark where they seek the larvae of a variety of insects to parasitise. 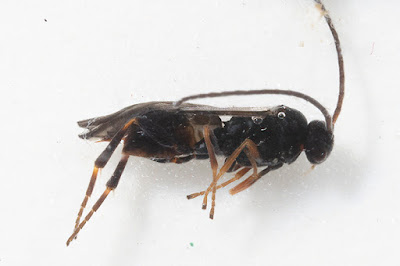 179 wasps emerged from the mass. The males measured 3.1 mm and seem to have yellow legs and antennae. Females were slightly larger, 3.2 mm, with black antennae.
Eventually the hapless caterpillar died. It probably had this load of parasites with it all its life and just at the time it was about to form a cocoon of its own, the parasites began to emerge and complete their life history.
This is a form of biological control, albeit a somewhat non-beneficial one as far as a "control" of a caterpillar that might be potential pest. The caterpillar would have spent its larval life feeding on its host plant. The "control" comes from the fact that it would not mature and, therefore, not be able to reproduced.
Braconids of many kinds have been used as bio-controls of agricultural pests. There are many example you can find on the internet.
During my early days at the University of California, Berkeley, I came across a fascinating example of a a braconid and a Ladybeetle. The ladybeetle was a very common and widespread American species, the Convergent Ladybeetle, Hippodamia convergens.
The braconid, called Perilitus coccinellae at the time, parasitised the beetle with only a single wasp larva within. When it became time for the wasp to emerge, it actually tied the ladybeetle's feet to its own cocoon. The ladybeetle remained alive. The way this works is very involved. Orange insects, like Monarch butterflies, many wasps and beetles and large numbers of bugs (Hemiptera) advertise to vertebrate predators that they are distasteful, toxic or lethal. Vertebrates of all sorts-lizards, birds, frogs and some mammals avoid dealing with orange insects. This may be a learned avoidance or could be genetic.
In the case of the ladybeetle, the plot thickens. The ladybeetle remained alive during the time the wasp was completing its development within. When danger threatened, the ladybeetle opened its wings seemingly protecting the cocoon beneath it from harm. Following the emergence of the wasp, the beetle either dies or wanders away. 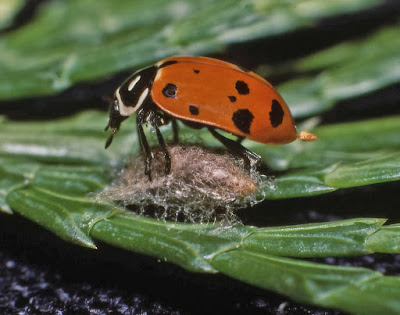 Look carefully (click to enlarge the photo) and you can see that the ladybeetle's legs are attached to the wasp's cocoon beneath it. The beetle has bee there for some time as you can see from the faeces attached to its posterior.
NOTE
Our friends Ms Bridgett Gower has come up with the name of the caterpillar. It is Iscadia inexacta and was featured in this blogspot some years ago: https://bunyipco.blogspot.com/2012/11/rearings.html. Bridgette reports that the white sacks are not uncommon on Bleeding Heart trees and her nephew calls them "sackapillars". She has provided this photo: 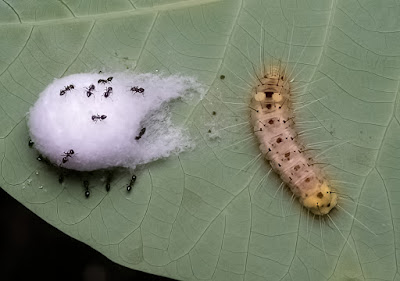