Tis the Season. So why not the Peppermint Stick-insect. It is unlike the traditional peppermint stick in that it is not red and white. Here is its story. 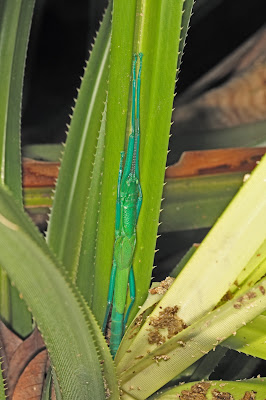 Typical resting position of a female Peppermint Stick in the mid-rib of Pandanus.

The fore and middle legs are forward with the antennae in between. Not the short forewings.

Although described over 100 years ago, these insects went unnoticed until relatively recently. My predecessor at CSIRO, Ken Key, showed me some ancient specimens in the collection from islands in the Gulf of Carpentaria but he said he had heard that the species was in the Daintree region in the far north. But nothing was known of its habits so it was with great excitement in the early '90's that I found a population in the Cape Tribulation area. I learned later that Jack Hasenpusch knew of a population at Etty Bay. 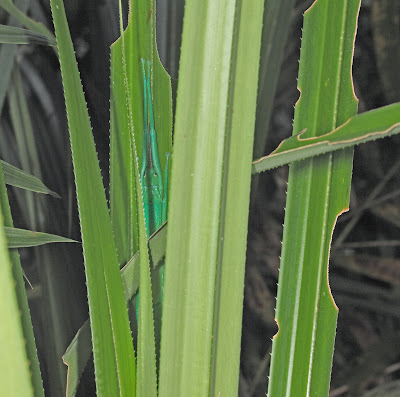 Resting in the heart of a spiny Pandanus. Note the feeding damage in the foreground. It would be a brave bird or lizard that would attempt to extract this individual.

This stick insect is associated with Pandanus. There are several species of Pandanus but this insect seems to prefer only one, P. tectarius. P. tectarius has a very broad distribution occurring along the the coast and inland for a considerable distance. So it was logical to assume that the sticks could be found elsewhere. But this is not the case. Diligent searching for many years of every Pandanus has failed to locate additional populations of the species. Where these insects occur they are numerous and the plants they live in have a distinct appearance. The leaves are chewed to the mid-rid in characteristic semicircular patterns. 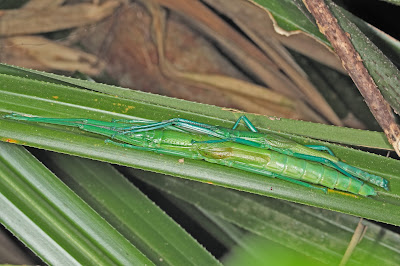 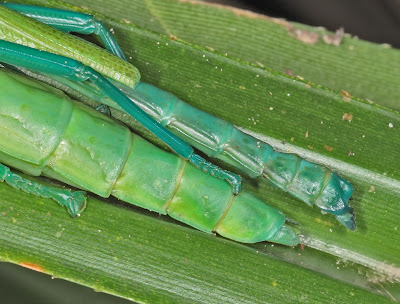 A pair of Peppermint Sticks. Note they are not attached.


The sticks have a rather simple biology. They never stray from their host plants even though they are winged and could probably fly or at least glide a bit. This species was described originally from the Solomon Islands and New Guinea and the Bismarck Archipelago. That may give some clue to the distribution of the stick.

The sticks live in the mid-rib of the Pandanus leaf. They scuttle back and forth and are highly perceptive of external activities. As soon as they detect the presence of danger, they retreat backwards into the base of the leaf protected from intruders by the spiny hooks along the sides of the leaves. They move using the fore and middle legs and use the hind legs only to move from one leaf to the other.

The droppings (frass) accumulates in the base of the leaves along with the many eggs females produce. During cyclones masses of Pandanus get dislodged and float out to sea. The sticks probably die during this time but the eggs may be safely carried to a new destination tucked in the axils of the leaves. 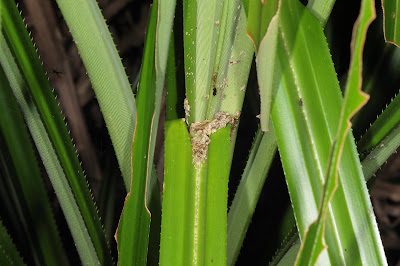 Frass accumulated inside at the base of the pandanus leaves. It is early in the season so there are few or no eggs there at this time.

An additional advantage to the stick is that it is probably facultatively parthenogenetic. That means that unmated females can lay eggs that hatch. In fact, it seems to be the case that the populations south of the Daintree region. Apparently no males have been found in these populations. 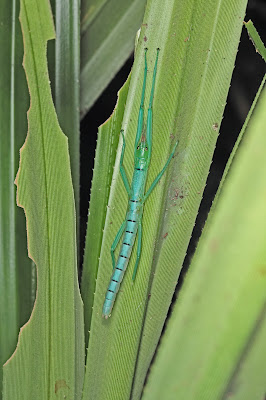 A last instar female nymph. +Note the developing wing buds of the fore and hind wings. Also note the feeding damage to the plant.

Peppermint Sticks are diurnal. They have well developed eyes and are well aware of their surroundings. When suitably threatened, they squirt a white milky substance from the corners of the thorax at the intruders. The smell is reminiscent of peppermint. Hence the name! 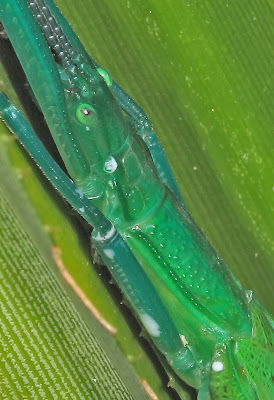 A disturbed individual. The white spots are the points where the peppermint-smelling fluid is exuded as a spray.


Seasons Greetings from the Peppermint Sticks and Bunyipco.
Posted by Mr. Smiley at 13:04:00

What a terrific insect. Wish I had known to see them when I visited the Daintree. Guess I'll just have to go again.

Thanks for this post-it was most timely! We just returned from Cape Trib. and got good photos of a pair of these, on Pandanus of course, but had no idea what they were. Very interesting!

Good one Karen. Glad to be of some use!
D

Derek and I saw these in the Solomon Islands, very impressive insects.

Great Post on an interesting Stick Insect, David.
Seasons Greetings to you, with or without Peppermint Flavouring.
Denis

I came across your fantastic blog today, I don't know how I have managed to miss seeing it before! These Peppermint Stick insects are amazing!

Thanks to you all for the comments.
D Rentz

I really had a great time stopping by your site, it gives me a lot of information. You can also visit my site, thank you!