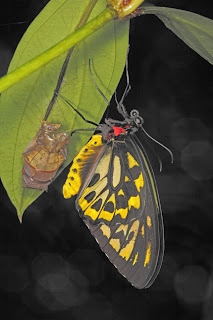 After a couple of weeks development, the chrysalids of the Northern (Cairns) Birdwing, Ornithoptera priamus (Linnaeus),  have finally emerged. Two males were the result of the three that were observed. The third one was not found and may have been taken by a predator. 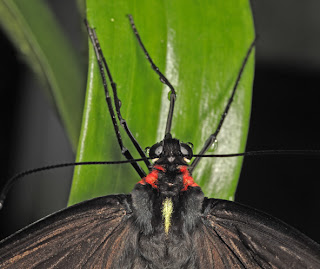 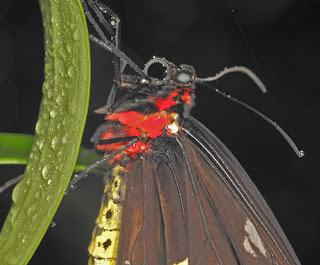 A spectacular butterfly to have in one's garden.

For more information check Michael Braby's volume 1 of the Butterflies of Australia published by CSIRO Publishing.
Posted by Mr. Smiley at 10:13:00

What a stunning creature.
Beautiful.
But you are showing off for the New Year, surely?
Cheers
Denis

That is simply awesome ... well done that man. Happy New Year and all the best - love this blog.

Most excellent. What a great new year treat.

Thanks Crash and thanks Random. Really appreciate your comments. It's wonderful to live in such a place with so much diversity.
Wish I knew the plants a bit better.

Happy New Year to you too.
D

Wow, lovely! Lucky you to have such creatures so close at hand!