Tiger Moths!
Most North American readers will have a mental image of what a Tiger Moth (Family Arctiidae) should look like. A couple of examples are included below. We have equally spectacular species in Australia but there are not many of the true Tiger Moths (Arctiinae) that fall into that subfamily. However, we have many moths in another subfamily, the Lithosiinae. The moths in this group are appropriately called the Lichen Moths. In the Kuranda rainforests we have plenty of moss and lichens and more than 20 species of lithosiine moths come to our lights. Some are quite small and do not fit the image of a Tiger Moth by a non-specialist like myself. I get several species each night at the “light sheet”. My light sheet always evokes humour when the real moth-collecting professionals visit. It’s been hanging in the same place for over 5 years and has not been washed. The usual collecting sheet is white! This one is green because there is an accumulation of lichens and algae actually growing on the sheet itself (which is actually an old curtain). Lichen Moth caterpillars often “graze” on the fields of algae on the sheet during the day.

Most Tiger Moths exude distasteful liquids when mishandled. The ultimate in this defense is seen when froth bubbles up from the thorax. 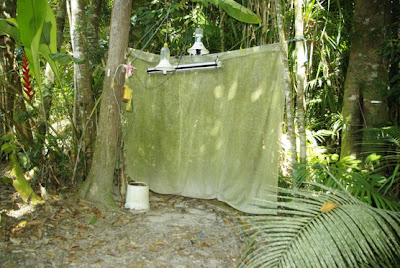 
There are several Australian sites that cater to the Lichen Moths. There is even an article documenting the use of Lichen Moths as indicators of air pollution

I have been aided by the excellent website for the identification of Australian caterpillars. Have a look.

A few typical Tiger Moths in the Subfamily Arctiinae. 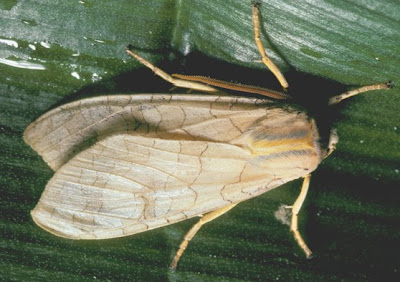 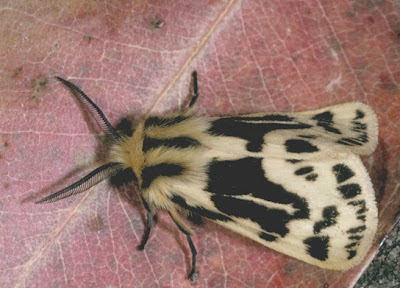 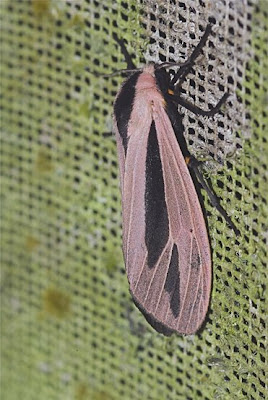 Creatonotos gangis (Linnaeus) a rainforest Tiger Moth. The describer of this species was the Swede Carolus Linnaeus as you can tell from the name following the Latin name. It's inclusion in brackets () tells the user that Linnaeus originally described this species in some other genus. Being a Linnaeus name, it was probably described around 1758 and would be among the earliest of officially-named Australian species. Amerila nigropunctata (Bethune-Baker) is one of several species of large Tiger Moths that appear at the lights. This one has large clear windows on the fore wings. Amerila alberti (Rothschild) is a sluggish species that seems quite delicate. It's behaviour belies its poisonous nature. It, and other species in the genus, and other Tiger Moths for that matter, exudes a distasteful and probably toxic substance from the thorax whe it is disturbed. 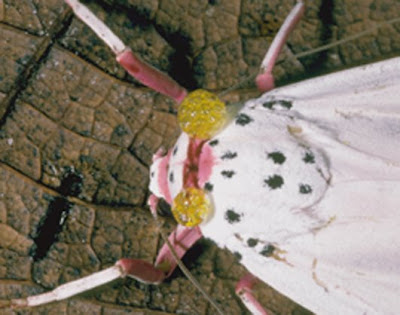 Bubbles of froth from an irritated A. alberti. 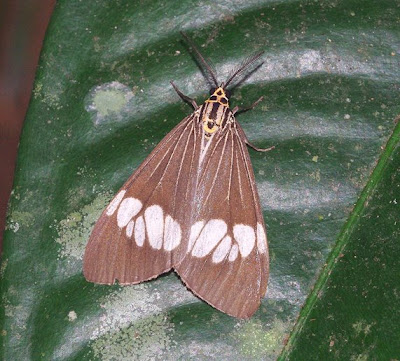 Nyctemera baulus (Boisduval) is common visitor throughout the year. It is also known from New Guinea and some of the Pacific Islands. 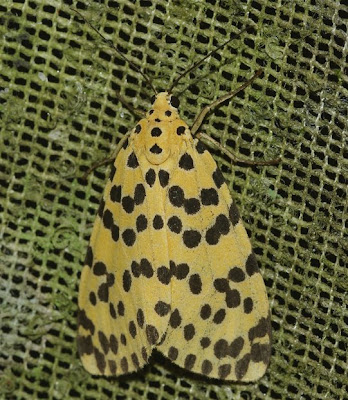 Argina repleta (Drury) is known at the Crotalaria Pod-borer. The caterpillars of this moth feed on Crotalaria pods. The moth can be common at times. It is also known from New Guinea.

We have covered some of the typical Arctiine moths. Now here are a few Lithosiines. 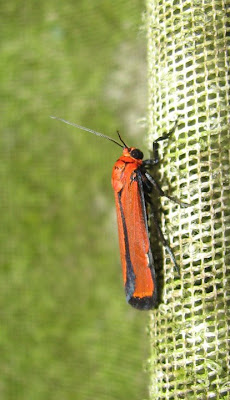 Cyana sp. is brightly coloured. There is a reason for this. This moth, and others of the Tiger Moth family, is toxic to vertebrate predators such as lizards and birds. The bright orange colour is recognised by these potential predators and they avoid eating them. Arctiid moths often stay on the light sheet all day without being annoyed by birds and lizards. And well they should be. Members of the Arctiidae are loaded with alkaloids that are very toxic indeed. Cyana is a member of a mimicry ring involving Meullerian associations. Check out the link for a full discussion and a great photo of Fritz Meuller! 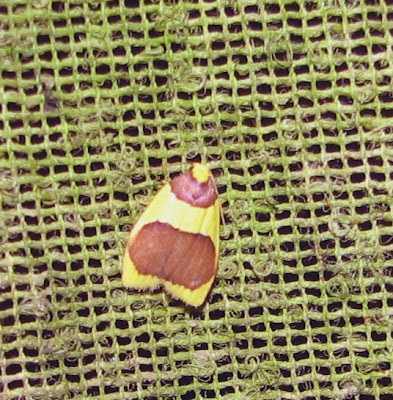 Heterallactis stenochrysa Turner is very common at our lights. It is a small species being only about 5 mm in length. 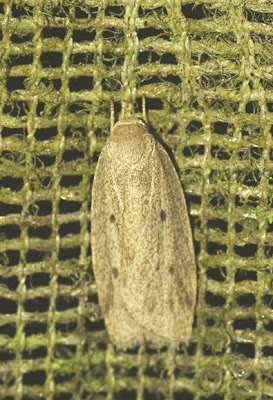 Microstola ammoscia Turner is a drab little moth that is present on the light sheet nearly every night of the year. It is a small species measuring about 8 mm in total length. 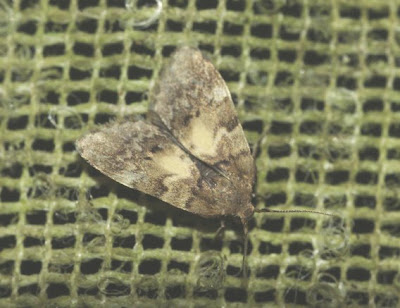 Scaphridriotis sp. is an uncommon little moth measuring about 5 mm in length. It usually perches with the wings slightly apart. Two species have been described in the genus. 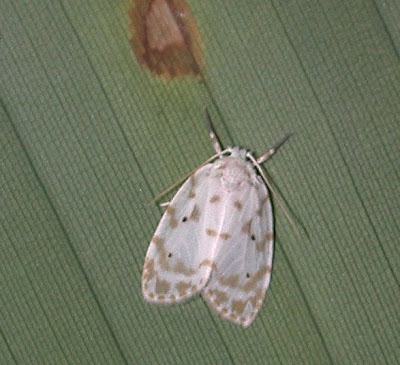 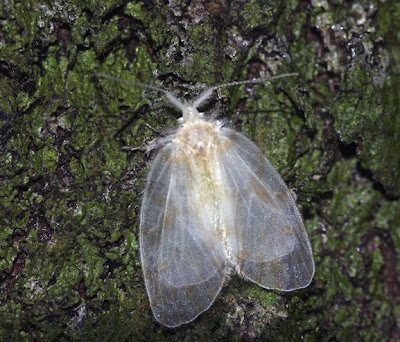 Schistophleps albida (Walker) is one of two species that show up in autumn-the end of the wet season. This April often 50 individuals can be found on the light sheet each night. These are small, delicate moths and seem to lack scales. The moths measure about 6 mm in length. You can view the peculiar larva of this species. It occurs with C. barnardi. Check the antennae for differences. 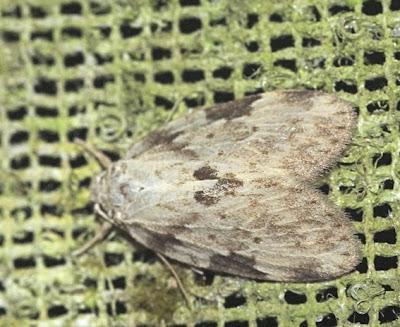 Schistophleps obducta (Lucas) is a slightly larger and much less common species. 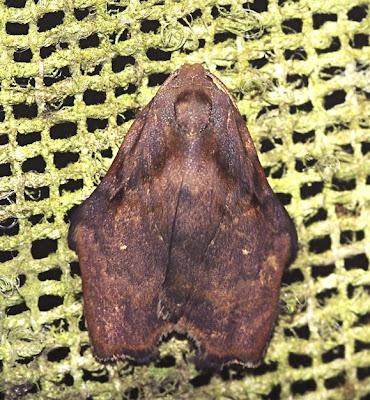 Macaduma sp. is slightly larger than the above and is rather variable in colour. It has a recognizable posture. 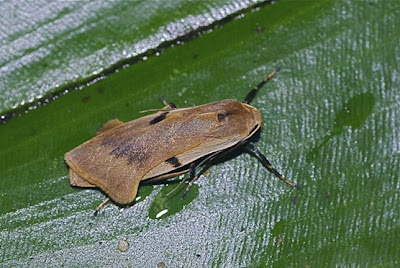 Teulisna bipunctata (Walker) is a much larger moth than some of those above. It measures approximately 15 mm and is easily ideitified by the pair of spots and the curvature of its wings. There are a number of drab grey species that resemble this moth in many ways. Most are yet to be named. 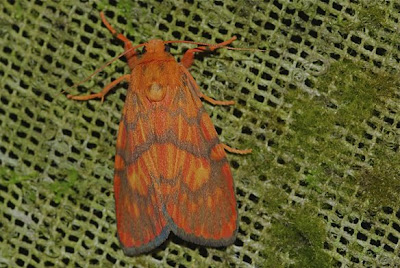 Lyclene pyraula (Meyrick) is one of the most brilliant of the Tiger Moths to visit our lights. It is always quiescent and never bothered by brids or lizards. It pays to advertise! 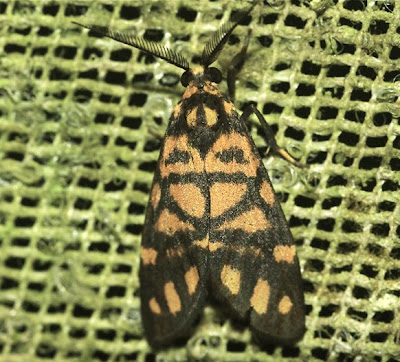 Asura polyspila Turner is well known to moth collectors in the tropics. It is a common visitor to lights. There are a number of species in the genus that differ in colour pattern. 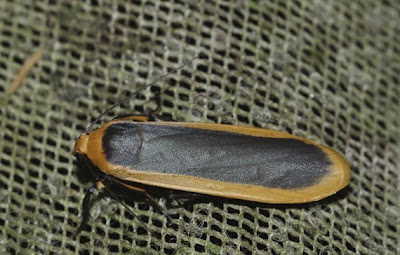 Manulea sp. is a larger moth than many of the other lithosiines. It averages about 22 mm in length. Its resting posture is distinctive. 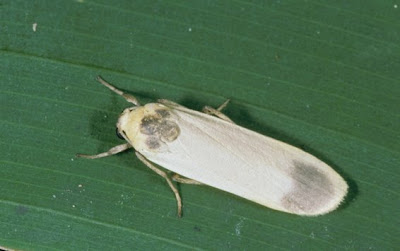 Manulea dorsalis (Walker). Believe it or not, this may be the same species as the one above. Perhaps, an example of extreme variation. 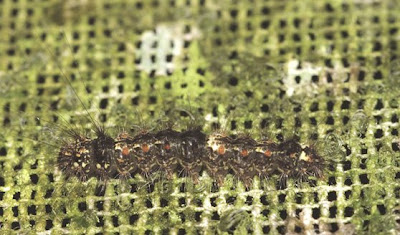 This caterpillar is grazing on the algae growing on the light sheet. Judging from the photos, it is likely to be the caterpillar of the moth above. 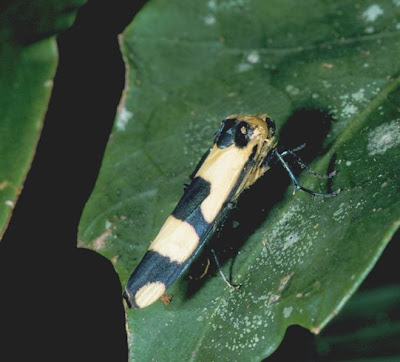 Oeonistis altica (Linnaeus) is a spectacular Lichen Moth. It usually rests high on its legs. It is beautiful when spread. This large moth measures some 25-30 mm in length. As far as I can tell, nothing is known of its biology.

Thanks to Ted Edwards and Don Herbison-Evans and Dave Britton for identifications and comments.
Posted by Mr. Smiley at 18:04:00

great write-up mate, always fun to see what adventures you've been on. I'd seen the Nyctemera baulus while staying at Ingham, theyd chosen the same plant to rest on as dozens of tiny eastern dwarf frogs, litoria fallax had chosen to call home, I doubt theyd of been able to make a meal of one!

Thanks Pete. I appreciate your comments.

Hi Dave
I have just found your blog - apologies for being a slow learner.
.
I have recently helped Bob Mesibov from Tasmania search for a long-lost Millipede near Robertson, Southern Highlands, NSW. Your name came up in our conversation.
.
I still fondly remember your radio broadcasts on 2XX of old style jazz and early blues. I also bumped into you at a CSIRO Open Day, at Black Mountain (just an anonymous member of the public - but I recognised your voice - and we chatted for a few minutes). You showed me some of the Beetle collection.
Then last week I stumbled across your name as having described the Illawarra Raspy Cricket - one of my regular visitors.
I would like to ask you about a Cricket I found with Bob last week, if you do not mind.
I will email you privately, via your profile, if that's OK with you.
I have been blogging about "The Nature of Robertson" for about 4 years now, but I know more about Orchids than insects, unfortunately.
I will also link to your Blog from mine, under a group we have informally called Aussie Nature Bloggers. It is an auto-updating link. No obligation to you. The system just picks up any new postings to your blog and shows new items on top of the list.
Cheers
Denis Wilson