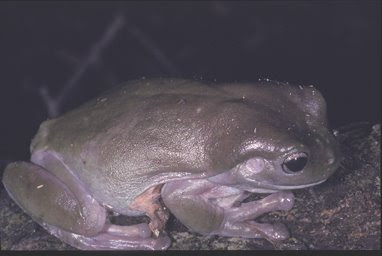 Meet Litoria caerulea (White), the Green Tree Frog. (Listen to the call of this frog at the website).This is one of the most commonly encountered frogs that a visitor is likely to meet. Many introductions to this species are fraught with anxiety because of the odd habits of this frog. Nearly every outback public toilet has these creatures living within. That’s not so unusual but to have them living in the toilet cistern is a bit off-putting to the uninitiated visitor to say the least. The frogs crouch under the toilet seat or under the rim of the toilet bowl, often in considerable numbers. If it was a small frog, one might overlook the experience. But this is a large frog, often getting to 100 mm in length. They are persistent and won’t budge. So when the perplexed human uses the toilet the next worry is "What if it jumps up while I’m in the middle of.....". And then "What happens if I flush"? Well the frogs usually stay put and don’t jump while you are in the midst of... And when you flush, they just swim around the bowl and almost never go down the drain. And if they do, they seem to crawl back and assume their perching under the rim. They will be there the next time you need to use the toilet--if you ever need to again!

In some public toilets I have seen multiple species in this role. It’s great for a frog. They have fresh water-eventually and the toilets are usually lit at night providing a great source of snacks. 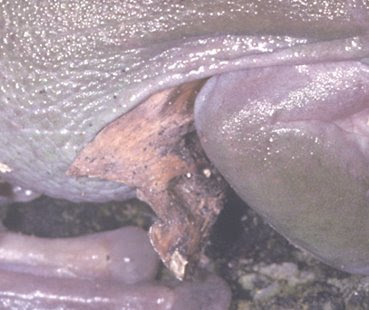 But this poor frog was photographed near our garage. Normally these frogs are grass green but this one is sick. It is off-colour. Note the “wound” between the right fore leg and the right hind leg. This is probably the exit site of a fly parasite, Batrachomyia sp. There are many species in this genus that parasitise a number of Australian frogs. The little fly on top of the Orange-eyed Frog below is one of these flies. They are members of a fairly large and diverse family, the Chloropidae. In other parts of the world they are usually detritus feeders but a parasitic habit has evolved in Australia. This just adds to the problems that Australian frogs are undergoing at present. It would be of interest to report that the flies parasitise the introduced Cane Toad, Bufo marinus, but this seems not to be the case.
Posted by Mr. Smiley at 18:09:00

Most interesting, the "Ozzie john frog". The late Michael H. Robinson told me of a lady house guest who sat on the can when his pet otter was in the water. It sounds like a stretch, but he swore it was true, and the otter reacted in a predatory mode, though no damage was done.

Thanks for both your comments. More blogs to come!

Thanks for both your comments. More blogs to come!