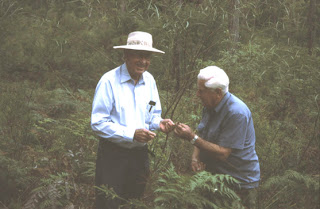 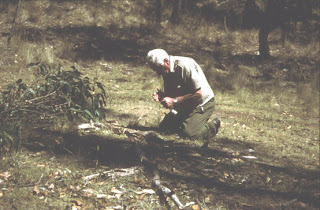 Dr. Edward S. Ross, looking under a log in the Grampian Mountains, Victoria, Australia, 1997, on one of his several trips to the continent.


Mentors
My first contact in entomology was with Dr Edward S. Ross. I had a very early interest in insect, probably as a result of my paternal grandmother’s general interest in nature. When I was 12, my father took me made an appointment, through a Mr. Bob Dempster, to meet Dr. Ross in the Dept. of Entomology of the California Academy of Sciences in San Francisco. This was to begin a life-long association that continues to this day.

Dr. Ross was feisty and opinionated but I only remember the positive advice he gave. When I, and my life-long friend Chris Wemmer Camera Trap Codger , became hooked on photography, Dr. Ross advised my mother for me to bypass the amateur stage and start out at the professional level with the best camera I could afford. That was an Asahi-Pentax. Chris’ father was into family photography and was another good source of information. Chris and I photographed all sorts of natural history subjects. We were told “only to use Kodak film”. Other cheaper films probably would not last very long was Dr. Ross’ comment. To that end, decades later, when he was asked to submit a series of photos for the CD-ROM “Insects Little Creatures In A Big World” for the CSIRO, amongst those I selected was a perfectly good slide of a skipper butterfly that he had taken in the 1950’s. His book “Insects Close-up” if not the first, was one of the first books on insect photography.

Both Bob Dempster and Dr. Ross thought I should join the Student Section of the California Academy of Sciences. This was a Department of the Academy that catered to the specialised biological and geological interests of students in San Francisco. I was eager to join and met many similar-minded students from the city that I would never had had the opportunity to meet. A very high percentage of those students went on to higher achievements in biology and geology in many parts of the USA and beyond. Many of the friendships I made there continue to this day.

When it came time for me to think of university, that decision was not difficult. Dr. Ross told my parents that the University of California, Berkeley was the number one place in the USA for entomological training. It was just a short ride away from San Francisco. I went there for 10 yrs!

Dr. Ross has mellowed over the years and is in his mid 90’s now. He continues publishing papers on his pet entomological interest, the Embidina, the Web-spinning insects. He feels he needs another lifetime to adequately finish the job. I hope to have a future Blog on these fascinating insects. Over the years Dr Ross has become known for his photographic expertise covering many fields from nature to anthropology. He has published many articles in journals and magazines and has major contributions to books in several fields. His entomological wanderings have taken him to all continents and he has been largely responsible for building the enormous insect collection housed at the California Academy of Sciences in San Francisco. Boy am I lucky my father followed Bob Dempster’s advice.

Ross, E. S. 1953. Insects Close up A Pictorial Guide for the Photographer and Collector. University of California Press, Berkeley, 80 pp.
Posted by Mr. Smiley at 13:03:00