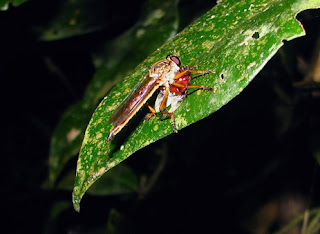 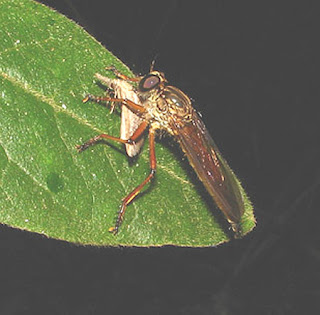 
Robber Flies (family Asilidae) are well known to all entomologists. More than 7000 species are known from almost all continents and habitats. They are very distinctive in gestalt and range in size from 5 mm or so to some real giants at over 40 mm. Many mimic other insects are frequently found on flowers where they ambush unsuspecting prey. They are hairy and have long, strong legs suitable for catching and holding prey. Their large eyes and the concave groove between them serve to distinguish the family from others that look similar.

There are a number of websites that deal with Robber flies with many providing excellent photos.

For a couple of years I have encountered Robber Flies at night while wandering around the rainforest. At time they were with prey. I wondered if they were nocturnal but thought they might just be stirred into action by the light of my torch or, perhaps, by moonlight. But on the night of 12 December 2007 while walking around Lake Barrine, north Queensland with Darryl Gwynne, multiple encounters with robber flies with prey were observed. We were deep within the forest and the moon was in its crescent phase, so there was virtually no ambient light.

Consultation with several Robber Fly aficionados suggests that nocturnal behaviour is unknown in this group. In fact, Wood (1981) suggests that they are seldom found deep in the woods and are active in bright sunlight. Sure, some are always attracted to lights at night. The lights are assumed to “wake” resting flies in the immediate vicinity and attract them. But this could not have been the explanation on the night we made our observations. Of the dozen or so sightings, all had captured nocturnal insects further suggesting they were on the prowl in the dark.

Once the species illustrated is identified, I’ll add that to the blog as well as any future observations.

Seriously cool flies, indeed. I' ve collected several species in two subfamilies from around the house -- most are drowning casualities. I well remember an encounter of the asilid kind on a sunny fall afternoon in Virginia. A mossie was in my face, I saw a glint of reflected light about 30 feet up, and then asiliraptor power-dived and snatched the mossie. It sounds like fiction, but it's TRUE!

Your observations prove its worth wandering around the woods at night despite the presence of "poisonous snykes". LOL

Thanks for the comment. And those robbers can bite if they are not held properly. Thanks for your help.