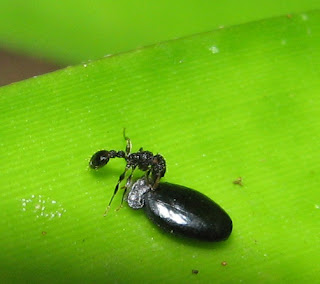 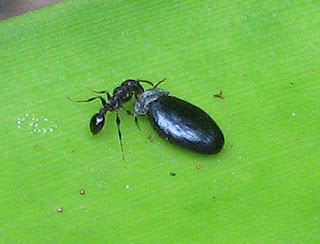 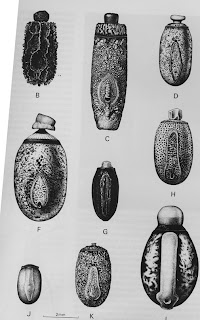 Entomologists don’t observe this sight very often. It’s a small ant attacking what appears to be a seed. Some ants harvest seeds for various reasons. Some harvest grass seeds for food others harvest acacia and other seeds for the elaiosomes (oily, nutritious bodies) that they bear. This is called myrmecochory or co-evolved mutualism between ants and plants. Over 1500 species of Australian plants have been shown to be myrmecochorous. Myrmecochorous (A new word for your next Scrabble game!) plants bear bodies that aid in the dispersal of the seeds. In this example I found what looked like a seed bearing an elaiosome. Elaiosomes attract some ants and they harvest the seeds just for the elaiosome. In so doing they carry the seeds to their nests and remove the elaiosome and then either leave the seeds in the nest or take them away for disposal. This seems to be a phenomenon more common in Australia than elsewhere. Seeds bearing elaiosomes are usually tough and are not themselves damaged by the ants, but they may be scarified during the ants’ snipping process. This plus the “protection” afforded the seeds in the ant nest may contribute to the germination of the seeds.

Although of biological interest, this photo is of more interest to me than meets the eye. You see, the eggs of many stick insects are thought to resemble plant seeds with elaiosomes. At first, I thought I may have made a direct observation of an ant harvesting a stick insect egg. But further examination revealed that it was, in fact, an acacia seed from an adjacent tree and not a stick insect egg.

The modified plate from the textbook “Insects of Australia” shows a group of stick insect eggs (species distinctive in morphology) and their caps or opercula. These opercula are thought to resemble elaiosomes of seeds. It is thought that ants can be deceived by the eggs’ resemblance to seeds and take them to their nests. This serves as a form of dispersal for the stick insect eggs, thereby serving to move the stick species to different habitats. This may afford a degree of protection for the stick eggs from parasites and predators. It may be relevant that some stick species mimic ants in appearance and behaviour in the first instar stage. This may help them to escape their hosts once the eggs hatch.

For more information on myrmecochory see chapter 3 of the "Insects of Australia".

Any idea how someone in the field can tell the difference between a seed and a stick insect egg?

Not really, If you are familiar with stick insect eggs, you can probably tell. Also check around on the ground and see if there are numbers of seeds. Acacias seem to produce seeds at the same time and there are usually number of them around.