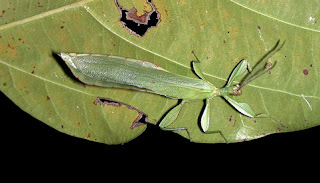 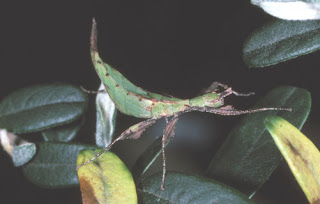 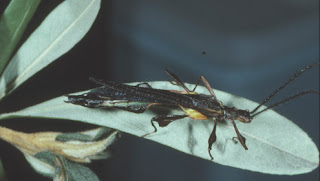 Nanophyllium pygmaeumRedtenbacher--Adult. The same individual as above. Quite a change!

Leaf Insects (family Phylliidae) are among the best examples of camouflage. They range in size from about 3 cm to some real giants 11 cm or more. They are not uncommon in the Old World tropics in places like Malaysia and Thailand. But they are oddities in Australia where only two species are reliably known and one is not really very leaf-like. They are unknown in nature in the New World.

Leaf insects are closely related to stick insects (walking sticks for those in North America). In fact, they were considered in the same family until recently when the group has gotten some real taxonomic overhauls from a number of enthusiasts.

Stick and Leaf insects are very popular pets in many countries, especially those in the northern hemisphere where they are commonly sold in pet shops because they are relatively easy to keep, have interesting habits and don’t require much space. There is even a Society of amateurs and professionals called the Phasmid Study Group. You can find a wealth of information on Stick and Leaf insects from all over the world and how to keep, breed and maintain them in culture. You will be surprised at the activities of this group and how much has been learned about the biology of these insects just by keeping them alive and watching them in captivity.

But I digress. Of the Phylliidae known from Australia, Phyllium monteithi Brock & Hasenpusch was described only in 2002. It is known from only a handful of specimens. Described from Mt Lewis, Queensland, it was not too surprising to find it here in Kuranda which is not that far away from Mt Lewis as the crow flies. Males are attracted from time to time to the “black light” and sheet. They are always on the move and don’t stay long. They seem to be forever attempting to move upwards, a habit that indicates a tree-top existence. In captivity, they always seek the top of the container. Females have never been seen here. It is assumed that they don’t fly and remain well off the ground in the tree-tops. A number of other species have been kept in captivity for a number of generations but they are considered difficult and a real challenge for the hobbyist.

Nanophyllium was a different situation altogether. It was found in the Iron Range of far North Queensland while on a fieldtrip with CSIRO in 1986. I was beating low-growing vegetation in the rainforest one morning and a small green nymph fell into the net. With some excitement I determined it was a Leaf Insect but very small. It was living in a small, isolated sapling under a dense canopy of larger trees. I gently placed it into a container for transport back to Canberra to rear to maturity. We stayed in the area for almost two weeks and that was the only example that we found. The nymph was kept alive offering it a variety of shrubs to eat and it was discovered it preferred Pyracantha , an introduced ornamental shrub. All the time I expected that I was raising a Phyllium species. So it was with some excitement and perplexity to discover that it wasn’t a Phyllium at all. That was not the entire story but just the beginning. What appeared to be a stout, flat leaf insect, developed into an elongate, wasp-like insect. But what was it?

A check of an old tome by the Austrian entomologist Josef Redtenbacher published in 1907 revealed that I had found a member of a small genus and species originally described from Katau, New Guinea, Nanophyllium pygmaeum Redtenbacher. A check of various Australian collections revealed that Geoff Monteith had collected some nymphs of the species from the Iron Range in 1976 but they were not identified as such.

But that was not the real interest of the discovery. The two photos shown here of the species are of the same individual. As a nymph it was greenish and flat and had very short bead-like antennae. It had all the appearances of a female leaf insect. It moulted several times, each time getting a little larger and consuming its skin after each ecolsion. But with the final moult came the big surprise. The nymph changed from being flat and leaf-like to elongate and black with very long antennae and behaving in a wasp-like fashion. It was continually on the move flying and attempting to always move upwards. It lived about 27 days before it died.

Mr T. James of the Phasmid Study Group informed me at the time that Phyllium leaf insects produce non-adhesive eggs that are randomly broadcast by females. I guess they land on the ground and when they hatch the nymphs seek to ascend trees as do other sticks. My specimen selected the wrong tree! Not only was I to find it but it was a small tree isolated from others and it seemed doomed there unable to ascend into the canopy.

This is still the only known adult of the species from Australia, probably because few people with the interest ever collect in the Iron Range. Iron Range is well known to biologists because it harbors a number of plants and animals that are found nowhere else in Australia. Many are shared with New Guinea and others are just plainly unique to the area.

This was formally presented in the entomological literature in Rentz (1988).

A third species was recorded in the literature as late as 2002 by Brock & Hasenpusch. It is Chitoniscus lobiventris (Blanchard). There is a record in the Cambridge Museum of Zoology labeled August, 1903 and collected in Cairns. This could possibly be mislabeled because the species is otherwise known from the Solomon Islands. But with the situation described above, the record could be authentic so we are still looking!

Thanks to Paul Brock for comments.

Very interesting. You just never know what's out there, and obviously it pays to beat around the bush if you're a entomologist.

David there is serious trouble at the San Francisco Zoo. Are you aware of it? Your expertise and experience may really be valuable.

The Phasmid Study Group has a new website with lots of interesting information on phasmids.