What 24 Mega Pixels Can Do

On a recent trip up the road to the mixed eucalypt-acacia woodlands I was wandering about at night with my camera and saw a familiar site. A pyralid male was signaling. I am familiar with sound-producing pyralids because of the encounter with Syntonrarcha iriastis Meyrick. This moth has been observed and written about by Gwynne and Edwards (see below) from observations made in Kings Park, Perth.

I have picked up stridulating moths with the mini bat detector on a number of occasions. This time I was far away from my detector but thought the moth must be producing sound, so took a photo and collected the male. It turns out that it is Symmoracma minoralis (Snellen), another pyralid. It also has been extensively studied by Heller and Krahe from observations made in Malaysia. This moth ranges from northern Australia to Sri Lanka.

The purpose of this blog is not to go into detail about the sound production of this moth but to relate how wonderful digital photography can be. Details of sound production and its function in moths can be garnered from the paper above and the one below.


S. minoralis stridulating in the field at night.
The same photo enlarged showing the genitalia, opened and revealing the stridulatory apparatus.
The same photo more greatly enlarged showing the genitalia. The ribs are not part of a file-scraper system. According to the hypothesis of Heller and Krahe, the system produces sound as a tymbal through muscular contractions with the white opening acting as a sound chamber. Contractions cause the sound! The other moth, S. iriastis, seems to produce sound in a similar fashion but has very different structures to do it. 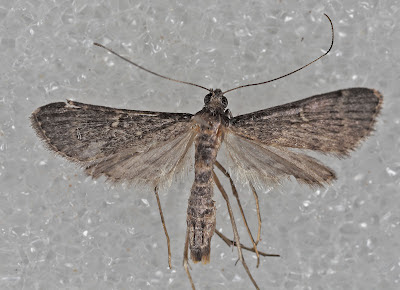 S. minoralis, the moth pinned and with the genitalia retracted. A rather plain moth with a fantastic biology.

The power of mega pixels!

Wow, sound producing genitalia! The only other case that comes close to this is the popping sound of the coral snake's cloaca. Fantastic photos and a very neat find, me mann!

Fantastic photos, DR. Trust an insect to think of something different to do with its genitalia.